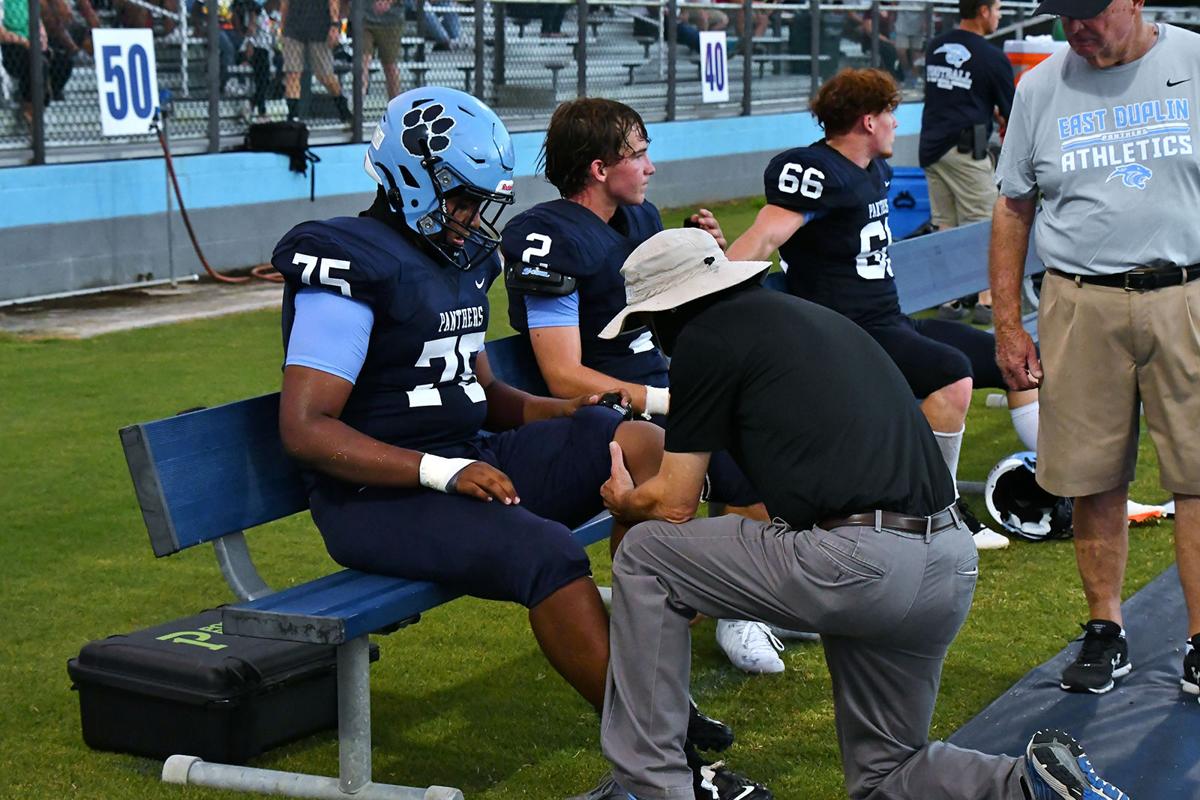 Dr. Danny Pate has worked at East Dupin football games for 37 years “and I’ve probably only missed five or six games,” he said. 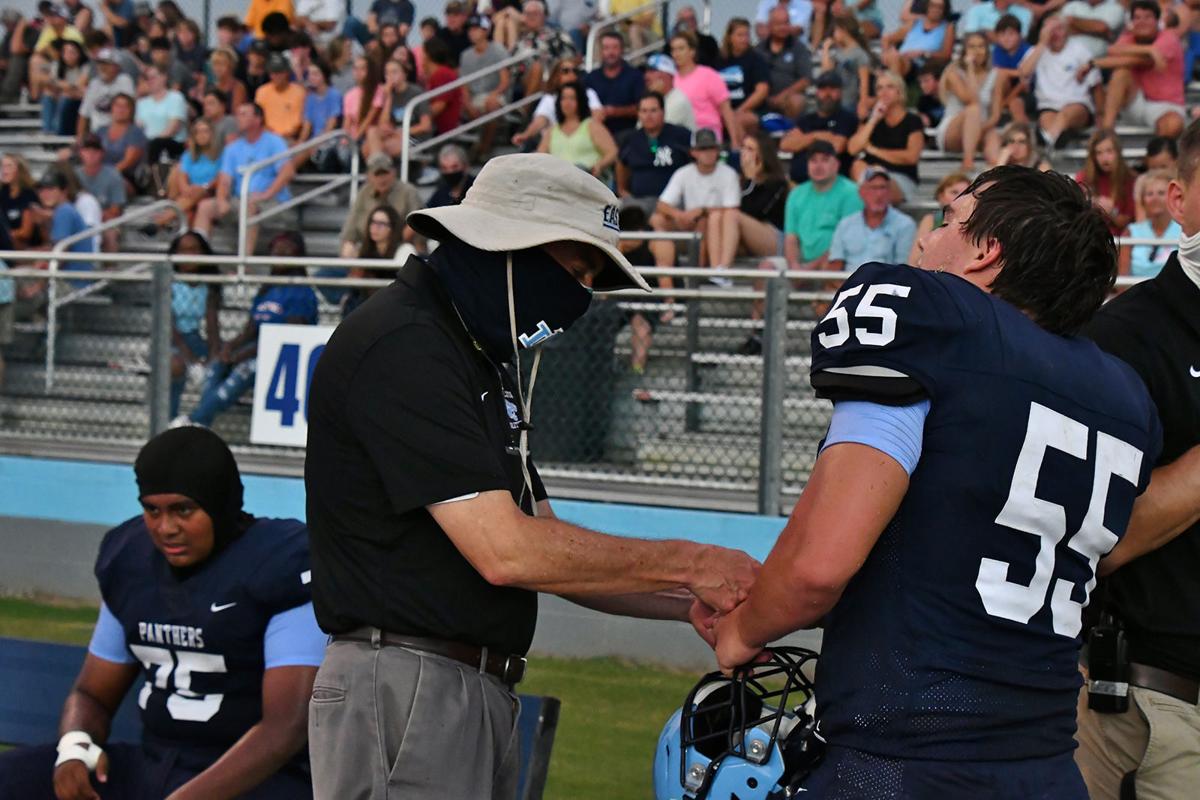 Dr. Danny Pate has been on duty at East Dupin football games for more than three decades. 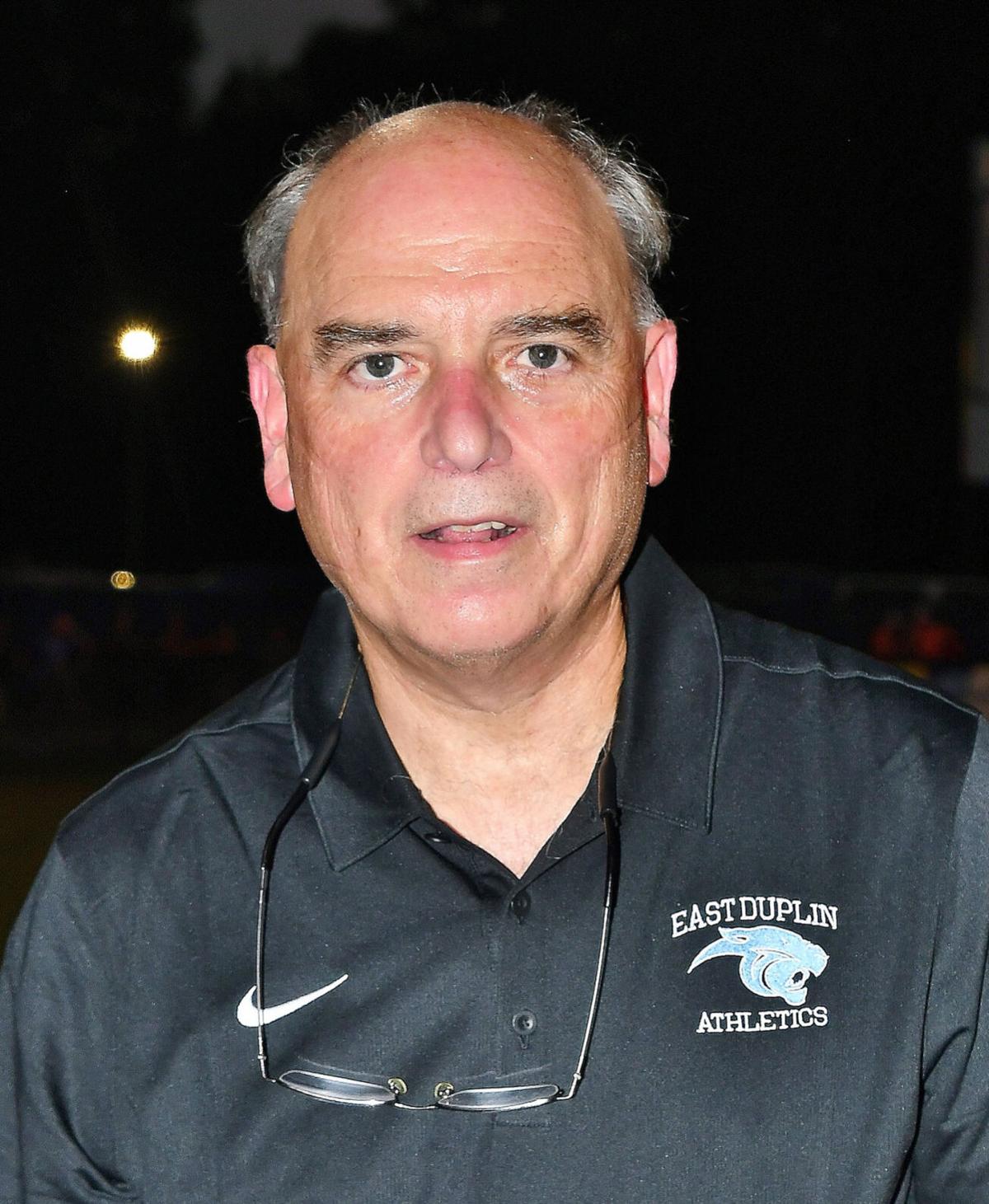 Dr. Danny Pate has worked at East Dupin football games for 37 years “and I’ve probably only missed five or six games,” he said.

Dr. Danny Pate has been on duty at East Dupin football games for more than three decades.

BEULAVILLE — Anyone looking for Dr. Danny Pate on a Friday night in the late summer to late fall knows he’s on duty at East Dupin football games.

He’s been a sideline staple there for more than three decades.

“Thirty-seven years and I’ve probably only missed five or six games,” said the 65-year-old physician. In his regular job, he helped Duplin Vidant Hospital during its merger with the larger hospital in the parent company in Greenville when he was Chief of Staff during a 14-year-period.

Last Friday night was a rather calm one for Pate and first-responder Michael Cottle as they had to go onto the field for an injured player just once — while also attending to players from their sideline “office.”

Pate’s had much crazier Friday nights and can re-tell an amazing number of those stories with vivid detail. Sometimes he was helping the opposition.

“There was a game in ‘87 against Western Harnett and they had a huge tackle name Eric Swann, who played in the NFL (the sixth overall pick) and quarterback Slade Brown was a senior,” said Dr. Pate. “Well, we were beating the socks off them and the game had to be stopped because they had so many players injured that we were out of ambulances. That was during Brian’s (Aldridge) first big run and the game was called with seven minutes to go.”

While last Friday’s East Duplin-Princeton game was a physical war between the hash marks, there were few injuries or concerns.

The biggest fear for moms and dads everywhere is seeing their son laid out on the sod, often motionless.

“Some years you have just a freaky amount of injuries, almost like you are rolling the dice. But in general, the schools with better conditioning and strong weight programs have fewer injuries,” Dr. Pate explained. “Great teams hit hard and don’t seem to have as many injuries.

“In 2017, when Wallace-Rose Hill and East Duplin both went to the state finals, there was nothing major during a tough football game where they hit hard every play.

“It’s really amazed me that tough programs are less prone to injuries because of their training. Where you tend to find bad injuries the most come during mismatches.”

Yet it is a form of work Dr. Pate doesn’t mind working off the clock.

“I’m paying back from what was given to me, plus a part of where it’s fun to be a physician,” he said. “I deal with chronic illness and problems with older people most of the time in my private practice. This is a release of sorts but it’s also home here.”

Dr. Pate and his wife Nancy, a former nurse, raised four boys who attended East Duplin, three of whom were heavy into athletics. But unlike most other dads who coached their sons, he never left his post as team physician when they graduated.

So exactly why does Dr. Pate sacrifice his Friday nights and other time when needed for the Duplin school?

It’s likely because of his strong connection and his family’s history in education and sports.

Dr. Pate played quarterback on one of the few winning football teams at East Duplin before the arrival of Aldridge in 1985.

Coincidentally, another doctor came from the same class, Dr. Paul Bolin, who now specializes in helping patients with kidney problems.

“We went 6-1-1 in the conference (in 1973, 6-3-1 overall) but back then only the conference champ went to the playoffs,” said Dr. Pate. “I’ve always felt that laid the foundation for what was to come in the Aldridge years and now during Battle Holley’s years.

“But what it also did was, show that hard work and dedication pay off. It was a great learning tool for life, and I’ve always said at the base of a foundation that helped me get through tough times during my 11 years of training to become a physician. There are times in both arenas when you have to pick yourself up and go on during tough times. That’s football in a nutshell.

“The best compliments I ever get come from players who return and say, ‘I am so thankful for all that you’ve done for me and others.’ I’m not sure it gets any better than that.”

Dr. Pate’s father, Paul Sr., taught school for 17 years before venturing into insurance. His grandmother Phoebe Pate was in education for 40 years.

Both were beacons of light on both his past and future path.

“Tremendous inspirations and I am a big fan of education,” he said. “We cropped tobacco and then went to school, which also gave us a framework to be successful in life.”

Dr. Pate is cutting back on “hospital work” as he attempts to ease into retirement, yet still has a problem understanding how people in Duplin County have refused to take a vaccine for COVID-19 a pandemic that costs schools and students “normal” opportunities the past year.

“I don’t understand why people do not trust science,” he said. “Nearly 60% of North Carolina is vaccinated and our numbers are around 30%

“The stress on our healthcare workers is tremendous. They’re all tired, and the hospital is trying to rebuild its oxygen supply. It’s the fourth round of this for them. And there’s been some apathy there because they feel like this last round did not have to be that bad, had we done things right, like vaccinations.”

Most people have a hard time remembering a crisis like the COVID-19 pandemic. Dr. Pate has heard part of this story before.

“My dad was 16 in 1944 and finishing school in Beulaville and he would tell me during World War II there were no sports, no gas to go anywhere because of rationing, no extras in life. They just woke up and went to school.”

His old-school moment in time paints a vivid picture of the advanced opportunities young people have had in the past two decades.

Dr. Pate said East Duplin is ahead of most schools in that they have science teacher Heather Houston, a certified athletic trainer, and first responder Michael Cottle, who also teaches at the high school.

“We’re blessed to have a team to deal with sports injuries and concerns,” he said.

“I so enjoyed my athletic experiences that it’s fun to try to get a player with a turned ankle ready for next Friday night’s game,” he said. “I love the environment and the opportunities it offers players and everyone associated with it.