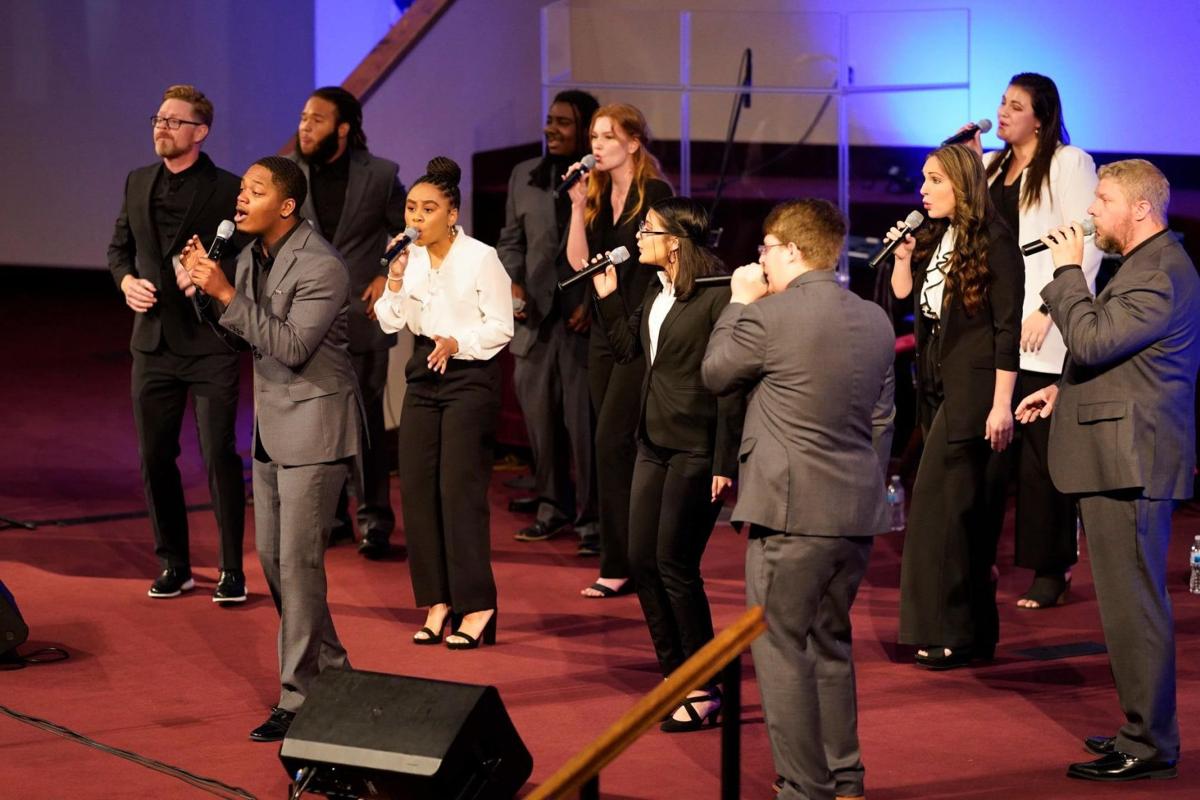 Carolina Sound is starting its third year at the University of Mount Olive. The 14-member acapella group performs at events and venues from the East to the West Coast.

Carolina Sound is starting its third year at the University of Mount Olive. The 14-member acapella group performs at events and venues from the East to the West Coast.

MOUNT OLIVE — The University of Mount Olive’s acapella group, Carolina Sound, has released a new CD. The CD features a mix of original selections, current modern worship tunes, and some older songs that the group has put their own spin on. “Big Fish,” for example, is a tongue and cheek look at the Jonah and the Whale conversation.

“In the song, the whale is actually the world,” says Carolina Sound Director Lester Rector. “The song talks about finding yourself in the belly of a world gone bad.” The catchy lyrics, which refer to being one brick short of a load, one fry shy of a happy meal, and one shot short of a bullseye, are relevant and relatable. “The underlying message of the song is really asking, ‘are you running away from God, when you should really be running towards him?’” Lester relayed.

According to Rector, there are many unique moments in the CD. The song “Through it All” was created and arranged exclusively for Carolina Sound by Derrick Johnson of Epcot’s Voices of Liberty in Disney World. Rector’s favorite song is from the album title, “I will follow.” “It is based on the book of Ruth,” he said. “It really sums up the message we are trying to get across through our ministry, in that God wants to be actively involved in your life and His plan for you is better than your own. It urges listeners to seek and follow Christ.”

Carolina Sound is starting its third year at the University of Mount Olive. The 14-member acapella group performs at events and venues from the East to the West Coast. They have both a Christian and a secular set. Rector notes that the secular set, aimed at schools, promotes important topics such as anti-bullying, appreciating yourself, abstaining from premarital sex, etc. “Carolina Sound was designed to be a recruitment group,” Rector said. “There is a level of excellence in what we do that directly reflects back to the University.”

According to Rector, Carolina sound is looking forward to touring in schools this fall and upcoming spring. To book the group, go to their website at https://umo.edu/carolinasound/. Their CD is available for purchase on Google Play, iTunes, and Spotify.

Editor’s Note: This story was contributed by the University of Mount Olive. UMO is a private institution rooted in the liberal arts tradition with defining Christian values. The University is sponsored by the Convention of Original Free Will Baptists. For more information, visit www.umo.edu.

The Duplin Times may be reached at duplinnews@ncweeklies.com