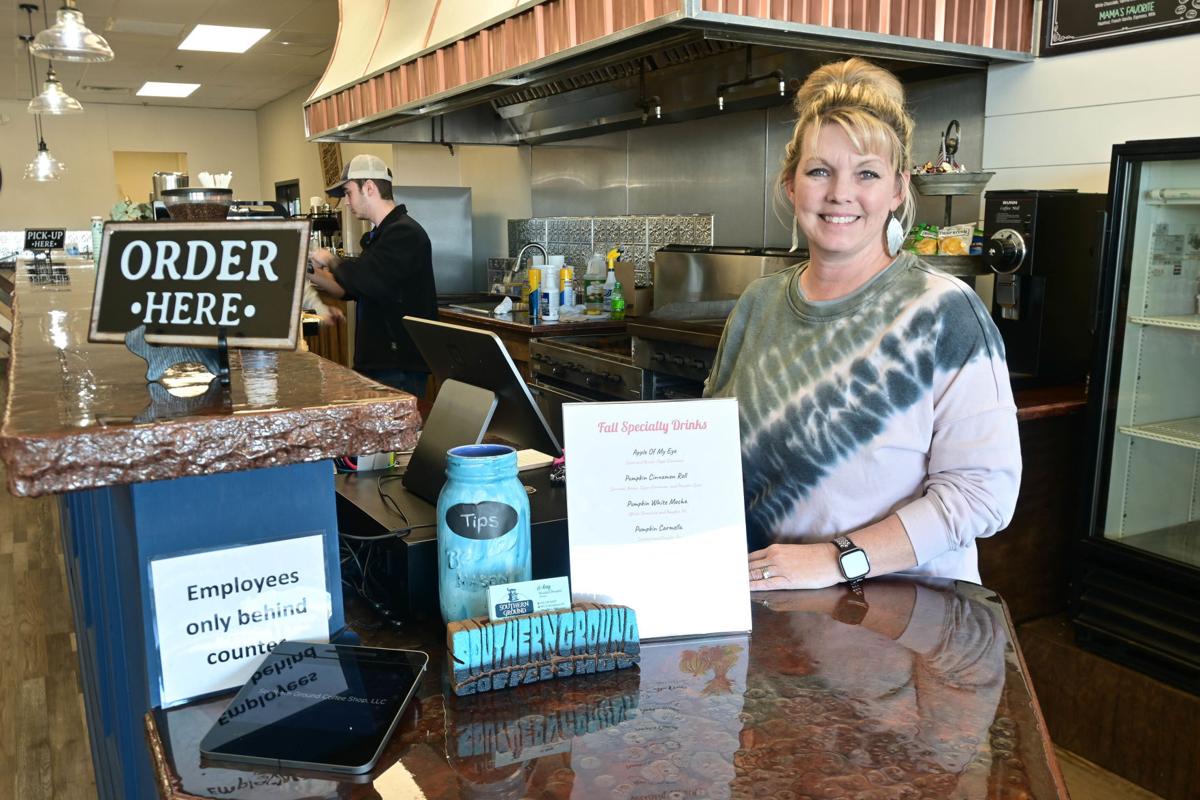 Amy Brogden is the owner of Southern Ground, a coffee shop located in the heart of Mount Olive. 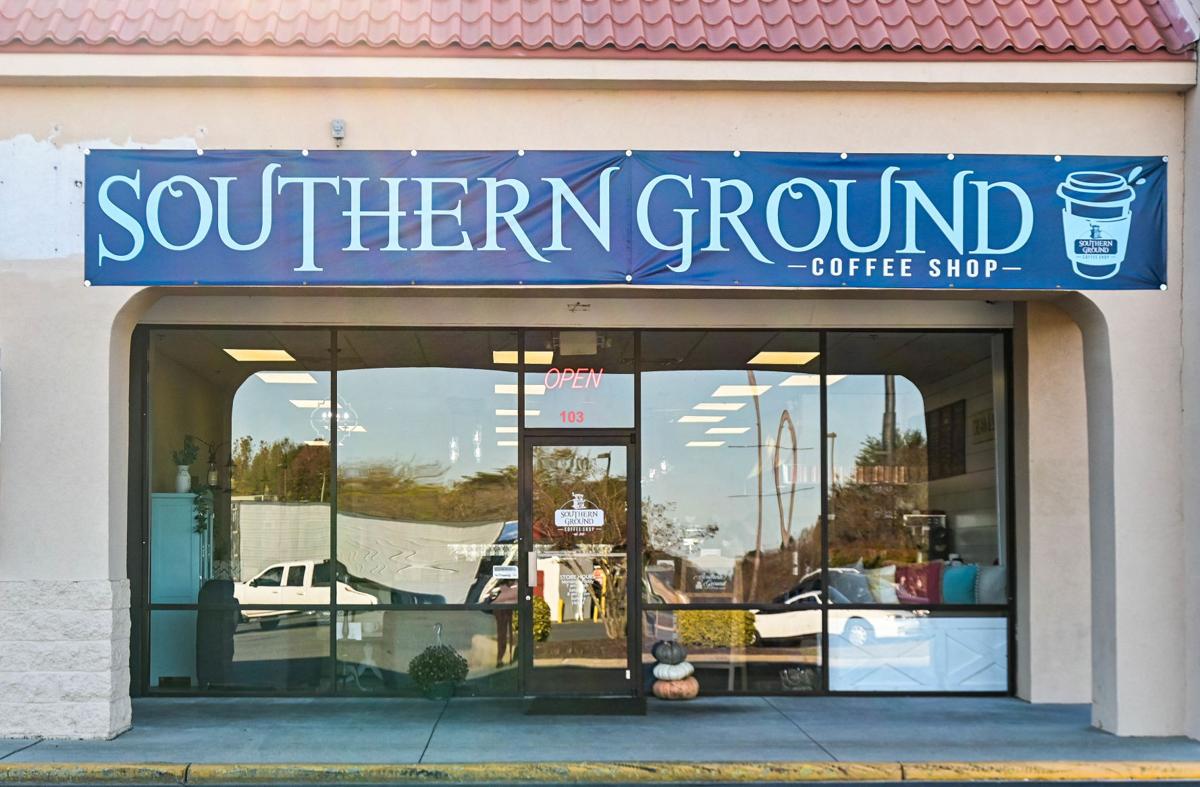 Southern Ground open at its new location in October 2021. 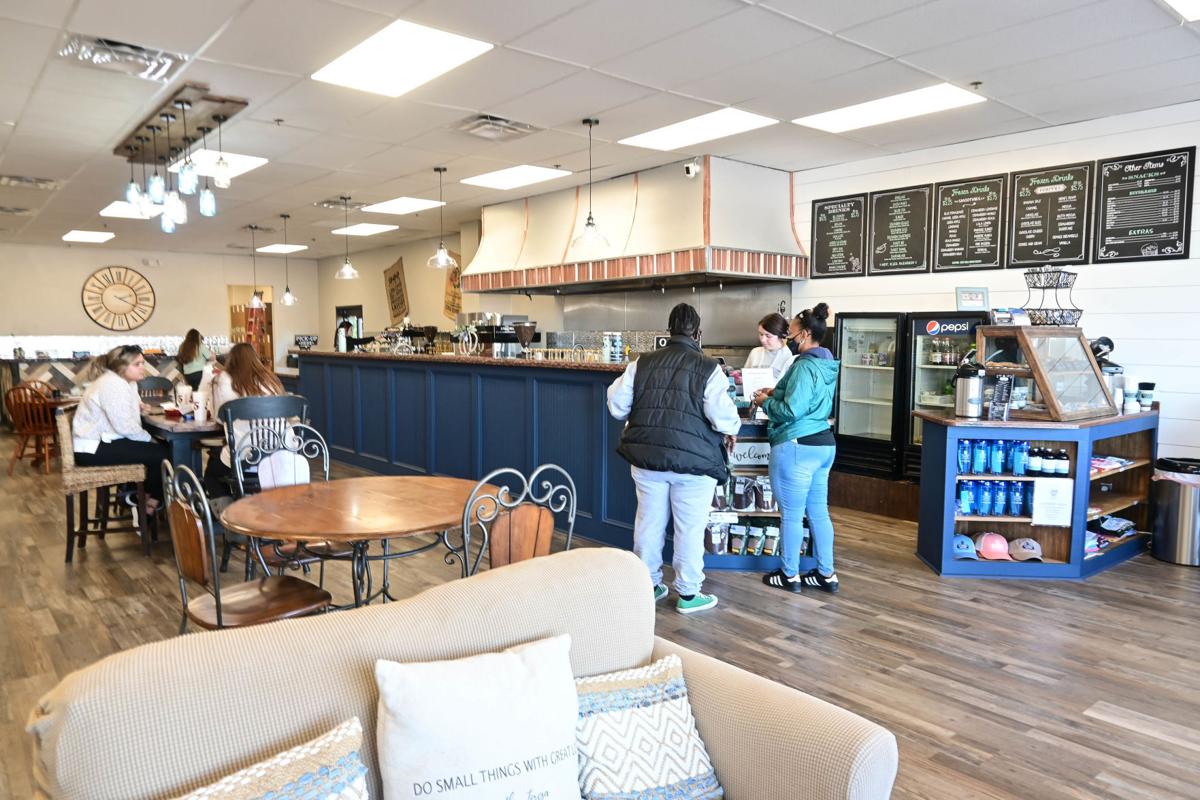 Southern Ground opened at their new location in the heart of Mount Olive in October. 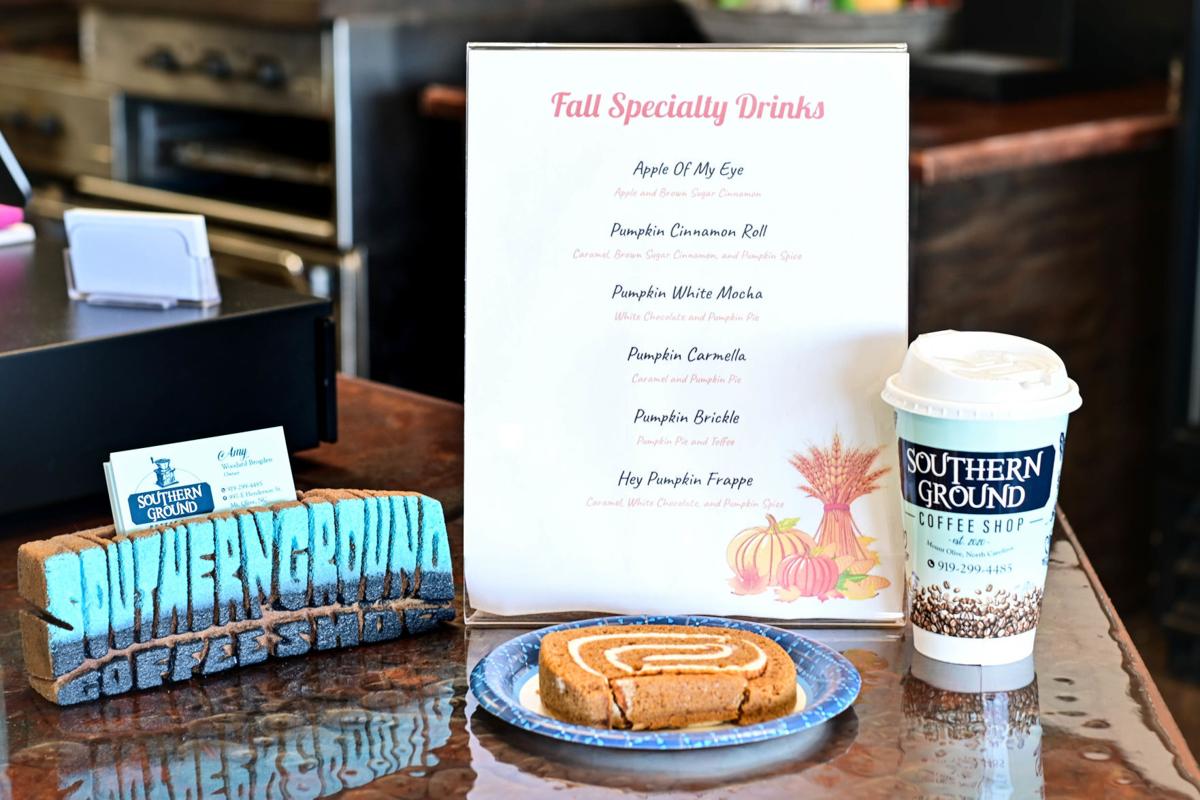 Southern Ground, is a coffee shop in Mount Olive, featuring unique coffee flavors and a couple of areas where patrons can have meetings, including their meeting room. 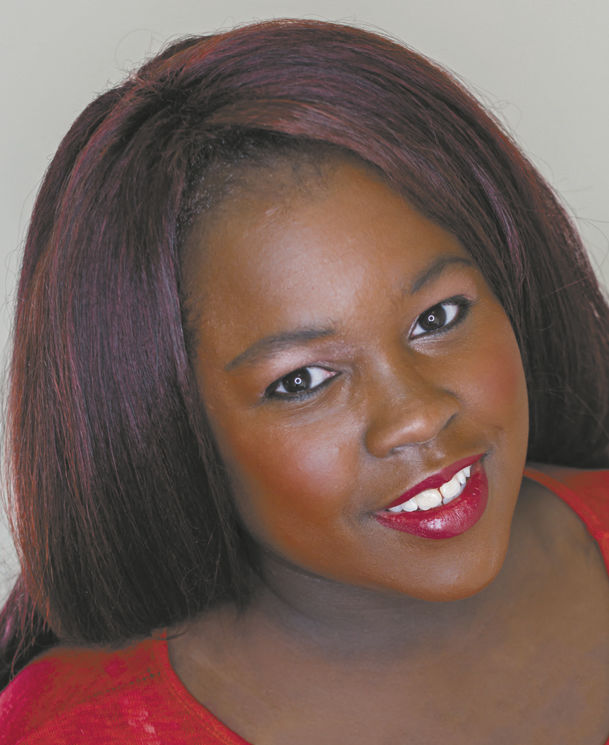 Amy Brogden is the owner of Southern Ground, a coffee shop located in the heart of Mount Olive.

Southern Ground open at its new location in October 2021.

Southern Ground opened at their new location in the heart of Mount Olive in October.

Southern Ground, is a coffee shop in Mount Olive, featuring unique coffee flavors and a couple of areas where patrons can have meetings, including their meeting room.

One day driving through Mount Olive, I thought I was seeing things when I saw a coffee shop. Mount Olive is such a small town you usually don’t see many changes. Downtown only has about half the business that it used to, or it appears that way to me anyway. A lot of vacant, old, and run-down houses and buildings are a common sight, but Amy Brogden, owner of Southern Ground had a brilliant idea when she decided to open a coffee shop.

Southern Ground is located where the old HWY 55 used to be, in the same shopping center as Food Lion. The coffee shop first opened up in June 2020 right in the thick of COVID-19. Luckily they were not affected as much as some other businesses were.

Brogden’s husband owns a contracting business, so when they decided to move into the old Boost Mobile store, which was a shell, her husband was able to build almost everything that she needed.

Even though the world was full of COVID restrictions and fear to be in public, they were able to outgrow their location in just one year. That’s when they moved to their new location in October 2021.

Brogden was a licensed supervisor for stockbrokers by profession and then transitioned into insurance. After only a year of being in the industry, she realized she hated it and wanted something different. Her sales were falling, and she had to figure out what to do next. One day during a meeting with her boss, he suggested that she work in coffee shops so that she could meet people and tell them about their insurance plans.

Brogden had no prior coffee experience, and a lot of what she knows was self-taught by watching videos, reading, researching, and practicing. Brogden said things just seemed to fall right in place, and things were happening at the right moment.

Brogden was able to connect with a woman who owned five coffee shops, and she was able to learn a lot from her. She also learned a lot about the roasting process from her supplier.

The coffee in Southern Ground has very unique names, and the community played a big part in that. A lot of people come in and ask for special blends they have had at other places, and her employees love to mix and match the flavors to create their unique flavors.

When that happens they test the new coffee mixture in the store and if people respond to it well it becomes a new menu item and the person who created it gets to help name it! I thought that was so cool. Customer satisfaction is important to her. If you don’t like your drink they don’t make you pay for it.

Quality is also important to them. When the Brogdens were shopping around for a distributor they narrowed their coffee down from 60 different coffee roasts. They also did three private tastings with friends and family to make sure they picked the right ones.

I fell in love with the place as soon as I walked in. An interior decorator must have had their hands own that place because it is decorated and designed so beautifully. Different sections of the store have a different feel, but no matter where you decide to sit it looks comfy. There is a couple of areas where people can have meetings, including their meeting room that they let people use for free.

The building is also shared with PDW and Daily Testify which is a Christian social media group. They have offices in the back and help split the overhead costs.

They are not doing food quite yet, but they do offer small locally made bakery items like croissants, muffins, cookies, etc. to compliment the coffee. So instead of food for this review, I tried a variety of their coffee blends. They also have chicken salad and pimento cheese available. I tried two of their drips. The first one was the 19th Hole, which was made with rich chocolate and caramel. As soon as she put the cup down on the table all I smelled was the delicious aroma of chocolate. Who doesn’t get excited over the smell of chocolate right?

It was a bold coffee so it’s for the real coffee drinkers, not the “frou-frou” coffee drinkers like me that want all the creams and all the sugars! HA! It’s something that will wake you up in the morning. It paired great with the cream cheese pumpkin roll I tried.

Then, I tried the Crème Brulee drip coffee made with creamy vanilla custard and caramel flavors. I tried the banana split Frappuccino, which is coffee-free unless otherwise requested. I am not a big fan of banana-flavored things, but it wasn’t bad. It tasted like a banana split milkshake. If you are into that flavor, I am sure you would love it.

Lastly, I tried what I was told is the most popular drink, named after a sassy employee, the Sassy Pants. I had it iced. It’s made with white chocolate and caramel flavors and I loved it! I am all about some caramel now! I always appreciate a coffee that I don’t have to fix up, and I didn’t have to do a thing to this one.

It was a lighter coffee and not too bold. This iced coffee would be a great little pick me up for that after lunch, mid-day slump we get into. I enjoyed the pumpkin roll too. I am just getting into the whole pumpkin craze, and the pumpkin bread and cakes have been the only things so far that I like, but that cream cheese pumpkin roll was delicious! For all the pumpkin lovers out there, they had a whole pumpkin spice line available, but you better hurry. I’m sure it will be phasing out after Thanksgiving.

They also offer smoothies and teas, and most things can be made hot, iced, or shaken.

I’ve played around with the idea of having a coffee shop one day, maybe in retirement, and this place brought back that itch! I have found a new place to work when I don’t go into the office, so I’m sure I will become a regular. I loved Southern Ground, and wish them nothing but success. I give them an A+.

Follow more of Lauren’s food journeys at www.ItsAFoodieThang.com. Lauren Branch can be reached at lbranchnews@gmail.com.