Log In Register
You are the owner of this article.
Edit Article Add New Article
You have permission to edit this article.
Edit
News
Sports
Opinion
Features
Obits
Multimedia
Classifieds
e-Edition
Our Sites
Share This
1 of 6 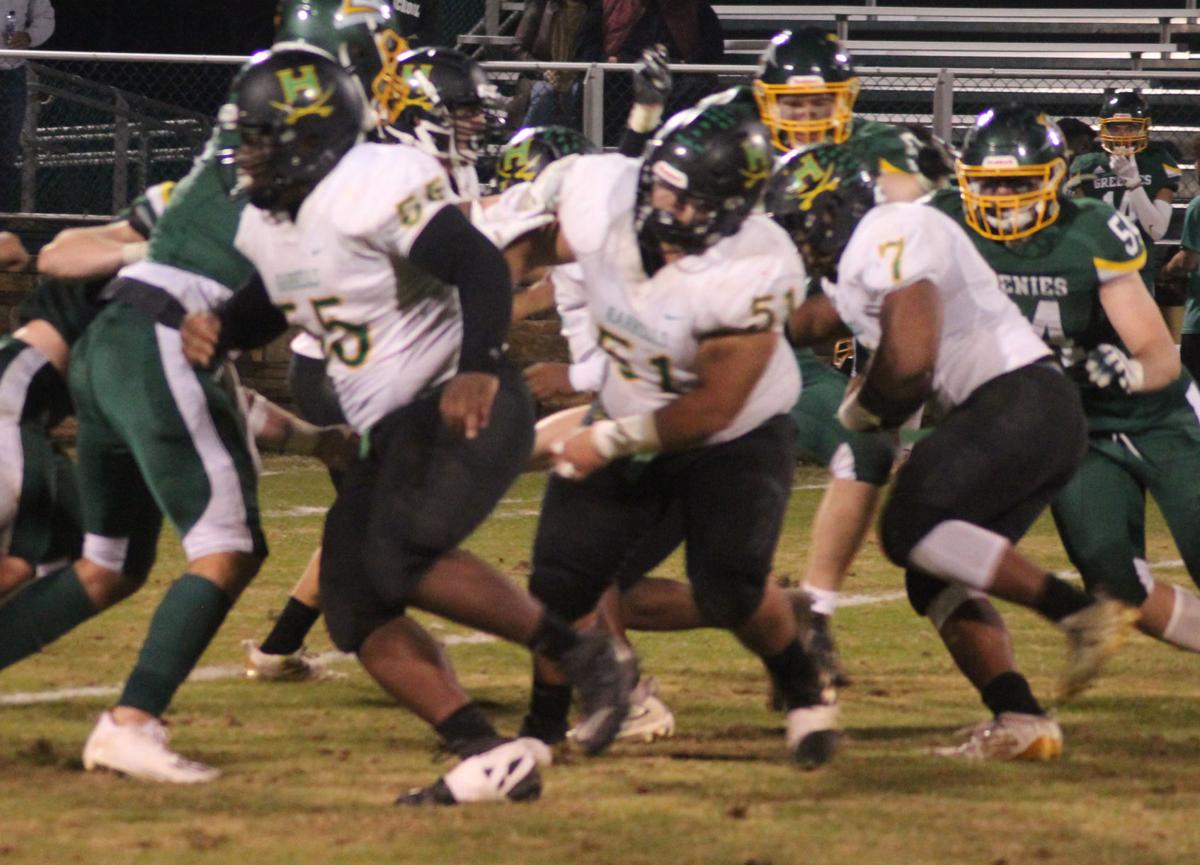 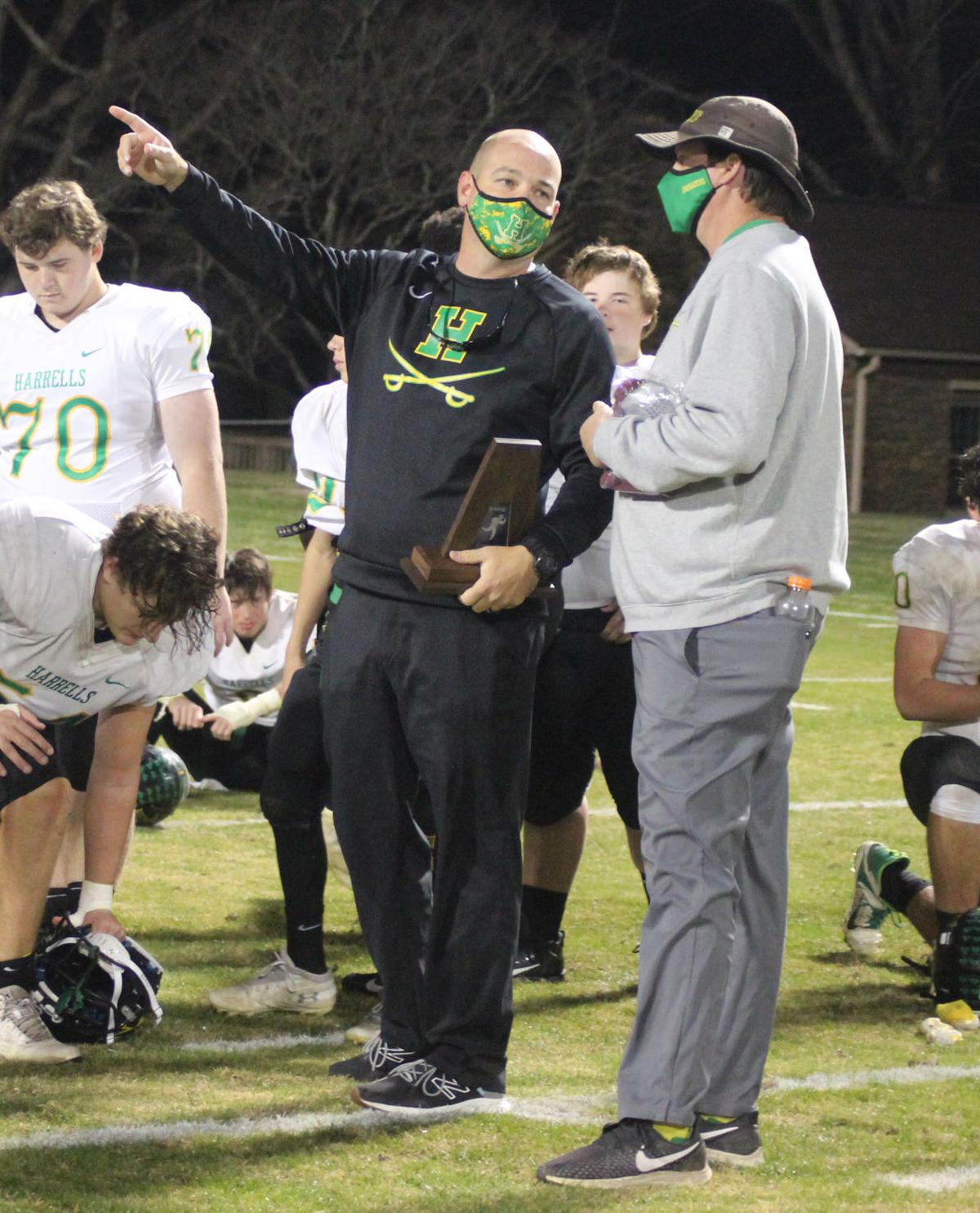 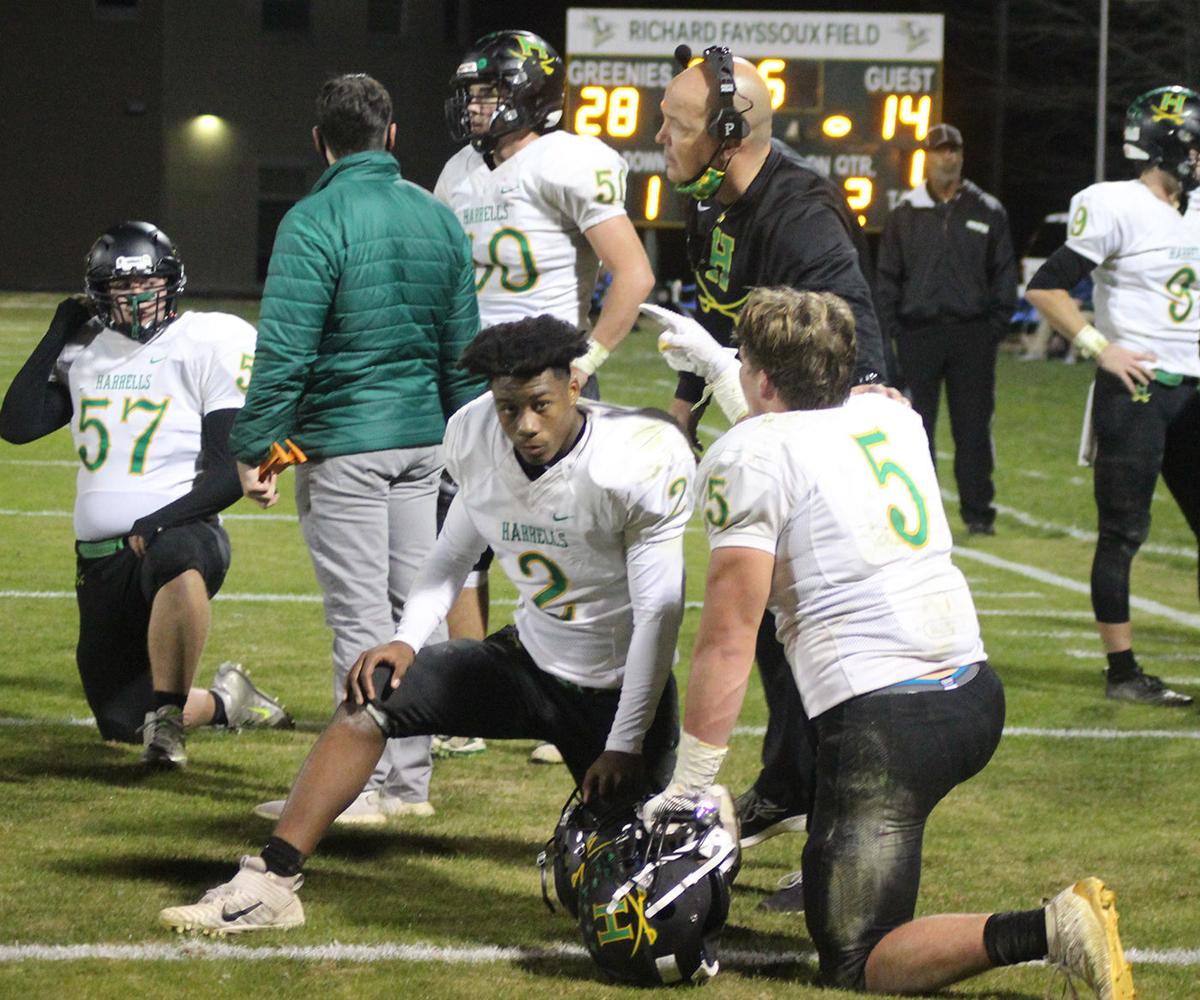 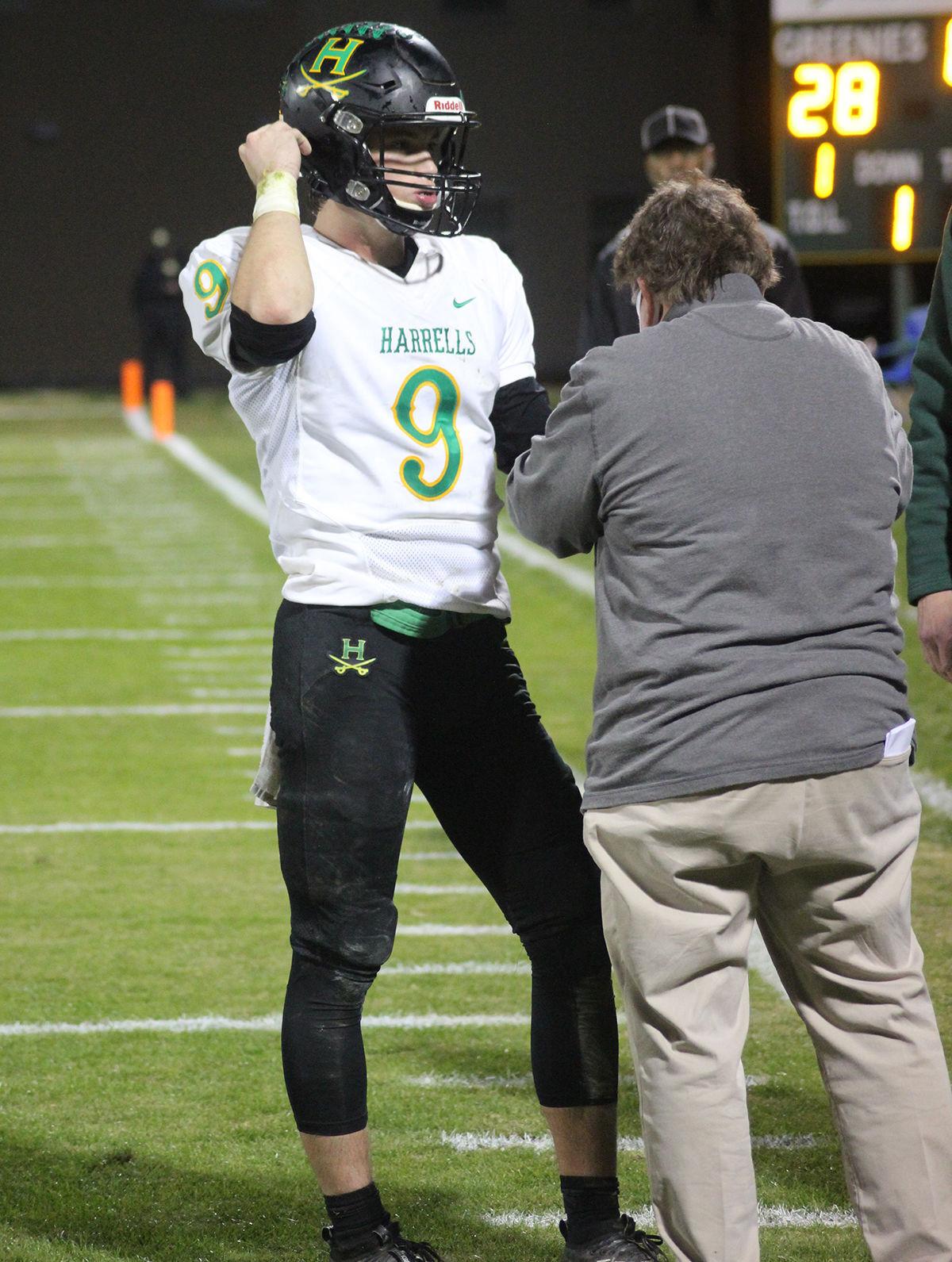 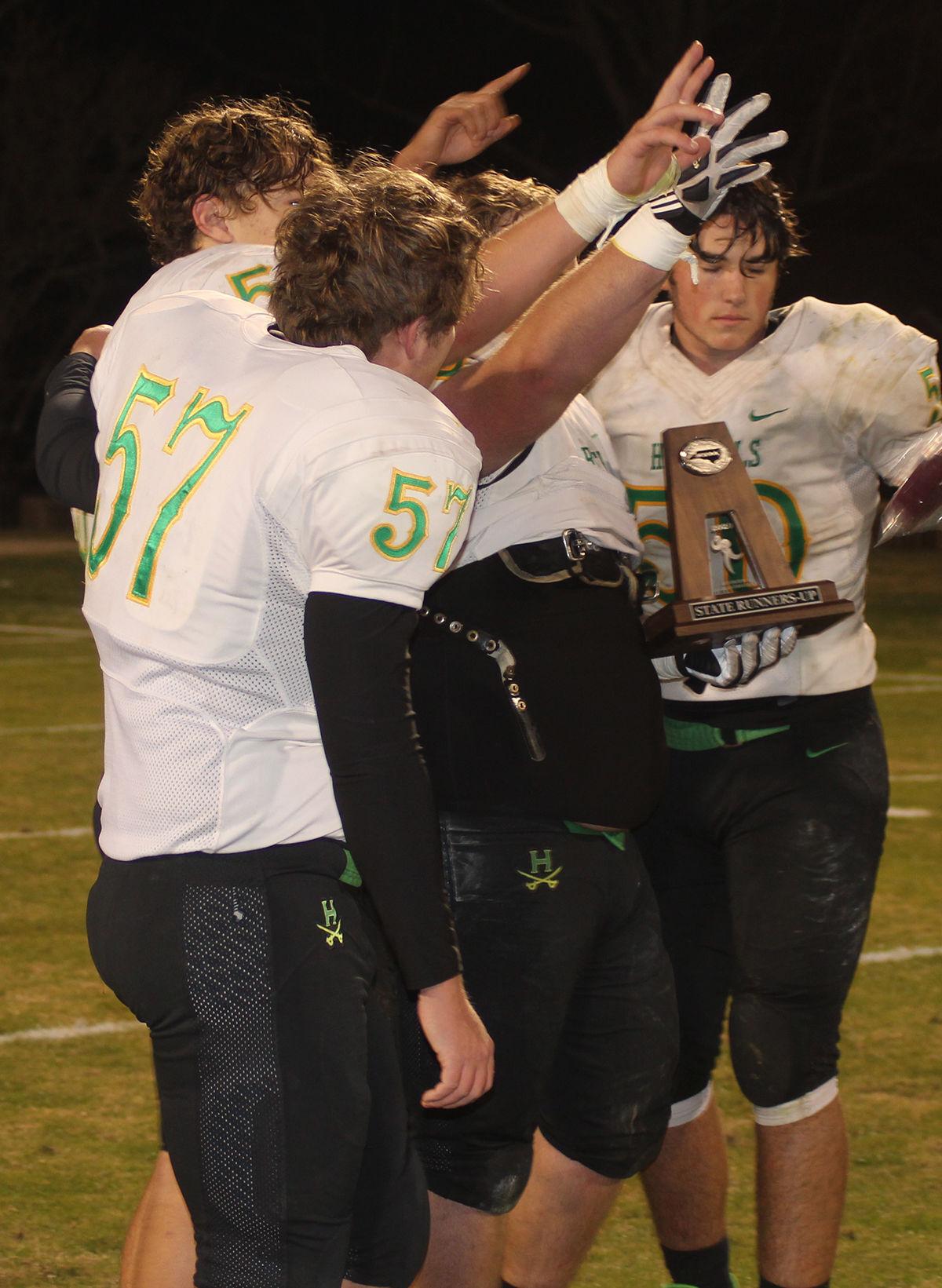 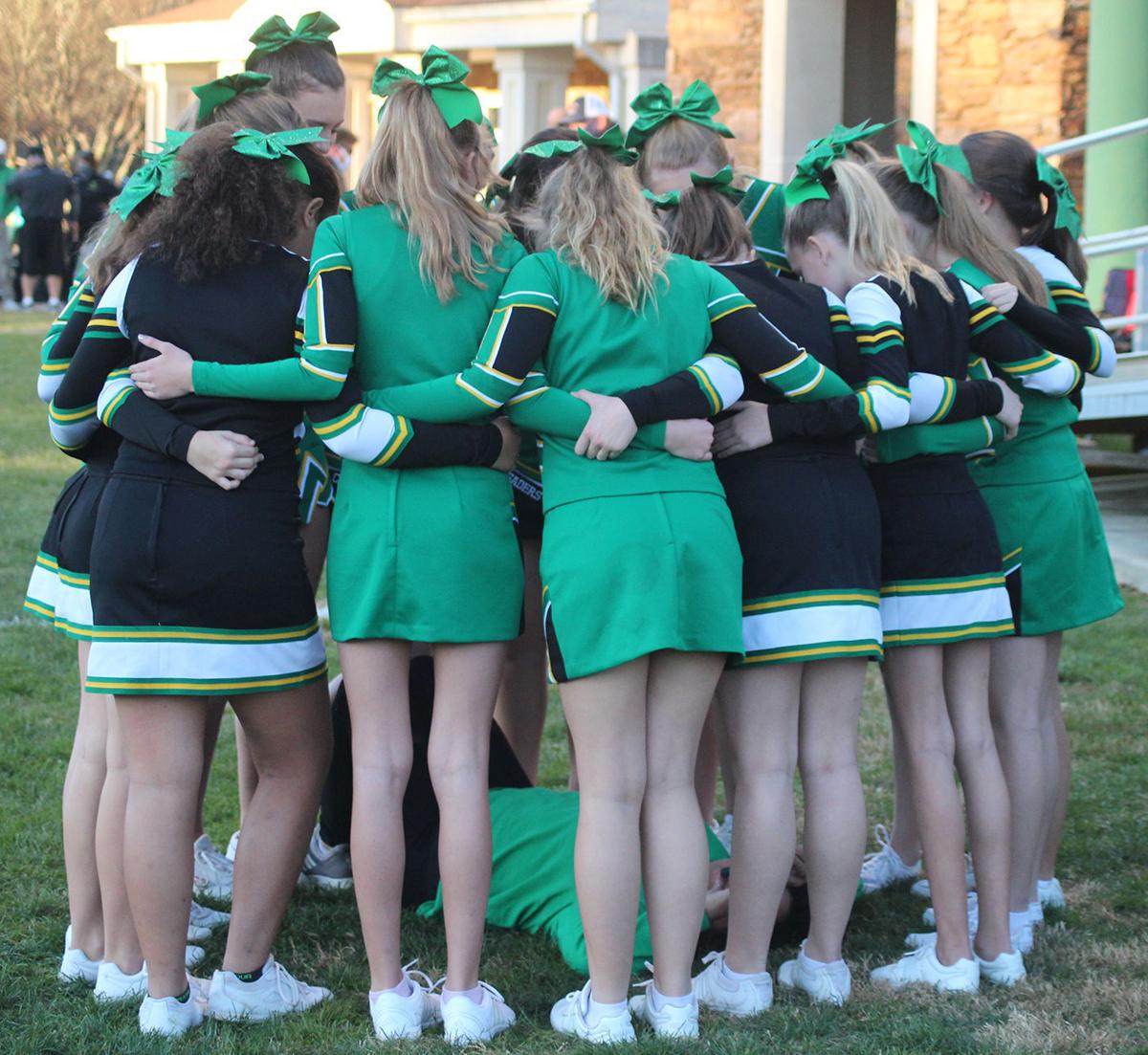 HARRELLS— Harrells Christian Academy returned to the limelight this fall.

And with nearly every player expected back next season, the Crusaders appear to be on track for another run at its 13th NCISAA title.

Even a 63-35 loss to the Christ School in Asheville on Nov. 20 didn’t dampen the fireworks over HCA’s return to prominence.

The Greenies had twice the players as HCA, five Division 1 signees help them win their first title in school history. They are usually an NCISAA Division 3 school, but because of the Covid-19 pandemic, were shuffled to Division 2.

HCA is a Division 2 school by size, even though most of its regularly scheduled foes have more players.

It was the first loss of the season for Big East Conference champion HCA (8-1).

“The Charlotte Catholic coach (Mike Brodowicz) told me the Christ School was good enough to win it all in Division 1,” said HCA coach Jason Arnette.

“But I knew for us to win the game we would have to play as turnover-free as possible, get a few breaks and create something off plays like a fake punt. We had to take a few chances.”

But early turnovers lead to a 28-14 halftime deficit, and things got worse in the third quarter as the Greenies, who had substitute players ready to go at the call of a coach, seized the momentum on their home turf.

“I felt like we never gave up while being outnumbered and short two players and then missing two because of injuries during the game,” Arnette said.

Ayden Fussell, who was filling if for Sam Hope (out for virus protocol), broke his collarbone. Two plays later quarterback Ethan Spell badly bruised his left hand (possibly breaking it).

“They were a better team, no doubt, but I like our fight,” Arnette said. “But that’s how injuries magnify our problems with less players to call upon.”

It was HCA’s only negative mismatch in a season that saw the Cru finish 8-1.

“We played more games than anyone in the state,” Arnette said. “We consider that a big deal given the circumstances surrounding Covid. It was frustrating at times, but our kids never got down over anything, including the state finals when we trailed by three scores.”

HCA got to the finals by tripping the Cabarrus-Cannon/Concord Academy 21-13 in the semifinals in a game that wasn’t as close as the score would indicate.

“When I started here at Harrells, my (2020) seniors were freshmen and they bought in over the last two years to go 16-5,” Arnette said. “That’s a testament to how our players worked.

“This bunch had an attitude that said they could win. We’re young but these kids are the strongest group I’ve ever coached. They’re in the weight room benching 400 (pounds) and squatting 500-plus.

Here’s a recap of the games leading up to the Division 2 finals.

Ethan Spell’s PAT following an Issac Underwood score was the difference and a huge sign that HCA was being reborn.

The game was postponed to Monday and was played on a wet field in Fayetteville. While a league foe, this game was a non-conference affair as teams struggled to find independent opponents amid outbreaks from the virus.

Offense kicks it up

Devin Gardner followed with three rushing TDs and 109 yards, his first of eight 100-plus yard efforts.

Gardner scored five times en route to 253 yards in a game that saw the Bearcats score 24 points in the final quarter.

While the offense rushed for 331 yards, the defense limited Hickory Grove to nine first downs and 213 yards of total offense.

Gardner bulled his way to 176 yards and four scores and Trent Jackson had 11 tackles.

The Crusaders hit on all cylinders to post its first win over its rival since 2012.

Jackson and Jack Barber combined for 12 tackles in limiting the Ravens to 154 yards of offense in another impressive road outing.

WC’s two scores came in the middle of the first quarter and with little time left in the fourth.

Since Trinity was upset the previous week, the league title was already decided. But the Crusaders left no doubt who was the better club, in terms of offensive execution and a defense that gave up yards but not big plays.

Jackson, Boone and Grice Bell combined for 18 tackles. Gardner went over the 1,000-yard mark for the season.

Gardner ran for five scores and returned a fumble for another TD.

Arrington chipped in with 112 yards and two scores as HCA ran for 438 yards, which included Spell’s season-long 53-yard trip to the end zone.

End of the journey:

After HCA rallied to cut the deficit to 28-14 at halftime, the Greenies scored 27 unanswered points in Asheville.

HCA gave up a season-high 551 yards with 432 coming from the Greenies’ passing attack.

But HCA could not control Cade Mintz, who had 83 yards rushing and 110 receiving. Zack Myers (2-121) and Painter Richards-Barker (4-160) both had mind-blowing numbers.

Bell, who is a DL and center, is a team captain.

“He’s the leader of the offense,” said Arnette, “and probably our team MVP. He’s the brains up front as the center and became a really, really good DE.”

Gardner, who transferred from Wallace-Rose Hill, finished with 1,463 yards and 20 scores.

Arrington piled up 510 yards and five scores and Underwood 362 and six TDs despite being out with Covid-19 protocol two games and missing the better part of another with an high ankle injury.

Jackson was a beast and leader from his MLB spot. He had a team-high 86 tackles.

“I knew how good Gardner was, but had to find out exactly how good TJ (Jackson) was,” Arnette said. “He filled in where Jack (Laslo, HCA’s leading tackler and rusher in 2019) left off. So I guess his play was a little bit of a surprise.”

Spell was HCA’s kicking force. He averaged 38.5 yards on 20 punts, including seven inside the 20 and had 23 touchbacks on his 53 kickoffs.

Hope, Jackson, Gardner, Spell, James Cavenaugh and Walker Ward each had an interception.

All things considered, no NCISAA school had more of a comeback statement than the Crusaders.