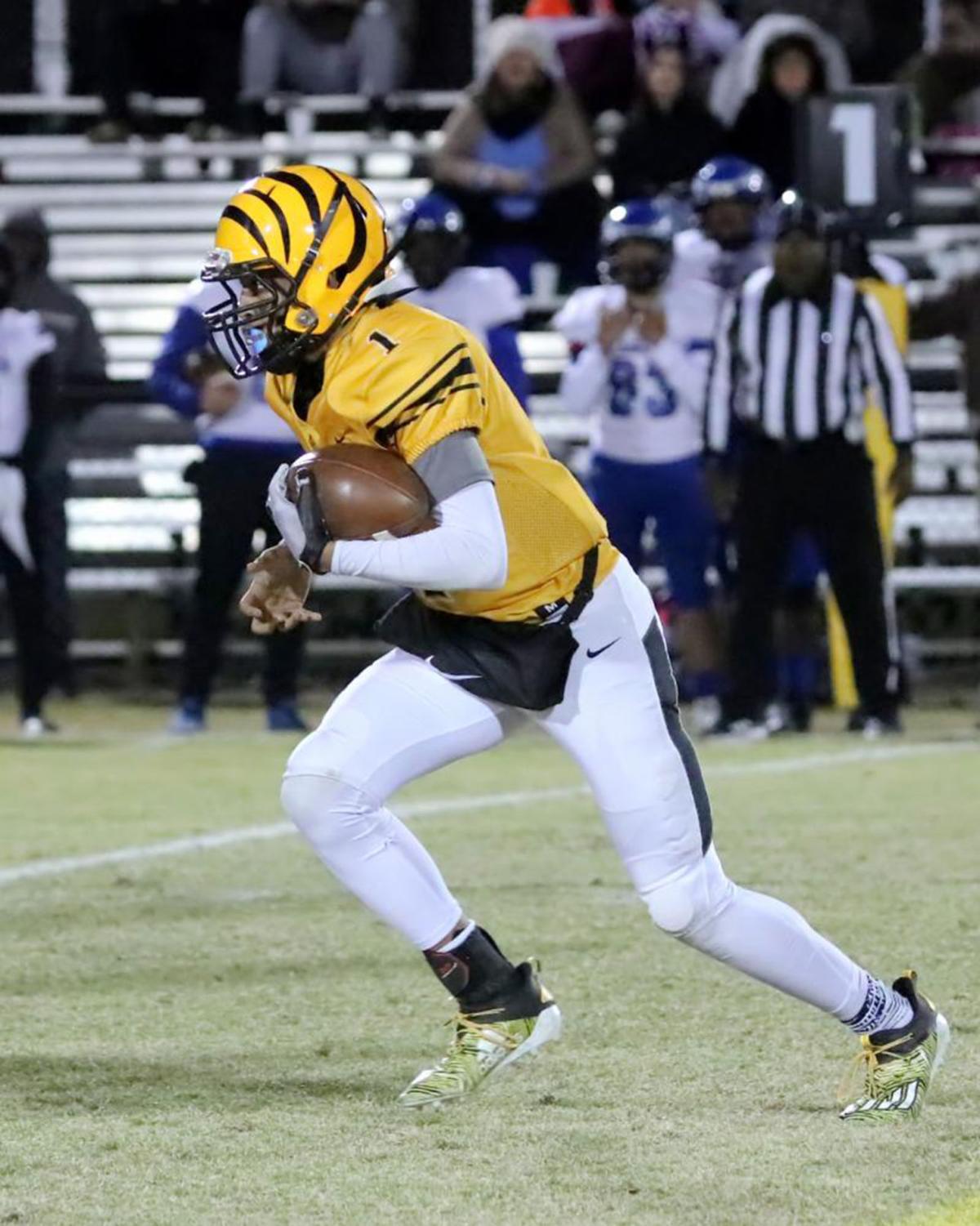 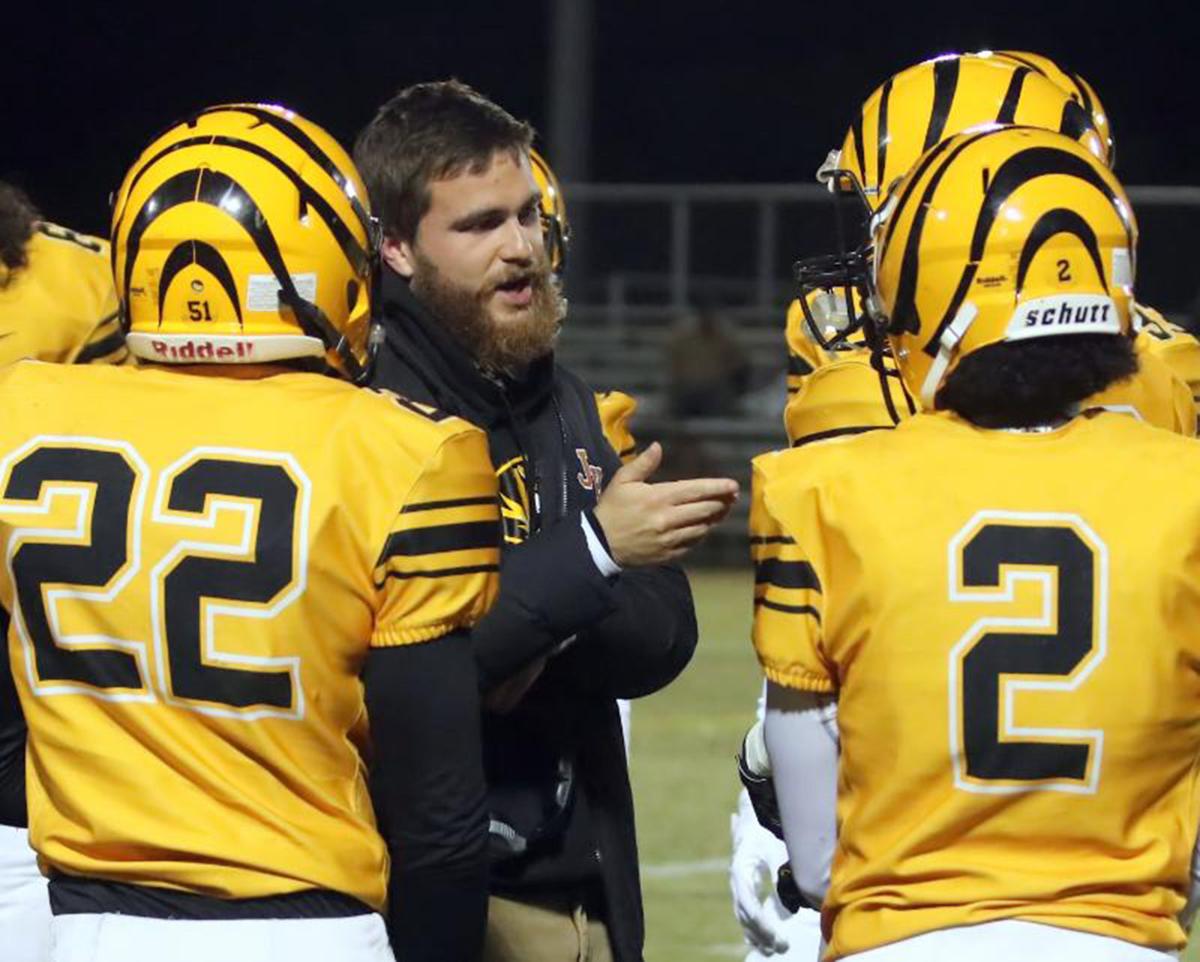 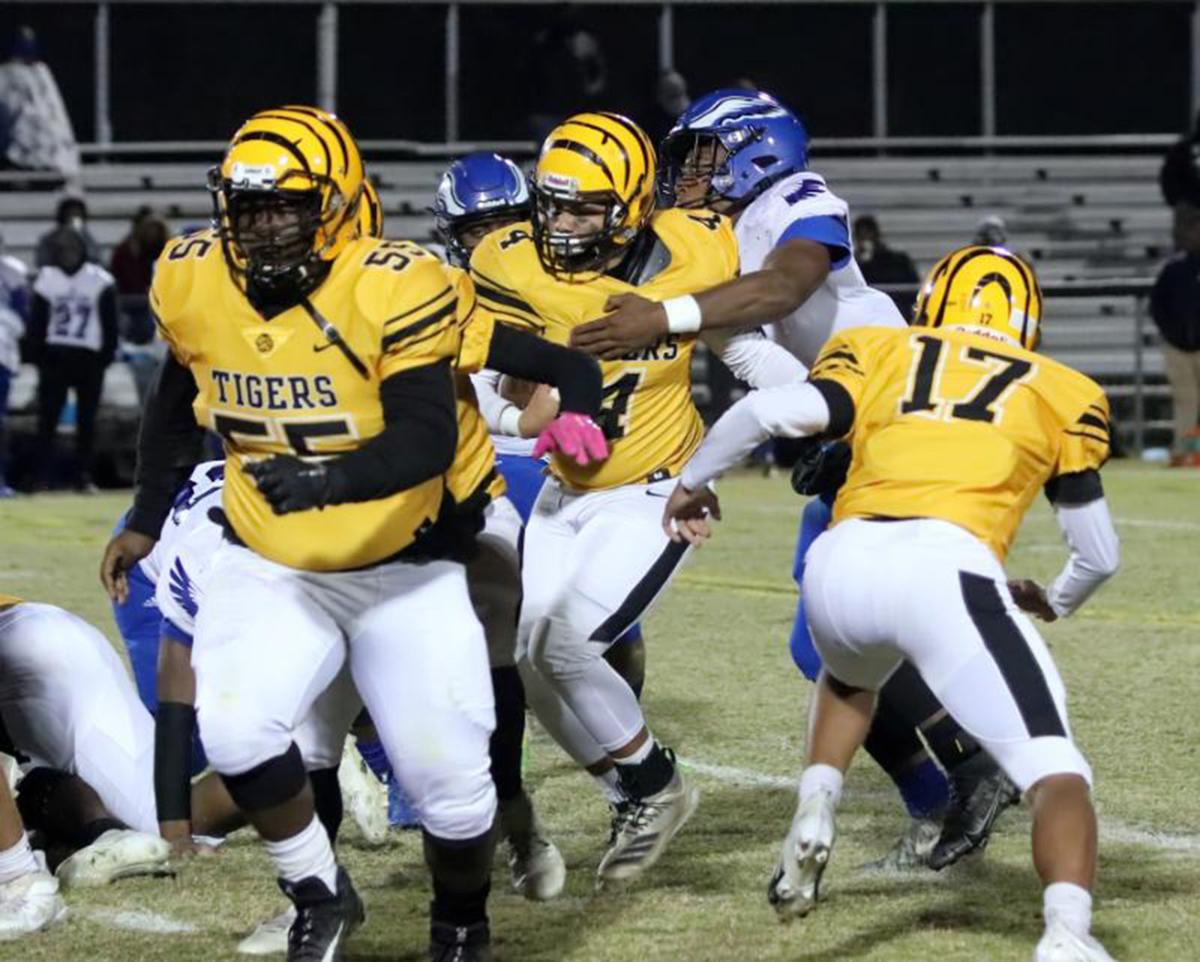 ABOVE: Defensive coordinator Tyler Pugh goes over a scheme with his unit during a game against Wallace- Rose Hill. LEFT: Andrew Pender, the MVP of James Kenan did a little bit of everything

ABOVE: Defensive coordinator Tyler Pugh goes over a scheme with his unit during a game against Wallace- Rose Hill. LEFT: Andrew Pender, the MVP of James Kenan did a little bit of everything

WHITEVILLE—James Kenan’s rocking comeback month into the realm of competitive football teams came to a hollow halt Friday night in a 56-0 second-round wipeout by No. 4 East 2A seed Whiteville (11-0).

Whatever the prediction for the game, it wasn’t that.

“The way it was going four minutes in, I was looking for a rock to hide under,” said first-year Tiger head coach Tim Grady.

It was the most points yielded and widest margin of defeat in JK playoff history. (See notes at the end of this story.)

Maybe worse, an old tormentor was the perpetrator.

Whiteville head coach J.P. Price was his father Joey Price’s offensive coordinator at Wallace-Rose Hill from 2009-16, when the Bulldogs held a 7-4 record against James Kenan.

That included a 2-1 mark in 1AA East Region championship games (fourth round).

J.P. Price said, “We heard all week about who we’ve played—and Duplin County football,” Price said, referencing critiques about Whiteville’s schedule compared to James Kenan’s. “I couldn’t be prouder of our guys.”

Know what? Neither could Grady, at least about the turnaround started by his band of players and coaches who posted Kenan’s first winning record since 2015.

Grady, out from under his rock by Sunday and brimming with Tiger Pride, was ready to warm up to the Thanksgiving season.

“I was thrilled coming back in late June when 75 kids showed up [for spring practice]. Now we’ve got to be able to keep those numbers and keep developing the discipline.”

Then he got rolling like the assistant pastor he is.

“I’ve told our kids all year that James Kenan needed a small group to do something big. And we’ve done it.

“We weren’t supposed to come back from having the beginning of the season taken away from us, and we did it.

“We weren’t supposed to beat Kinston and Southwest Onslow at their homecomings, and we did it.

“We weren’t supposed to hang with Wallace and we did it.

“We hadn’t won a playoff game in six years—but we did that, too.

“At one point, early there, it looked so bad that we were actually thinking about closing down our varsity season and just playing our junior varsity games.”

Two months later, he sees the beginning of a foundation to build on.

“My hat’s off to our seniors, all of them,” Grady said. “I told our team they had changed James Kenan football for years to come.”

A small group doing something bigger than expected.

And he’s excited about a boatload of rising sophomores and juniors moving up from the JV team, which was undefeated until dropping its last two ECC games to Southwest Onslow and Wallace-Rose Hill.

A couple he mentioned are Stephon Stanley, “a phenomenal athlete,” Josh Mitchell “with a lotta speed and toughness,” Tyquise Wilson and Shykwon Williams.

“Plus a host of linemen, some bigger kids who’ve been lifting all year.”

His staff will be looking for increased competition, but there are 10 defensive starters returning, some still to reach their physical and football maturity.

“Some other kids will be pushing the returnees,” he said, “and that’s what you need.”

“When I was 18,” Grady said, “I got a tiger tattoo on my left shoulder. I probably wouldn’t do it again, being a pastor and all, but it’s where my heart is, and I mean that thing.”

Grady said that when he talked to J.P. Price before Friday’s game, “He said he’d finally gotten the program where he wanted it, and they’d been going strong in the weight room four years.

“My expectation is that with a few more years of lifting and maturity, we’ll see the same kind of fruits of our labor.”

Grady said he’s confident in the team’s basic formations and strategies, carved out with the Pugh coordinators: father Randy on offense and son Tyler on defense.

Both are steeped in Tiger tradition, Randy as a coordinator for Avent Jr. and Tyler as a an inside linebacker, both on the 2013 state title team.

“Our biggest excitement,” he said, “is that we had a winning record and we’ve got a majority of our players back, a majority of starters both ways, 10 on defense, and our whole offensive line.”

Grady also gave a shout-out to the Tiger fan base, which took a good following last Friday to the border town.

“I’d like to say how great it is that Friday nights out there felt like football games again,” he said. “We had a great atmosphere, even at the JV games.”

E.J. McLeod ran for 111 yards and scored four touchdowns, including a 90-yard kickoff return, dashes of 47 and 45 yards and a 32-yard pass from Zion Wilson.

Brandon Tyson also scored twice, one a 50-yard run, and led in rushing with 188 yards on 12 carries.

Speaking of old rivals, Price’s Wolfpack is in a different East Region bracket from East Duplin and Wallace-Rose Hill, who meet Friday in Beulaville.

So even if Price keeps winning, he couldn’t meet that Duplin County winner until the East final (fifth round in the new expanded brackets).

Notes: Their state title in 1960 came in the fourth round. Also included are the Division II two-round playoffs for conference runnerups (1981-84). JK won both games in 1984, so they’re not reflected in the third-round record.

Bill Rollins can be reached at yorollo@yahoo.com.