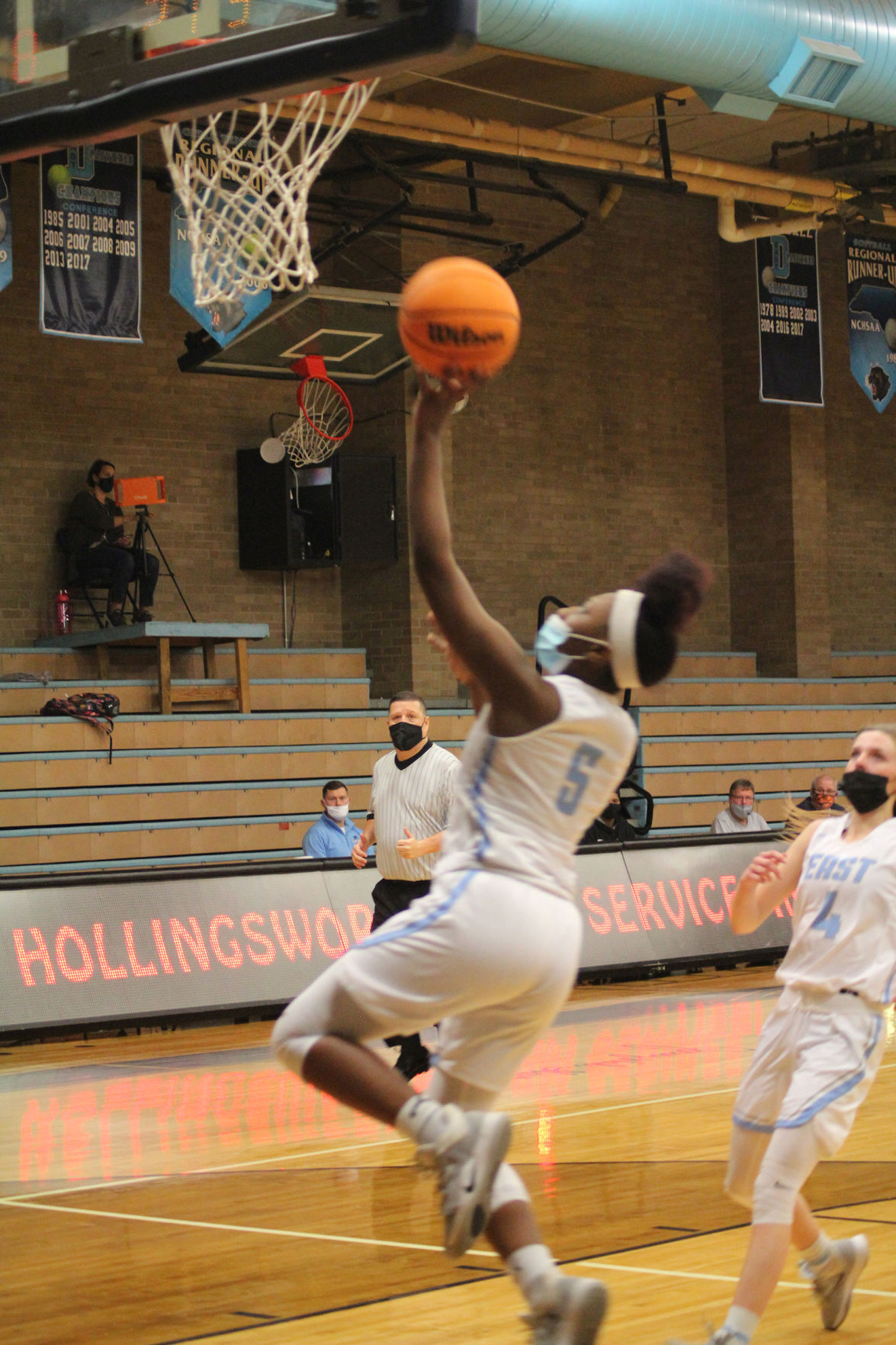 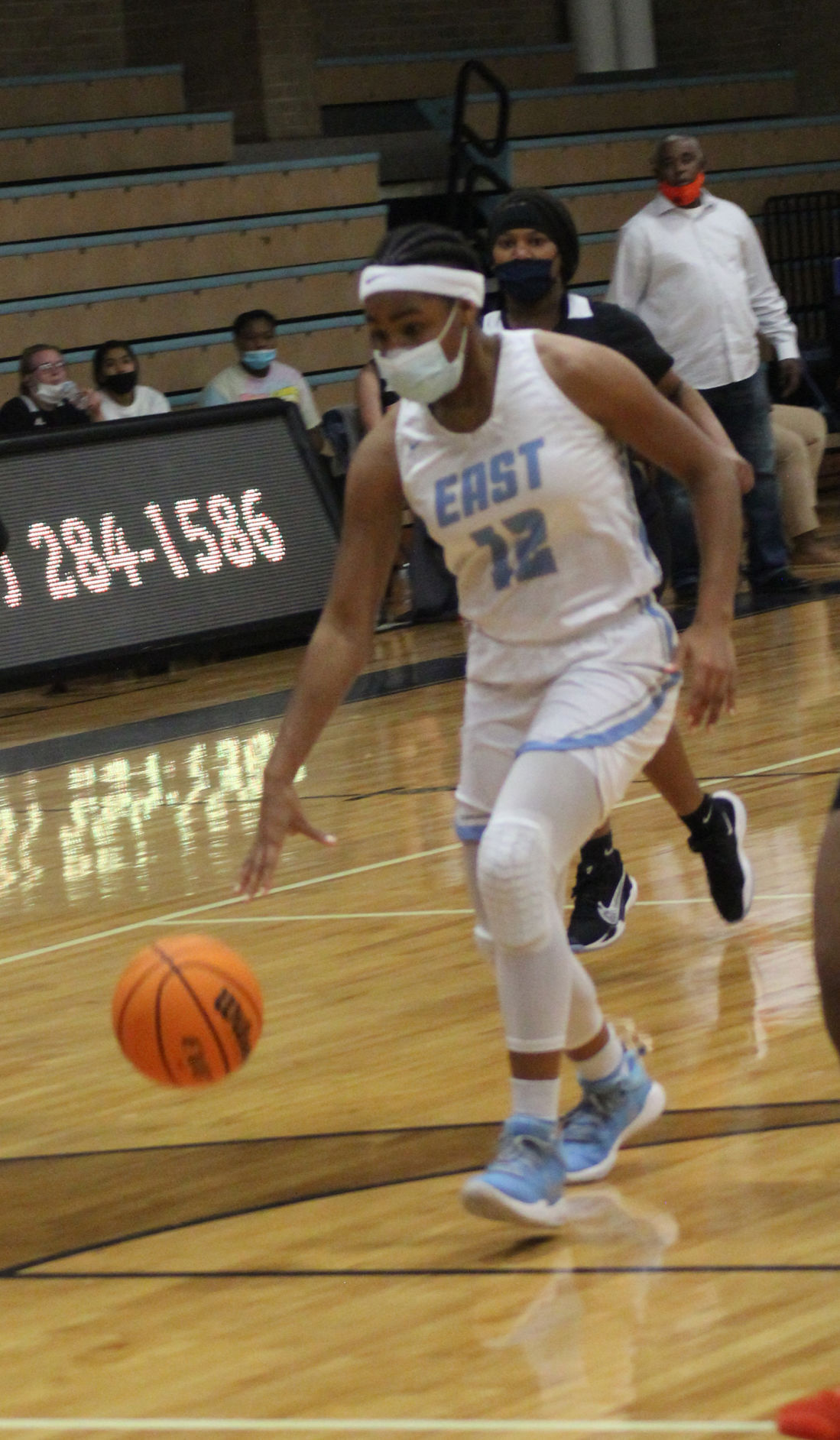 RICHLANDS — Mark Lane returned to the bench last Thursday after he had missed three of his team’s games because of a Covid-related issue.

East Duplin rolled Richlands 61-31, and it was business as usual following the first Panther loss of the season two nights earlier.

Lane got a chance to watch the 52-50 loss to Clinton via a live-stream feed.

While the loss will likely not cause the Panthers a third consecutive East Central 2A Conference title, Lane saw his team wasn’t following his blueprint for success: Defense.

Isa Banks fired in 25 points and nabbed 12 rebounds, and the Dark Horses rambled to a 27-20 halftime lead.

“Our defensive effort was just not what we talked about,” Lane said. “It wasn’t because I wasn’t there. It was because they didn’t listen to the game plan.

“We talked about denying the ball to No. 5 (Banks) and No. 12 (Khaliah Chestnutt). We allowed 5 to catch the ball in places where she was comfortable because we were not fighting defensively.”

“We didn’t make them uncomfortable, but we fought back and still had a chance to win it late,” Lane said.

Amiaya Hall stole the ball with 3.7 seconds left but missed what would have been the winning 3-pointer.

“She had time to take a couple dribbles and then an easier jumper,” Lane said. “So as poorly as we played we were there at the end with a chance to win it.

“Yet this also speaks to how our offense was out of sync. We took too many hurried shots.”

Hall led the Panthers with 18 points and 11 rebounds. Imari Judge and Zoey Stanley chipped in with 10 apiece as East Duplin (9-1, 8-1) used a 19-11 rush in the third to trim the deficit to a bucket entering the fourth quarter.

The loss will be but a memory if the Panthers take care of Wallace-Rose Hill on Monday or Midway on Wednesday.

East Duplin was hitting on all cylinders during its domination of the Wildcats.

Judge had 20 points, Hall 17 and eight boards and Carlie Radford and Nakaysha Ivory combined for 12 points.

ED had 19 steals and shot 63 percent from the free throw line (17-27), accounting for half as many point there as Richlands scored all night.

Judge led that charge by nailing eight of 10 (80 percent).

The NCHSAA will put up state playoff brackets on Saturday.

The girls’ first three rounds will be played next week on Monday, Thursday and Saturday.

The field was cut from 32 to 64 because of the pandemic.

So getting to the third round is akin to more this year than normal.

to first win of season

It was just the sixth game the Rebels were able to play as concerns over the virus have wreaked havoc on their season.

But for the fourth time this season, a final push to victory lane was not there as the Tigers fell 55-53.

JK had a chance to tie it with seven seconds left, but a Dark Horse steal ended the game.

“I was happy with our balance and it’s going to pay off next year,” said JK coach Kenny Williams, who has no seniors on his roster.

“Another tough learning lesson for us. But our passing, spacing, movement and scoring balance was there.”

Earlier in the week, a 9-38 mark at the free throw line stood out like a sore thumb after a 63-38 setback to Goldsboro in a game that didn’t get out of hand until the third quarter, when JK got into foul trouble and shot 0-11 from the stripe.

Avent tossed in 11 and Joyner nine. Harvey and Nora Williams had eight apiece.

“We’re a decent free-throw shooting team and I did not see this coming,” Williams said.

after pair of losses

Harrells Christian Academy had the rare situation of playing a team in consecutive games.

Last Friday, the outcome was similar as the Centurions eked out a 33-30 win in the semifinals of the conference tournament in Harrells.

The survivor faces the winner of No. 3 Wayne Country Day and St. Thomas Academy.

East Duplin has shown it can play with anyone in the ECC.

The Panthers won four consecutive games after coming off a Covid-19 stoppage, but last week let its guard down in a pair of losses to Midway and Wallace-Rose Hill.

Jaden Facen popped in 23, Jalen Hall 12 and Jesse Clinesmith 11 on Tuesday as ED beat Clinton 56-49 for its fourth win in a row.

Facen and Hall both came through with 21 the next night in a 71-66 loss to Midway.

The Panthers (5-4) fell to Wallace-Rose Hill on Thursday 39-36 in what may be the final nail to keep them out of the state playoffs. (See B1 for a game story).

Armwood knocked down 13 and Tyler Schoolcraft and Matthew Coltren nine apiece on Tuesday during a 58-32 loss to Rosewood.

Three nights later Armwood had 14 but Princeton had four players in double figures and won 95-33.

Yair Benegas scored three goals last Monday to lead James Kenan to a 3-2 win over Clinton in a key ECC 2A match in Clinton.

The Dark Horses led 1-0 at halftime.

JK improved to 3-0 and have outscored their opponents by a 17-6 margin.