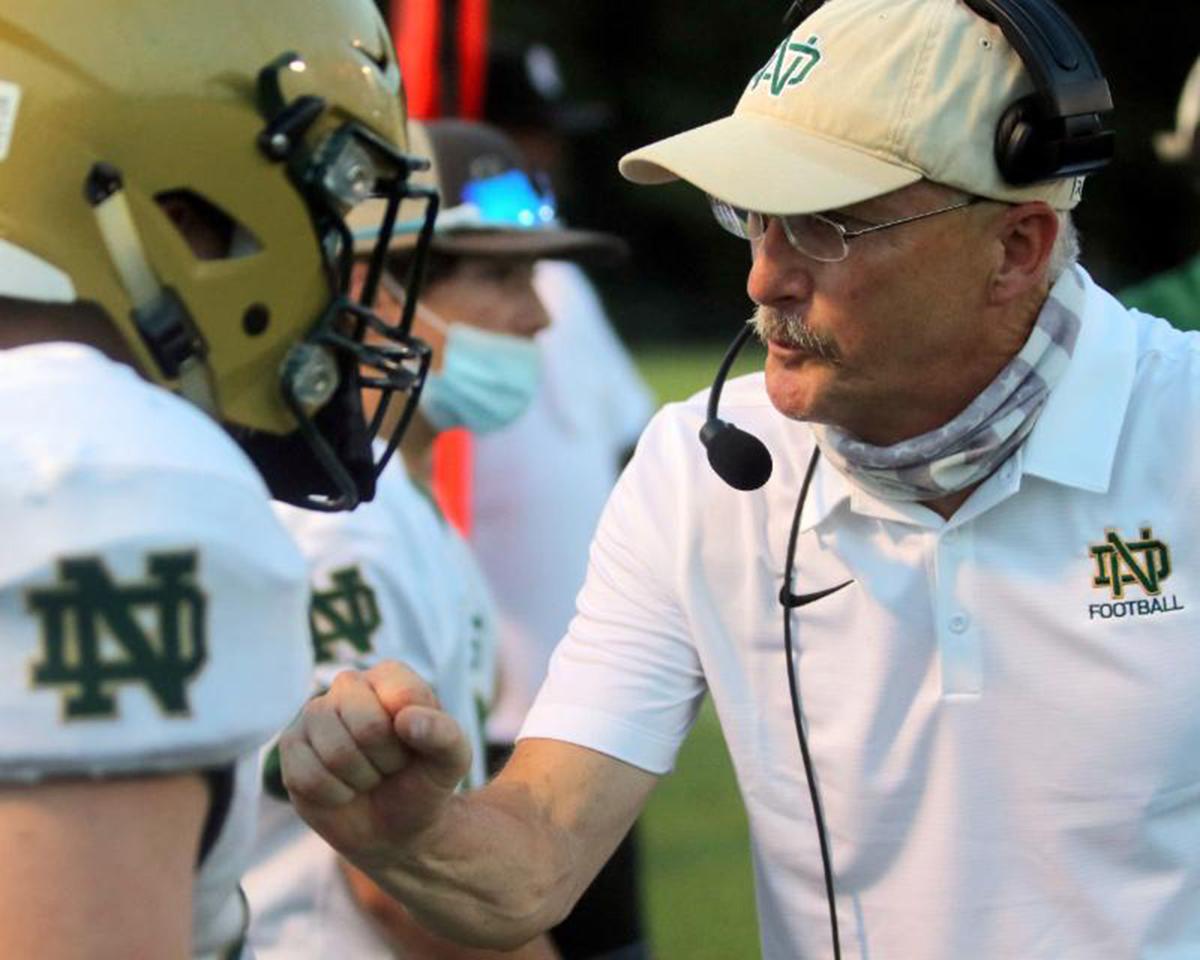 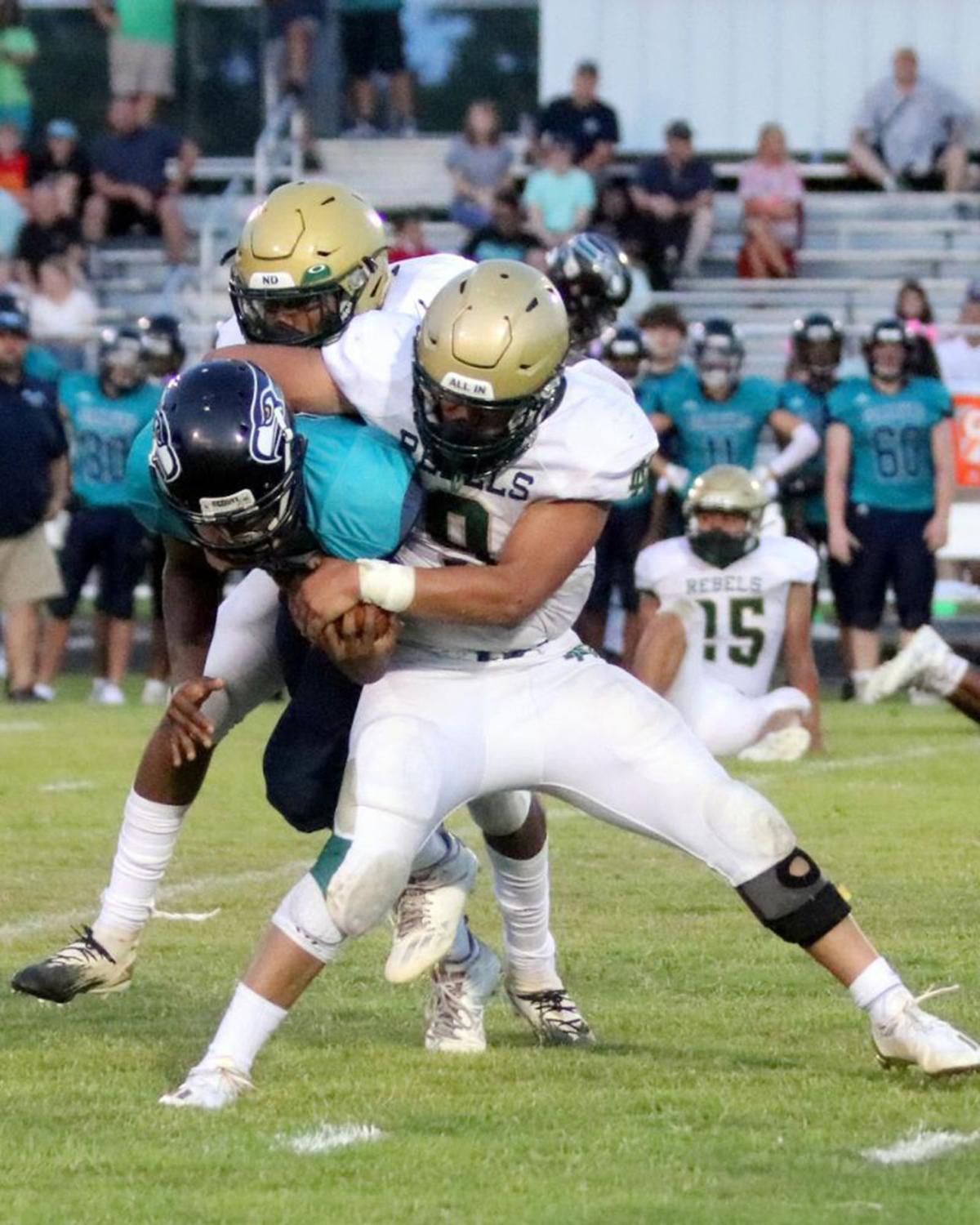 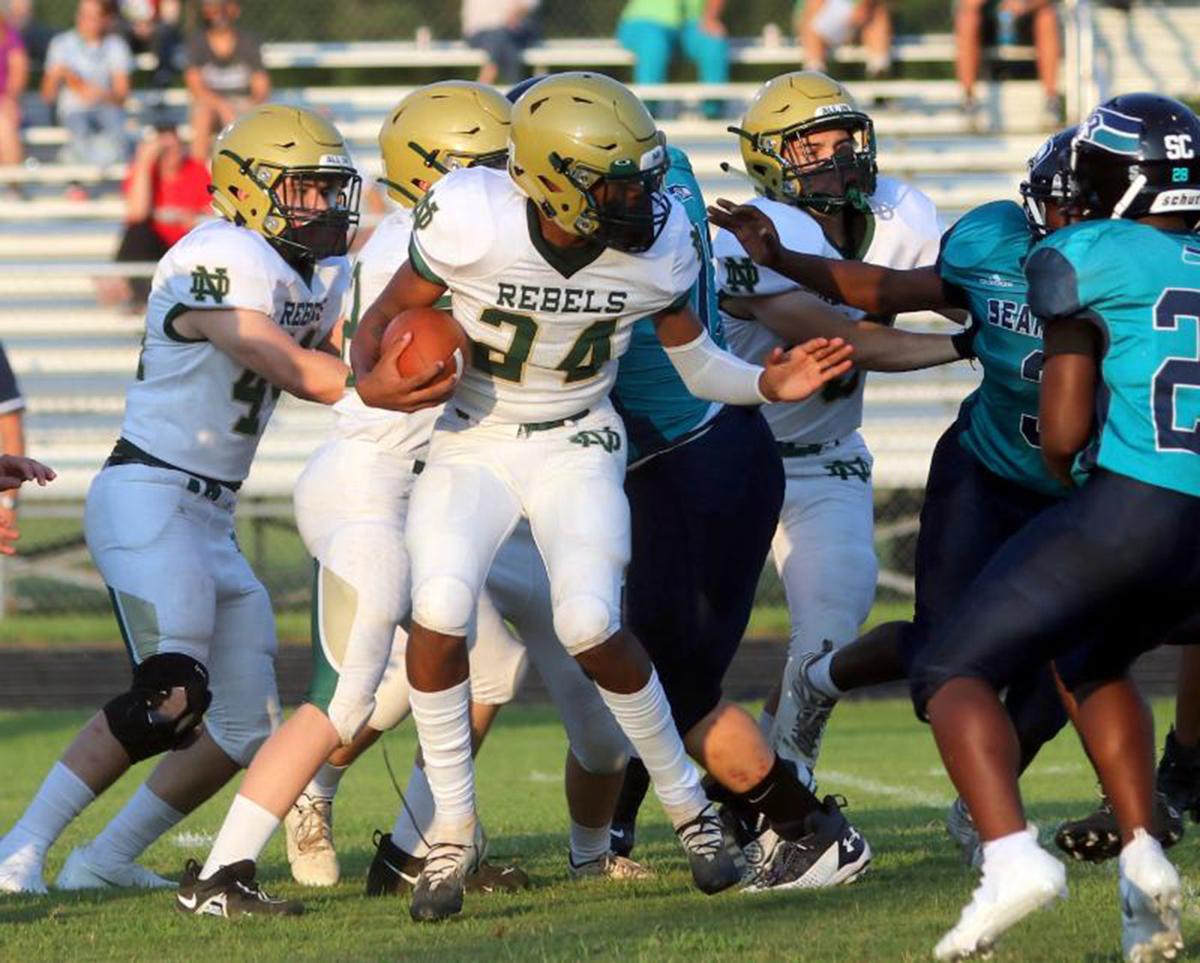 CALYPSO—Victory was sweet for North Duplin last Friday night after having opened the season with a pair of decisive losses.

The Rebels scored on their first possession of each half and made them stand up for a 12-0 triumph over Jones Senior.

The Trojans fell to their 36th straight loss going back to the first round of the 2016 playoffs, a season in which they had a 6-7 record.

“It’s always good to get that first win, and the boys were all very happy,” said Hugh Martin, beginning his 16th season as ND head coach and first as athletics director. “So many of our guys go both ways, though, they were pretty tired.

“They’ve been great kids, they’ve worked hard and had super attitudes on any changes and adjustments we’ve made. Very receptive.”

“We executed extremely well on our first drive, but a couple times after that, we had some mistakes and penalties.

“Then we came out after halftime and had a good drive after their turnover, and we busted Luis up the middle on the same play [for his second TD].”

New starting quarterback Luke Kelly, a freshman, passed eight yards to Levi George to start it. Then Olivos broke a 39-yard run to the 11 and scored from the 13 for a 6-0 lead with just over four minutes elapsed.

Early in the second quarter, the Trojans drove to the Rebels’ four-yard line. But the quarterback fumbled the ball through the end zone for a touchback, giving the home team possession at its 20.

North Duplin ran it in on six plays, with Olivos again sprinting the final 13 yards.

“Luke’s a freshman, and he and [sophomore] Branden Reyna have been working at quarterback,” Martin said.

“Luke got a few reps against Northside, and Friday he managed the offense well. As a freshman, there are always things to work on, just getting ball in the right places.

“On the first drive, he had a real good pass to Levi George [eight yards], then he wasn’t as sharp on others.

“Overall, our protection and routes have got to improve.”

Not to be lost in the Rebels’ first offensive-unit touchdowns in three games — the defense spun its first shutout in almost two calendar years.

“Coach [Jeff] Byrd did a super job getting the defense ready” Martin said. “We play a lot of the same players on offense and defense, so we rest some when we can.

“They do such a good job running the ball, and as linebackers they’re outstanding plugging holes.”

It was their first shutout of the Trojans since the schools’ first meeting in 1963 (9-0).

Since Camp Lejeune Marine Base doesn’t allow fans at the school’s athletic events under Covid-19 protocol, Martin made an inquiry about moving this Friday’s game to his school’s H.E. Grubbs Athletic Field.

“They want to keep the home game for their players, and we certainly understand that,” Martin said.

ND is 17-7 against Lejeune with six wins in a row.

• Luke Kelly completed two of four passes for 19 yards. Besides the 8-yarder to Levi George, he hit his brother Landen for 12 yards.

• The Rebels lead the series with Jones Senior 7-4 with three straight wins since the series resumed in 2019. The Rebels also had won two of three from 2006-08, making it five of the past six.

• ND’s 49-16 victory in the spring was the Trojans’ only game before shutting down for the season due to Covid-19.

• Olivos burst into prominence as a sophomore in 2019, scoring 20 touchdowns and running for 1,436 yards, averaging 119.7 per game and 6.5 per carry. He was named to that season’s Duplin’s Elite All-County first team at the Athlete position before sitting out the shortened spring season.

Bill Rollins can be reached at yorollo@yahoo.com.