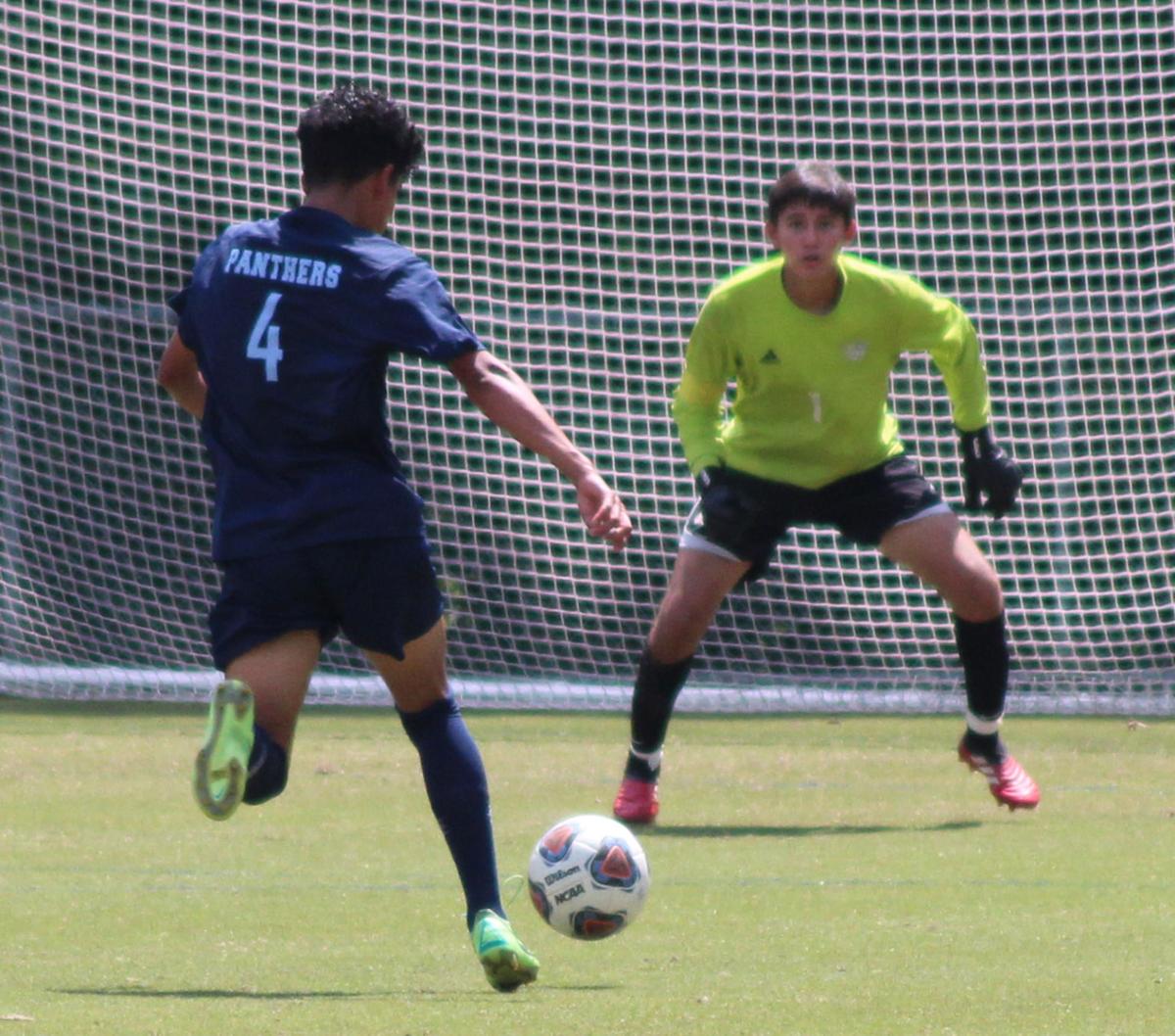 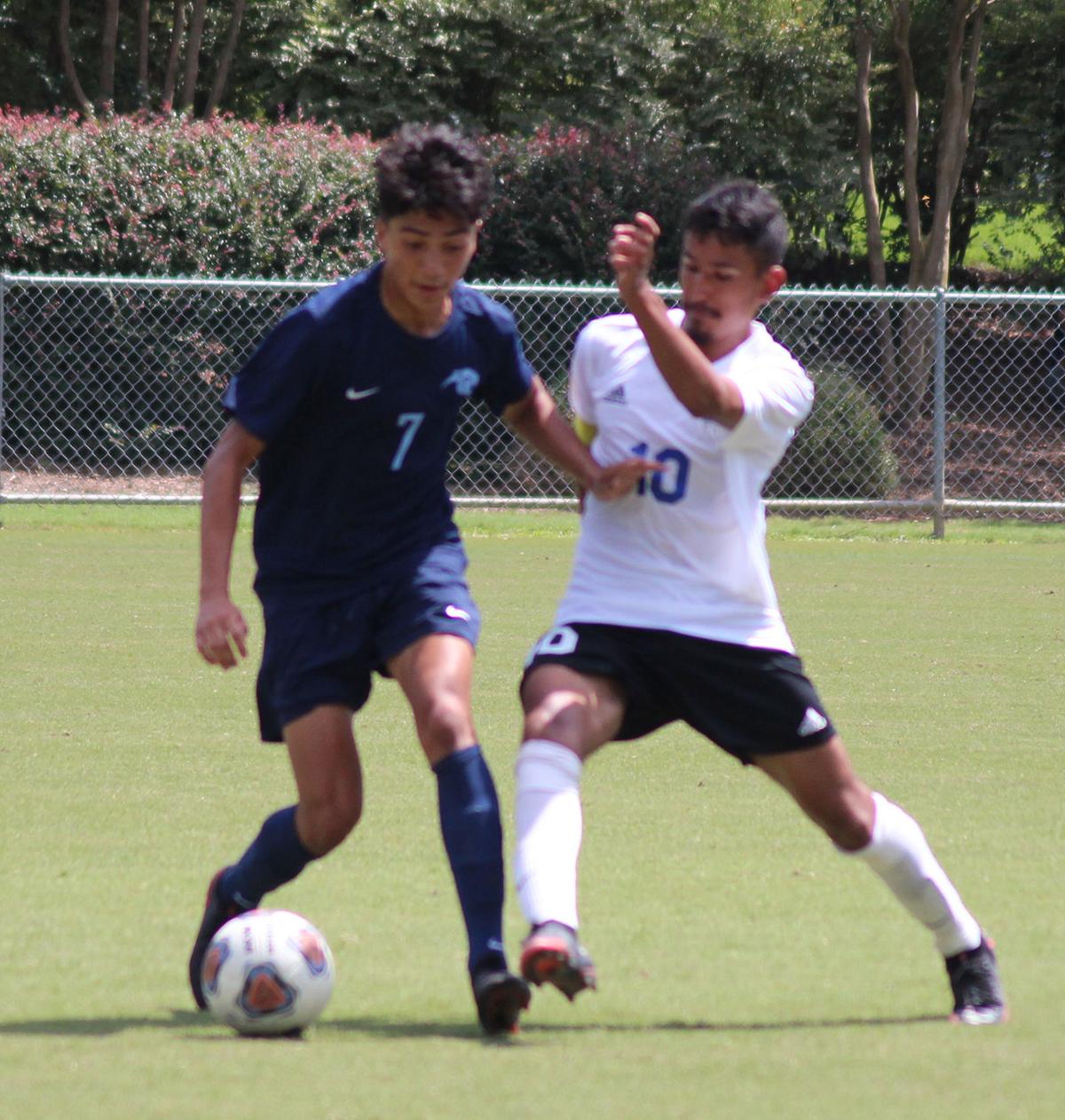 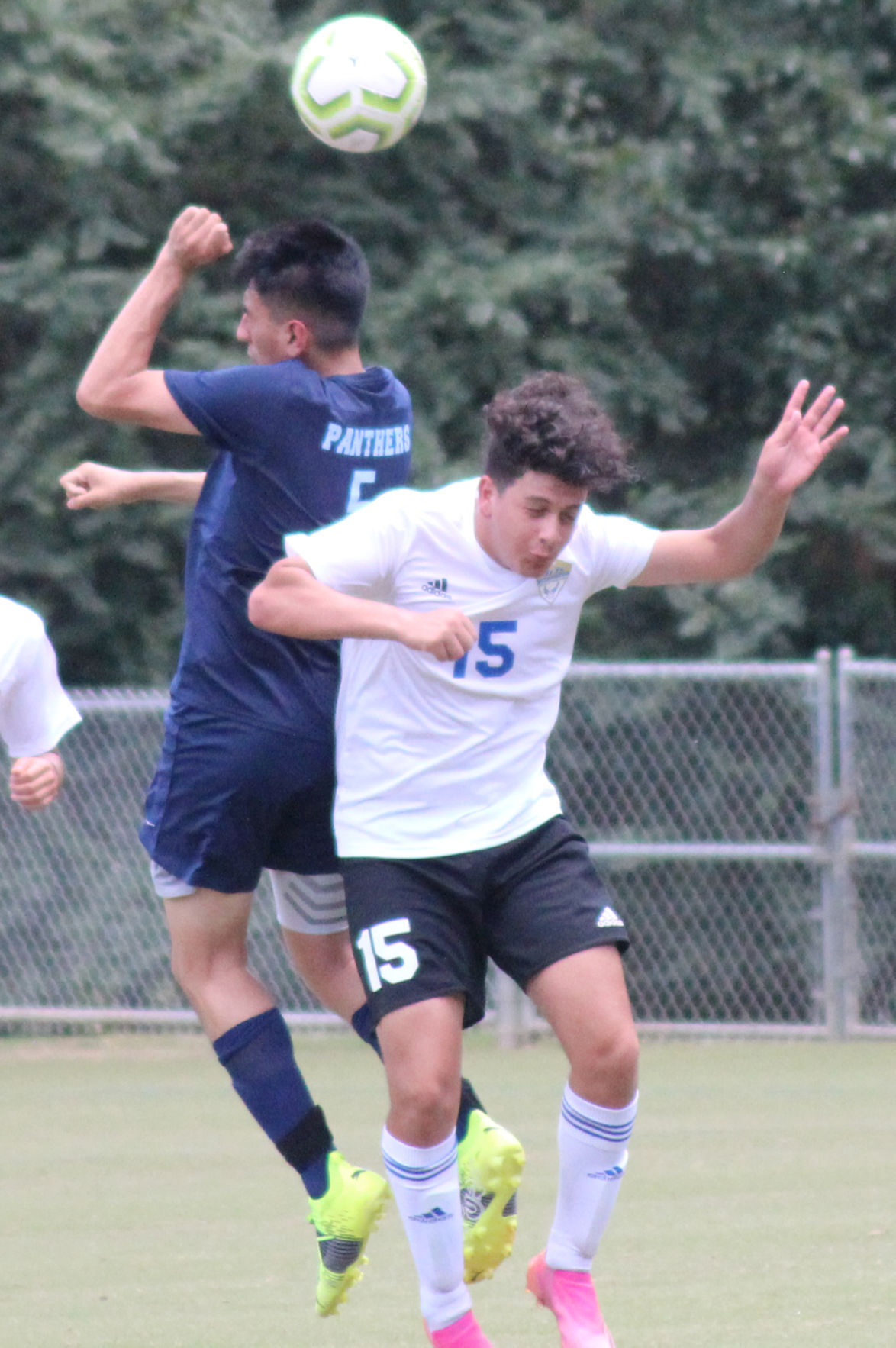 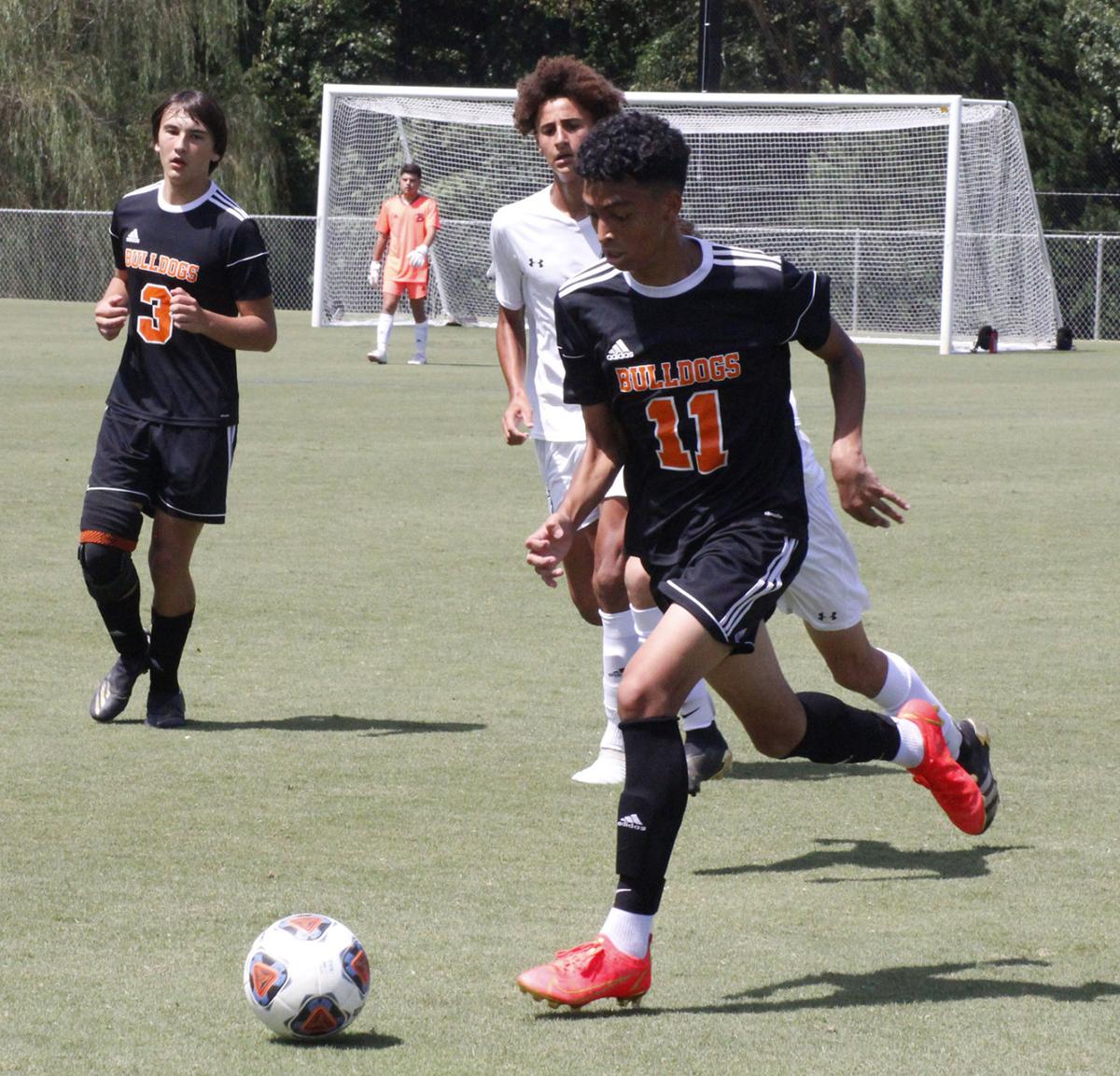 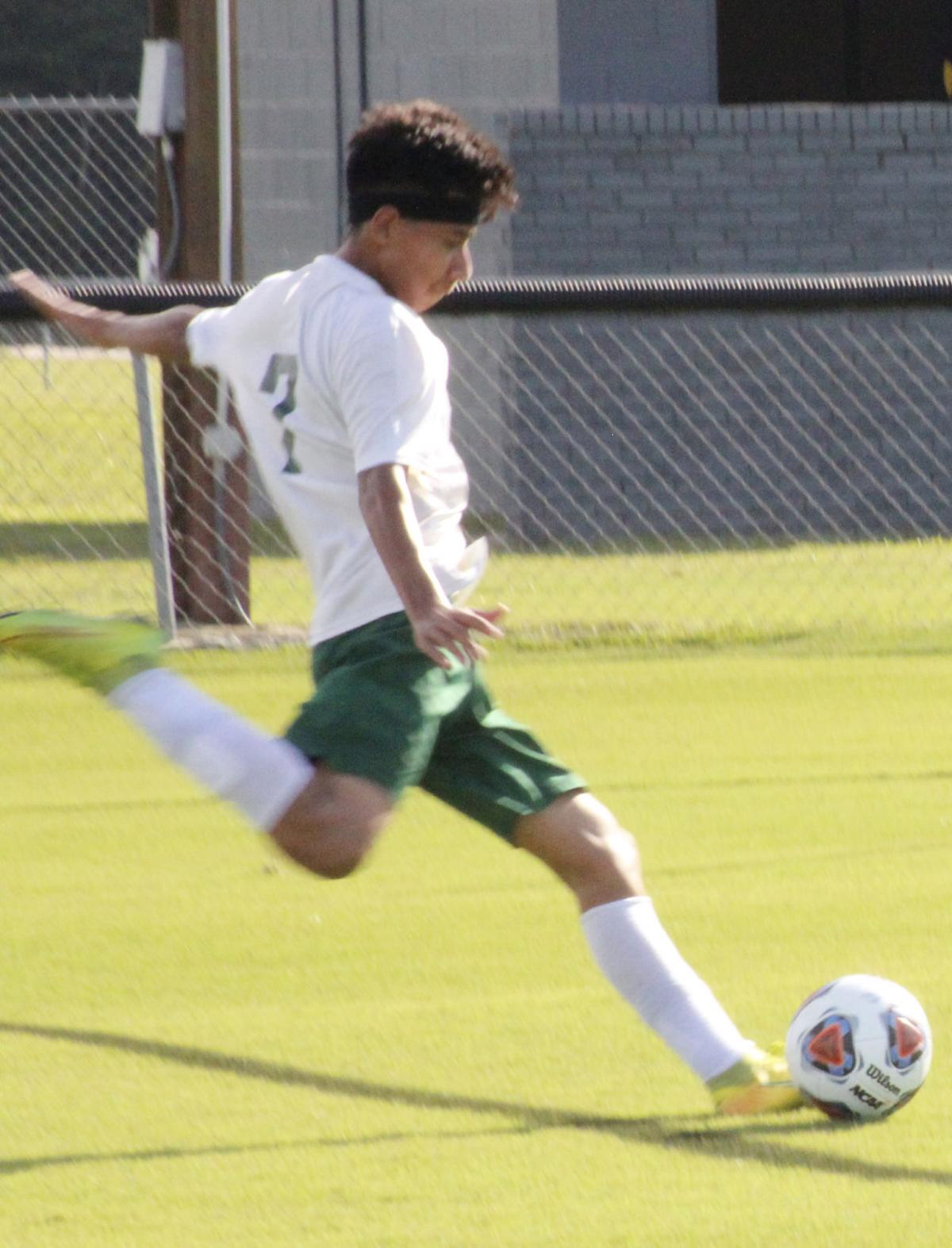 HARRELLS – Make room for another kind of football at Harrells Christian Academy.

The Crusaders, long known for prowess on the gridiron, are not the only game in town as the soccer team is experiencing a revival behind three seniors who stuck with the program, and a crop of underclassmen.

While HCA soccer can’t boast of 12 state championships as can the football team, it has gone from the bottom of the NCISAA to become a highly-ranked club.

“We have a pretty strong, yet young team,” said HCA coach Rodolfo Sandoval, a former player at Union High. “It feels good to finally be on the winning side. But we have to keep the hunger and find bigger goals. It’s great to start seeing the fruits of our labor.”

Sandoval is in his third season and is rebuilding the program with assistant coach Matthew Register, who is his boss at is 9 to 5 job and also a Union grad.

“We work together pretty well,” Sandoval said. “We think alike and make a good team.”

“They stayed during the time we lost so many games and that’s a special part of this whole thing,” Sandoval said. “We took a lot of beatings and they didn’t leave. That means a lot of me and says a lot about each of them.”

Max DiLelo and Jakob Funes are the lone juniors on a roster stockpiled with sophomores, freshmen, two eighth-graders — and even three from the seventh grade.

“We’re such a small school and don’t have the advantage of having a varsity, junior varsity and freshmen teams,” Sandoval said. “We have to put seventh and eighth graders out there, but it’s also made it a huge challenge.”

Size and speed are two disadvantages that those teams in the past had to overcome.

“We had to learn, and continue to play big, because we’re often facing teams that are bigger and faster,” Sandoval said.

Sophomores Edwin Gaspar and Heinze Mondrgon, and freshman Jose Julian Najera have risen to the challenge by combining for 25 goals and four assists.

HCA has scored 35 goals and given up just six this season for an average of nearly six goals in the opposition’s net per game.

“We probably scored 16 times last year and gave up 60 goals, and it was more like 91 given up the year before,” Sandoval said.

“We see the level we are playing at now and want to build for a championship run. As a program, we’re also concerned about seeing kids play in college. Last year one of our goals was to win a game and score goals. Things have changed.”

Mondragon notched a hat trick last Wednesday during a 7-0 clobbering of Epiphany in New Bern. Najera and Gaspar each had two scores and an assist, while freshman Daughtry Jackson pitched in with a pair of assists.

Two days later HCA jumped to a 3-0 lead, but fell to Parrott Academy 4-3 in overtime as Mondragon netted two goals with Gaspar adding the other score.

“We looked pretty solid most of the game and just didn’t take care of our opportunities,” Sandoval said. “I’m not extremely upset. We’ll be fine.”

Sandoval had gotten an glimpse of things to come during a two-day summer camp for young players.

Lately, HCA has specialized in on-field victories and appears to have its soccer program on a solid foundation.

Wallace-Rose Hill is back on track following a tough spring season.

The Bulldogs got a little more than a moral victory last week when they lost to Clinton 1-0 in Teachey.

Walker Spell set up Caleb Kennedy for the lone score in a match that was otherwise fairly even.

“It was a tough loss to a tough team,” said WRH coach Rodrigo Diaz. “My hat is off to coach (Brad) Spell and his Dark Horses. Well done.

“Our guys will bounce back and continue on with a successful season.”

WRH (2-2) and Clinton (5-2-1) were in the East Central 2A Conference for the previous four seasons and met twice a year. NCHSAA realignment moved Clinton to a league with Robeson and Bladen county schools. This is the only Dawgs and Horses matchup for the fall unless the two meet in the state playoffs.

Midway, also in the ECC until this fall, found a nonconference match against James Kenan to be much like what the Raiders experienced the past four seasons.

Eddie Maldonado fired in three goals to pace the Tigers to an 8-0 win in Warsaw.

“We played OK and at times pretty good,” said veteran James Kenan coach Mitchell Quinn, who was Duplin Elite’s Coach of the Year in the spring, a season moved from the fall of 2020 by the Covid-19 pandemic. “We still need to work on utilizing the whole field.”

JK’s lone match this week is today (Thursday) in Wilson against Snow Hill. The Tigers fell to the Rams 3-2 on Aug. 24 in Warsaw.

The Tigers open up ECC play on Sept. 13 against county rival East Duplin.

East Duplin recovered from last Tuesday’s 4-1 loss to Croatan with a 7-1 win over Wilson Prep the following day.

The unbeaten Bulldogs held a 2-1 halftime lead before notching two more in the second half, the last of which came off a penalty kick. Leo Venegas knotted the score for ED with an assist from Javire Arevalo. Croatan captured the 2A state title in the spring.

North Duplin, a 1A school, stepped up a classification for the second straight match last Monday and played more competitively than in its previous outing.

Junior Geovanie Ayala and sophomore Anthony Mejia scored goals, but the Rebels fell to 2A Midway 4-2 in Spivey’s Corner.

The Rebels’ previous loss was to James Kenan on Aug. 18 in a lopsided 14-0 match.

ND (0-2) was to have a rematch with the Raiders on Tuesday in Calypso and then host South Lenoir today (Thursday).