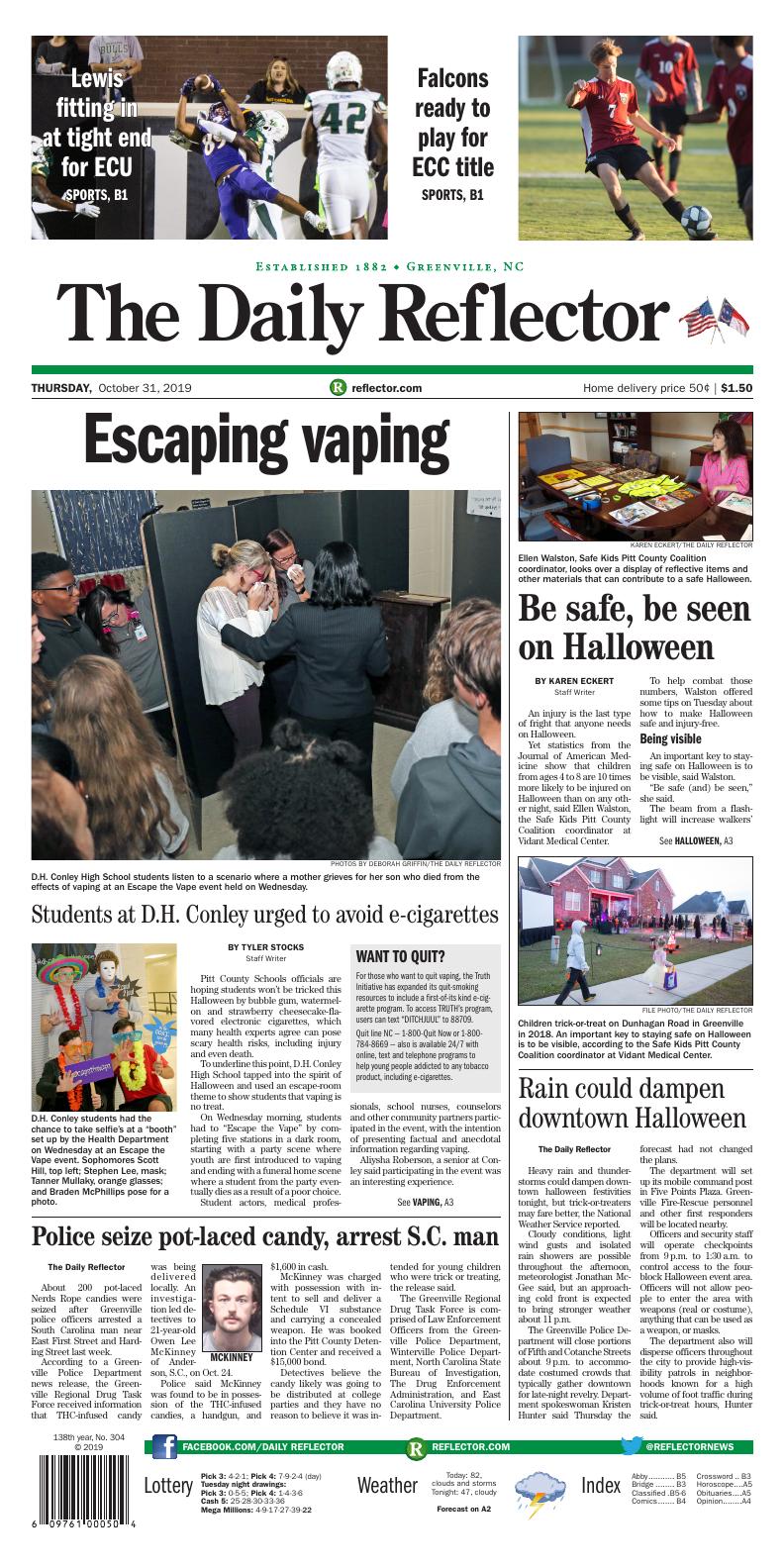 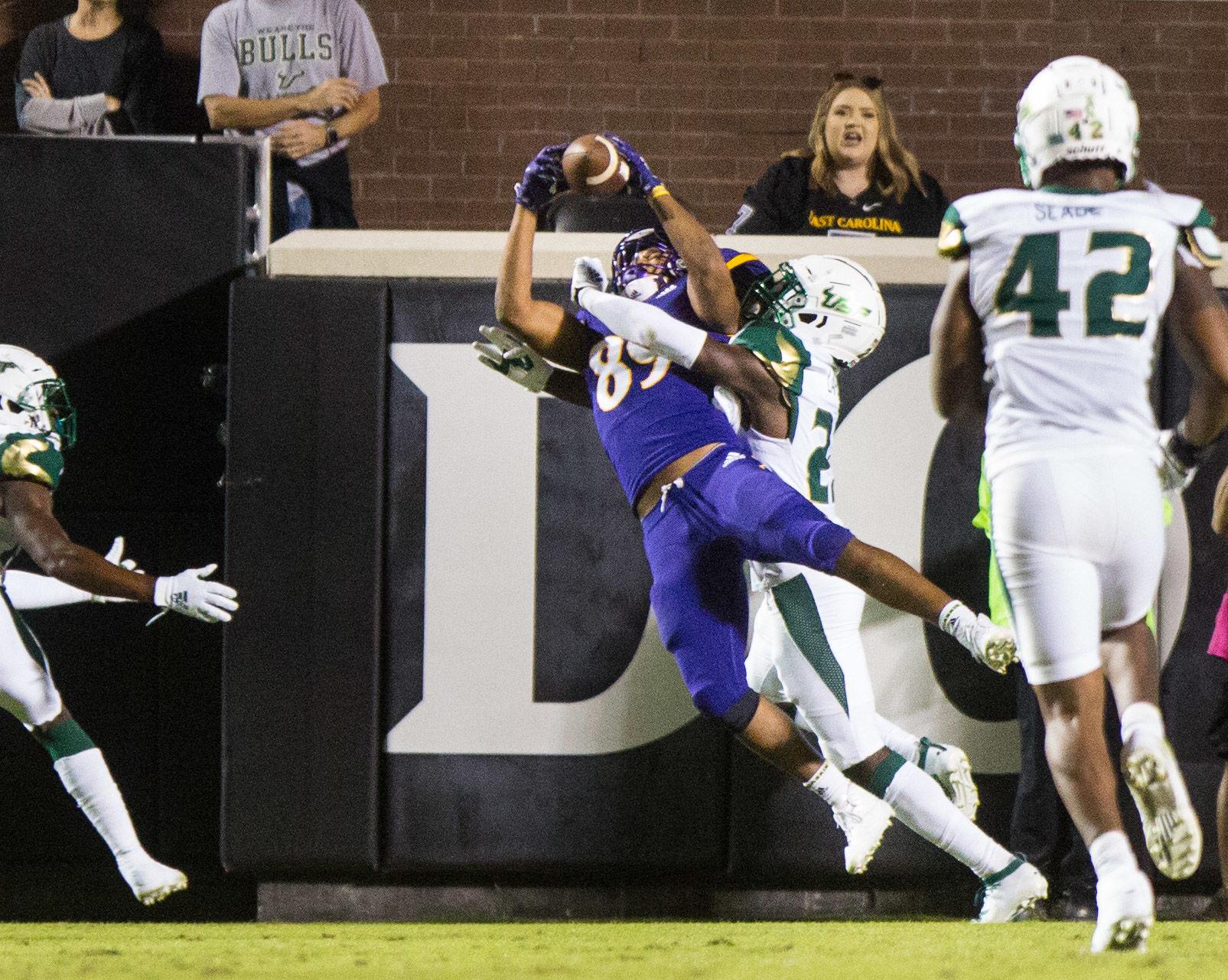 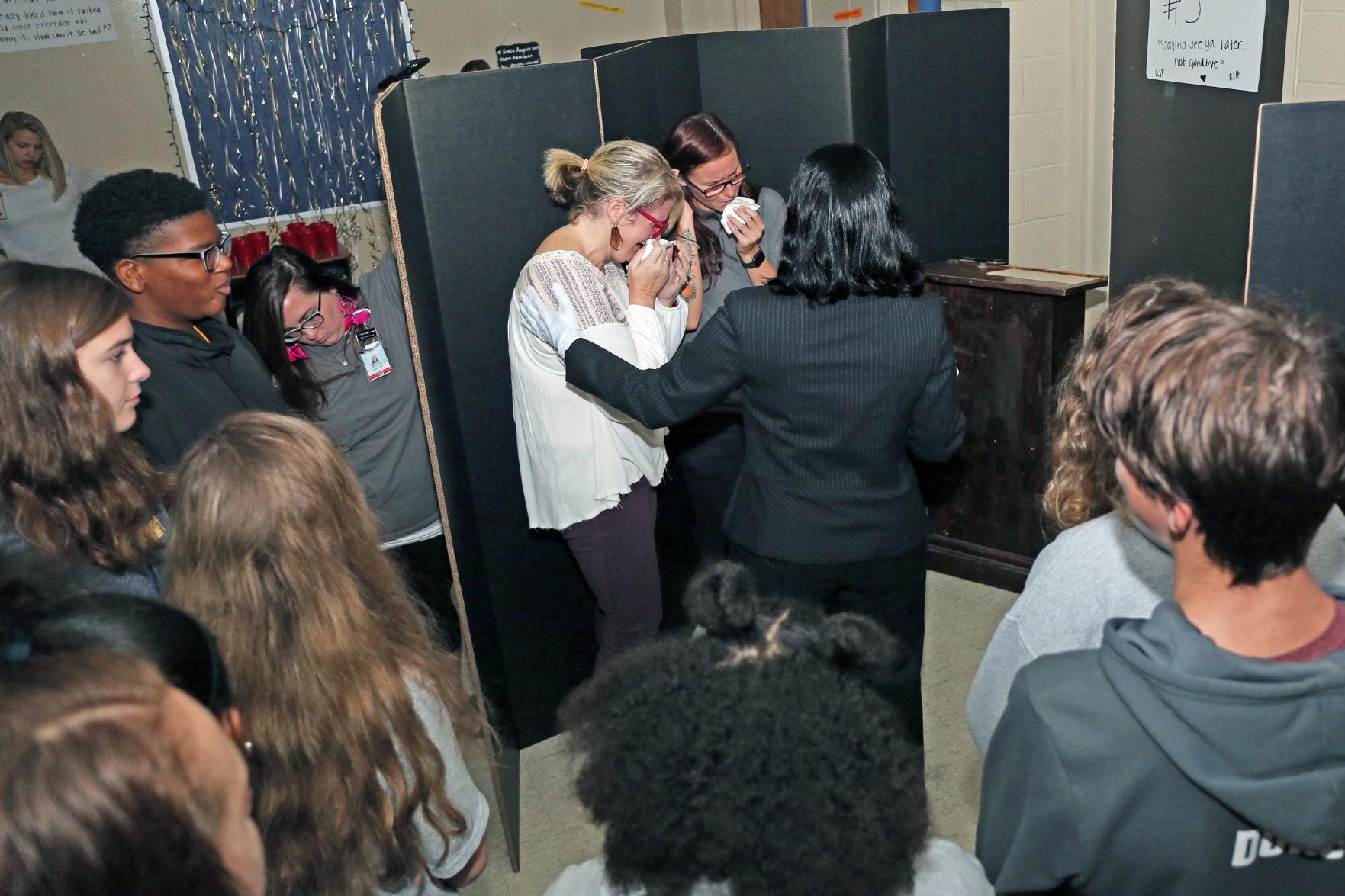 D.H. Conley High School students listen to a scenario where a mother grieves for her son who died from the effects of vaping at an Escape the Vape event held on Wednesday.

Pitt County Schools officials are hoping students won’t be tricked this Halloween by bubble gum, watermelon and strawberry cheesecake-flavored electronic cigarettes, which many health experts agree can pose scary health risks, including injury and even death.

To underline this point, D.H. Conley High School tapped into the spirit of Halloween and used an escape-room theme to show students that vaping is no treat.

On Wednesday morning, students had to “Escape the Vape” by completing five stations in a dark room, starting with a party scene where youth are first introduced to vaping and ending with a funeral home scene where a student from the party eventually dies as a result of a poor choice.

Student actors, medical professionals, school nurses, counselors and other community partners participated in the event, with the intention of presenting factual and anecdotal information regarding vaping.

Aliysha Roberson, a senior at Conley said participating in the event was an interesting experience.

“I don’t vape personally but I know people who do, so it puts things into perspective of how this could actually be the outcome of vaping harsh chemicals,” Roberson said.

“Vaping is very similar to actually smoking cigarettes, which I knew personally,” she said. “Just like drinking and smoking at a young age, vaping has harmful effects on young kids’ bodies.”

Roberson said that since participating in the event, she plans to help her friends quit vaping.

“Try your best to quit because you don’t want to end up like the example that was in the event,” she said.

Escape the Vape started as a vision to educate students during their lunch period. But due to a sense of urgency by D.H. Conley Principal Don Marrr and after six months of planning, it evolved into a more immersive event.

Deb Pomeroy, coordinator of the Pitt County chapter of Students Against Destructive Decisions said she hopes events like this can deter students from vaping without using fear or punishment.

“My mission is to get these kids to think before they’re doing this,” Pomeroy said. “Our lungs weren’t made to have any of this stuff put in it. Anything that goes in our lungs needs to be sterile. I don’t know that we can say any of it is safe.”

Pomeroy said that the main problem with vaping among teenagers is that when they use e-cigarettes they are getting too much nicotine at one time, which can lead to them becoming addicted to the drug, or experiencing seizures and other medical emergencies.

“They’re just getting too much nicotine too fast,” she said. “Kids are getting more nicotine than their brain can handle.”

Some e-cigarette cartridges or pods have high levels of nicotine and Pomeroy said most people go through one or two of them each day.

Statewide, the number of cases of severe lung injury associated with e-cigarette use continues to rise, with 61 cases in people ranging in age from 13 to 72, data from the Centers for Disease Control and Prevention reported.

The biennial 2017 North Carolina Youth Tobacco Survey found that although cigarette smoking is the lowest ever recorded among high school students at 8.9 percent, e-cigarette use has increased 894 percent since 2011. E-cigarettes have become the most commonly used tobacco product among youth in North Carolina and 9.6 percent of high school students report having vaped cannabis. This rate is expected to rise.

“This severe lung disease epidemic and the rise in youth use of e-cigarettes is deeply troubling,” said Dr. Elizabeth Tilson, state health director and chief medical officer for DHHS. “As a pediatrician, I know that nicotine can harm areas of the brain that influence attention, learning, mood and impulse control. Nicotine use at a young age can also rewire pathways in the brain, priming it for future addiction — to nicotine and other substances.”

Greenville police seized 200 pieces of pot laced candy along with a handgun and $1,600 during a drug bust Thursday.

Greenville police seized 200 pieces of pot laced candy along with a handgun and $1,600 during a drug bust Thursday.

Police said McKinney was found to be in possession of the THC-infused candies, a handgun, and $1,600 in cash.

McKinney was charged with possession with intent to sell and deliver a Schedule VI substance and carrying a concealed weapon. He was booked into the Pitt County Detention Center and received a $15,000 bond.

Detectives believe the candy likely was going to be distributed at college parties and they have no reason to believe it was intended for young children who were trick or treating, the release said. 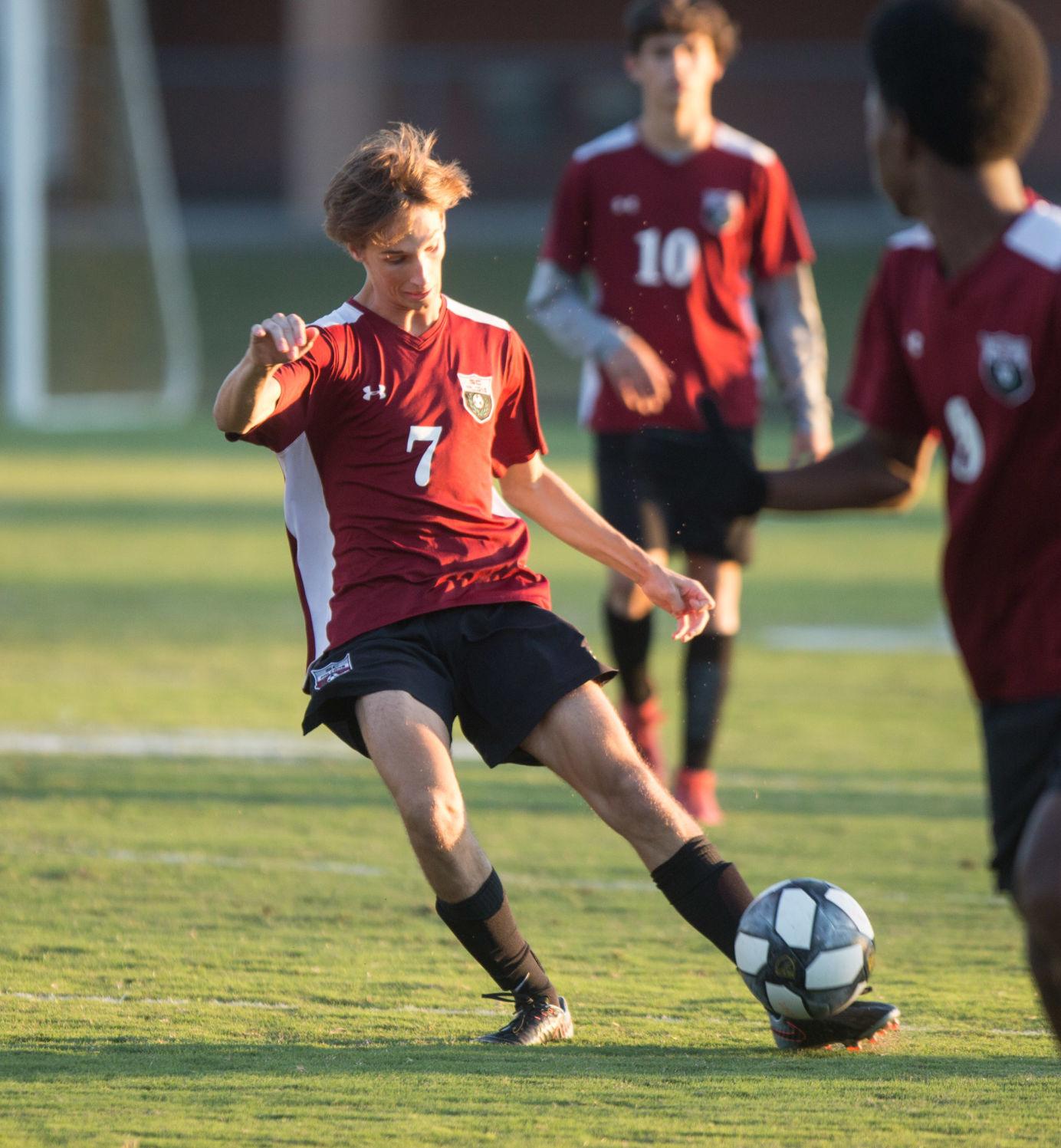 South Central's Riley Morse takes the ball down the field during a game against New Bern on Oct. 17, 2019.

Ellen Walston, Safe Kids Pitt County Coalition coordinator, looks over a display of reflective items and other materials that can contribute to a safe Halloween.

Children trick-or-treat on Dunhagan Road in Greenville in 2018. An important key to staying safe on Halloween is to be visible, according to the Safe Kids Pitt County Coalition coordinator at Vidant Medical Center.

An injury is the last type of fright that anyone needs on Halloween.

Yet statistics from the Journal of American Medicine show that children from ages 4 to 8 are 10 times more likely to be injured on Halloween than on any other night, said Ellen Walston, the Safe Kids Pitt County Coalition coordinator at Vidant Medical Center.

To help combat those numbers, Walston offered some tips on Tuesday about how to make Halloween safe and injury-free.

An important key to staying safe on Halloween is to be visible, said Walston.

The beam from a flashlight will increase walkers’ visibility, allowing them to be seen more readily by oncoming cars.

Walston recommended that parents use the built-in flashlight on their smartphones as an alternative to carrying an old-school flashlight, although a traditional flashlight is still a good idea, she said.

The light can also be used to illuminate the children’s way as they make their rounds to and from each house.

Tripping and falling is another way that injuries occur on Halloween, Walston said.

Walston encourages parents to don safety vests, such as the type that night joggers wear.

The Eastern Carolina Injury Prevention Program at Vidant Medical Center can provide reflective items, such as wrist bands and bags, as well as literature, to groups who are interested in promoting Halloween safety at fall festivals, trunk-or-treats, or other events held at churches or other organizations, Walston said.

Walston said that just last week she had distributed materials at a United Way event held at the Town Common.

In addition to being visible to others, trick or treaters and their parents also need to be alert and aware of their surroundings, Walston said.

While smartphones can be helpful with their built-in flashlights, they also can be a distraction, Walston said.

“There has been a 33 percent increase in pedestrian deaths since 2009,” Walston said. “In 2018 more pedestrians and cyclists were fatally struck more than any year since 1990.”

She wants parents to stay focused on their children and the places they are walking.

Avoid being a “petextrian,” someone who walks and texts at the same time, she said.

Children need to be aware of their surroundings also, for example by watching out for cars before crossing streets, Walston said.

“Look left, right and left again,” Walston said. “(Children) remember the left and the right, but they forget to look left again, and usually that’s where the car’s coming ... from their left, again,” she said.

They should also learn the importance of catching a driver’s eye.

It can be difficult to do at night, but it is extremely important, Walston said.

“Children take (it) for granted that the driver sees them,” she said. But they shouldn’t.

“It’s so important that (walkers) make eye contact with the driver,” Walston said.

Walston also recommends that children do not wear masks over their faces, but wear face paint instead. A mask can get in the way of the child being able to see, she said.

It’s not just the children and their parents who need to stay alert. Drivers also need to be careful.

When Halloween falls on a weeknight, as it does this year, trick or treaters often appear on streets at dusk, just about the time drivers are heading home from work.

Drivers should not be texting, talking on the phone or anything that would cause a distraction, Walston said.

They also need to slow down. Speed is one of the biggest factors in crashes, she said.

It all comes down to paying attention, Walston said.

“(Halloween) is such a fun holiday for so many children, just to have the opportunity to dress up and collect candy and be with their friends in their neighborhoods,” she said, “but unfortunately, it is the most deadly day of the year for children.

Tips from the Sheriff's Office

for Trick or Treaters:

■ Carry a flashlight or glow stick with you to help keep you safe and visible.

■ If the lights are out at a house, skip it.

■ Carry a cell phone with you to stay in touch with your parents and/or ride.

■ Take your time! Always look before crossing the street.

■ Let your parents check your candy before digging in.

■ Don't accept homemade treats except from known friends and family as approved by your parents.

■ Accompany your children as they trick or treat.

■ Set boundaries for your child regarding distances and neighborhoods allowed.

■ Check your children's candy to assure safety and appropriateness.

■ Set time limits for your children.

■ Realistic-looking firearm props or other similar weapons shouldn't be allowed.

The Greenville Police Department will close portions of Fifth and Cotanche Streets about 9 p.m. to accommodate costumed crowds that typically gather downtown for late-night revelry. Department spokeswoman Kristen Hunter said Thursday the forecast had not changed the plans.

The department will set up its mobile command post in Five Points Plaza. Greenville Fire-Rescue personnel and other first responders will be located nearby.

Officers and security staff will operate checkpoints from 9 p.m. to 1:30 a.m. to control access to the four-block Halloween event area. Officers will not allow people to enter the area with weapons (real or costume), anything that can be used as a weapon, or masks.

The department also will disperse officers throughout the city to provide high-visibility patrols in neighborhoods known for a high volume of foot traffic during trick-or-treat hours, Hunter said. 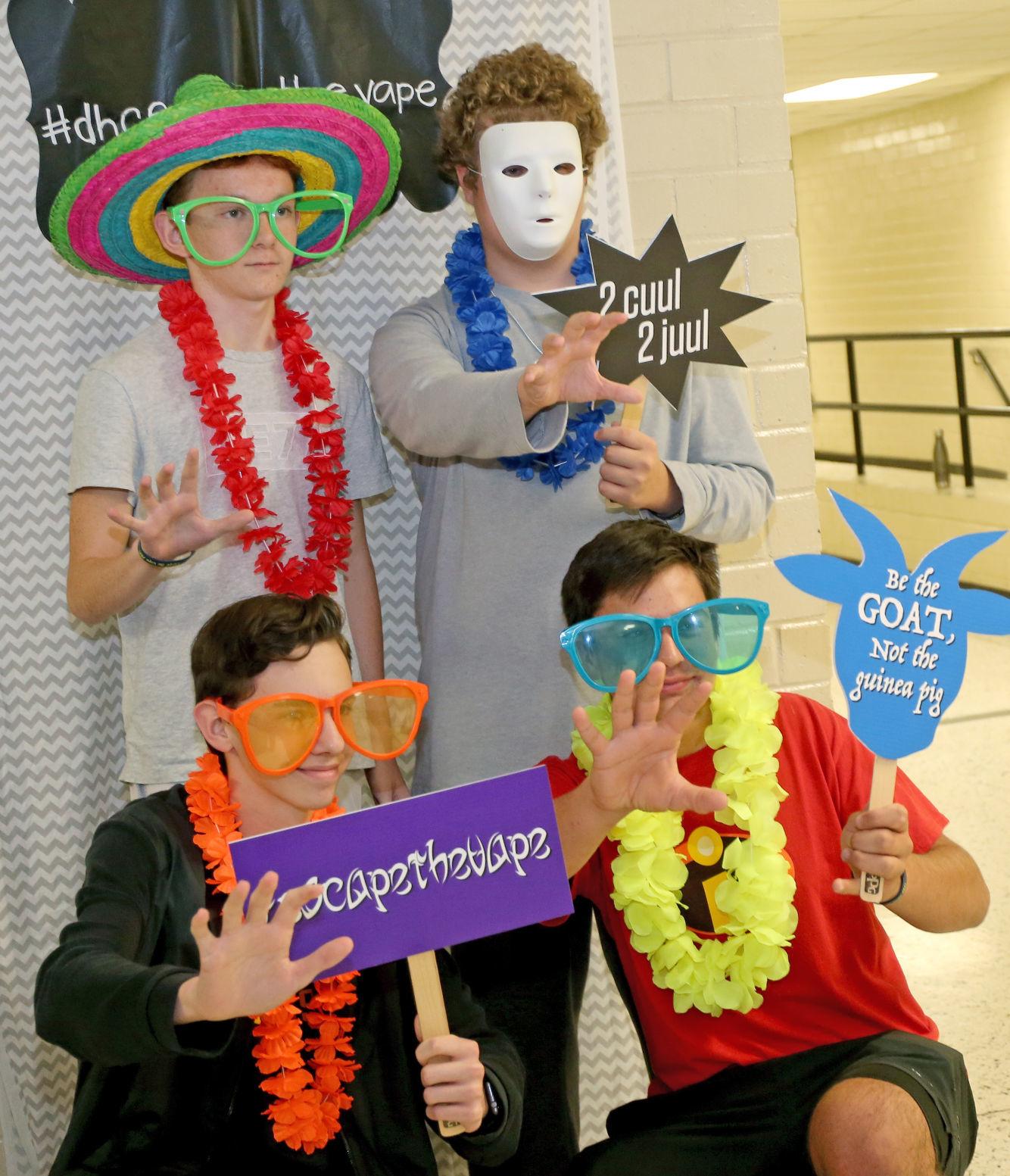 D.H. Conley students had the chance to take selfie’s at a “booth” set up by the Health Department on Wednesday at an Escape the Vape event. Sophomores Scott Hill, top left; Stephen Lee, mask; Tanner Mullaky, orange glasses; and Braden McPhillips pose for a photo. 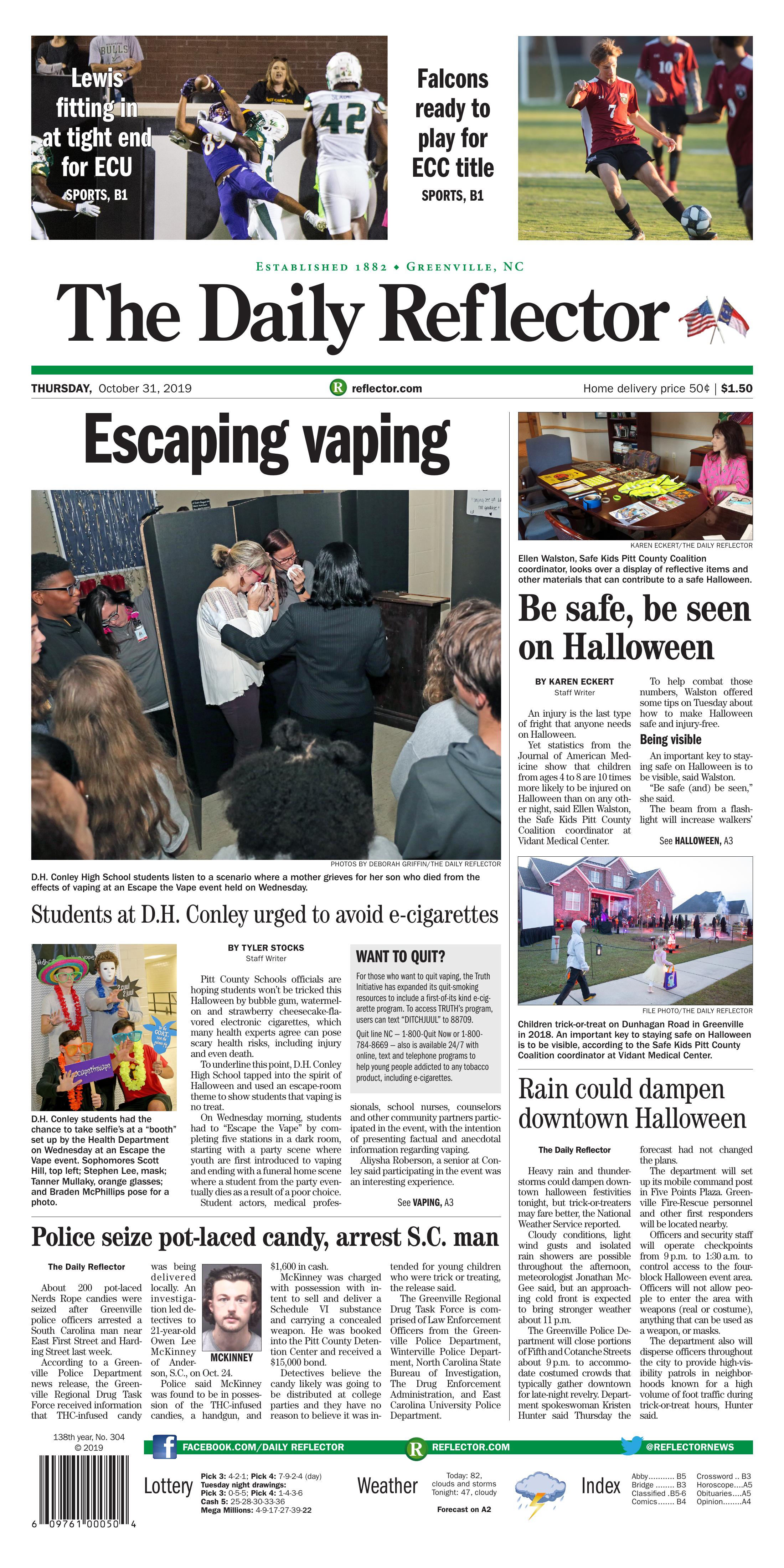