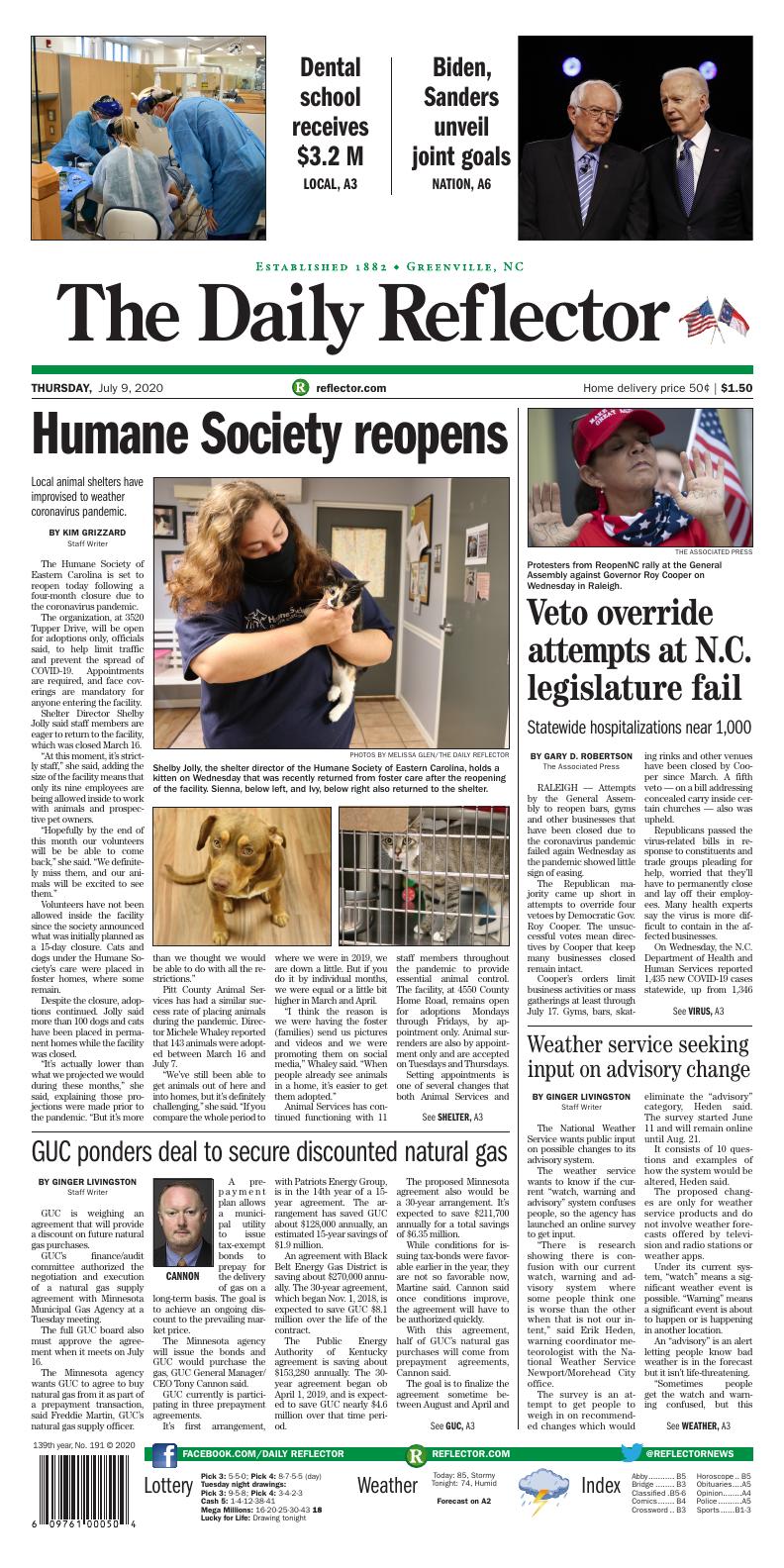 Shelby Jolly, the shelter director of the Humane Society of Eastern Carolina, holds a kitten on Wednesday that was recently returned from foster care after the reopening of the facility. Sienna, below left, and Ivy, below right also returned to the shelter.

A dog pokes his head through his cage on Wednesday at the Humane Society of Eastern Carolina.

Brittany Thompson, a worker at the Human Society of Eastern Carolina, plays with a kitten on Wednesday in the front office.

Sienna, a dog who recently returned from foster care, sits on Wednesday in the office of the Humane Society of Eastern Carolina.

Shelby Jolly, the shelter director for the Humane Society of Eastern Carolina, gives a treat to Sienna, a dog who was recently returned to the shelter from foster care.

Ivy, a recent foster return, stands in her cage on Wednesday at the Humane Society of Eastern Carolina.

Brittany Thompson, a worker at the Humane Society of Eastern Carolina, puts a kitten back in her cage on Wednesday.

The Humane Society of Eastern Carolina is set to reopen today following a four-month closure due to the coronavirus pandemic.

The organization, at 3520 Tupper Drive, will be open for adoptions only, officials said, to help limit traffic and prevent the spread of COVID-19. Appointments are required, and face coverings are mandatory for anyone entering the facility.

Shelter Director Shelby Jolly said staff members are eager to return to the facility, which was closed March 16.

“At this moment, it’s strictly staff,” she said, adding the size of the facility means that only its nine employees are being allowed inside to work with animals and prospective pet owners.

“Hopefully by the end of this month our volunteers will be be able to come back,” she said. “We definitely miss them, and our animals will be excited to see them.”

Volunteers have not been allowed inside the facility since the society announced what was initially planned as a 15-day closure. Cats and dogs under the Humane Society’s care were placed in foster homes, where some remain.

Despite the closure, adoptions continued. Jolly said more than 100 dogs and cats have been placed in permanent homes while the facility was closed.

“It’s actually lower than what we projected we would during these months,” she said, explaining those projections were made prior to the pandemic. “But it’s more than we thought we would be able to do with all the restrictions.”

Pitt County Animal Services has had a similar success rate of placing animals during the pandemic. Director Michele Whaley reported that 143 animals were adopted between March 16 and July 7.

“We’ve still been able to get animals out of here and into homes, but it’s definitely challenging,” she said. “If you compare the whole period to where we were in 2019, we are down a little. But if you do it by individual months, we were equal or a little bit higher in March and April.

“I think the reason is we were having the foster (families) send us pictures and videos and we were promoting them on social media,” Whaley said. “When people already see animals in a home, it’s easier to get them adopted.”

Animal Services has continued functioning with 11 staff members throughout the pandemic to provide essential animal control. The facility, at 4550 County Home Road, remains open for adoptions Mondays through Fridays, by appointment only. Animal surrenders are also by appointment only and are accepted on Tuesdays and Thursdays.

Setting appointments is one of several changes that both Animal Services and the Humane Society have made because of the pandemic. To meet distancing requirements, both organizations are limiting the number of people permitted to attend adoption appointments.

In addition, both have temporarily discontinued programs that permit volunteers to take dogs out of their facilities to spend a few hours socializing with people and other pets. The Humane Society is hoping to resume Doggy Field Trips when volunteers return. Animal Services has discontinued Doggy Day Out but recently launched “Staycations” for dogs, allowing people to register to take an animal for a weekend visit to the family’s home.

Animal Services is not accepting applications for new volunteers, and existing volunteers are working alone or in small groups, primarily outside.

“Nationally in talking to different shelters, a lot of them are saying they probably won’t go back to what their operations were,” Whaley said. “There probably will be some long-standing policy changes as far as animal sheltering goes. We’re still learning. We’re still adapting.”

Jolly said that requiring appointments rather than accepting walk-ins allows Humane Society staff members to focus their efforts on people who are serious about adopting a pet rather than on those who simply want to stop in to view puppies or kittens. Prior to being allowed to schedule a 30-minute appointment with the Humane Society, potential adopters must have already submitted and received approval for an adoption application.

While Jolly is glad to see that spending more time at home during the pandemic has caused some people to choose to add a pet, she cautions that families need to consider what the pet’s home life will look like in the future.

“We just really want people to think about eventually, hopefully, you’ll go back to work,” she said.

“If you’re adopting because you’re free and you can do whatever you want now, we make sure that you realize that eventually we’ll go back. We want to make sure that animal fits your life when everything goes back to normal or a new normal.”

GUC is weighing an agreement that will provide a discount on future natural gas purchases.

GUC’s finance/audit committee authorized the negotiation and execution of a natural gas supply agreement with Minnesota Municipal Gas Agency at a Tuesday meeting.

The full GUC board also must approve the agreement when it meets on July 16.

A prepayment plan allows a municipal utility to issue tax-exempt bonds to prepay for the delivery of gas on a long-term basis. The goal is to achieve an ongoing discount to the prevailing market price.

The Minnesota agency will issue the bonds and GUC would purchase the gas, GUC General Manager/CEO Tony Cannon said.

It’s first arrangement, with Patriots Energy Group, is in the 14th year of a 15-year agreement. The arrangement has saved GUC about $128,000 annually, an estimated 15-year savings of $1.9 million.

An agreement with Black Belt Energy Gas District is saving about $270,000 annually. The 30-year agreement, which began Nov. 1, 2018, is expected to save GUC $8.1 million over the life of the contract.

The Public Energy Authority of Kentucky agreement is saving about $153,280 annually. The 30-year agreement began ob April 1, 2019, and is expected to save GUC nearly $4.6 million over that time period.

The proposed Minnesota agreement also would be a 30-year arrangement. It’s expected to save $211,700 annually for a total savings of $6.35 million.

While conditions for issuing tax-bonds were favorable earlier in the year, they are not so favorable now, Martine said. Cannon said once conditions improve, the agreement will have to be authorized quickly.

With this agreement, half of GUC’s natural gas purchases will come from prepayment agreements, Cannon said.

The goal is to finalize the agreement sometime between August and April and accept the first gas delivery between October and April.

If GUC’s natural gas demands do not require the amount authorized in the deal, Cannon said the Minnesota agency will sell the excess.

“I don’t think that is good for us,” Cannon said.

He said it will tighten demand for space on the Transco pipeline that supplies natural gas to from the Gulf Coast states to Georgia, South Carolina, North Carolina, Virginia, Maryland and Pennsylvania.

GUC may have to look at expanding its liquid natural gas storage facilities, Cannon said. 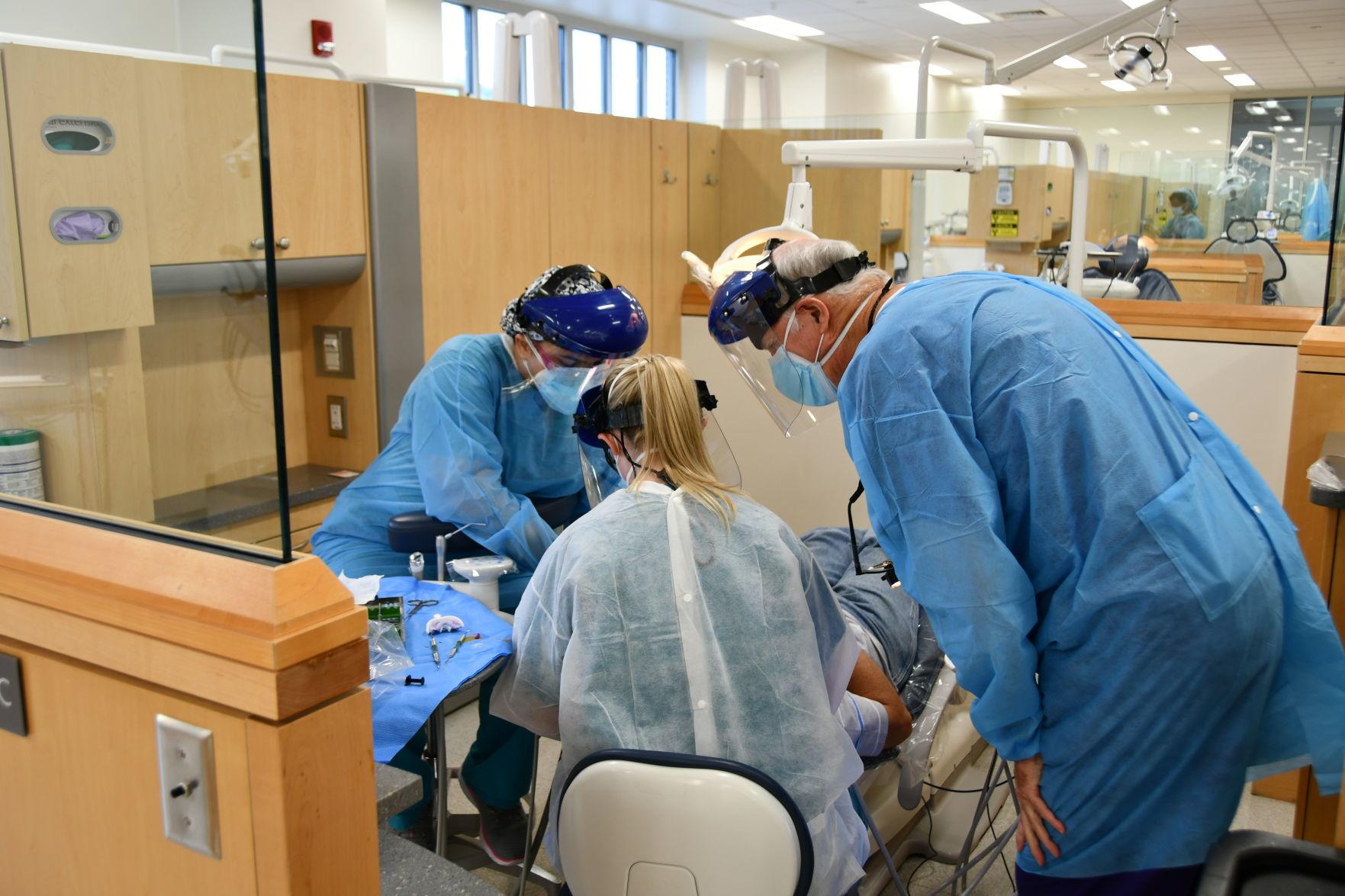 ECU School of Dental Medicine students work with a faculty member to care for a patient at the school’s clinic in Greenville. The school has received a $3.2 million grant to fund scholarships for disadvantaged students.

The weather service wants to know if the current “watch, warning and advisory” system confuses people, so the agency has launched an online survey to get input.

“There is research showing there is confusion with our current watch, warning and advisory system where some people think one is worse than the other when that is not our intent,” said Erik Heden, warning coordinator meteorologist with the National Weather Service Newport/Morehead City office.

The survey is an attempt to get people to weigh in on recommended changes which would eliminate the “advisory” category, Heden said. The survey started June 11 and will remain online until Aug. 21.

It consists of 10 questions and examples of how the system would be altered, Heden said.

The proposed changes are only for weather service products and do not involve weather forecasts offered by television and radio stations or weather apps.

An “advisory” is an alert letting people know bad weather is in the forecast but it isn’t life-threatening.

Under the proposed change the “watch” and “warning” language would remain but “advisory” along with headlines such as “special weather station” or “short-term forecast” would be eliminated and “plain language statements” will be used.

In one example on the survey website, a winter weather advisory usually starts with the headline “... WINTER WEATHER ADVISORY IN EFFECT FROM 4 AM TO 11 AM CST SATURDAY …”

Under the proposed change the advisory would begin with “... Light snow accumulation from 4 AM to 11 AM CST Saturday …”

According to the survey website, the simplified system of issuing just watches or warnings is a better match to the “prepare or act” operational structure used by community emergency managers throughout the country.

The nationwide survey can be found at weather.gov/moreheadcity under news headlines. 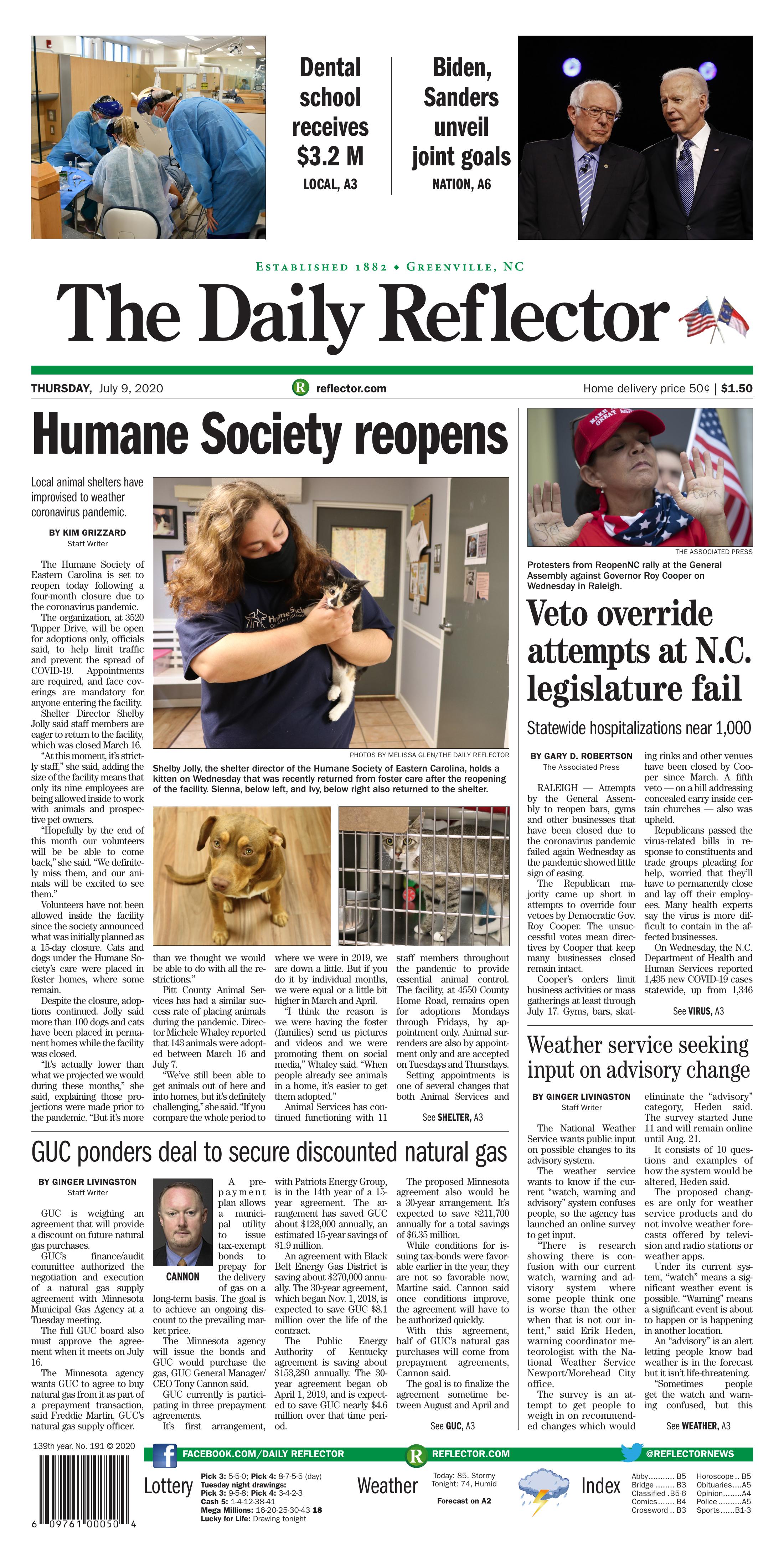