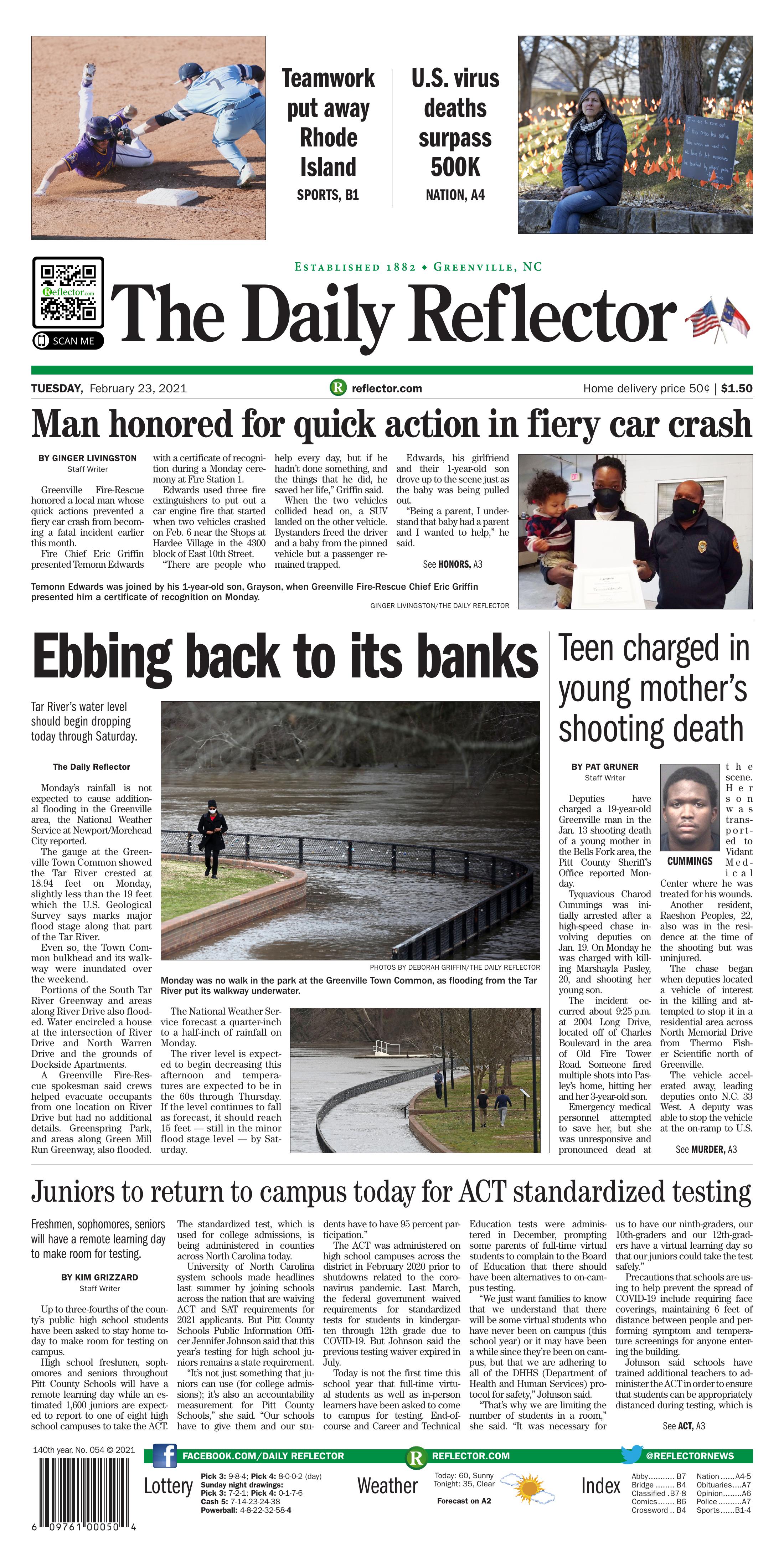 CORRECTS SPELLING OF LAST NAME ON FIRST REFERENCE — Cindy Pollock poses for a portrait in Boise, Idaho, on Wednesday, Feb. 10, 2021. Pollock began planting the tiny flags across her yard — one for each of the more than 1,800 Idahoans killed by COVID-19 — the toll was mostly a number. Until two women she had never met rang her doorbell in tears, seeking a place to mourn the husband and father they had just lost. (AP Photo/Otto Kitsinger)

Temonn Edwards was joined by his 1-year-old son, Grayson, when Greenville Fire-Rescue Chief Eric Griffin presented him a certificate of recognition on Monday.

Greenville Fire-Rescue Chief Eric Griffin presents Temonn Edwards with a certificate of recognition for extinguishing an engine fire while a woman remained trapped in the vehicle.

Fire Chief Eric Griffin presented Temonn Edwards with a certificate of recognition during a Monday ceremony at Fire Station 1.

Edwards used three fire extinguishers to put out a car engine fire that started when two vehicles crashed on Feb. 6 near the Shops at Hardee Village in the 4300 block of East 10th Street.

“There are people who help every day, but if he hadn’t done something, and the things that he did, he saved her life,” Griffin said.

When the two vehicles collided head on, a SUV landed on the other vehicle. Bystanders freed the driver and a baby from the pinned vehicle but a passenger remained trapped.

Edwards, his girlfriend and their 1-year-old son drove up to the scene just as the baby was being pulled out.

“Being a parent, I understand that baby had a parent and I wanted to help,” he said.

As he approached the vehicle he saw a small fire start under the car and realized a woman was still trapped inside. His first thought was to ask if anyone had a fire extinguisher in their vehicle. He then saw a nearby furniture store.

“I know that any establishment is going to have a fire extinguisher in case of anything going wrong, whether it’s a food store or furniture store,” he said.

“I ran inside a furniture store, darted through the store and pulled a fire extinguisher from the wall, ran back out to the fire, which had grown of course, and started spraying the fire extinguisher,” Edwards said.

No one in the store tried to stop him because he was shouting “accident, accident” the entire time.

The first fire extinguisher quickly ran out so he ran back inside for another and kept spraying the fire as others tried removing the SUV so they could reach the woman.

Edwards was on his third fire extinguisher when Greenville Fire-Rescue arrived.

The woman was eventually removed from the car and taken to Vidant Medical Center for treatment.

“What he did, it’s just unbelievable. To move that quick, to run into the store and get the fire extinguisher — his quick thinking and quick action is just incredible,” Griffin said.

While Edwards fought the fire, his girlfriend, Brenda Cannon, and their son, Grayson, watched from their car.

“I kept telling him to back up because I didn’t want the car to explode and for him to be right there,” Cannon said. “I mean, my first thought was, ‘We have a kid too.’”

She said she is proud of Edwards and wants Grayson to become the sort of man who runs to help.

Edwards said he always wanted to be a firefighter but didn’t think he had what it took to run towards danger.

Edwards said he encourages people to lend a hand whenever possible.

“We are all on this planet. We are all the same,” he said. “It doesn’t really matter what race, religion or color, we are people. Regardless of what happens, regardless of who’s where and who’s done what, people should just help people.”

Monday was no walk in the park at the Greenville Town Common, as flooding from the Tar River put its walkway underwater.

Visitors to the Greenville Town Common on Monday were forced to keep to the grass as the park's walkway was underwater due to flooding from the Tar River.

The Tar River crested at 18.94 feet on Monday, flooding portions of the Town Common, the South Tar River Greenway and areas along River Drive.

Monday’s rainfall is not expected to cause additional flooding in the Greenville area, the National Weather Service at Newport/Morehead City reported.

The gauge at the Greenville Town Common showed the Tar River crested at 18.94 feet on Monday, slightly less than the 19 feet which the U.S. Geological Survey says marks major flood stage along that part of the Tar River.

Even so, the Town Common bulkhead and its walkway were inundated over the weekend.

Portions of the South Tar River Greenway and areas along River Drive also flooded. Water encircled a house at the intersection of River Drive and North Warren Drive and the grounds of Dockside Apartments.

The National Weather Service forecast a quarter-inch to a half-inch of rainfall on Monday.

The river level is expected to begin decreasing this afternoon and temperatures are expected to be in the 60s through Thursday. If the level continues to fall as forecast, it should reach 15 feet — still in the minor flood stage level — by Saturday.

Local
Juniors to return to campus today for ACT testing; many high school students to spend the day at home

Up to three-fourths of the county’s public high school students have been asked to stay home today to make room for testing on campus.

High school freshmen, sophomores and seniors throughout Pitt County Schools will have a remote learning day while an estimated 1,600 juniors are expected to report to one of eight high school campuses to take the ACT. The standardized test, which is used for college admissions, is being administered in counties across North Carolina today.

“It’s not just something that juniors can use (for college admissions); it’s also an accountability measurement for Pitt County Schools,” she said. “Our schools have to give them and our students have to have 95 percent participation.”

The ACT was administered on high school campuses across the district in February 2020 prior to shutdowns related to the coronavirus pandemic. Last March, the federal government waived requirements for standardized tests for students in kindergarten through 12th grade due to COVID-19. But Johnson said the previous testing waiver expired in July.

Today is not the first time this school year that full-time virtual students as well as in-person learners have been asked to come to campus for testing. End-of-course and Career and Technical Education tests were administered in December, prompting some parents of full-time virtual students to complain to the Board of Education that there should have been alternatives to on-campus testing.

“We just want families to know that we understand that there will be some virtual students who have never been on campus (this school year) or it may have been a while since they’re been on campus, but that we are adhering to all of the DHHS (Department of Health and Human Services) protocol for safety,” Johnson said.

“That’s why we are limiting the number of students in a room,” she said. “It was necessary for us to have our ninth-graders, our 10th-graders and our 12th-graders have a virtual learning day so that our juniors could take the test safely.”

Precautions that schools are using to help prevent the spread of COVID-19 include requiring face coverings, maintaining 6 feet of distance between people and performing symptom and temperature screenings for anyone entering the building.

Johnson said schools have trained additional teachers to administer the ACT in order to ensure that students can be appropriately distanced during testing, which is not expected to take the full school day. Transportation and breakfast will be available for students, including full-time virtual learners.

The ACT and the ACT WorkKeys became part of the state’s school accountability program in the 2012-13 school year. North Carolina is among about a dozen states that require every junior to take the exam, which is multiple choice and includes subject tests on English, math, reading, science and writing.

Students participating in the statewide ACT administration are not required to pay the $70 testing fee and can have results shared with as many as four colleges at no cost to them.

“We want our students to have that ACT score free of charge for college admissions,” Johnson said. “This is a great opportunity for students to do their best in a safe environment in order to potentially have those ACT scores for applying to college next year.”

High school juniors who are unable to report to campus for testing today may contact their school for information about an assigned makeup day. 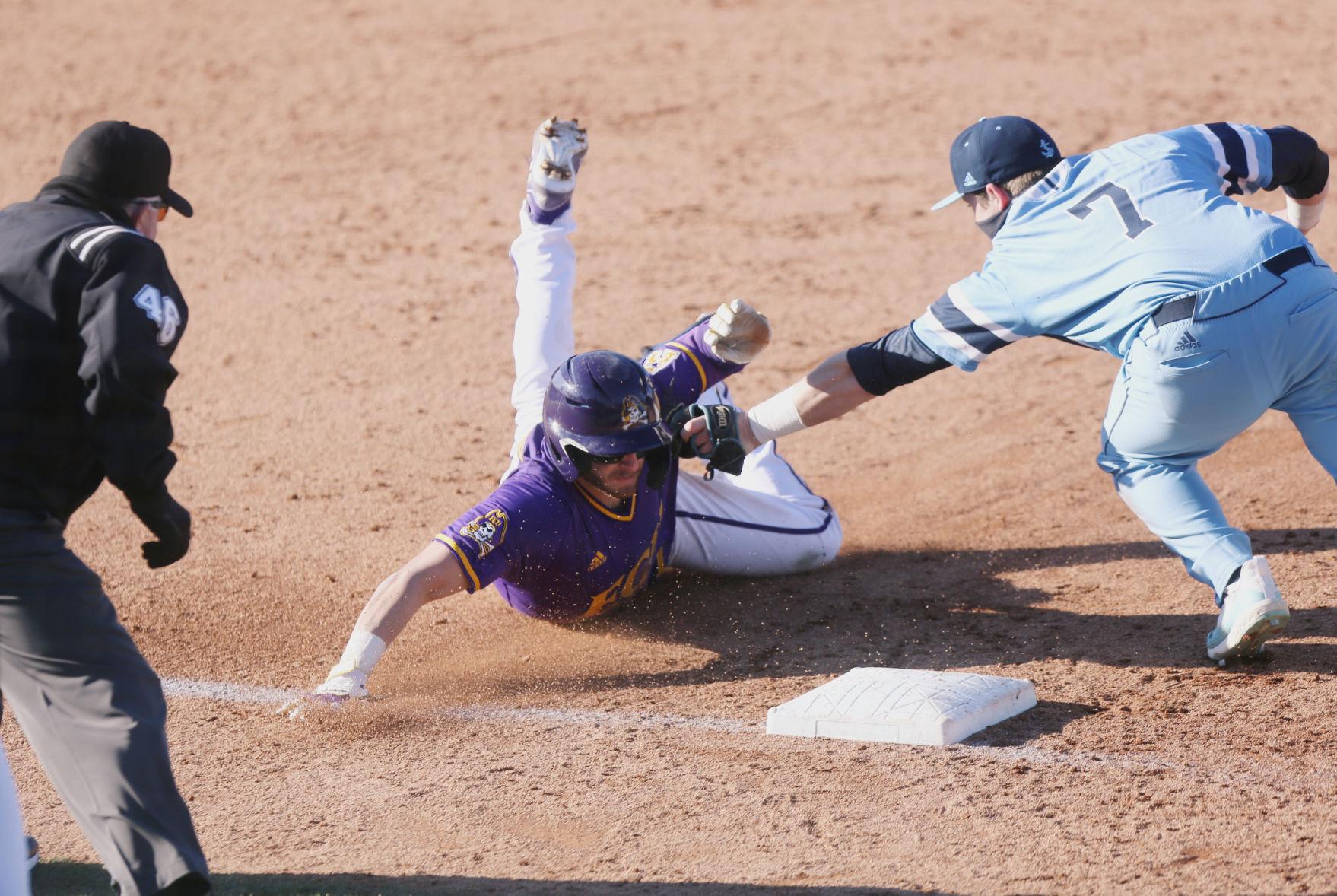 Deputies have charged a 19-year-old Greenville man in the Jan. 13 shooting death of a young mother in the Bells Fork area, the Pitt County Sheriff’s Office reported Monday.

Tyquavious Charod Cummings was initially arrested after a high-speed chase involving deputies on Jan. 19. On Monday he was charged with killing Marshayla Pasley, 20, and shooting her young son.

The incident occurred about 9:25 p.m. at 2004 Long Drive, located off of Charles Boulevard in the area of Old Fire Tower Road. Someone fired multiple shots into Pasley’s home, hitting her and her 3-year-old son.

Emergency medical personnel attempted to save her, but she was unresponsive and pronounced dead at the scene. Her son was transported to Vidant Medical Center where he was treated for his wounds.

Another resident, Raeshon Peoples, 22, also was in the residence at the time of the shooting but was uninjured.

The chase began when deputies located a vehicle of interest in the killing and attempted to stop it in a residential area across North Memorial Drive from Thermo Fisher Scientific north of Greenville.

The vehicle accelerated away, leading deputies onto N.C. 33 West. A deputy was able to stop the vehicle at the on-ramp to U.S. 264 using the PIT maneuver, the office reported.

Cummings ran but was quickly brought into custody. Stolen firearms were found in the vehicle, the agency reported.

The sheriff’s office says the investigation is still in progress and further charges are expected.

Cummings was initially being held on charges of speeding 100 in a 45 mph school zone; felony flee to elude arrest; reckless driving to endanger; resist, delay and obstruct; two counts of possession of a stolen firearm; two counts carrying a concealed gun; and larceny of a firearm.