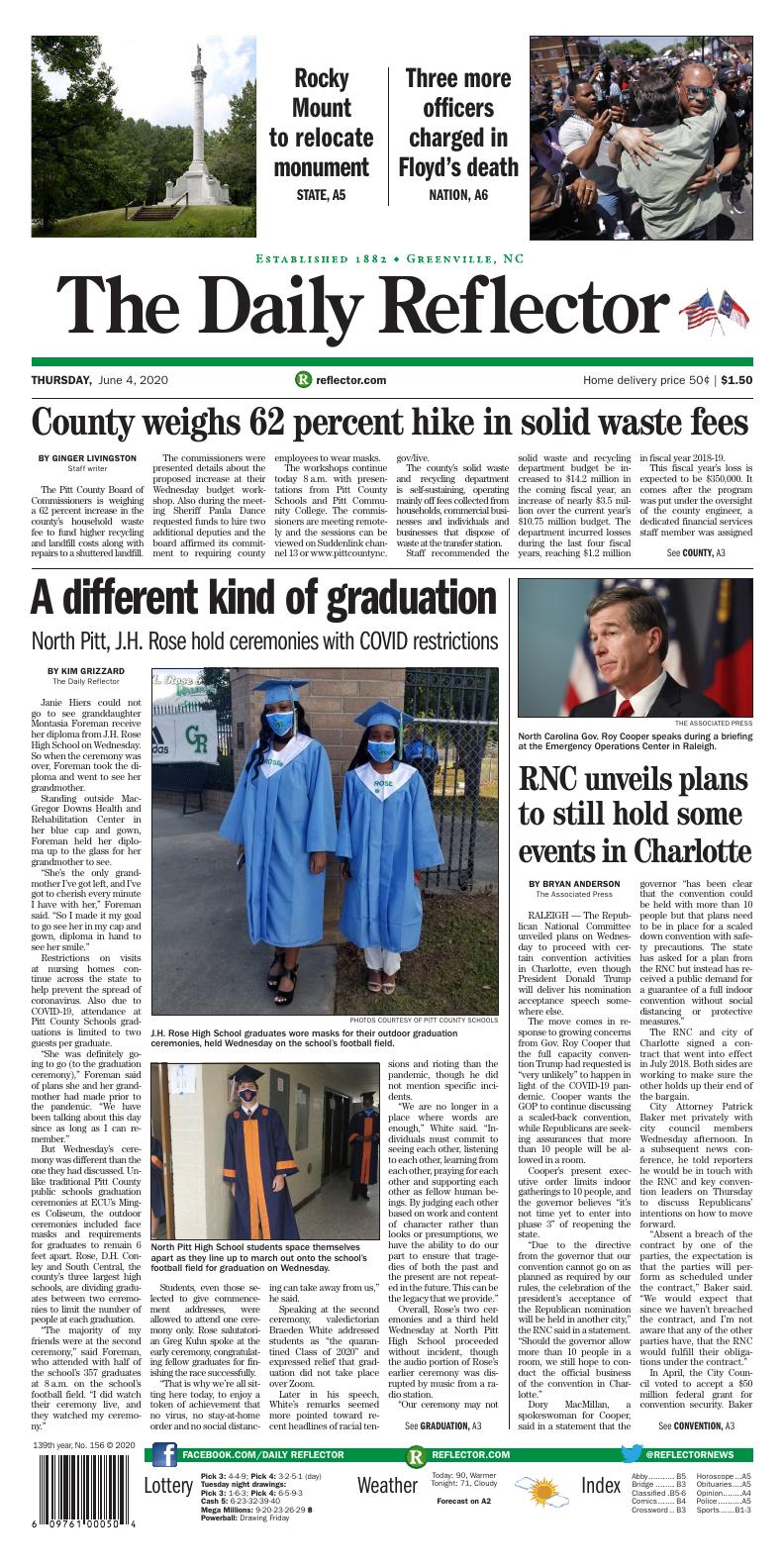 The Pitt County Board of Commissioners is weighing a 62 percent increase in the county’s household waste fee to fund higher recycling and landfill costs along with repairs to a shuttered landfill.

The commissioners were presented details about the proposed increase at their Wednesday budget workshop. Also during the meeting Sheriff Paula Dance requested funds to hire two additional deputies and the board affirmed its commitment to requiring county employees to wear masks.

The workshops continue today 8 a.m. with presentations from Pitt County Schools and Pitt Community College. The commissioners are meeting remotely and the sessions can be viewed on Suddenlink channel 13 or www.pittcountync.gov/live.

The county’s solid waste and recycling department is self-sustaining, operating mainly off fees collected from households, commercial businesses and individuals and businesses that dispose of waste at the transfer station.

Staff recommended the solid waste and recycling department budget be increased to $14.2 million in the coming fiscal year, an increase of nearly $3.5 million over the current year’s $10.75 million budget. The department incurred losses during the last four fiscal years, reaching $1.2 million in fiscal year 2018-19.

This fiscal year’s loss is expected to be $350,000. It comes after the program was put under the oversight of the county engineer, a dedicated financial services staff member was assigned to the department and other operational changes occurred.

Staff proposes raising the household waste fee from $74 annually to $120 to stop the losses and cover expected spending increases, purchases and repairs. While staff presented the increase as raising the fee from $6.17 a month to $10 a month, the fee is included annually on county property tax bills and collected when that bill is paid. It is not billed monthly.

The household waste fee allows for unlimited disposal of residential trash, including furniture, junk, clothes and anything that isn’t construction or demolition debris. It also covers yard waste, electronics and television disposal and free use of convenient sites.

Staff also proposes raising fees for disposing of construction and demolition, concrete and block, pallets and shingles from between $1 to $2 per ton.

The cap on the county’s closed landfill needs repairs expected to cost $1.2 million.

The replacement of equipment, trucks and containers is expected to cost $935,000 and repairs and maintenance to the transfer station off Allen Road will be an estimated $782,000.

The fee paid to Eastern Carolina Vocational Center for recycle processing is expected to increase by $390,000.

ECVC’s costs are increasing because there are fewer markets accepting recyclables. Many potential recyclables are being discarded because of contamination.

County Engineer Tim Corley said he and John Demary, solid waste and recycling director, are talking with municipal representatives about launching an educational program to decrease contamination. There also has been discussions about limiting items accepted for recycling to limit contamination.

The county’s fee to dispose of trash at a regional landfill in Bertie County also is increasing another $380,000, Elliott said.

Demary said there are few companies accepting tires for disposal. The company the county works with is raising its price by $150,000 annually. Demary said the state, through the fee it collects for tire disposals, typically covers the county’s disposal costs but he worries it won’t cover the $150,000 increase.

The landfill also expects to lose revenue. Barnhill Contracting was purchasing shingles to recycle the petroleum find in them. With worldwide petroleum prices decreasing, recycling isn’t as cost efficient so it won’t purchase as many shingles from the county.

Sheriff Paula Dance said she kept her requests to a minimum because she recognized the financial constraints brought on by the COVID-19 pandemic.

However, she asked for funding for two new deputy positions for the Pitt County Courthouse. Elliott did not include funding for the positions in his recommended budget.

The state Administrative Office of the Courts has added a fifth district court judge to the Pitt County bench and two deputies are needed to provide security, Dance said, and she doesn’t have enough staff to put anyone in the courtroom.

Adding the two positions will cost about $153,600 in salary, benefits, equipment, uniforms and other hiring costs, according to Pitt County Sheriff’s Office spokesman Sgt. Lee Darnell.

Tuesday’s meeting ended with an unsuccessful attempt by Republican commissioners to revoke a requirement that county employees wear masks indoors when interacting with people. The requirement was approved with a 6-3 vote during Monday’s Board of Commissioners meeting.

Commissioners Mike Fitzpatrick and Lauren White said multiple county employees have complained about the mandate. They said they had reached out to Greenville officials and were told the city wouldn’t implement a masking requirement.

The requirement supporters wanted Elliott to talk with municipal leaders about having them adopt a similar requirement that all citizens wear masks when in public buildings and locations social distancing couldn’t be used.

White said she talked to officials in several other municipalities and that too are against masking requirements. Fitzpatrick and White didn’t identify who they spoke with.

“I think the employees see this as a punishment at this point,” Fitzpatrick said. “I certainly want everyone to be as safe as possible but making one small group wear a mask isn’t effective.”

Elliott was asked how many employees had approached him with complaints about the policy and he said only one directly spoke to him.

“I think there have been a good deal of rumblings of discontent,” Gallagher said.

A vote on Fitzpatrick’s motion was blocked when a substitute motion to keep the policy in place was made. It passed 6-3 with Fitzpatrick, Coulson and White voting against it.

North Pitt High School students space themselves apart as they line up to march out onto the school’s football field for graduation on Wednesday.

Janie Hiers could not go to see granddaughter Montasia Foreman receive her diploma from J.H. Rose High School on Wednesday. So when the ceremony was over, Foreman took the diploma and went to see her grandmother.

Standing outside MacGregor Downs Health and Rehabilitation Center in her blue cap and gown, Foreman held her diploma up to the glass for her grandmother to see.

“She’s the only grandmother I’ve got left, and I’ve got to cherish every minute I have with her,” Foreman said. “So I made it my goal to go see her in my cap and gown, diploma in hand to see her smile.”

Restrictions on visits at nursing homes continue across the state to help prevent the spread of coronavirus. Also due to COVID-19, attendance at Pitt County Schools graduations is limited to two guests per graduate.

“She was definitely going to go (to the graduation ceremony),” Foreman said of plans she and her grandmother had made prior to the pandemic. “We have been talking about this day since as long as I can remember.”

But Wednesday’s ceremony was different than the one they had discussed. Unlike traditional Pitt County public schools graduation ceremonies at ECU’s Minges Coliseum, the outdoor ceremonies included face masks and requirements for graduates to remain 6 feet apart. Rose, D.H. Conley and South Central, the county’s three largest high schools, are dividing graduates between two ceremonies to limit the number of people at each graduation.

“The majority of my friends were at the second ceremony,” said Foreman, who attended with half of the school’s 357 graduates at 8 a.m. on the school’s football field. “I did watch their ceremony live, and they watched my ceremony.”

Students, even those selected to give commencement addresses, were allowed to attend one ceremony only. Rose salutatorian Greg Kuhn spoke at the early ceremony, congratulating fellow graduates for finishing the race successfully.

“That is why we’re all sitting here today, to enjoy a token of achievement that no virus, no stay-at-home order and no social distancing can take away from us,” he said.

Speaking at the second ceremony, valedictorian Braeden White addressed students as “the quarantined Class of 2020” and expressed relief that graduation did not take place over Zoom.

Later in his speech, White’s remarks seemed more pointed toward recent headlines of racial tensions and rioting than the pandemic, though he did not mention specific incidents.

“We are no longer in a place where words are enough,” White said. “Individuals must commit to seeing each other, listening to each other, learning from each other, praying for each other and supporting each other as fellow human beings. By judging each other based on work and content of character rather than looks or presumptions, we have the ability to do our part to ensure that tragedies of both the past and the present are not repeated in the future. This can be the legacy that we provide.”

Overall, Rose’s two ceremonies and a third held Wednesday at North Pitt High School proceeded without incident, though the audio portion of Rose’s earlier ceremony was disrupted by music from a radio station.

“Our ceremony may not be perfect,” the school system posted on social media in response to complaints about sound. “But it is a beautiful tribute to the accomplishments of our students.”

North Pitt High School valedictorian Jacob James told fellow graduates that a ceremony on the school’s football field was not what any of them had envisioned.

“We pictured ourselves receiving a diploma from Dr. (Lionel) Kato (former North Pitt principal) in Minges Coliseum, glancing in the audience to see a group of 12 of the people that meant the most to us,” James said, referring to the 12 guests that could have come to the Minges ceremony.

“If the past has taught us anything about the future, it is that it is uncertain,” he said. “However, in this far from clear future that we will journey into after leaving here today, we can all find comfort in knowing that it will all turn out right.”

North Pitt Principal Maurice Harris said the students’ experience of having been unable to return to the classroom to complete the last two months of the spring semester “has served as a lesson in determination, patience and grace.”

Assistant Principal Willie Joyner, who became the first person in the county to test positive for COVID-19 in March, called out the names of each of North Pitt’s 196 graduates.

As of Wednesday, 317 cases of the virus had been reported in the county, which has recorded 208 recoveries and two deaths.

Foreman was glad to see that graduation was not a casualty of the virus. After hearing about cancellations of graduations at schools in other areas, she had worried that her ceremony might not take place, at least not in person.

“I was waiting for that email that we would get that said graduation was canceled, but I’m so glad that email never came,” she said. “It was very special. It just felt great to be able to walk across the stage in front of my parents and grab my diploma.”

She believes that in years to come the story of her graduation ceremony and trip to show her diploma to her grandmother will be things she tells her grandchildren.

“I will tell them to cherish what you have,” she said. “I would tell them to go out and try new things and enjoy the little things while you can.” 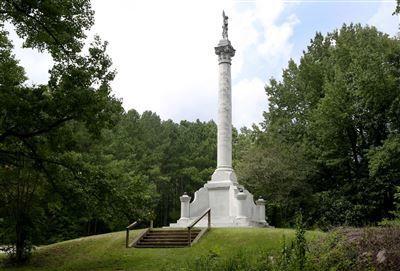 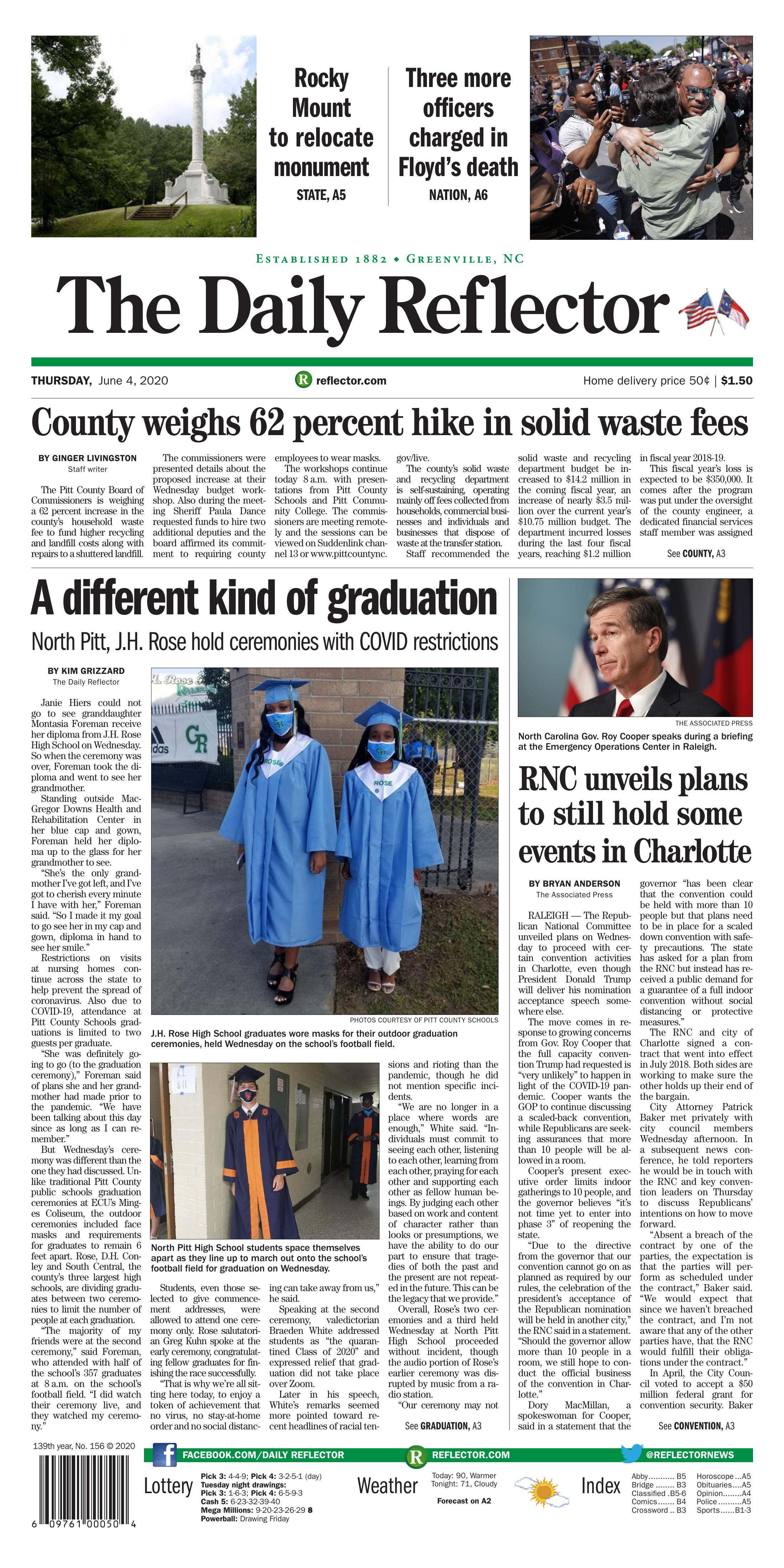