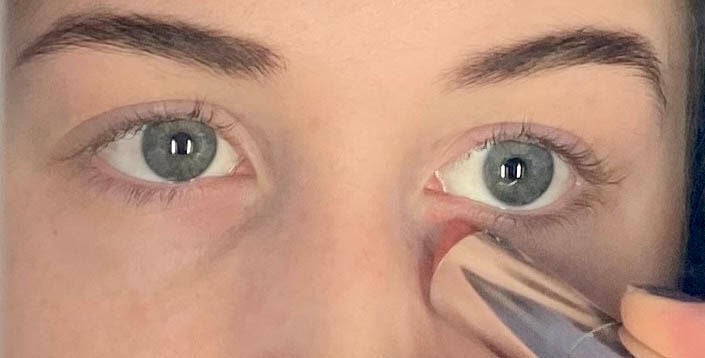 Some young people are starting a makeup trend to make themselves look older and more weary.

As a young man, I recall knowing a few middle-aged men who carried around heavy bags every day — and not the luggage variety.

They had those worrisome bags under their eyes, and I vowed that if that ever happened to me I would have something done about it.

That’s just one of many youthful promises to myself that have been shattered by the cruel weight of reality.

There are permanent bags under my eyes, and I have come to accept them. Some days are worse than others, but they never disappear. The trait comes from my mother, who says that too much salt in the diet will swell eye bags.

Now comes a story in the New York Times about how the youth of today — or at least a trendy few — are painting dark circles under their eyes. And apparently they are leaving the house that way.

“The entire goal is to normalize dark circles,” a 19-year-old model featured in the story said. She is among several who have popularized the look through videos posted on social media. “We’re Gen. Z,” the model said. “We’re all tired and have bad sleeping schedules.”

Oh, please. I have a couple of Gen. Z’ers living in my house. Maybe they don’t always go to bed at a decent hour, but they are not losing any sleep. Like the young model, any dark circles under my daughters’ eyes would have to be painted on.

I’d say that my daughters never would do such a thing, but one of them walked in with purple hair recently.

I can take unnatural hair colors. I can even accept the strangely enduring trend of expensive jeans that look like they were dried on a barbed wire fence in a powerful wind.

But some day these young ladies are actually going to be tired on a regular basis, and a bad sleeping schedule will account for only a small percentage of the reasons. When the makeup remover can no longer scrub away the dark circles, it’s doubtful they will view that as a positive development.

After I decided to use the story about faking dark circles for this column, I had to go back to the internet and locate the headline again. The search initially turned up another New York Times story, from three years ago, headlined: “The Fix for Dark Circles, Bags and Droopy Lids.”

That’s more like it. This story contains no teenagers pining for the haggard look of hardship and trouble. It amounts to a sales pitch to older people who have made youthful promises to themselves and desperately want to keep them.

“Deflate Bags and Puffiness,” is a subhead under which I thought I might find something useful. But then it drifted toward a surgical procedure called “blepharoplasty.”

No, thanks. That sounds like something that can happen when old people stand up too quickly.

I might have to carry around heavy bags for the rest of my life. But I will never blepharoplasty in mixed company. That’s a promise.