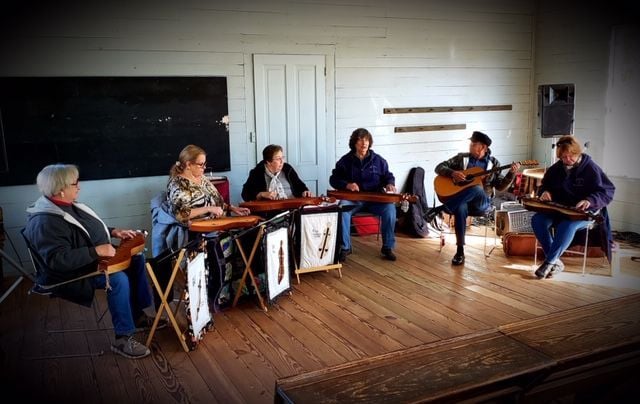 Waterbound dulcimer group is based in Kinston but includes members from the surrounding area. 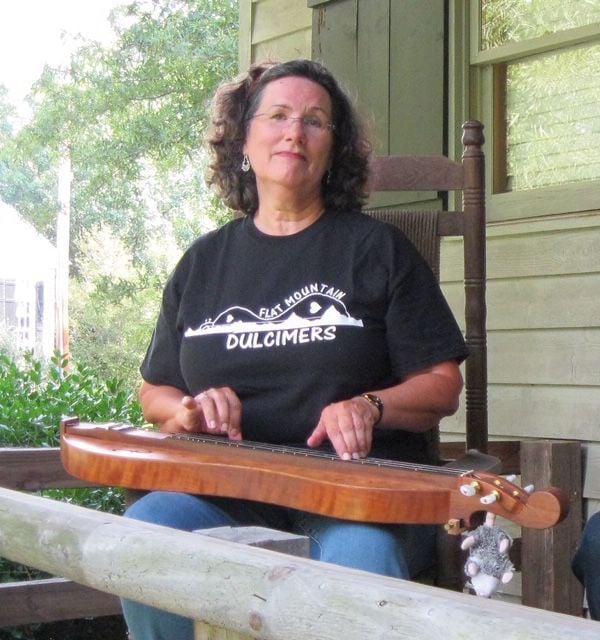 Nancy Galambush says something is missing from her life when she’s not making music. 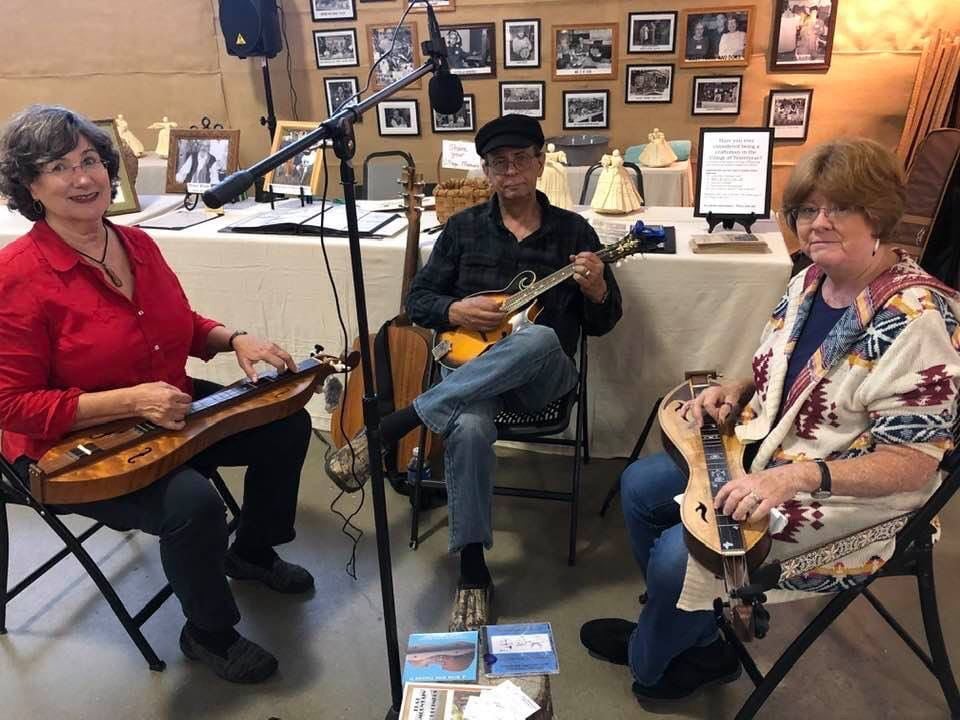 Flat Mountain Dulcimers — Nancy Galambush, Dave Roberson and Margit Roberson, from left — play at the Village of Yesteryear at the 2019 NC State Fair. 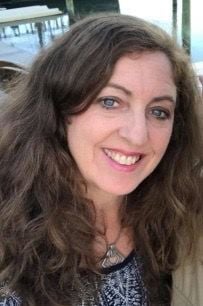 Waterbound dulcimer group is based in Kinston but includes members from the surrounding area.

Nancy Galambush says something is missing from her life when she’s not making music.

Flat Mountain Dulcimers — Nancy Galambush, Dave Roberson and Margit Roberson, from left — play at the Village of Yesteryear at the 2019 NC State Fair.

It’s a tale from Nebuchadnezzar to nightmares. Who knew dulcimer diaries could be so intriguing, from notorious Biblical references to waking up with a palpitating heart?

In eastern North Carolina, if you’ve even dabbled with a dulcimer, you’ve probably been a part of Nancy Galambush’s story, in or influenced by one of her groups. She plays in a trio, Flat Mountain Dulcimers, a group that brought home a first-place award at the NC State Fair Folk Festival in 2019. She also leads a group based in Kinston called Waterbound, and provides instruction for one in Greenville, 4th Street Dulcimers. But her ties to Greenville go even deeper than the dulcimer: she also is a cellist with the Pitt Community College Symphony Orchestra — because there’s always room for cello, even on a dulcimer diet.

While Galambush took a class on the hammered dulcimer in Greenville with Mike Hamer years ago, she usually plays a mountain dulcimer. “A type of zither, it is also referred to as an Appalachian dulcimer, lap dulcimer, strummed dulcimer, dulcimore and a hogfiddle,” she said. “‘Dolce’ means ‘sweet’ and people generally interpret the word ‘dulcimer’ to mean ‘sweet music.’” The dulcimer also gets a mention in the Bible, in the King James version of Daniel, though she says it was likely a very different instrument.

Now residing in the farming community of Arba outside of Snow Hill, Galambush grew up in Cleveland, Ohio, moving to eastern North Carolina in 1985 to work at Caswell Developmental Center as an audiologist/supervisor, retiring in 2012. It was there, in 2000, that Waterbound began playing together to enthusiastic audiences. They met in Kinston but came from all over eastern North Carolina. “Since eastern North Carolina had just experienced the flooding following Hurricane Floyd, we decided to call ourselves Waterbound Dulcimers,” Galambush said.

But her dive into dulcimers began much earlier. “When I was a kid, my family went camping in the Smoky Mountains. That is where I first saw and heard a dulcimer,” Galambush remembers. In 1998 her late husband JC Bradshaw decided he wanted to build one. “He asked me if I would learn to play, and that is how I got started.”

There were no teachers in this area at that time, so she started out learning with a book. “A friend encouraged me to go to Appalachian State University for their week-long dulcimer workshop,” she explained. “Once I got there, I was amazed at the variety of sounds the professionals could get from an instrument which I had thought was a pretty simple instrument, and the types of music they could play in addition to old-time fiddle tunes and ballads.” She left inspired to go home and practice.

“My one friend who played, the late Ron Cyr, and I got together once a week to support each other in learning to play,” Galambush said. “Soon JC joined us as did Dave and Margit Roberson from Goldsboro.” And that was the beginning of the Waterbound club. “Since there were no local teachers, we invited Joe Collins, an instructor from Shelby, NC to do a workshop. This turned into an annual workshop which Waterbound sponsored for about 20 years, until the pandemic.”

While playing with Flat Mountain Dulcimers, Galambush got the idea that a cello might sound good with dulcimer and guitar, so she pulled hers out of the closet. She had played cello in community orchestras until moving to eastern North Carolina. “After I stopped playing, I had nightmares about showing up for an orchestra concert but having not practiced, or not having my music, or finding myself in the trombone section rather than in the cello section.”

Once she got her cello out, she stopped having those dreams. “Obviously, something was missing in my life during the years I didn’t make music,” she explains. “Just about that time, Pitt Community College began its community symphony and I have been a member ever since.”

And then a pandemic struck. “When I stopped playing my dulcimer due to the pandemic, I was having similar dreams about being at a dulcimer workshop where I was about to go on stage for a concert but was unprepared,” Galambush said. “Since I started Zoom sessions with other dulcimer players, those nightmares have stopped.”

Galambush has taught a few classes for the Lifelong Learning Program through ECU. The first was on the history of the dulcimer. “I didn’t know if people would be interested in this, but I was aware that a lot of people have dulcimers hanging on their walls or under their beds, mementos of their trip to the Appalachian Mountains,” she said. “It turns out there was a lot of interest in the dulcimer in Greenville.”

She began teaching beginner class, using loaner cardboard instruments for those who didn’t have their own instrument. Shortly after that, Margaret Wirth, Vivian Mott and Margaret Brooks began a dulcimer group at St. Paul’s Episcopal Church and she volunteered to teach. The group known as 4th Street Dulcimers now has about eight members, some from Washington and Bath in addition to Greenville. They are meeting via Zoom during the pandemic.

Galambush said she enjoys old-time music like fiddle tunes, ballads, and Irish jigs. One of her favorite songs to play these days is “Rosin the Beau.” “It’s a lovely waltz, a fiddle tune, but if you know the lyrics, you realize that it’s a drinking song,” she said. In contrast, Flat Mountain Dulcimers had just worked up “Nights in White Satin” before the pandemic hit.

Flat Mountain Dulcimers has performed many times at R. A. Fountain General store and at regional events such as Oriental’s Ol’ Front Porch Festival. Galambush has recorded music with Joe Collins (2007 National Dulcimer Champion) and with Flat Mountain Dulcimers. Visit her website, nancygalambush.com for information about workshops, CDs, and performances.