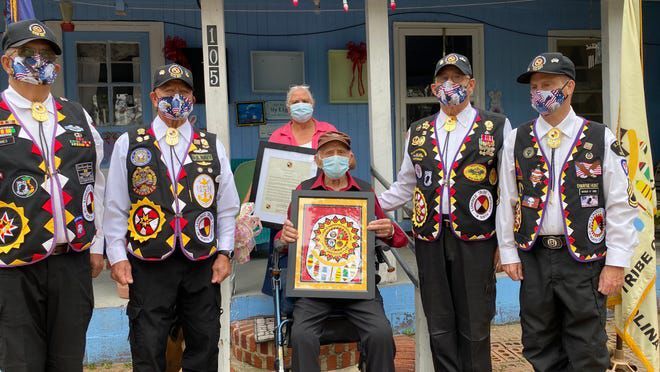 Evert Frank Locklear was recognized by the Lumbee Tribe of North Carolina for his service during World War I on his 102nd birthday. As one the tribe’s oldest living veterans, leaders presented him with a warrior’s patch insignia. 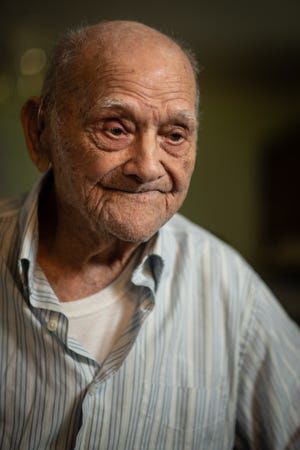 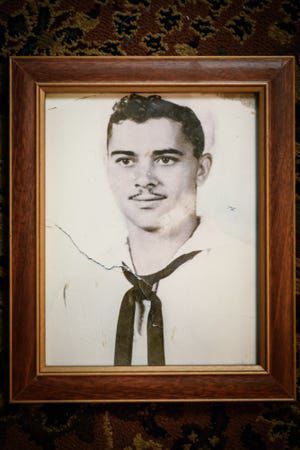 Evert Frank Locklear when he joined the U.S. Navy during World War I. 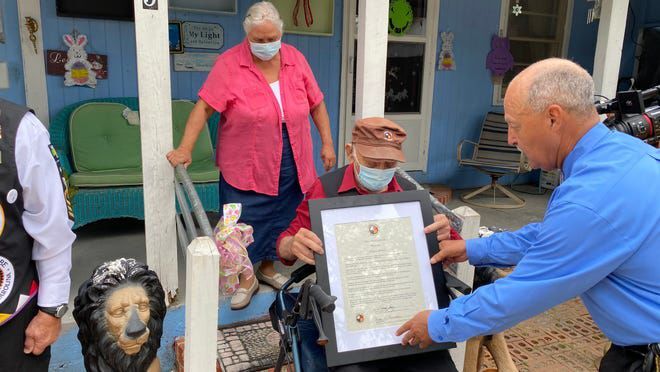 Evert Frank Locklear was recognized by the Lumbee Tribe of North Carolina for his service during World War I on his 102nd birthday. As one the tribe's oldest living veterans, leaders presented him with a warrior’s patch insignia.

Evert Frank Locklear was recognized by the Lumbee Tribe of North Carolina for his service during World War I on his 102nd birthday. As one the tribe’s oldest living veterans, leaders presented him with a warrior’s patch insignia.

Evert Frank Locklear when he joined the U.S. Navy during World War I.

Evert Frank Locklear was recognized by the Lumbee Tribe of North Carolina for his service during World War I on his 102nd birthday. As one the tribe's oldest living veterans, leaders presented him with a warrior’s patch insignia.

MAXTON — One of the Lumbee tribe’s oldest living veterans didn’t think he’d ever join the military when World War II broke out.

But on March 26, his 102nd birthday, Evert Frank Locklear was recognized by the Lumbee Tribe of North Carolina for his service.

Tribe leaders presented Lockler with a warrior’s patch insignia, which symbolizes all the Lumbee warriors who have fought in conflicts since World War I.

Locklear was born just a year after World War I began in 1919, said Gary Deese, a retired command sergeant major who represents the Lumbee Warriors Association.

“(He) was born into a family of farmers coming of age during the Great Depression, and worked hard on the family farm before being drafted in the U.S. Navy,” Deese said.

From his home in Maxton on Monday, Locklear reflected on what led him to the Navy and his life after the service.

Locklear was born to Nora and Otie Locklear and was raised near the Prospect community.

By the time he was 21, he had his own family and was working as a truck driver near Jacksonville.

“I never thought I’d have to go in the service with all them children I had,” Locklear said. “It never crossed my mind.”

He was drafted into the Navy after the Dec. 7, 1941, bombing of Pearl Harbor.

He remembered being sent to Spartanburg, South Carolina, on Christmas Eve and boarding a train headed to a naval base in Green Bay, Wisconsin, for training. That was followed by more training at naval bases at Camp Hair near Williamsburg, Virginia, and Shoemaker, California.

Locklear said he was put on the USS Kay Perchwell and sent to Pearl Harbor.

“Lord have mercy, you wouldn’t believe that place was torn to pieces,” he said. “All of them palm trees — it was just destroyed.”

From Pearl Harbor, he said, he was put on a ship to go to the Philippines.

He said the ship docked at night, and he camped out in the woods in the rain.

In the woods, he said, he and one other man from Texas used bulldozers to clear the area, which was similar to a demilitarized zone. They built a shower and another building.

Locklear said he belonged with an automotive repair unit. Most of his work, he said, was behind the frontlines.

During the summer of 1943, he remembered, a school teacher educated him and three other seamen. Growing up, he really didn’t have a formal education.

“That didn’t last long before the war ceased.”

Locklear said once back in Williamsburg, Virginia, he discharged from the military and in August 1945 returned to his wife and children.

Life after the military

Locklear returned to farming, until finding a job at a body shop in Red Springs in 1947.

He said he worked for $22.50 a week to support his then-seven children.

Locklear remembered paying the $65 down payment for his new home there after meeting the builders at a John Deere shop in Raeford.

“The guy said, ‘I’d like to build you a house,’” Locklear recalled. “I said, ‘I got no money to build a house with all them young’uns and a wife.’”

After being laid off in Red Springs, he next took an auto repair job at a Chevrolet place in Laurinburg. There, he said, he made $180 in two days.

“I came home and I just went back to the back room and I said to my wife, ‘Lookie here at the money I got.’”

Locklear was married to his first wife, Lessie Bryant Locklear, until her death in July 1992.

A MAN OF FAITH

Locklear said he’s worked several jobs throughout his life, but the one he found most fulfilling was being a pastor. He preached for about eight years.

“The Lord walked with me all the time, and I was a hard-down sinner,” he said. “I did a lot of things I could never tell.”

He said was first saved in the mid-1960s during a revival in Laringburg.

But, he said, he “listened to the wrong man,” one Sunday, and his faith became derailed for about 29 years.

He said he returned to a “life of sin,” until he was intoxicated at a church and remembered seeing a light from an evening star.

Something said, ‘Boy it’s time you better do something,’” he said.

Locklear said he returned home at 11 p.m. that night and prayed until about 4 a.m.

He said he didn’t have intentions of preaching again, until about six years ago when he became a pastor at Community Holiness Church for 15 years.

Locklear compared his life to that of David in the Bible and said he was a “backslider.”

But, he said, he considers John 3:16 as a significant Bible verse, which talks about God loving the world and sending his only son to die for the sins of humans and giving them eternal life if they believe in him.

“The love of God, it covers a multitude of sins,” Locklear said. “I don’t care how deep you get in sin, God can lift you up out of it because he’s God. Nothing takes the place of living in a Christian home and in the family of God.”

For copyright information, check with the distributor of this item, The Fayetteville Observer.