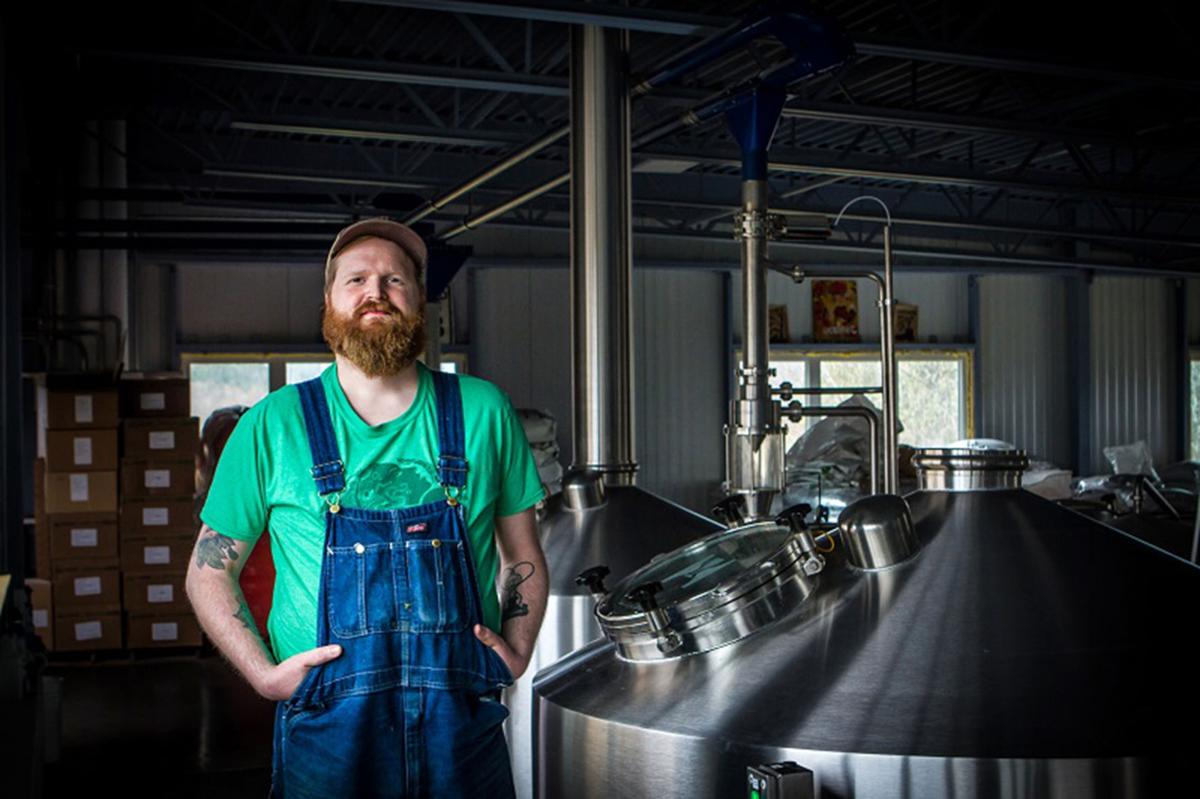 Ryan Witter-Merithew, 35, got his start in Farmville and has been a brewer for a decade. Now he and his wife, Mahalia Breen, are coming back to eastern North Carolina to launch Casita Cerveceria (Spanish for little house brewing). 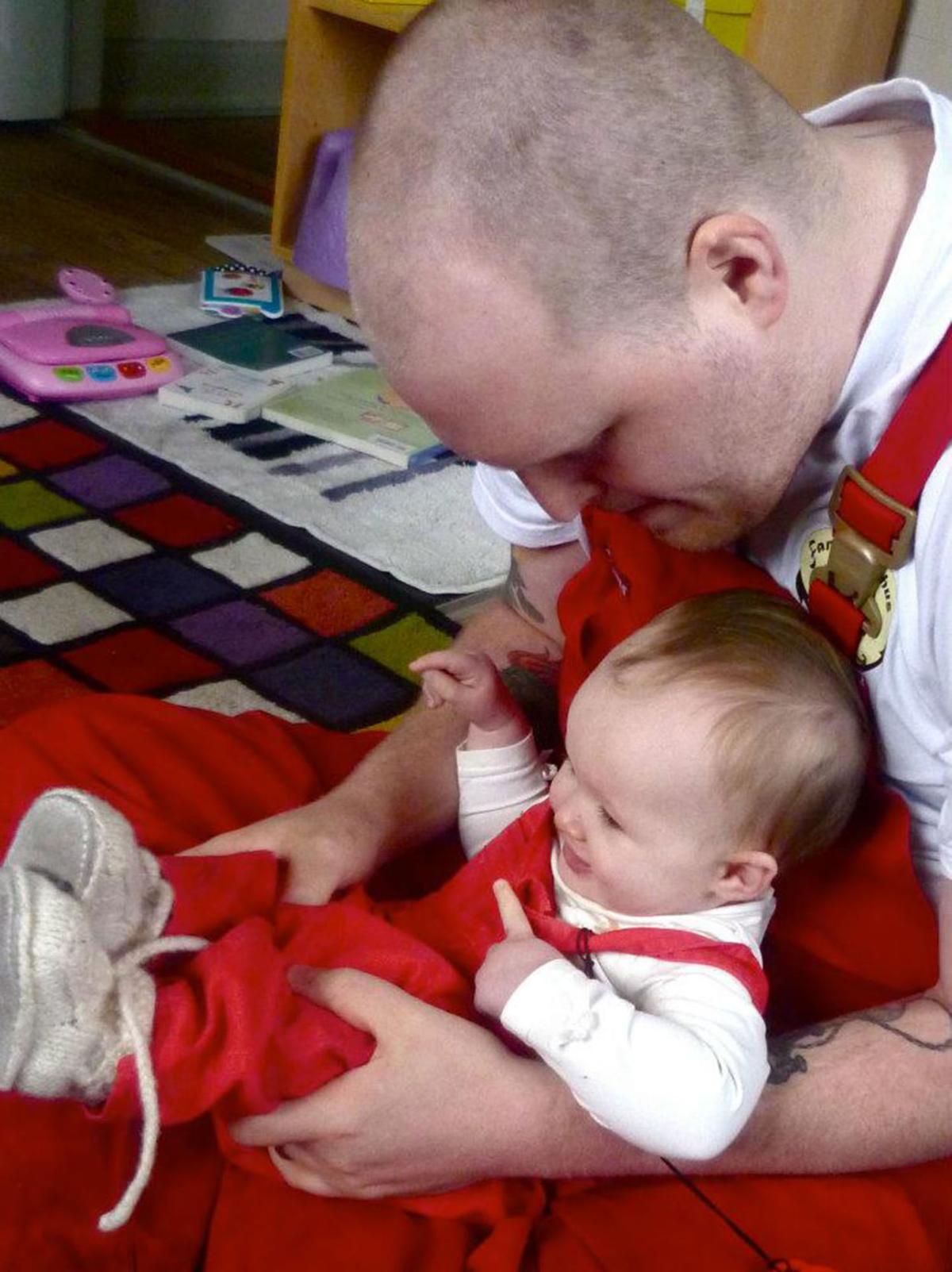 Ryan with daughter, Edison, in the family's Denmark days in 2012. He had shaved his head and facial hair to raise money for Pints for Prostates, a North Carolina-based charity. He and his wife, Mahalia, a breast cancer survivor, have raised more than $10,000 for breast cancer research through the sale of their beer. 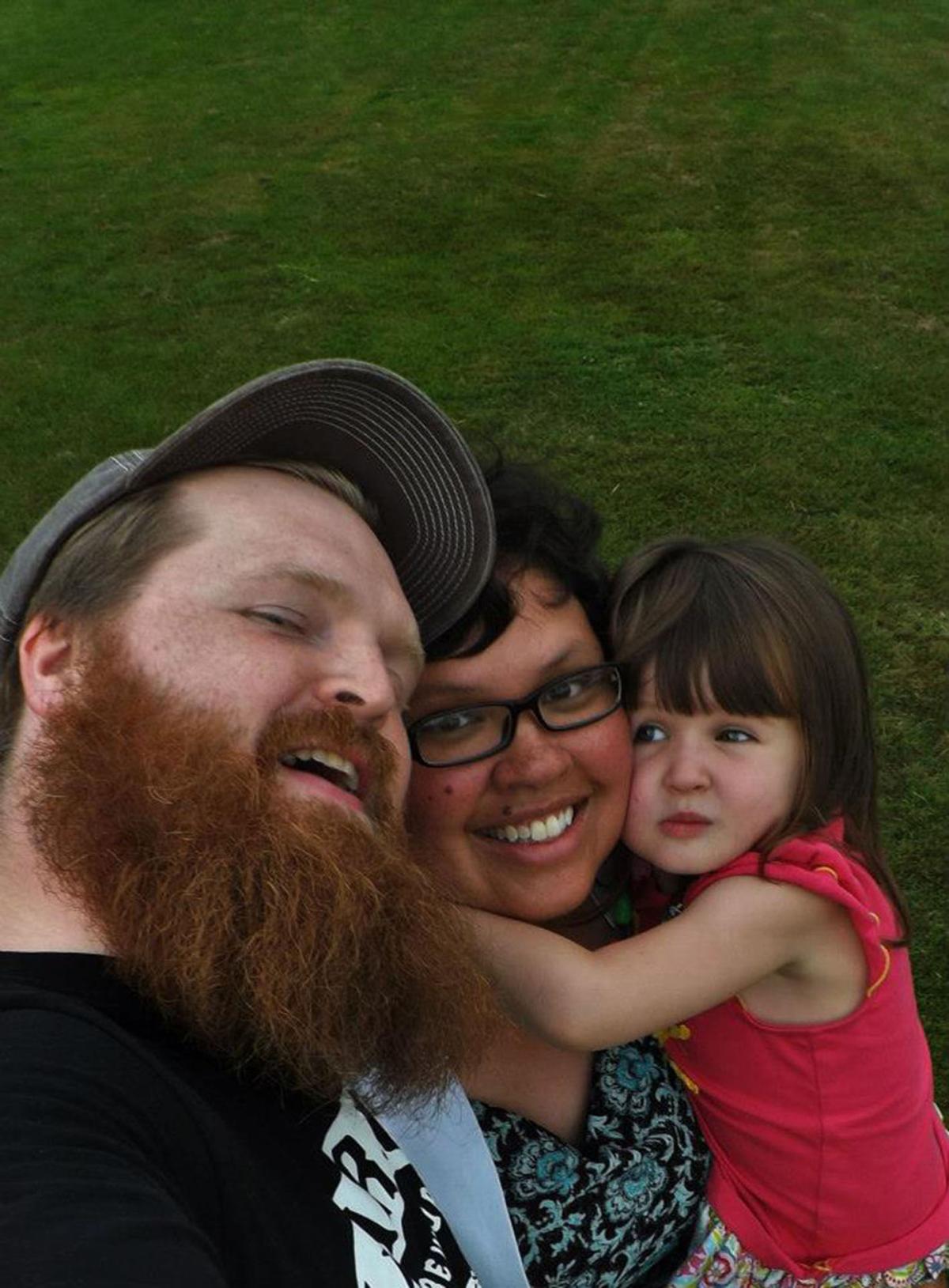 Ryan, Mahalia and their daughter, Edison, will leave Tuesday for a 26-state Full Circle Brewing Tour they have been planning since March. “I almost never have vacations anymore that aren't related to beer in some way,” Mahalia said. “That's my life now. … Pretty much as soon as I started dating Ryan, I unwittingly entered the beer industry.” 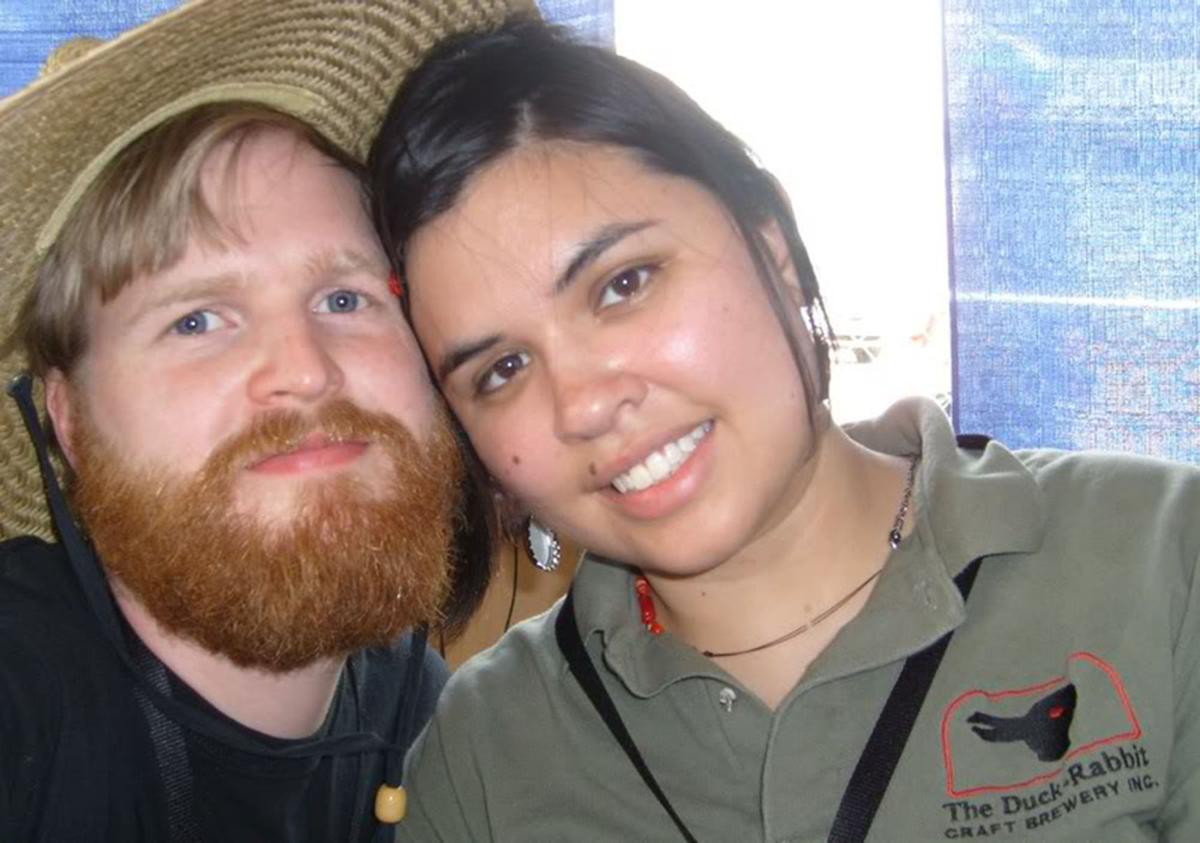 Ryan Witter-Merithew, 35, got his start in Farmville and has been a brewer for a decade. Now he and his wife, Mahalia Breen, are coming back to eastern North Carolina to launch Casita Cerveceria (Spanish for little house brewing).

Ryan with daughter, Edison, in the family's Denmark days in 2012. He had shaved his head and facial hair to raise money for Pints for Prostates, a North Carolina-based charity. He and his wife, Mahalia, a breast cancer survivor, have raised more than $10,000 for breast cancer research through the sale of their beer.

Ryan, Mahalia and their daughter, Edison, will leave Tuesday for a 26-state Full Circle Brewing Tour they have been planning since March. “I almost never have vacations anymore that aren't related to beer in some way,” Mahalia said. “That's my life now. … Pretty much as soon as I started dating Ryan, I unwittingly entered the beer industry.”

For some beer lovers, it’s enough to kick back close to home on the Fourth of July, watch some fireworks and sip on a cold one.

But Mahalia Breen and Ryan Witter-Merithew tend to have a lot more on tap.

Two years ago, the couple chose the Fourth as the first occasion for brewing Casita Cerveceria, the brand of beer they created in Vermont. This year, Independence Day will be the day they set out to explore 26 states in 28 days, a half dozen of which will be spent making beer.

Along the way, the two 35-year-olds and their 5-year-old daughter will camp out, sleep in hotels or stay with friends. They will see the Grand Canyon, Mount Rushmore and the Golden Gate Bridge. The journey will take the family some 8,000 miles while Ryan brews beer from coast to coast (and at a handful of places in between).

“It’s something that we’ve always said that we wanted to do,” said Mahalia, a Wilson native and East Carolina University graduate. “It’s one of those bucket-list items. You just really don’t have time in your life to take a monthlong vacation … so we decided to also make it a beer tour.”

They have named it the Full Circle Brewing Tour, not only because they are circling the country to brew beer but also because it will take them back to eastern North Carolina, where their lives together began a decade ago.

In 2007, Ryan had just started his job as an assistant brewer at The Duck-Rabbit Craft Brewery in Farmville. Mahalia was completing her master’s degree and was about to begin teaching at J.H. Rose High School. The two strangers struck up a conversation at Christy’s Europub one night in April. Mahalia had ordered a Blue Moon, and Ryan took it upon himself to educate the English teacher about beer by criticizing the mass-market lager she was drinking.

“He (said), ‘Oh, why are you drinking that? Any beer you have to put fruit in isn’t worth drinking,’” Mahalia said.

Ryan has a slightly different recollection of that initial conversation.

“I don’t see it as much as criticizing as just getting the opportunity to talk to her about her choices,” he said, laughing.

Was the beer talk a pick-up line? Of course.

Did it make Ryan look like a jerk? A little.

But his enthusiasm did manage to get Mahalia’s attention.

The two hit it off. Ryan, a Charlotte native, was new to the area. Mahalia, who had lived abroad after she finished her undergraduate degree, found that many of her friends had left Greenville by the time she returned for grad school. So she and Ryan started hanging out together, going to beer festivals on weekends. While Ryan honed his craft and Mahalia refined her knowledge of beer, a romance was brewing. Two years later, they were married.

Shortly after the wedding, Ryan was offered a job as a head brewer in Europe. Mahalia, who had taught English as a second language in Korea, was ready for another international adventure, so in 2009, the newlyweds packed up and headed for Denmark. There, they welcomed daughter Edison.

By October 2012, the family relocated to the United Kingdom where Ryan had a chance to launch Siren Craft Brew. By its second year of operation, Siren was named “Best Brewery in England” by Ratebeer.com.

But there were different challenges at home. A little more than a year into their stay, Mahalia was diagnosed with breast cancer.

While there was no history of breast cancer in her family, both Mahalia and Ryan knew what it was like to face cancer with people they loved. Mahalia’s father died from colon cancer. Both Ryan’s grandfathers had suffered prostate cancer.

Mahalia spent most of 2014 undergoing surgeries, chemotherapy and radiation. But after her treatment was complete, there was a lingering feeling of homesickness.

“It made us realize that we had no support network out there, that being so far away from family was scary,” Mahalia said. “It’s all good and well when you’re young and healthy, things are going smooth, you can have all the adventures you want. But then when you start thinking about things like death or what would happen to your child if something happened to you, then it’s like, “OK, we need to go home.’”

To honor his wife’s wishes, Ryan took a job in Vermont. It was there that he launched Casita Cerveceria, making his beer on weekends at Hill Farmstead Brewery, where he worked full time as a brewer. After two years, he decided to bring his family and his business back home to North Carolina.

“It just feels like time,” Ryan said in a phone interview from Vermont, where he was packing up the last of the family’s belongings to make the 16-hour drive to North Carolina.

“We have been traveling for this long time, seeing the world and getting a lot of different experiences, but now our daughter is about to enter first grade. We’re getting older; our parents are getting older. It just seems like the natural place for us to be,” he said. “When we made this decision that we wanted to try to open our own brewery, it just seemed obvious that that would be in North Carolina.”

Ryan will not be opening a brewery the way he did in England. Instead, he will have a contract with Duck-Rabbit owner Paul Philippon, who gave Ryan his start in the industry 10 years ago.

“We’ll be doing what’s called in the industry contract brewing,” Ryan said. “But for our situation, I’m going to go physically brew the beer because I’ll be living right down the road, and I know how to use the system already after brewing there for a number of years. Paul and I have a strong relationship, so it won’t be like your standard contract brewery.”

Before settling in at Duck-Rabbit, Ryan will spend this month collaborating with other brewers across the country, blending some work with the family vacation.

The couple aims to have one keg from each of the collaborative brews brought back to the Greenville area to give people a literal taste of their road trip.

Once they park their Subaru Outback, one of the things Ryan and Mahalia are most excited about is simply drinking in the familiar flavor of home. And that doesn’t just mean eastern North Carolina barbecue (though Ryan said that’s important, too).

“We just want to be closer to family,” Mahalia said. “We’ve got lots of friends that still live in Greenville, and they have kids that are the same age as my daughter. Every time we’ve been back there to visit, it feels like nothing’s changed. It’s such a good feeling of familiarity. We’re really looking forward to that.”

Ryan has the same sentiment.

“We’ve had this crazy experience of living in Europe for six years and seeing all this stuff, and yet in the end we’re going to just be coming right back to where we got our start together,” he said. “(We are) moving right back to the place where I got my start as a brewer and where I met my wife and hopefully starting a new chapter.

“Something we’ve learned from living in all these different places is a lot of times you don’t even take advantage of the place that you live and you take it for granted. And then later on you realize, ‘Oh, there’s all this cool stuff that I missed out on that I could have experienced,’” Ryan said. “North Carolina’s like that for us too. We might have grown up there, but there’s a lot of North Carolina that we haven’t seen yet, that we haven’t explored.”