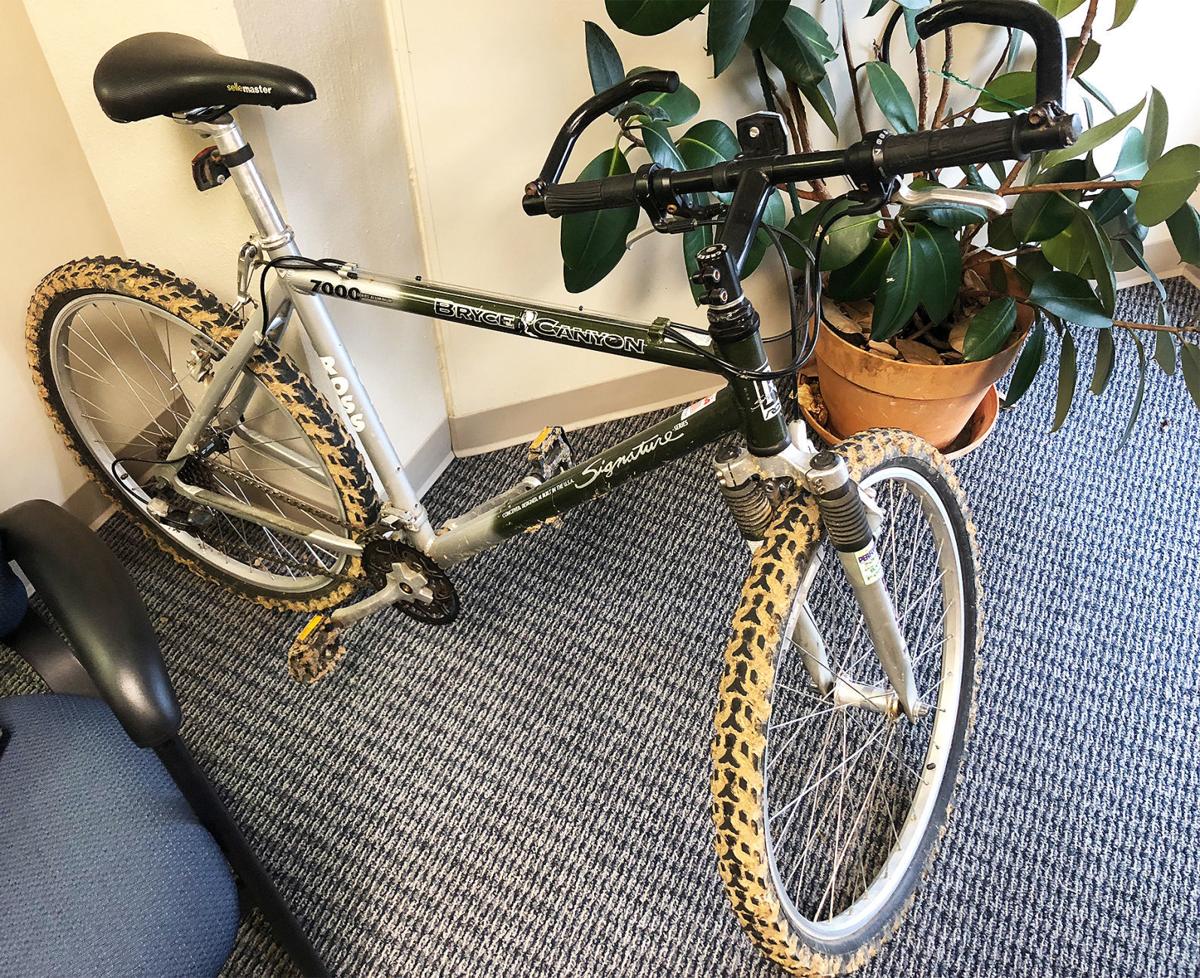 A muddy mountain bike in the office will carry a reputation for fitness only so far.

When I came to work at the community college, the orientation tour included a separate facility located across the highway from the main campus. I suggested to someone that the large expanse of woodland on that side of campus would be a fantastic spot for a fitness course.

An eye for healthy living is a fine quality to exhibit when starting a new job.

Within months, the college had a new president. He saw the same potential in those woods and went to work establishing a hiking and biking course.

It just so happened that I owned a mountain bike, which had been hanging inside a garage for many years. In its day, the Bryce Canyon 7000 Signature Series, made by Ross, was state-of-the-art mountain biking equipment.

I have seen mine go from state of the art to “work of art” — on display in my office for three years now. It has seen the trail exactly two times.

The most recent ride — about two years ago — was quite treacherous due to a recent rain storm. I found that muddy tires have made the bike a stronger conversation piece. So I left the mud in place.

When I purchased the bike secondhand during the late 1990s, it was actually in never-used condition. I have managed to maintain that condition for decades. Simply washing the tires can bring it back to new, anytime I want.

Keeping a muddy mountain bike inside your office, however, projects a certain image. Someone from administration saw it more than a year ago and suggested that I would be a good fit for the bike trail committee.

The president, who often wheels into the parking lot with his mountain bike mounted on the back of his sport utility vehicle, leads the bike trail committee meetings. He has spearheaded the trail’s construction, the naming of its various loops, and the crafting of cooperative agreements with local bike clubs.

I mostly just listen and let my dirty bike do the talking. I think the other committee members might be on to me.

What they do not know is that I was a trail biker long before there was any such thing as a mountain bike.

I did not have an off-road motorcycle like a lot of other kids during the late 1960s and early ’70s. On the dirt-bike trails behind our neighborhood, I pedaled my Schwinn, two-speed kickback Sting-Ray. The banana seat — styled to resemble a motorcycle saddle — was a solid landing pad for going over jumps fashioned from dirt piles.

Why makers of modern mountain bikes do not outfit them with banana seats is beyond me. Even my vintage ’90s model has one of those skinny little racing seats. Maybe the tiny seats make sense for road-racing bikes, but mountain biking is bumpy business.

I didn’t have much in the way of a “natural” landing pad when I was a kid on a banana seat. I probably have even less natural padding today.

The choices are clear. Either wash the tires and donate the mountain bike to a museum, or swap the saddle with a vintage Sting-Ray banana seat.

Now that would make a great conversation piece.