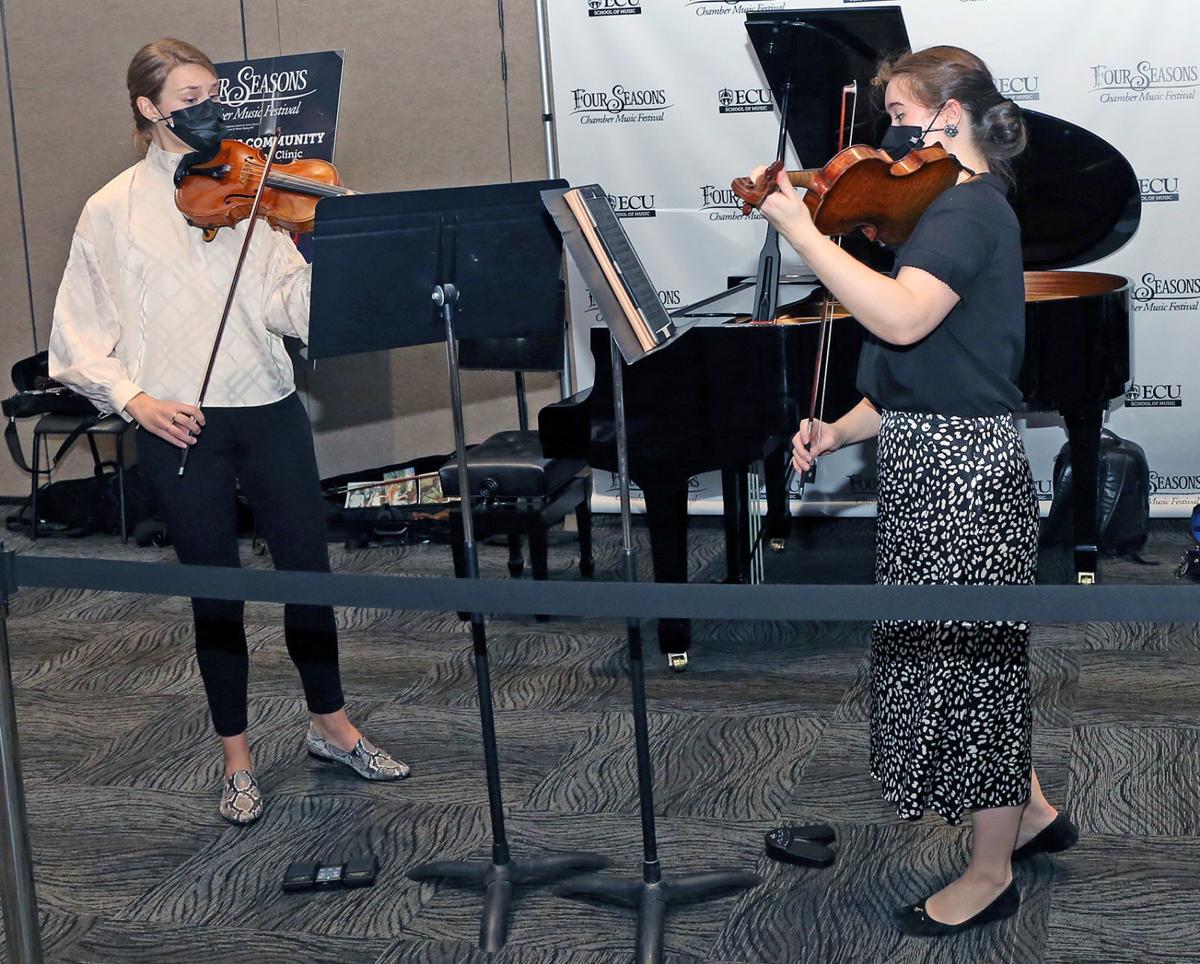 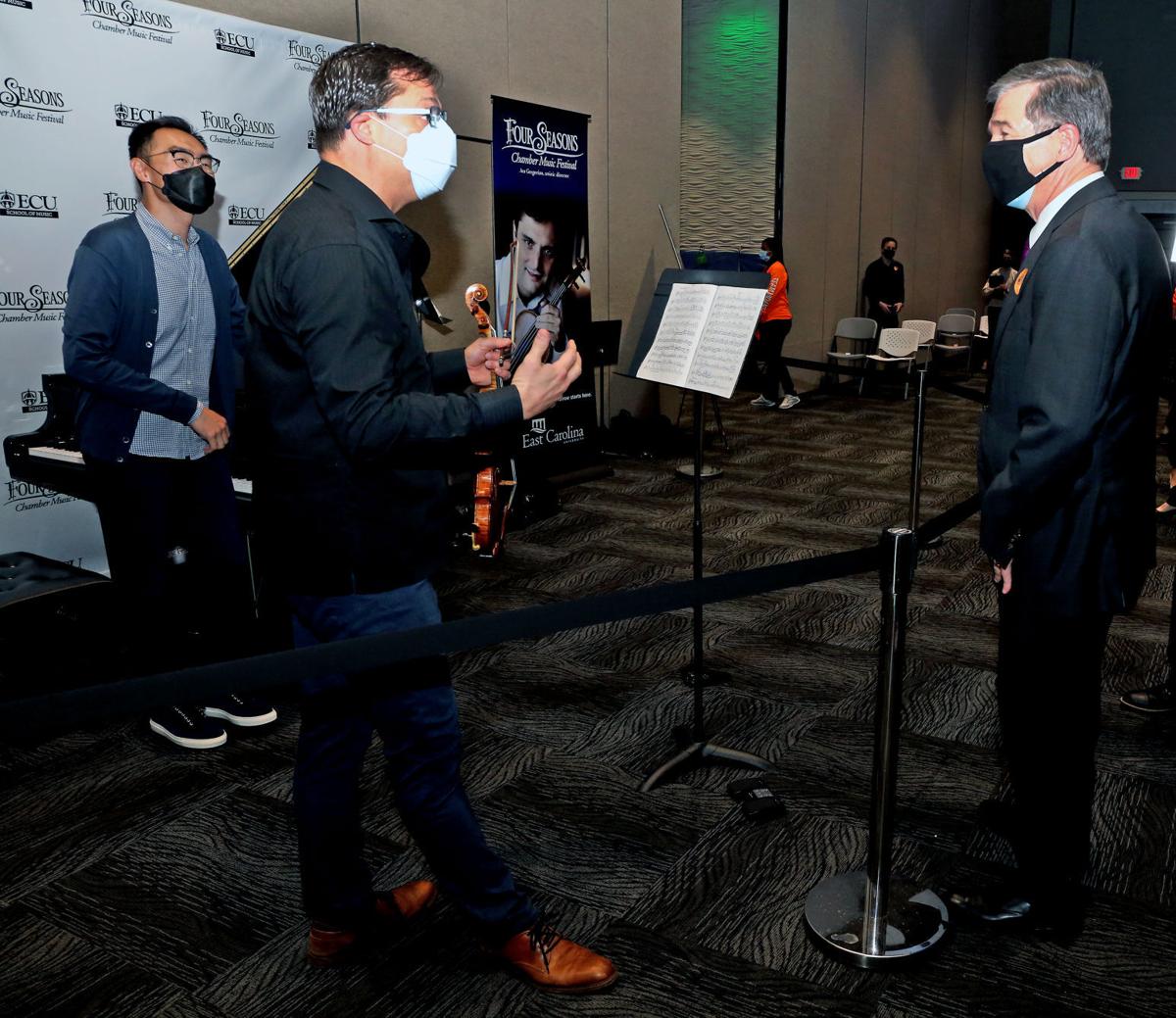 Gov. Roy Cooper speaks to Ara Gregorian, artistic director of Four Seasons Chamber Music Festival, about the Dose of Hope performances during the governor’s visit to the Greenville clinic in March. 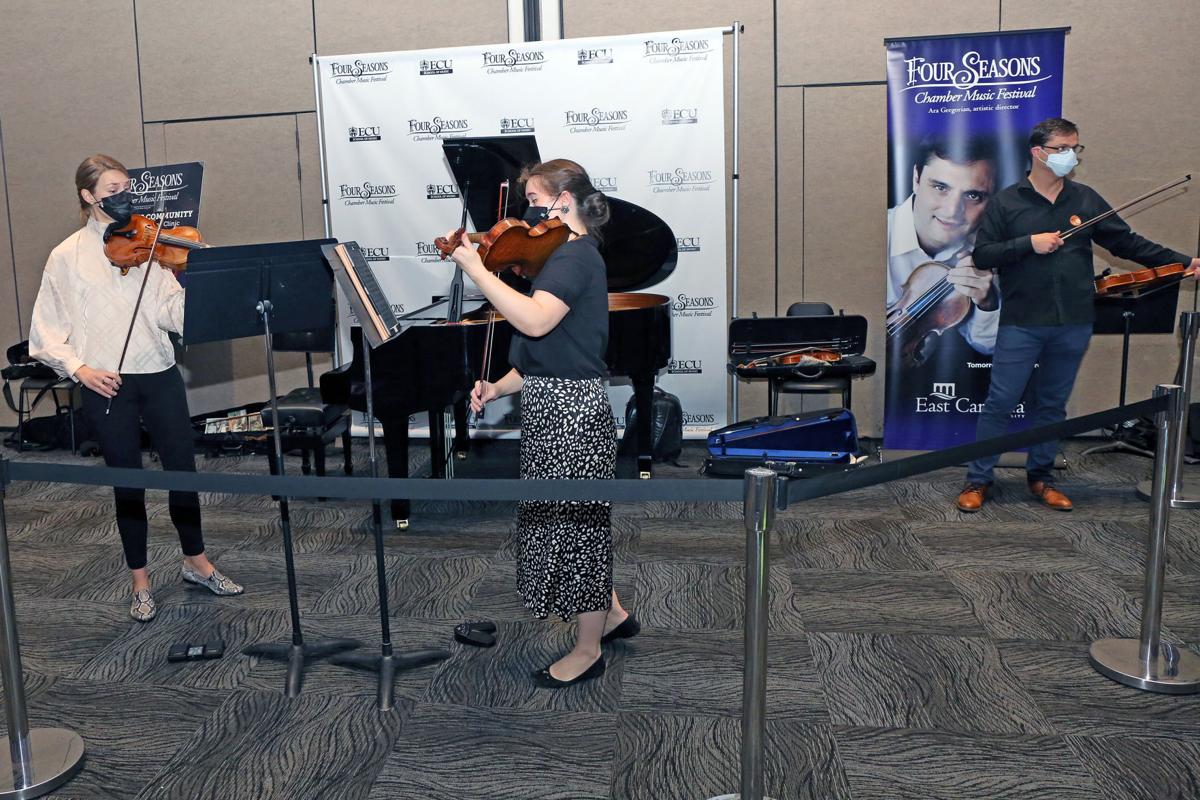 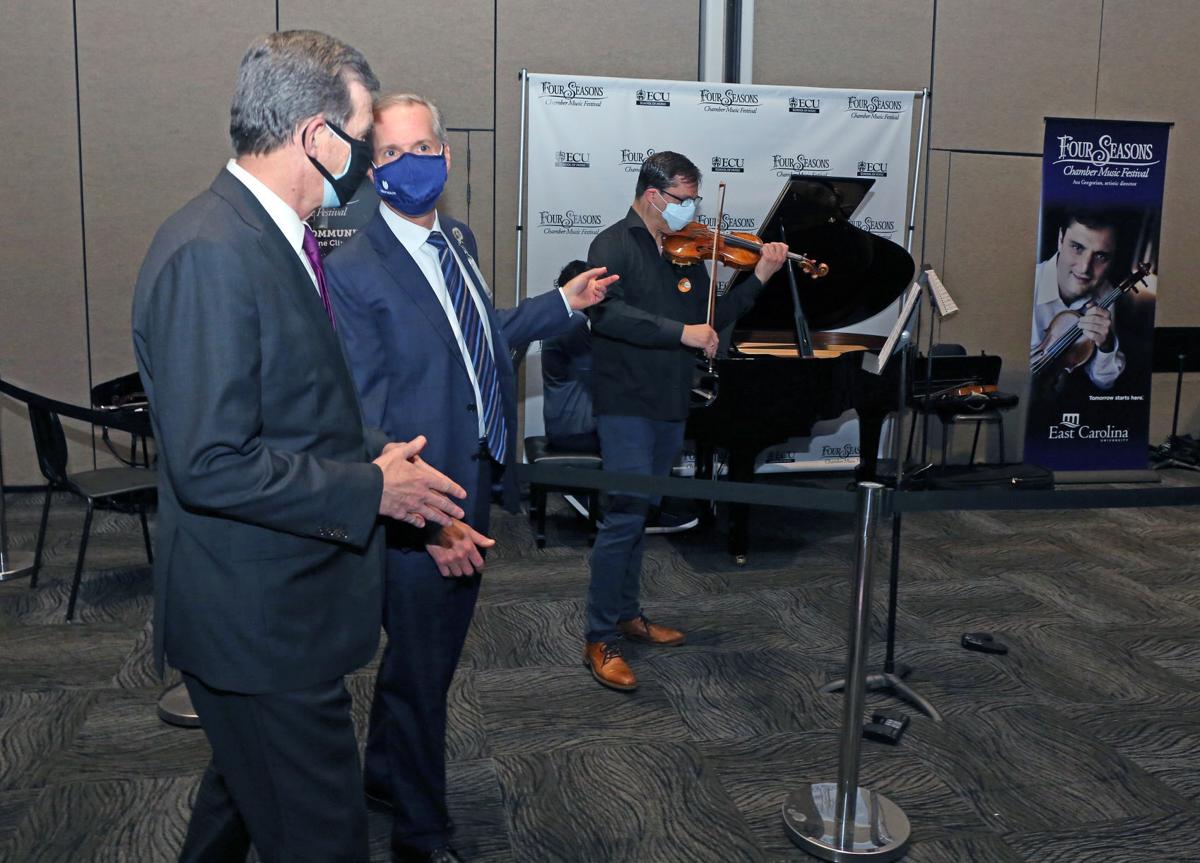 Mike Waldrum, CEO of Vidant Medical Center, explains to Gov. Roy Cooper on his recent visit that live music that was being provided by ECU’s Four Seasons. 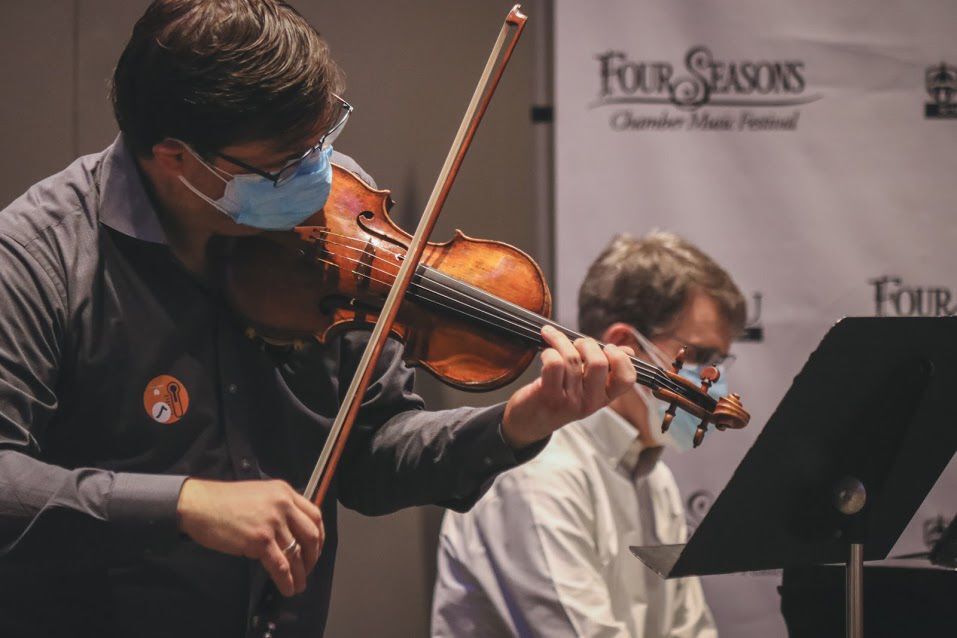 Gov. Roy Cooper speaks to Ara Gregorian, artistic director of Four Seasons Chamber Music Festival, about the Dose of Hope performances during the governor’s visit to the Greenville clinic in March.

Mike Waldrum, CEO of Vidant Medical Center, explains to Gov. Roy Cooper on his recent visit that live music that was being provided by ECU’s Four Seasons.

World-renowned cellist Yo-Yo Ma made headlines last month when he gave an impromptu concert upon receiving a COVID-19 vaccine in Massachusetts. But at a vaccine clinic at the Greenville Convention Center, instruments accompany inoculations every day.

Since February, the Four Seasons Chamber Music Festival has presented nearly 80 Dose of Hope concerts at the Vidant/Pitt Large-Scale Vaccine Clinic. Thousands have heard notes from classical composers including Mozart, Bach and Shubert coming from the clinic’s observation room.

“The pandemic, in general has caused a lot of musicians to really assess what we do and what our value in society is,” said Ara Gregorian, a distinguished professor in ECU’s school of music who is founder and artistic director of Four Seasons. “When this vaccine clinic came about, we came to the idea that this would be an ideal way to bring what we do to people in our community at a point in their lives that is very emotional and important.”

In response to the coronavirus pandemic, artists have offered music as medicine at clinics from New York to the United Kingdom. Volunteers from Richmond Philharmonic have performed at COVID-19 vaccine clinics at Richmond Raceway. Vaccinations have been accompanied by hours of organ music at England’s historic Salisbury Cathedral.

Twenty musicians have taken a turn performing two to three concerts a day in Greenville to provide a calm environment at what has been a chaotic event in some other cities. Clinic workers, participants and volunteers have paused to listen to the soothing sounds of violin, viola, cello and piano.

“In some cases people are a little apprehensive about getting a vaccine,” Gregorian said. “In other instances they’re overjoyed at having just gotten a vaccine.

“People will come up and just thank us and say how much this means, or we’ll get emails from people we’ve never heard from before thanking us for what we’re doing,” he said. “One of the National Guard members that helps people outside came in and said, ‘I took my 15-minute break; I had to come in here and listen to this music because I love it so much.’”

But Dose of Hope concerts have not only been a benefit for the listeners. They have been a shot in the arm for young professionals whose musical careers have been all but silenced during the pandemic.

“For the majority of our artists, almost all of them, the vaccine clinic is the first public concert they’ve played in a year,” Four Seasons Managing Director John Holloway said. “To them, this is a concert hall.”

“For us, especially as young professionals, all of our freelancing gig opportunities and performance opportunities, they’ve been all kind of taken away, unfortunately,” she said. “They’re out there but very, very scarce.”

Kim, who received her master of music from ECU in 2018, is pursuing her doctorate at the University of Michigan. But when the pandemic caused her courses to be moved online, she moved to Greenville to live with her sister.

Gregorian said the pandemic has presented numerous challenges for young professionals who are struggling financially as well as artistically as opportunities to perform with other musicians have been limited.

“I’ve had a few different former students call me saying, ‘Is this really the path I should be taking now? I see so many things closing down and I’m worried about how it’s going to open back up again,’” Gregorian said. “The Dose of Hope concert series is also creating hope for these young musicians to continue along with what they’re doing.”

Through donor support, Four Seasons has been able to pay a dozen alumni of its Next Generation program for performing at the Convention Center clinics. Gregorian and Four Seasons guests artists receive no compensation for the concerts that they perform.

Musicians, who are masked, are distanced from patients and from each other at concerts, which are, in many ways, like traditional performances. Patients in the audience sometimes linger for longer than their required waiting period after their vaccines. Many applaud between pieces.

“I know it’s not like a full-on concert where they’re paying 100 percent attention to you, but it is very nice to be able to perform and it means a lot for musicians,” Kim said. “It’s been a long time for me and I’m just happy to be out there.”

Although violist Maria Lambros has performed as a chamber musician in venues such as London’s Wigmore Hall, the Konzerthaus in Vienna, Carnegie Hall and New York’s Lincoln Center, the Grammy Award nominee said she was honored to perform at the Convention Center clinic.

“There’s a lot of hope with getting the vaccine,” Lambros said. “I know that I was really relieved when I got both of mine because I just felt safer and less anxious. I think that’s a real moment for people in these uncertain times. It think that having beauty and art as part of that is really a wonderful thing.”

Lambros, who is on the faculty of the Peabody Conservatory of Music, is founder and artistic director of Our Joyful Noise Baltimore, a nonprofit organization that aims to make professional quality live music accessible in places where it usually is not heard. Prior to her performance at the vaccine clinic in Greenville, Labros’ last concert with a live audience was an outdoor event at a veterans’ shelter.

“A concert at the vaccine center or in a shelter or a prison really should be the same as in Carnegie Hall because we’re all human beings and we all need access to beautiful music,” she said. “Any kind of playing for people, whether it’s a community venue or a fancy concert hall, it’s all the same. It’s all important and valuable.”

The Convention Center clinic is closed for the remainder of the week due to another scheduled event. Vidant on Thursday opened a new clinic in the former location of Vidant Minor Emergency on Arlington Boulevard. The Convention Center site is scheduled to reopen on April 13 to complete already-scheduled second doses only.

Holloway said Four Seasons is committed to seeing the process through and plans to continue concerts through the anticipated site closing date of April 23.

Kim, who has made a dozen or more appearances at clinic concerts, said she would gladly take another turn at a Dose of Hope performance.

“I am definitely honored to be part of the process,” she said. “During the pandemic, I’ve thought about where music is essential. Is is essential to humanity, but a lot of times it is the first thing to be taken away. … We’re part of a dose of hope, and it’s essential.”