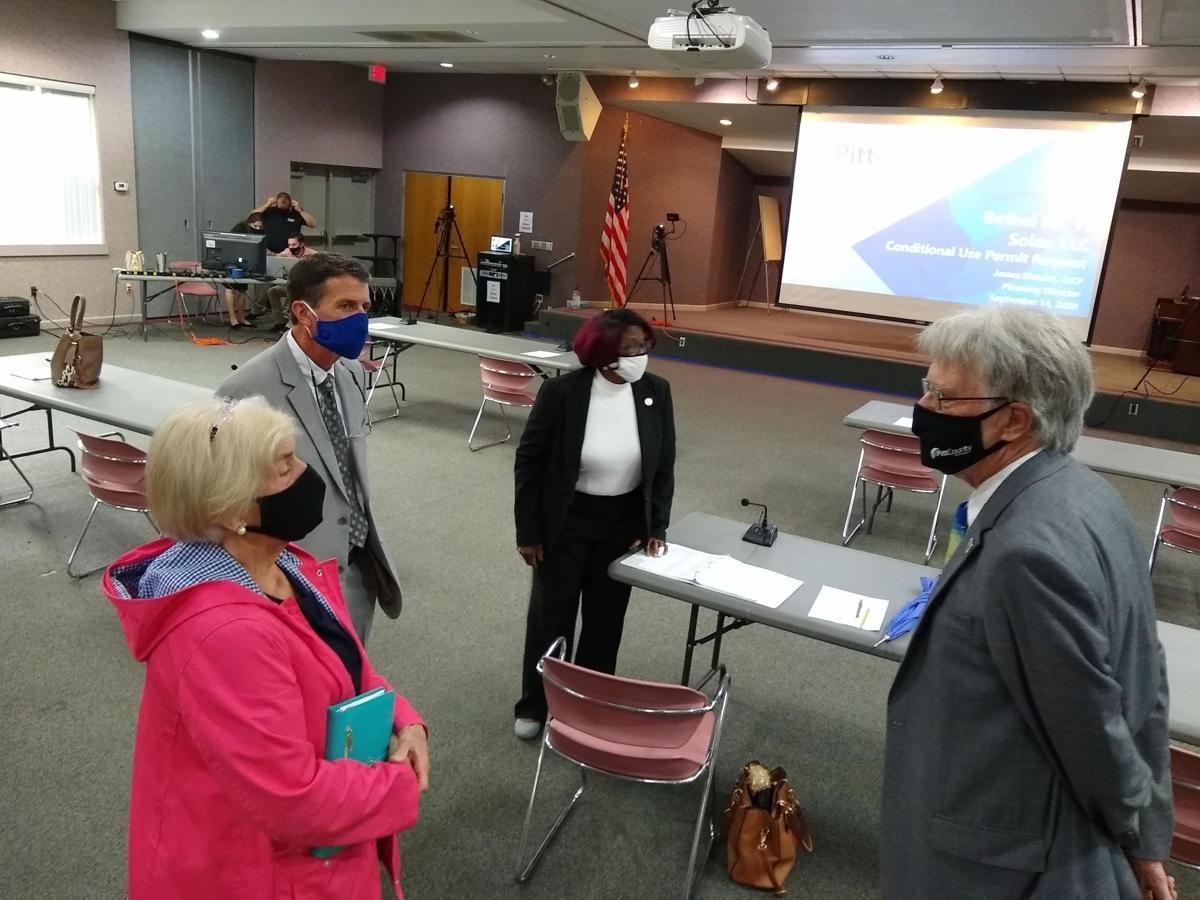 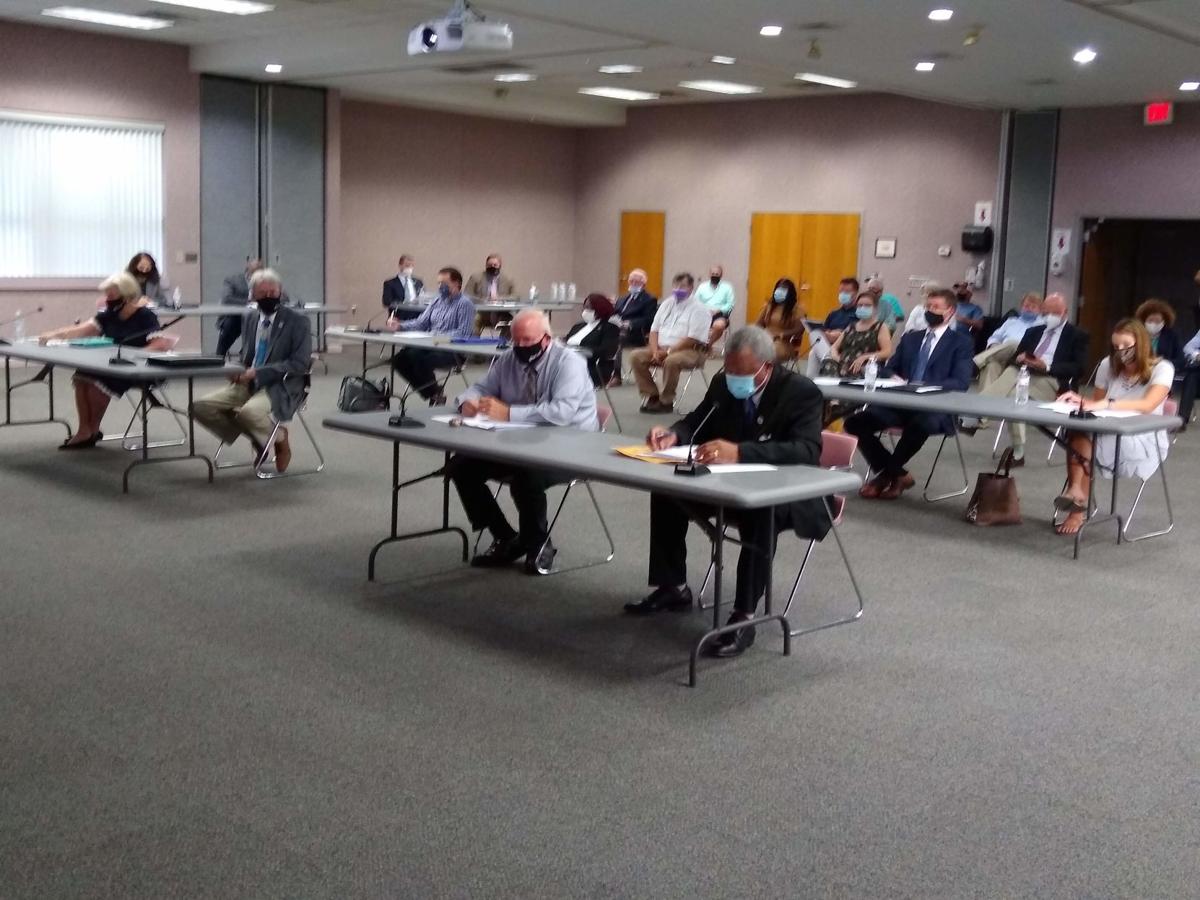 The Pitt County Board of Commissioners gathered in the Mark Owens Jr. Auditorium at the Pitt County Agricultural Center to hold three public hearings on conditional-use permit requests.

The Pitt County Board of Commissioners gathered in the Mark Owens Jr. Auditorium at the Pitt County Agricultural Center to hold three public hearings on conditional-use permit requests.

A permit to build a 942 acre solar farm in northern Pitt County was among three permits granted during the first in-person meeting of the county Board of Commissioners since March.

The board, meeting in the more spacious Mark Owens Jr. Auditorium at the Pitt County Agricultural Center, voted 6-2 to authorize the development of the energy complex along N.C. 11 and N.C. 30. Commissioner Ann Floyd Huggins received an excused absence.

SunEnergy1, a Mooresville-based company doing business as Bethel NC 11 Solar, wants to build the facility on multiple parcels of property outside of Bethel.

Planning and Development Director James Rhodes said about one-third of the property, 317 acres, is located in the county’s planning jurisdiction. The remaining property is located within the Town of Bethel’s extraterritorial jurisdiction. Bethel approved the project earlier this year.

The property under the county’s jurisdiction is located at the intersection of Big Oak and Ford roads and the northern side of N.C. 30, east of its intersection with N.C. 11 North.

The request was opposed by a pair of speakers. The first, Lawrence Watts, said he was having difficulty hearing and asked to be excused.

Concerns from Bill Lee centered on who would be responsible for removing the equipment once it became obsolete. Lee said, as a builder and developer, he knows people are looking to build in areas outside Greenville and believed questions about the future of the solar farm should be answered.

Beth Trahos, an attorney representing SunEnergy1 objected to Lee’s comments, saying they fell outside a quasi-judicial process. A second objection from Trahos earned a rebuke from Commissioner Tom Coulson.

He asked Pitt County Attorney Janis Gallagher if Trahos was permitted to interrupt another speaker. “Why does (Lee) have to be faced by a combative person?” Coulson asked. “It makes me suspicious.”

“It is appropriate Commissioner Coulson but it’s not something you typically see,” Gallagher said. “We don’t typically have attorneys involved in our quasi-judicial hearings, ours are usually much more informal.”

Commissioner Alex Albright said Watts had emailed him about his objections, which were related to state rules and not actions controlled by the county.

Commissioner Beth Ward said farmland owners near the site were invited to public forms held by the Town of Bethel and many supported the project. “It’s a clean type of industry that doesn’t interfere with farming,” she said.

Ward also said her husband’s family has property near the site.

Ward was asked if she needed to recuse herself from the vote because of the connection. She said no because her family isn’t involved in the project.

Rhodes said the land in the county’s jurisdiction must have a 50-foot setback from property lines and 100-foot setback from any residence. That setback is extended to 150 feet for placement of inverters, devices that convert energy collected by the solar panels into alternating current.

All stream features present on-site are subject to a 50-foot riparian buffer, unless the state Division of Water Quality or the Pitt County Planning Department exempt them from the Tar-Pamlico buffer regulations.

Chris Sandifer, an engineering consultant with the project, spoke about his experience as a property owner leasing land to a solar company to assure commissioners that no toxins are released by the solar panels.

Linda Nwadike, SunEnergy1 director of permitting and community relations, said a double row of trees will be planted along major highways and homes. If the solar complex is decommissioned and equipment removed, it can return to agricultural use.

No one spoke in opposition to two other conditional use permit requests. Both were approved unanimously.

This is considered a major modification of her existing conditional-use permit so she must get a new permit. Pollard said she isn’t enrolling more students.

“The students I have, they are growing bigger and the current room I have is getting smaller,” she said.

American Materials Company plans to expand its sand mine operation at the intersection of Stokes and Old River roads.

The company was issued a permit in 2012 to operate a sand mine of nearly 236 acres. So far near 67 acres are being excavated.

Part of the proposed excavation area falls in the previous required buffer zone.

The conditions approved by the commissioners require the mine to get approval from the Federal Emergency Management Agency, have a 50-foot riparian buffer on all stream features present on the site or obtain documentation showing they are exempted from the Tar-Pamlico buffer regulations.