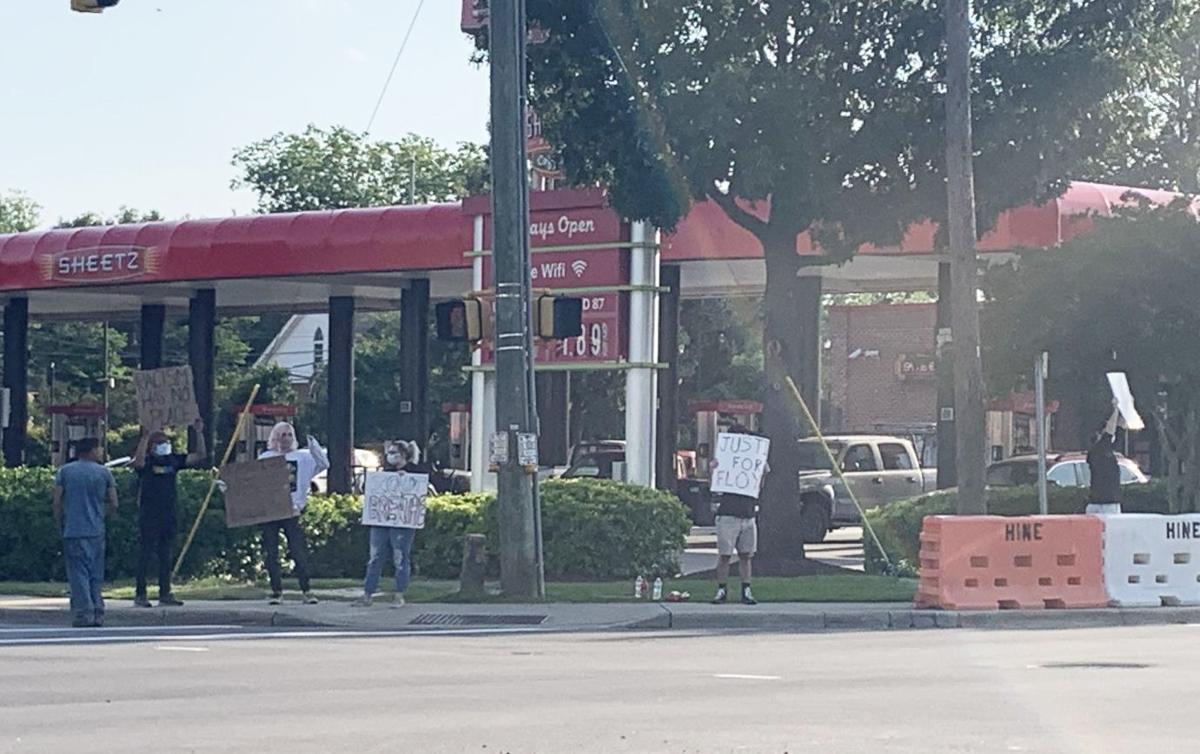 A group of protesters hold up signs in front of Sheetz in Greenville. 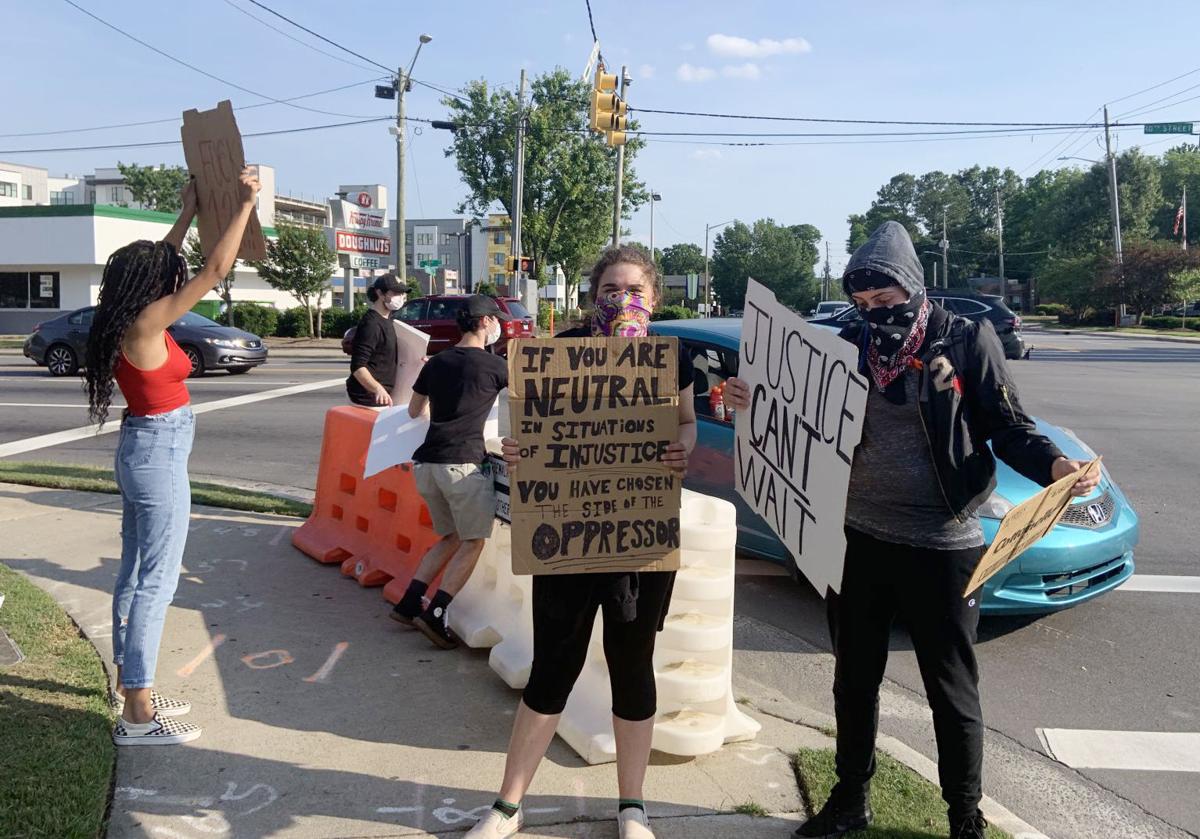 Protesters hold up signs at the corner of 10th Street and Charles Boulevard in Greenville. 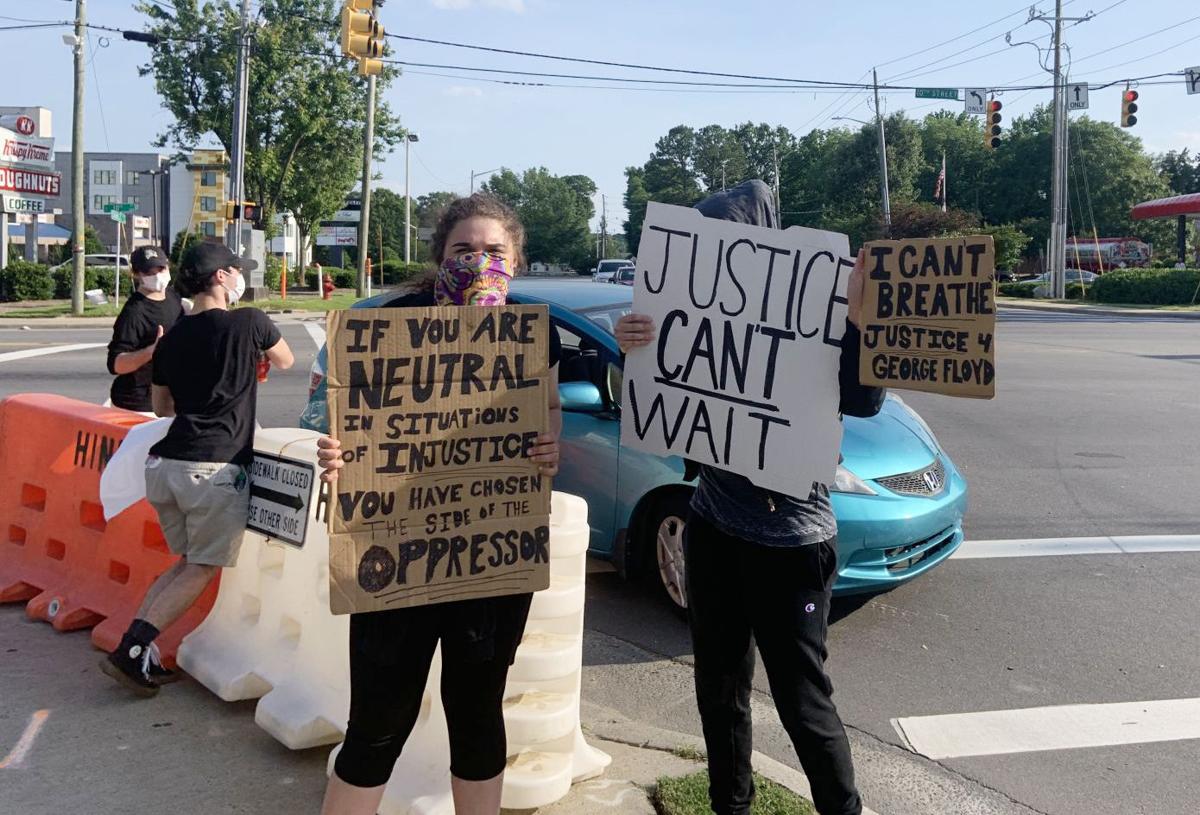 Demonstrators hold up signs in front of McDonald’s in Greenville on Tuesday. 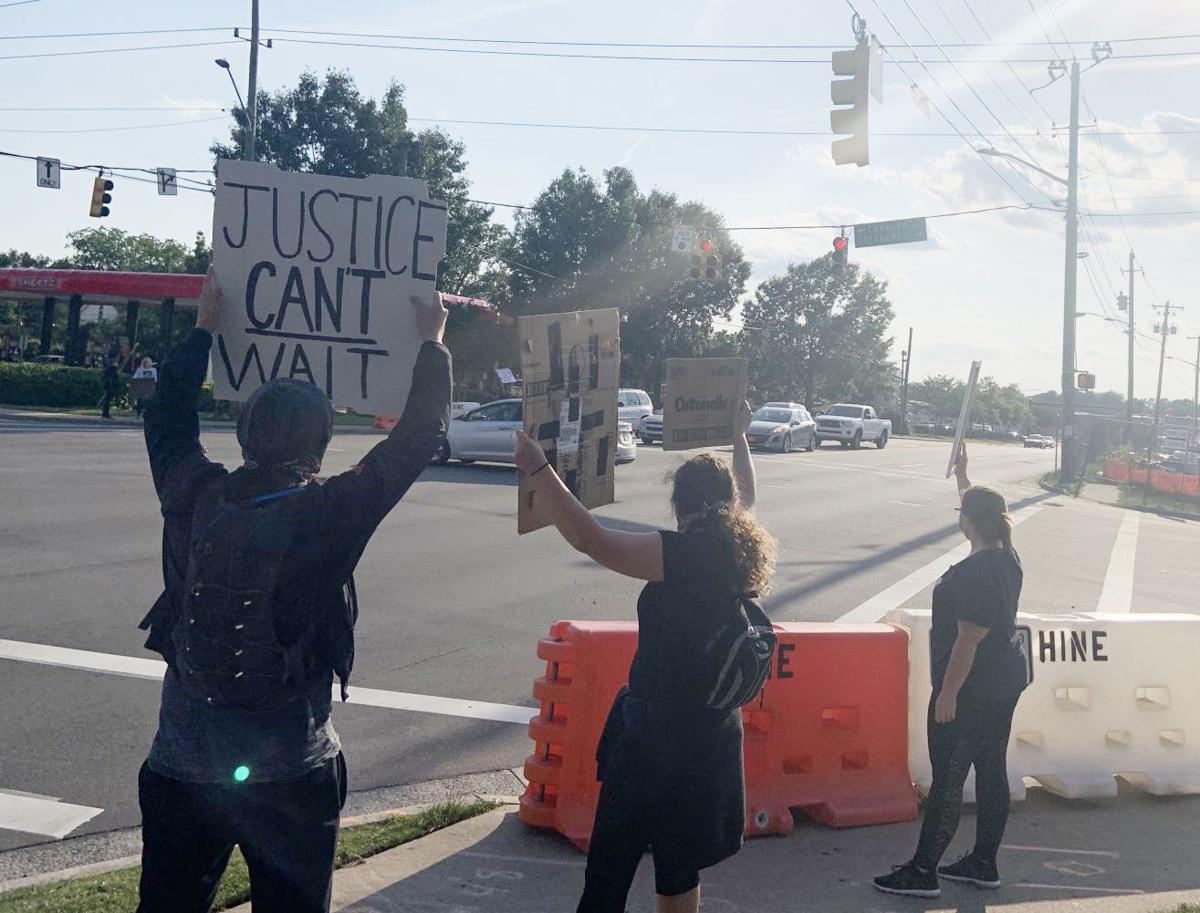 Protesters hold up signs on Charles Boulevard in Greenville. 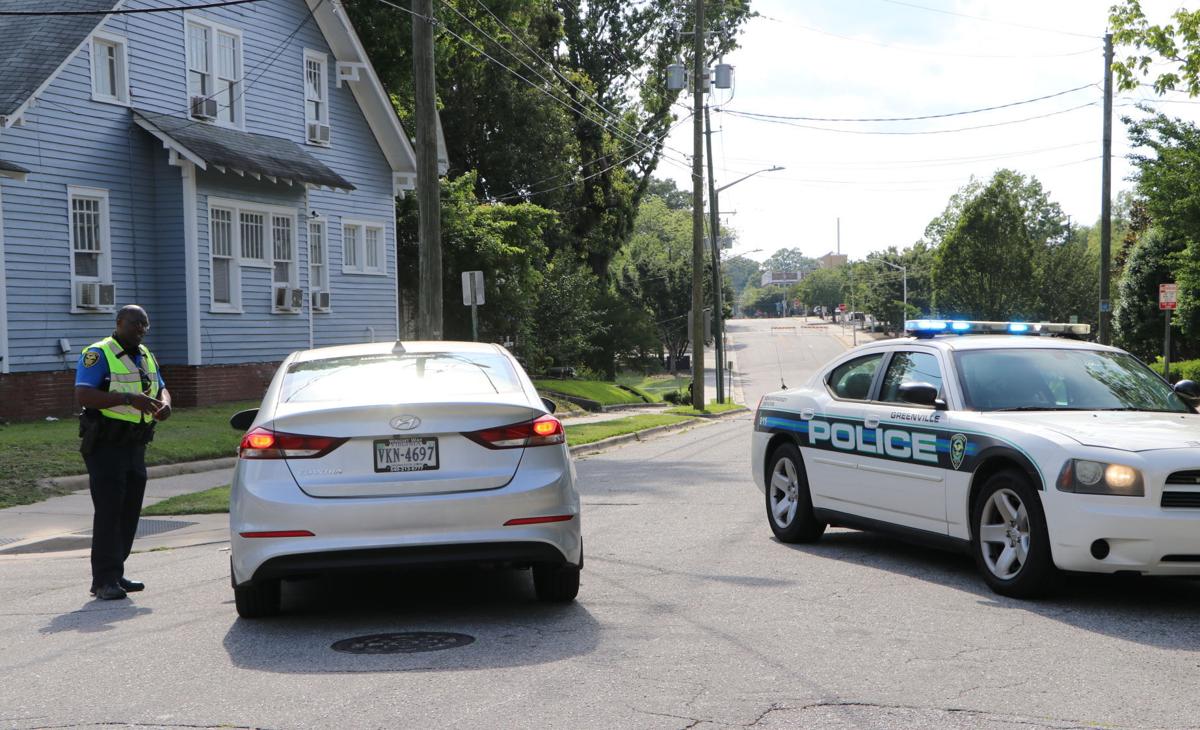 A Greenville police officer directs a car away from downtown on Tuesday at a roadblock on the corner of Holly Street and Fourth Street.

A group of protesters hold up signs in front of Sheetz in Greenville.

Protesters hold up signs at the corner of 10th Street and Charles Boulevard in Greenville.

Demonstrators hold up signs in front of McDonald’s in Greenville on Tuesday.

Protesters hold up signs on Charles Boulevard in Greenville.

A Greenville police officer directs a car away from downtown on Tuesday at a roadblock on the corner of Holly Street and Fourth Street.

Greenville authorities shuttered downtown businesses and government offices on Tuesday and again issued a curfew over concerns that a demonstration could result in further damage like one did on Sunday.

A group of about 10 peaceful demonstrators stood at the corner of 10th Street and Charles Boulevard/Cotanche Street about 5:30 p.m. after social media posts alerted Greenville Police Department officials that a protest of police-involved killings was possible.

Members of the group in front of Sheetz and McDonald’s said they had no intention of becoming violent. They simply wanted to exercise their right to free speech in reaction to the death of George Floyd in Minneapolis, Minn., and others they said were killed unjustly by police.

“I’m tired of seeing innocent black people being killed just because they’re black,” said a protestor who identified herself as Madison. “Like, there’s the white people protesting the coronavirus had AKs and ARs and no tear gas, no rubber bullets, no nothing, and we’re just holding up signs and chanting and we’re being demonized.”

Protesters on Sunday did more than hold up signs. More than 30 properties and a dozen police vehicles were damaged and several police officers suffered minor injuries after up to 200 rioted in downtown streets. Madison said she was at the protest on Sunday and said it began peacefully. She left before the violence started, she said.

The demonstrators on Tuesday said they were a group of friends not affiliated with any organization. They planned to go home before curfew to avoid breaking any laws, they said. The group chose the intersection because it has a lot of traffic and downtown was blocked off.

“We’re just holding signs up. We just want to get the message across,” Madison said. “We’re not trying to cause any trouble, we just want people to know black lives matter and that you have to fight for this, and as a white person it’s your job to use your voice when you see injustice.”

Another demonstrator who identified herself as Jamilla said the lives of her brothers and sisters were being taken. She said now black people are stepping up and people will not be able to turn their eyes away.

Rumors of a protest spread on Tuesday afternoon leading to a heavy police presence. Authorities closed the Pitt County Courthouse and other governmental offices and asked businesses to close. Law enforcement blocked streets into the downtown area for the second night straight.

Greenville Mayor P.J. Connelly, who ordered a curfew beginning 8 p.m. Monday night until 6 a.m. the next day, ordered another curfew for Tuesday night at 8 p.m.

Greenville police also stood by at the department headquarters and in the area of City Hall, which saw damage on Sunday. Officers began removing barricades around 6:30 p.m., but officials remained on alert.

The police department warned residents via social media alerts to avoid the area because it had been made aware of the potential for protests. “Please be advised that officers are in the process of shutting down roads at this time,” a post said.

A second post said road were being closed to vehicular traffic to “ensure those wishing to exercise their First Amendment rights can do so safely and peacefully.” It then issued a reminder about the 8 p.m. curfew.

The department also responded to widely circulated social media post that stated the department had confirmed a report that six bus loads of Antifa rioters headed to Greenville.

“This absolutely was NOT confirmed by GPD and we have no credible information to suggest this is true,” the police department response said.

Both East Carolina University and Pitt County Schools on Tuesday took to social media as well to denounce what they characterized as hateful speech and racial remarks by students — although it wasn’t clear if the remarks were made in regard to protests or the death of George Floyd.

ECU Vice Chancellor Virginia Hardy said remarks will not be tolerated. Interim Chancellor Ron Mitchelson said “recent use of hateful language by a few individuals associated with ECU is disgusting. All of these cases, whether student or employee, are under review. VC Hardy is right, enough is enough!”

A statement from Pitt County Schools said officials had been made aware of several students who used racial slurs and made derogatory statements in posts on personal social medial accounts.

“Their statements are grossly inappropriate, appalling and only add to the current upheaval in our community and our nation,” the statement posted by the school system said.

Bobby Burns contributed to this report. Contact Elizabeth Johnson at ejohnson@reflector.com and 329-9566.