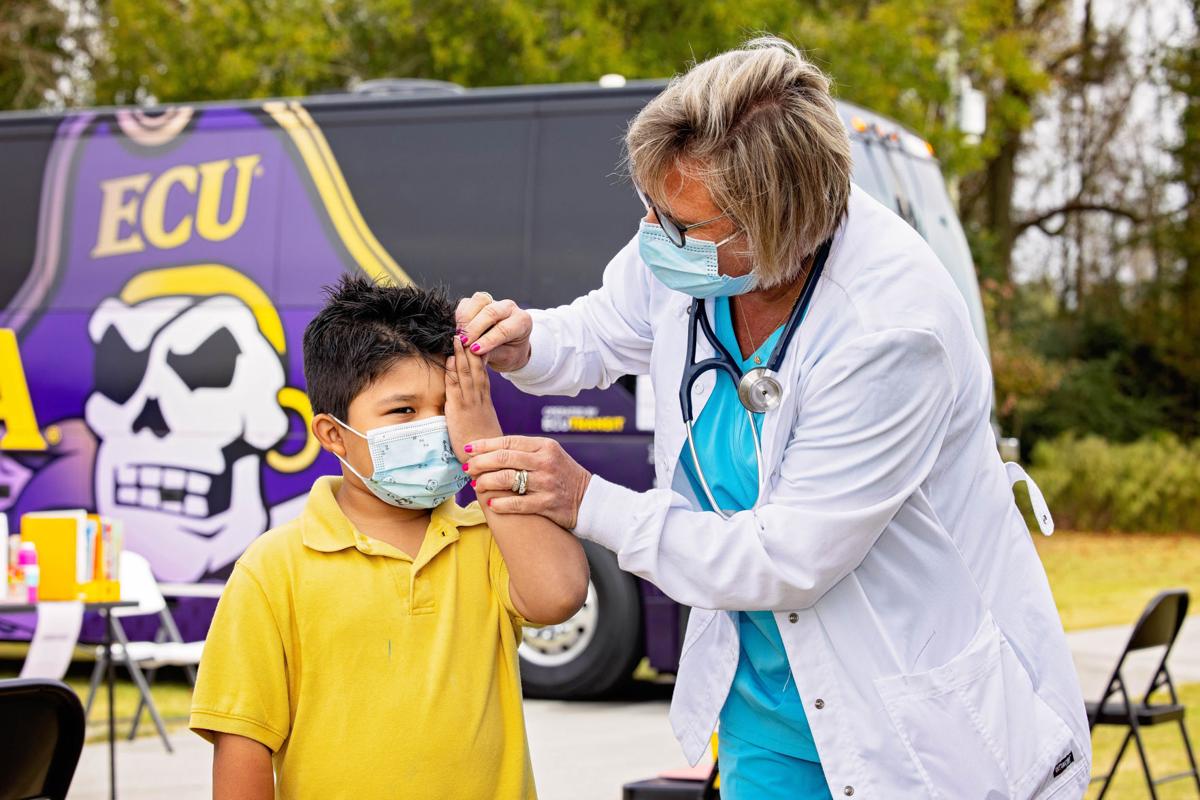 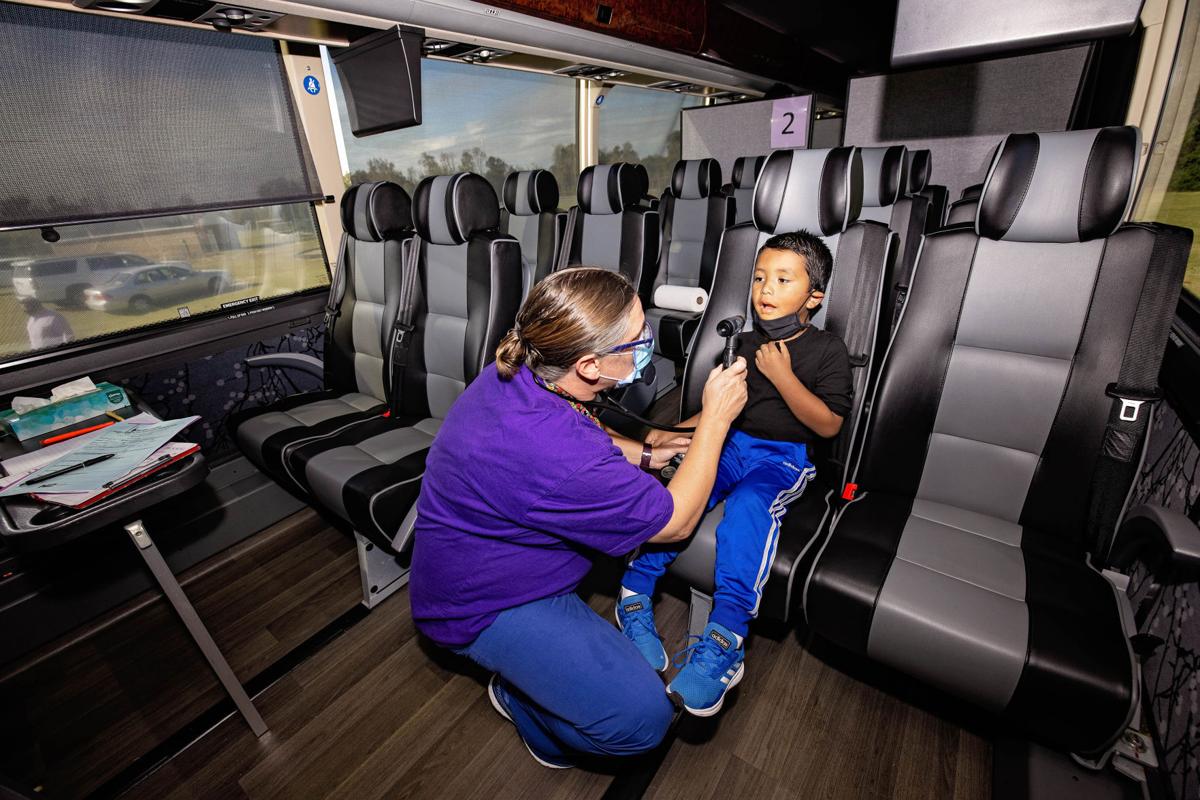 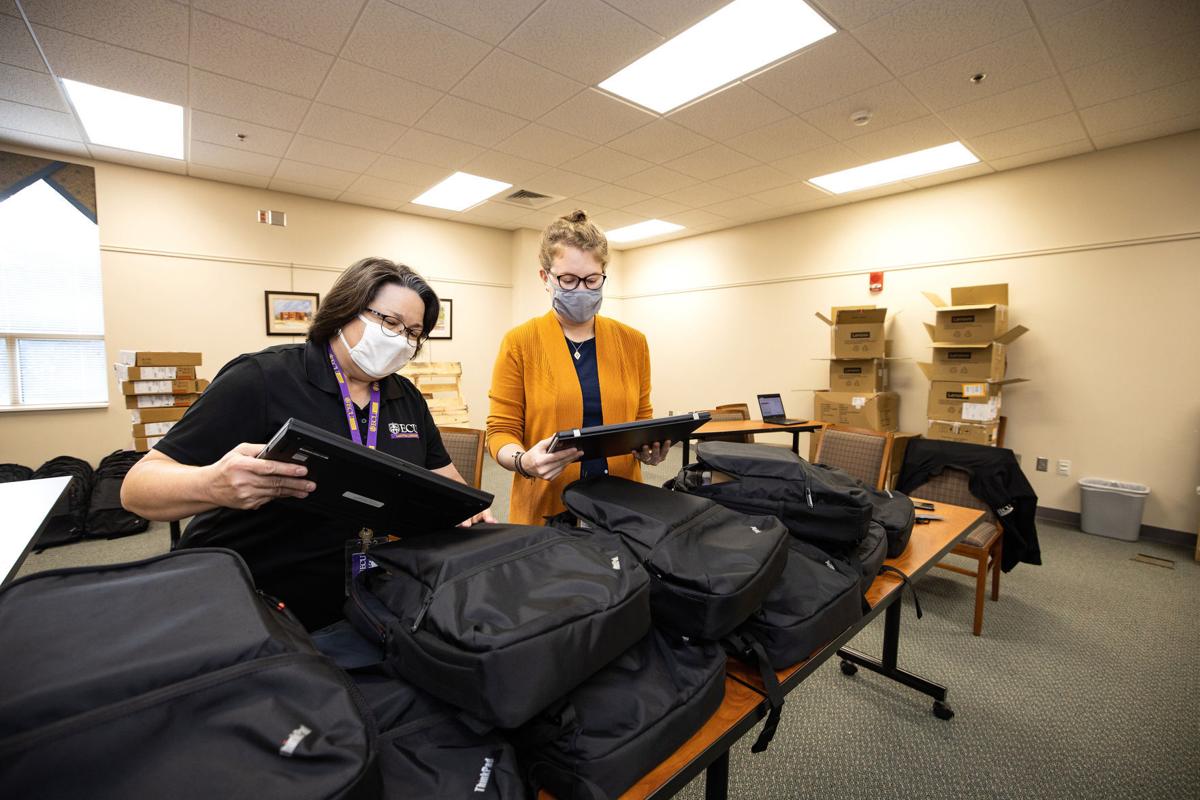 An East Carolina University Brody School of Medicine-led initiative that provides telehealth screenings to eastern North Carolina children has enlisted a creative way to bring health care to the students during the COVID-19 pandemic.

Since September, ECU’s Healthier Lives at School and Beyond School-Based Telemedicine Program has used an ECU Transit bus to visit schools in Duplin County to connect students and staff with quality behavioral health, nutrition, dental and acute medical care services. The mobile unit has been used to provide screenings for close to 100 students so far, with additional visits planned.

The program, created in 2016 through a $1.2 million grant from the Health Resources and Services Administration (HRSA), initially screened students using telemedicine — secure video connections between the schools and health care providers. Because many schools shifted to virtual learning, the Healthier Lives program made a transition as well by using the mobile unit.

“This is in direct response to COVID. We were having a lot of difficulty getting in contact and in reach with the children, so the mobile unit is in response to that difficulty,” said Jill Jennings, ECU’s project coordinator for the program. “We’re going a hybrid route, a bus going in person to them, making it easier for us to then communicate with the parents in person and then be able to hopefully generate nutrition referrals, behavior health referrals and oral health referrals by providing these physicals.”

The Healthier Lives at School and Beyond program is the first school-based telemedicine program of its kind in the region, according to Jennings, and is a collaboration among ECU, Duplin County Schools, the Center for Rural Health Innovation, the Duplin County Health Department and Goshen Medical Center.

The first four years of the grant were funded by HRSA; funding now comes primarily from the Anonymous Trust, a private North Carolina foundation.

ECU Transit also stepped in this fall to help solve the problem of provider access to students.

“We were very appreciative of the ECU Transit people we talked to. They agreed to take a fancy bus that the football and basketball players ride on, took out rows of seats and created a mobile medical van out of an ECU Transit bus,” said Dr. Doyle “Skip” Cummings, the program’s principal investigator. “We loaded on our staff and we’ve been going from school to school in Duplin County, and soon hope to be doing that in Jones County come January.”

Laupus Library has been awarded a $75,000 grant through the Institute of Museum and Library Services to provide laptops and health education instruction to the school-aged children of migrant farmworker families in eastern North Carolina.

The library purchased 100 laptops to be distributed this month to middle- and high-school children in Wayne and Pitt counties. Beth Ketterman, Laupus Library director, said laptops were chosen to best meet the needs of these students.

“The shift to remote instruction upended education in the greatest of ways,” said Ketterman. “Providing a device that is not just loaned but given to a student who has the added challenge of potentially moving during the pandemic means they can have a consistency in access to their learning materials.”

The project dovetails a previous grant coordinated by Dr. Joseph Lee, from the Department of Health Education and Promotion in the College of Health and Human Performance, which provided hotspot internet connectivity for these same migrant communities.

Ketterman said that after she saw the funding announcement she approached Lee about partnering on an application.

“We brainstormed around the idea of deploying devices that include quality health information and health literacy instruction since that was a need that hadn’t yet been met in his existing grants,” Ketterman said. “Then once we started talking with the partners and then the area schools, it became clear that this project had a lot of support.”

The grant was awarded under the provisions of the federal Library Services and Technology Act as administered by the State Library of North Carolina, a division of the Department of Natural and Cultural Resources (IMLS grant number LS-246155-OLS-20).

According to Lee, his work on the National Library of Medicine Health Disparities Resource Grant includes an advisory board and community partners.

“We were able to leverage those connections to quickly turn around an application to get resources for students from farmworker families in eastern North Carolina,” Lee said.

Lee brought on board other vital partners from the Student Action with Farmworkers and the N.C. Department of Public Instruction’s Migrant Education Program (MEP) who worked to help place the laptops with students with the greatest needs and provide guidance for health information seeking instructional modules.

According to the grant application and completed pilot studies, migrant students who move across the agricultural season are among the most vulnerable in the education system. With schools transitioned to online learning, students without access to internet and technology are quickly falling behind.

Lee said students receiving laptops are participants in MEP, which helps coordinate the education of students who move during the agricultural season.

Laupus Library staff developed the educational component of the laptop project to provide MEP staff and English as a second language teachers in Lenoir, Greene, Wayne and Pitt counties with instruction on how to find reputable health information online.

“Each laptop comes with a backpack, headphone/microphone headset and two USB drives, one loaded with the WiderNet Pocket Library, a customized pocket library of health information sources,” said Roger Russell, Laupus Library associate director, who was the co-principal investigator on the project with Mary Roby, assistant director of user services.

“Even in the midst of a global pandemic, arguably the worst time to connect with anyone, we have connected with so many people working within our eastern North Carolina schools through programs like MEP and English as a Second Language (ESL) who are incredibly grateful for this project and what it offers,” Russell added.