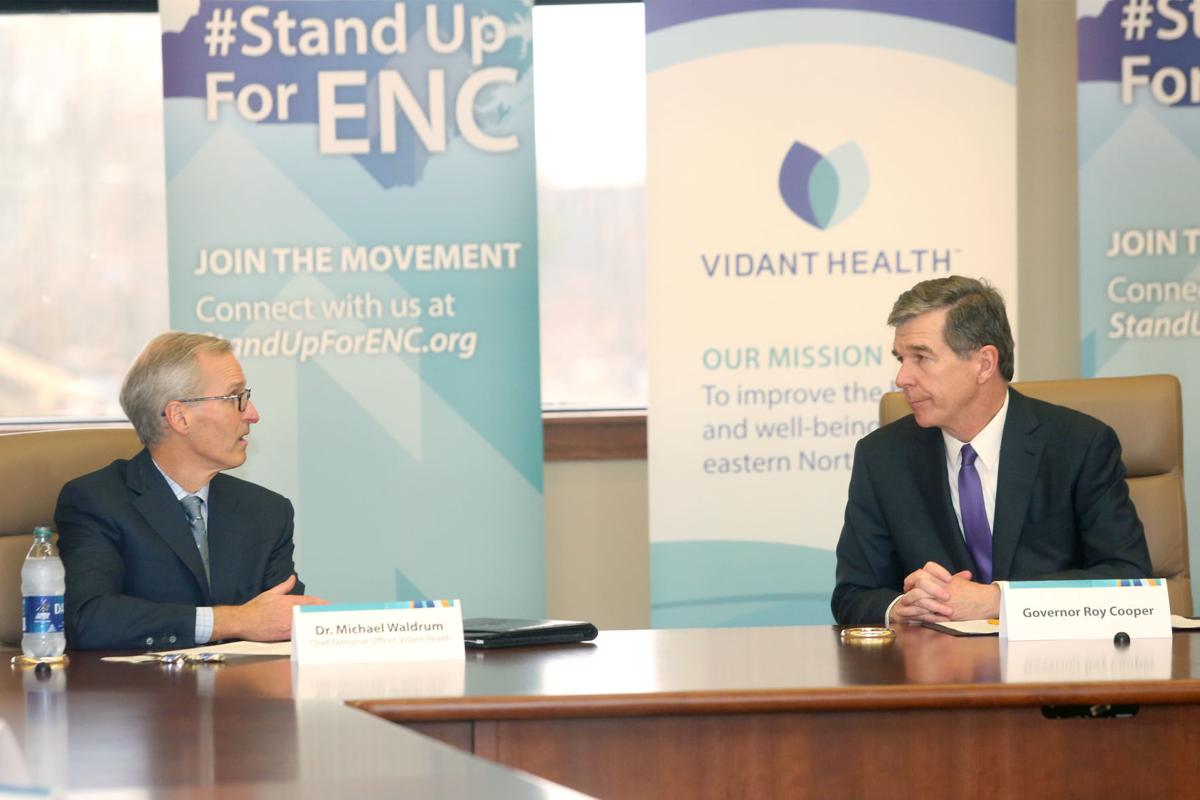 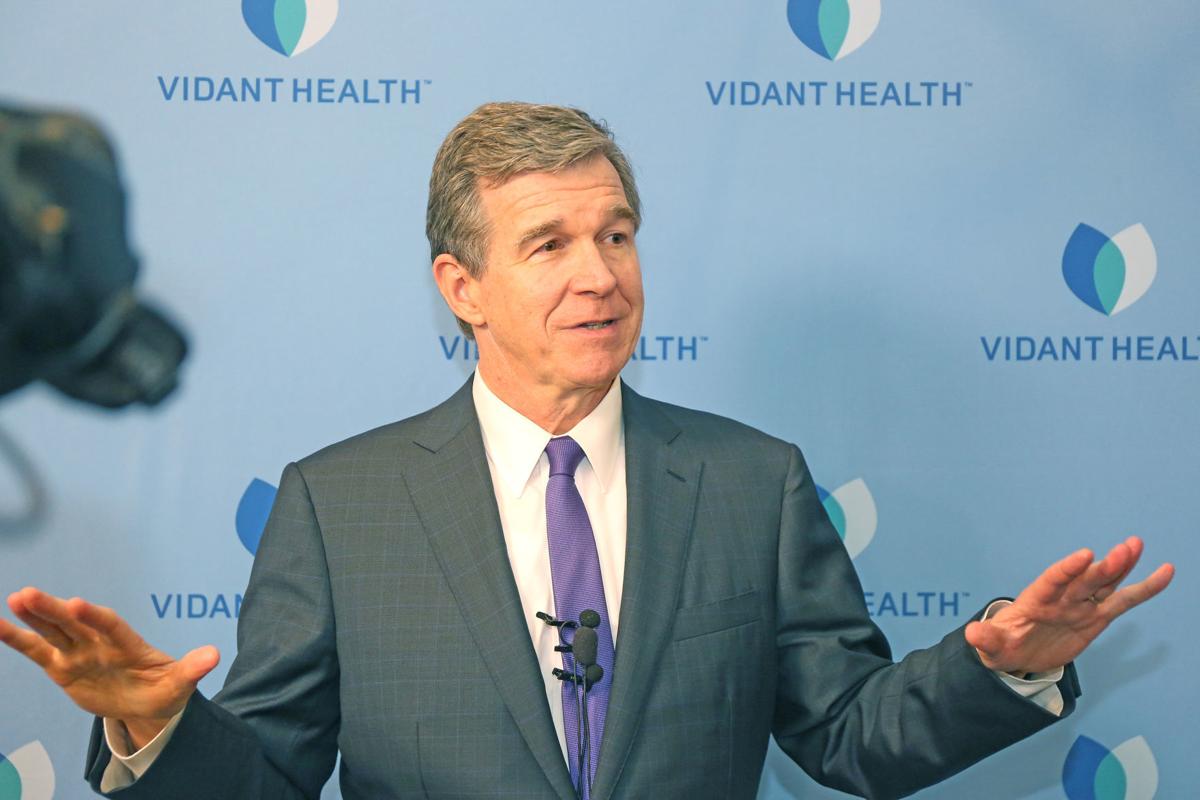 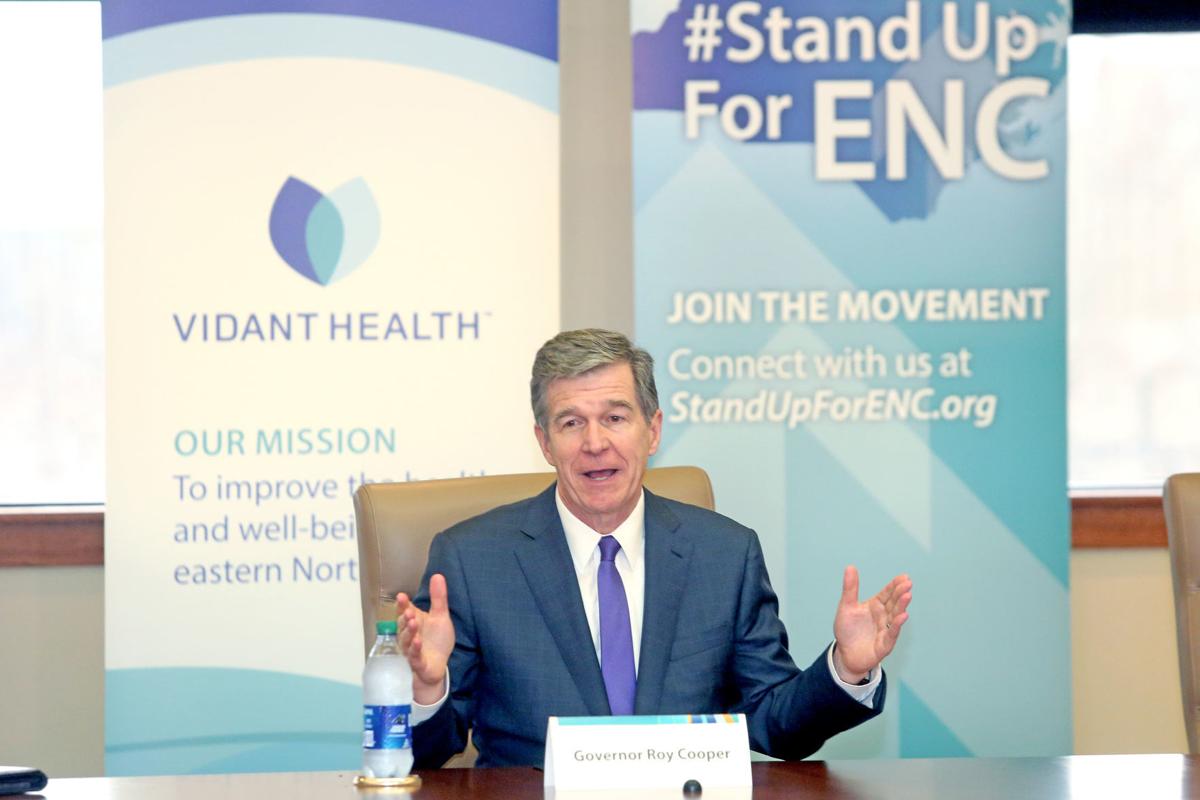 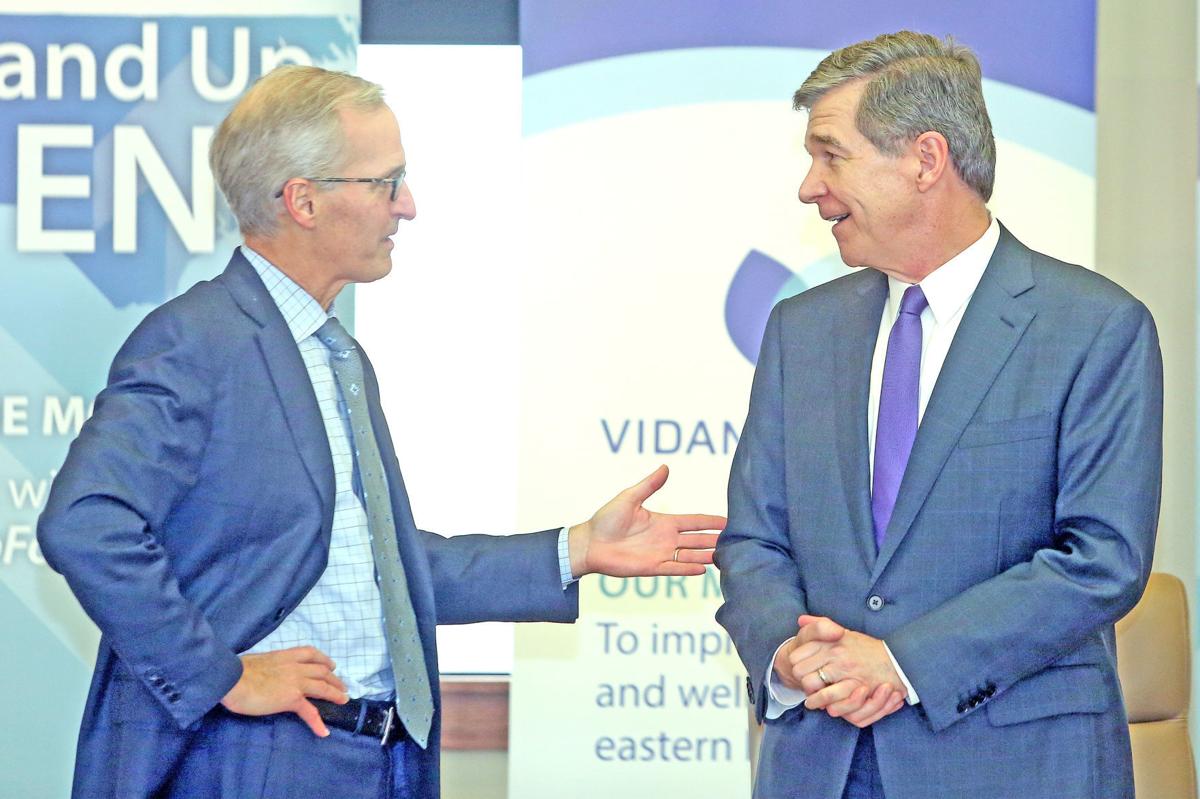 Gov. Roy Cooper talks with Vidant Health’s Chief Executive Officer Dr. Michael Waldrum during a meeting on Monday to promoted Medicaid expansion. At right, Cooper discusses the benefits of Medicaid expansion. It is time for North Carolina to reclaim the taxes they have paid to the federal government by receiving federal spending for Medicaid, he said.

Gov. Roy Cooper talks with Vidant Health’s Chief Executive Officer Dr. Michael Waldrum during a meeting on Monday to promoted Medicaid expansion. At right, Cooper discusses the benefits of Medicaid expansion. It is time for North Carolina to reclaim the taxes they have paid to the federal government by receiving federal spending for Medicaid, he said.

Nearly a dozen officials from Vidant Health, the business community and elected leaders joined Gov. Roy Cooper to talk about the need for Medicaid expansion on Monday.

The General Assembly is scheduled to reconvene at noon today, so the governor and secretary of Health and Human Services, Dr. Mandy Cohen, came to Greenville to keep the public’s attention focused on negotiating an expansion deal.

Looking at longevity data, Waldrum said, it is clear that people who live in the Raleigh area live more than a decade longer than individuals who live 100 miles east along U.S. 64.

Multiple rural hospitals in the state are at risk of closing because they are saddled with large populations that can’t pay for health insurance, Cooper said. There also are numerous families struggling with bankruptcy after incurring large health care bills after an illness.

It is time North Carolinians reclaim the taxes they have paid the federal government by receiving federal spending for Medicaid expansion, he said.

“We’ve seen a laboratory of the 37, now 38, states and we’ve seen how it works for a number of years,” Cooper said. “We saw a 7 (percent) to 11 percent drop of insurance premiums for private companies with expansion in these other states.”

Reducing the amount of uncompensated care should reduce costs across the board, he said. States with expansion also saw decreases in opioid abuse deaths, Cooper said.

“We need to find a path for reasonable people to close their coverage gap,” Cooper said.

“This is a really hard health care market where people have been underserved historically,” Waldum said. “It’s important that we do close this gap. It’s important for all people in eastern North Carolina to have coverage.”

More than one million people in North Carolina do not have health insurance, according to a statement later released by Vidant Health.

The statement also said that the Center for Health Policy Research at George Washington University reports that expanding Medicaid for the state would result in more than $11 billion in additional federal funding from 2020-22, with more than 600,000 North Carolinians becoming eligible for Medicaid coverage.

Cooper vetoed the $24 billion state budget because it did not contain Medicaid expansion. The House overrode the veto but the Senate’s Republican leadership needs one Democrat to pass an override vote.

The legislature’s Republican leadership have said Medicaid should be negotiated separately from the budget and the budget should be approved before expansion talks begin.

“I am here to learn about health care in rural North Carolina,” Humphrey said.

Humphrey, who represents Lenoir County and part of Pitt County, is an insurance agent and has clients who are farmers and small business owners who struggle to afford health insurance.

However, his office has received few comments from individuals who want Medicaid expansion. Most people are more concerned about affording their utilities, he said.

Humphrey said he would relay Monday’s comments to the Senate but called the body a “tough, tough sell.”

The House is more open to pursuing some form of Medicaid expansion, he said. There is legislation in committee that would expand Medicaid but it has a work requirement, as do several states that receive federal expansion dollars.

Humphrey also thinks people should pay a small premium, maybe 2 percent, to cover administration costs, and there should be a wellness requirement.

“We can’t give you health care and expect you to eat four cheeseburgers a day and drink a 12-pack of beer every night. You’ve got to have skin in the game,” Humphrey said.

If the state approves Medicaid expansion, it must pay 10 percent of the cost. Cooper said Cohen and others in his administration have secured an agreement that insurers, hospitals and providers will pay that 10 percent match.

When I became governor I had a CEO mission statement ... That mission is to make sure we have a North Carolina where people are better educated, where they are healthier, where they have more money in their pockets and they have opportunities to live lives of purpose and abundance,” Cooper said. “The issue we are talking about here today will further that mission.”

Subscribers can visit reflector.com to read additional comments about funding a new Brody School of Medicine.