Get Started
You are the owner of this article.
Edit Article Add New Article
You have permission to edit this article.
Edit
News
Opinion
Sports
Features
Obits
Multimedia
Classifieds
e-Edition
Our Sites
Extras
Share This 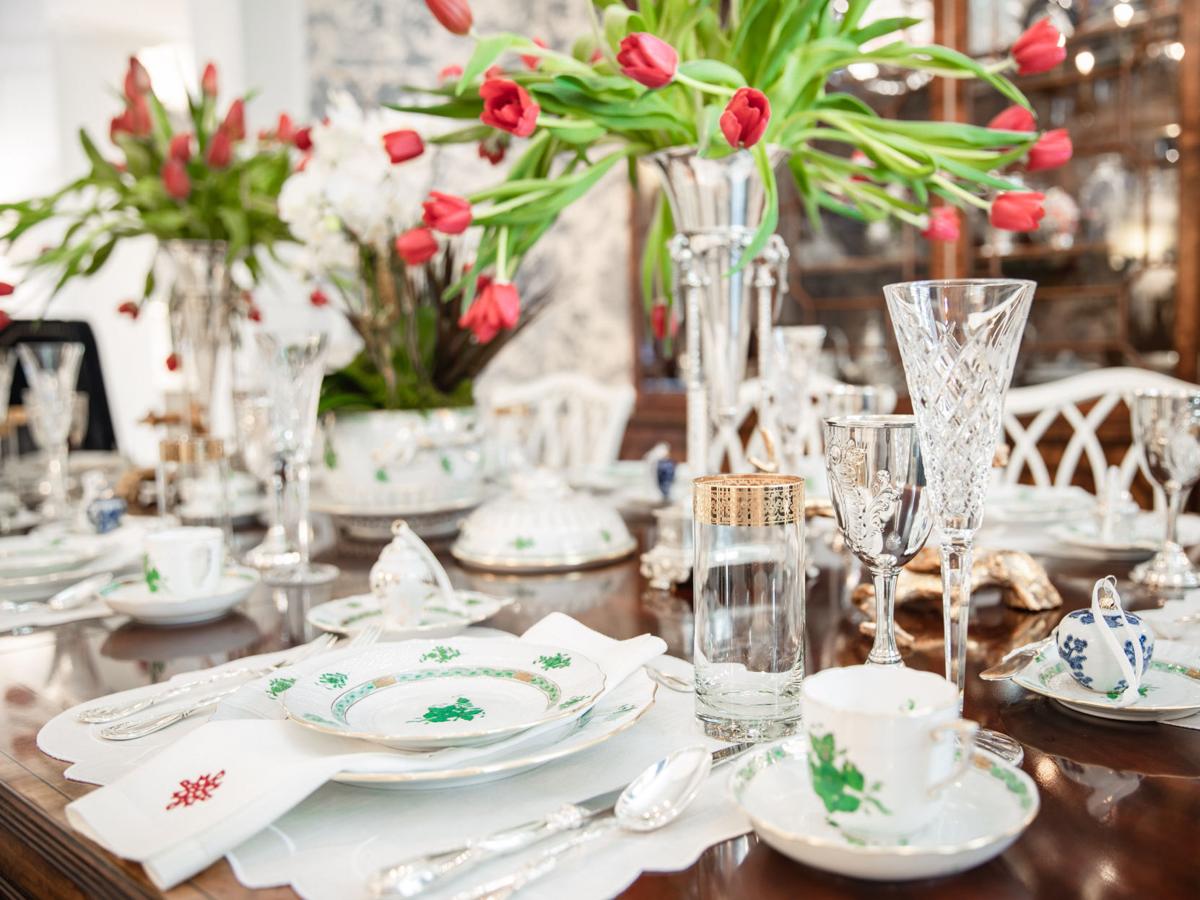 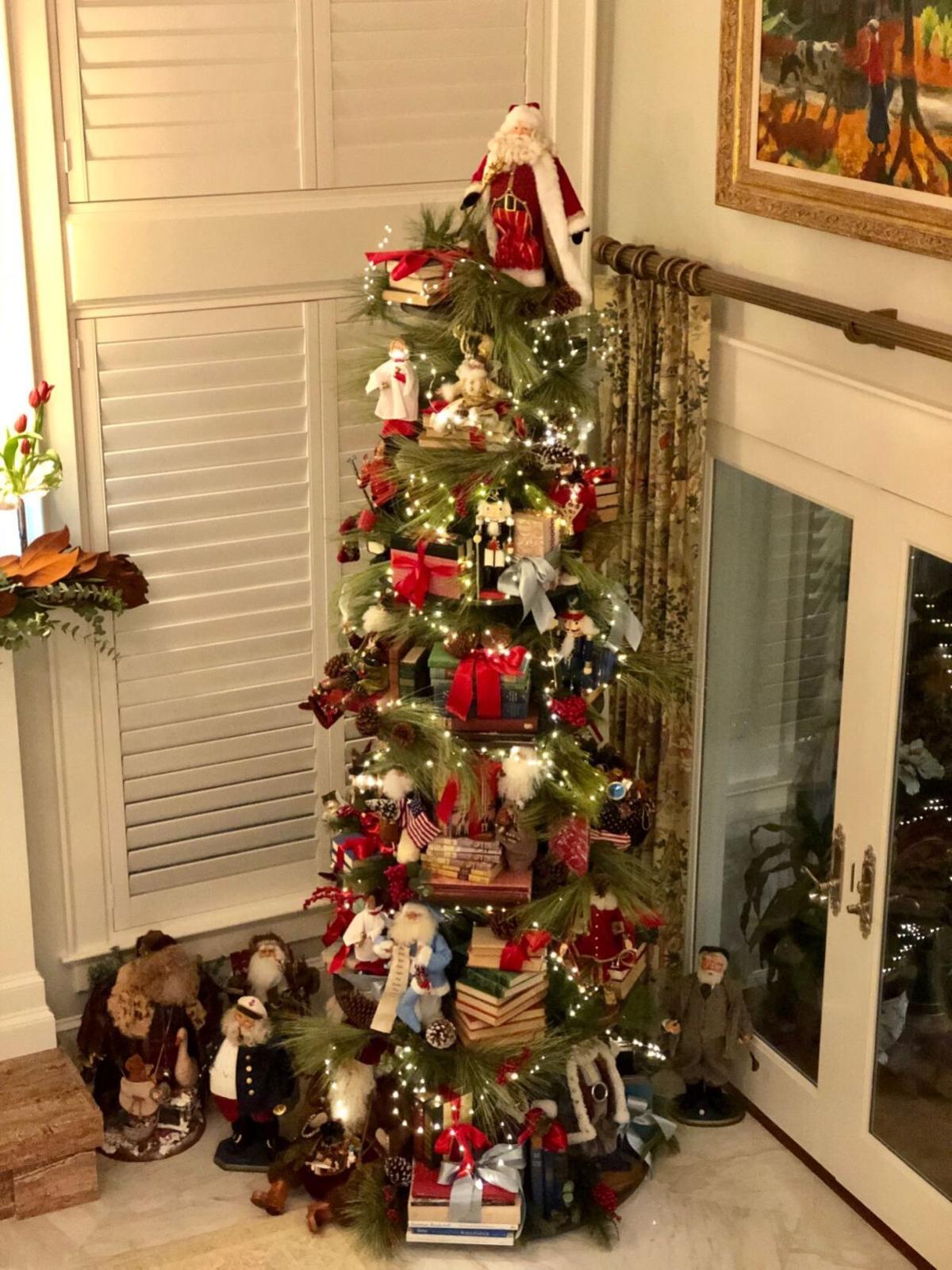 Designer Joey Gibson created this book tree for the library of Tracey and Henry Smith’s home near Fountain. 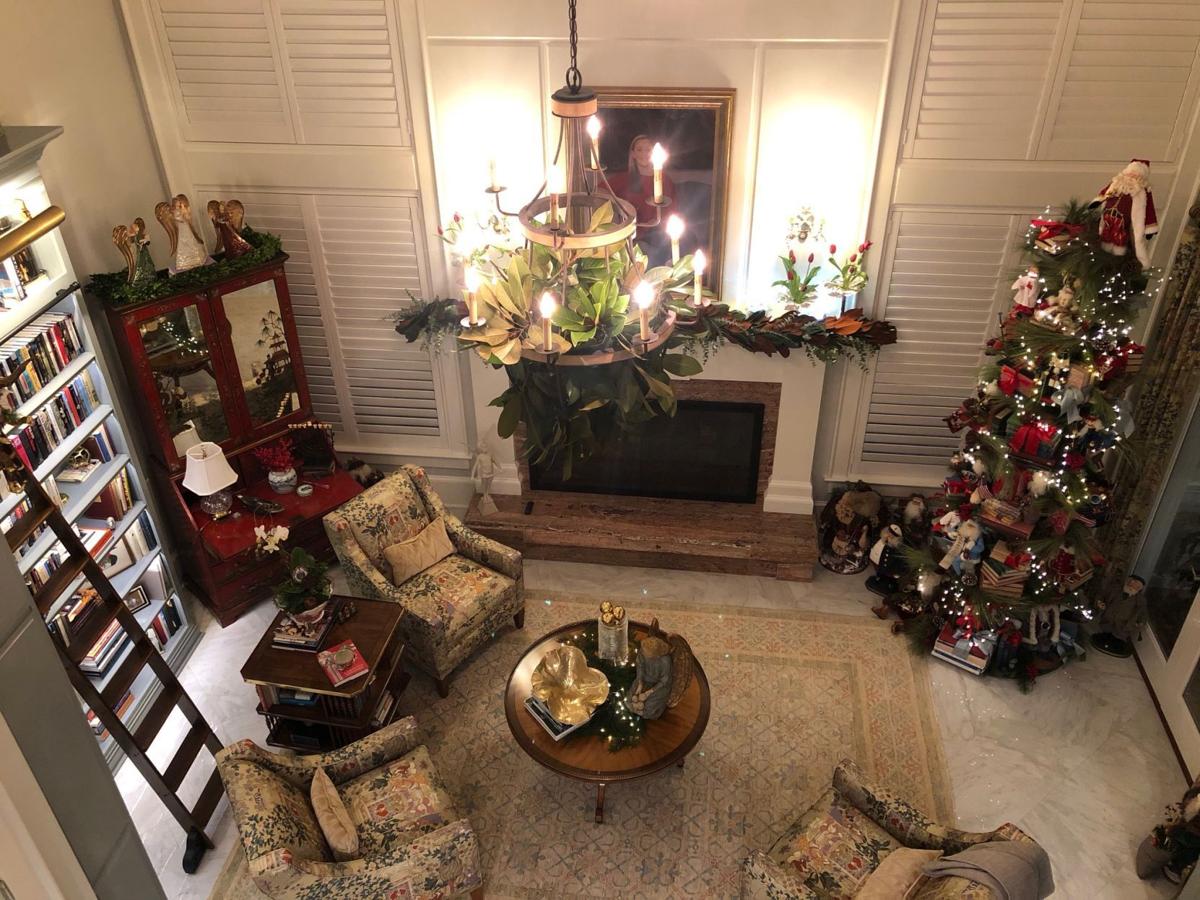 The library of Tracey and Henry Smith’s home near Fountain, which is featured on this year’s virtual St. Paul Christmas homes tour. 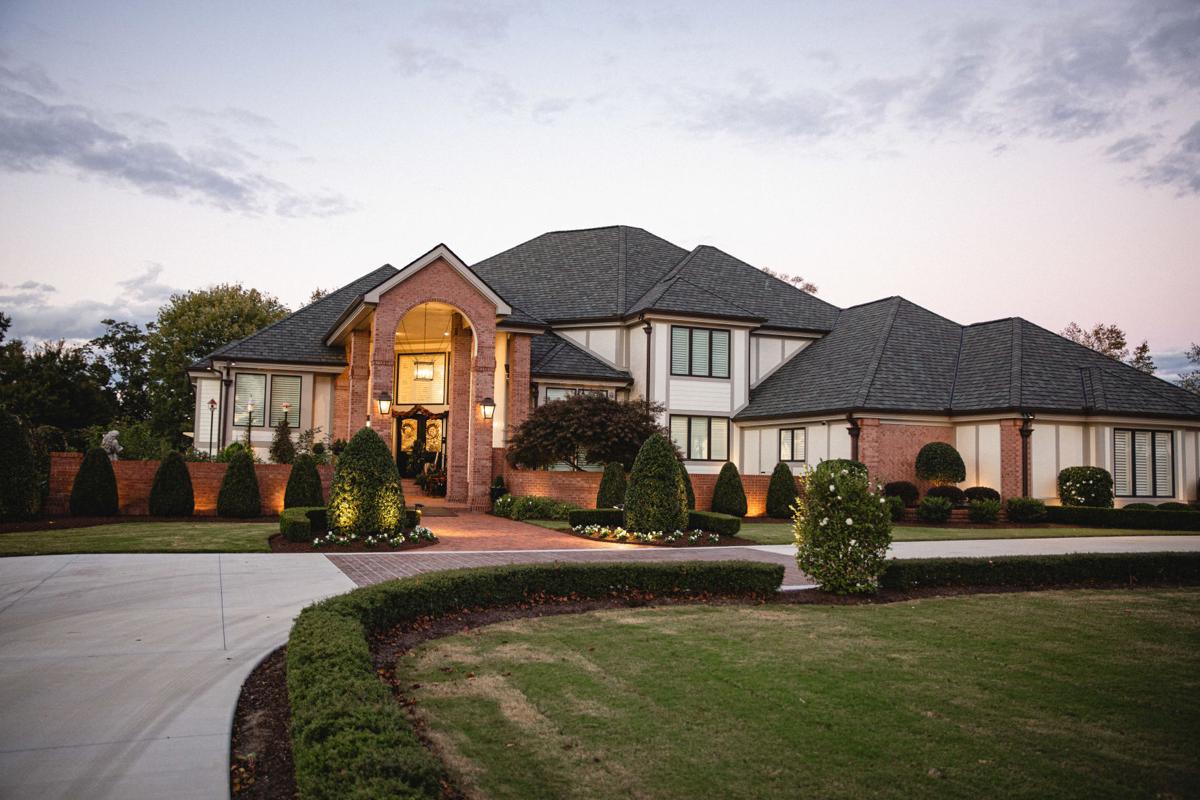 The home of Tracey and Henry Smith of Fountain is one of four featured on this year’s virtual St. Paul Christmas homes tour.

Designer Joey Gibson created this book tree for the library of Tracey and Henry Smith’s home near Fountain.

The library of Tracey and Henry Smith’s home near Fountain, which is featured on this year’s virtual St. Paul Christmas homes tour.

The home of Tracey and Henry Smith of Fountain is one of four featured on this year’s virtual St. Paul Christmas homes tour.

For nearly two decades, the St. Paul Christmas tour has allowed people to step inside festively decorated Greenville homes for the holidays. But in a year in which COVID-19 has put limits on such gatherings, organizers have found a way to let ticketholders view those houses without having to leave theirs.

Scheduled for Dec. 5, this year’s tour, a fundraiser for Community Crossroads Center, will be a virtual one. But in many ways, it will follow a tradition that began 19 years ago.

“We just didn’t want to break the cycle,” said Judy Whichard, who co-chairs this year’s event, along with Missy Goldstein. “Christmas is going to be different this year for everyone anyway. We thought if we can’t do it where everybody gets together and has a fun day out and about, maybe in their own little bubble they could get together and enjoy this in their own homes.”

Filming began in early fall, when Whichard accompanied videographer Zachary Pomeroy of La Flecha Film Co. for hours of shoots at featured homes. Before some people had a chance to decorate their porches with pumpkins, these hosts were busy decking the halls. In many cases, that meant the tree had to be an artificial one.

“Christmas trees were not even on the market then,” Whichard said. “We had to ask the homeowners to be ready to decorate by the beginning of October, which was incredible to ask people to do.”

This year’s tour includes four homes, about half the number featured in a typical year. Whichard said fewer were chosen in order to keep the video to about an hour’s length.

One of the benefits to the video format, she said, is that the tour has been able to extend its reach to include homes that might have been considered too much of a drive for tour participants in previous years. In addition to the Greenville homes of Caroline and Tom Luvender and Cindy Mills and Manny Zervos, the tour includes destinations in Fountain and Washington, N.C.

Catherine and Charles Young’s home, which is located near where the Tar and Pamlico rivers converge, is about 30 minutes from Greenville, but virtual visitors will be able to make the journey in seconds. Whichard said the Youngs, who are members of St. Paul’s, had wanted to be on the tour before now.

“But they knew that they couldn’t because they were so far away,” she said. “This gave them the opportunity to give back to the church and to give back to Crossroads (where Charles serves as operations manager).”

About 25 minutes on the other side of Greenville is the home of Tracey and Henry Smith, located near Kings Crossroads outside of Fountain.

The multi-level design of the home, which was built in 1990, is an unusual one for eastern North Carolina, where few people have basements. To help the Smiths and their guests navigate the various levels, designer Joey Gibson had an elevator installed when she oversaw an extensive renovation in 2016.

Built by Ollie Harrington, the home is located on property that has been in the Smith family for years. Both the builder and Gibson took care to incorporate items from the farm into the home’s design.

Wood from an old tobacco pack house was repurposed for the ceiling in the game room and mantle in the family room, and bricks from another structure on the property were part of the original construction.

“There are some sort of historic and definitely sentimental things we tried to use,” Gibson said. “The bricks they did 30 years ago … but the wood we reclaimed and used in this revamp in 2016.”

The renovation also included converting a little-used living room into a library, complete with 10-foot tall bookshelves and a library ladder.

The library is one of the focal points for the video tour, which gives viewers a look at a unique book tree that Gibson designed as a nod to Tracey Smith’s love for reading. In addition to holding some cherished volumes, the tree is a nesting-place of sorts for carolers, nutcrackers and a few pieces from the couple’s collection of Santa Claus figures.

“They collect a lot of Christmas ornaments from travel, from friends,” Gibson said. “(They are) just acquired through the years, so they all have special meanings.”

The red that Gibson added to the Smiths’ blue and white dining room for the holidays does not come from poinsettias but from a flower seldom seen at Christmas.

“I think there are at least 200 red tulips in the dining room,” Gibson said, adding that red is Tracey’s favorite color. “It’s stunning, really.”

An added feature of the video tour is a look at the Smiths’ gardens, which include sculptures by artists David Landis and Lyman Whitaker.

Gibson expects people will be grateful to be able to view the gardens from their warmth of their own homes rather than having to tour them outdoors on the first Saturday in December.

Whichard said another advantage to the virtual format is that viewers from outside Greenville can easily participate.

“We’ve sold tickets to people as far away as Sacramento and Portland,” she said. “It’s kind of like with church and doing videos from church, you get audiences that would not (otherwise) be able to hear the sermon or the music. They can go on your website and actually feel like they’re a part of what’s going on. It brings about some inclusion that you would not have had otherwise.”

Whichard said it is too early to determine whether a video format will continue after this year as a way to attract viewers. But she expects that many people will be eager to attend the 20th annual tour in person.

“People really enjoy this tour,” she said of the event, which draws 400 people or more in a given year. “People who usually are the ticket holders and go on this tour are girlfriends or daughters and mothers. It’s a special day for them.

“I’m so sorry that other people haven’t been able to see these houses in person because they’re fabulous,” Whichard said. “Maybe one day we’ll be able to have them on the tour again. You never know; maybe they’ll invite us back.”

The hourlong St. Paul Episcopal Church Christmas Homes virtual tour will be available for viewing from 9 a.m. to 9 p.m. on Dec. 5. The bazaar and luncheon generally hosted at the church in conjunction with the event are not being held this year due to COVID-19. Virtual tour tickets are $25 and can be purchased at  www.stpaulsepiscopal.com (Christmas Homes Tour Tab) or visit eventbrite.com and type St. Paul's Episcopal in the "search events" field. Call 752-3482. Proceeds will benefit Community Crossroads Center, Greenville’s homeless shelter.

Four homes will be featured in the 19th annual St. Paul’s Episcopal Church Christmas Homes Tour, which will be available for viewing on Dec. 5…