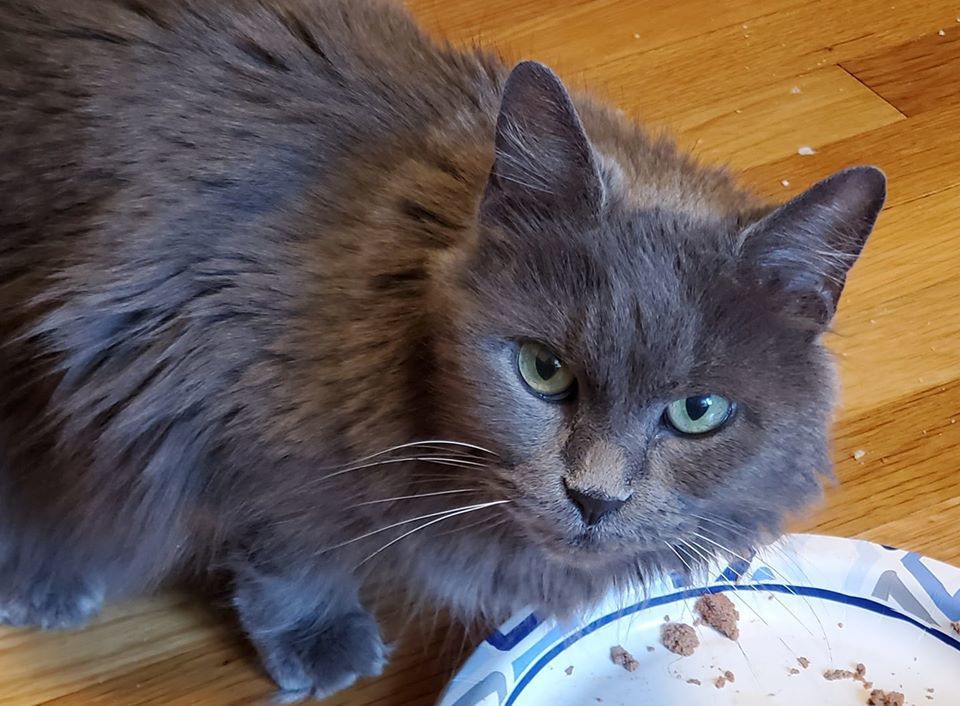 Ash, 15, is being fostered by a volunteer for Saving Graces 4 Felines until the organization can find her a new home. 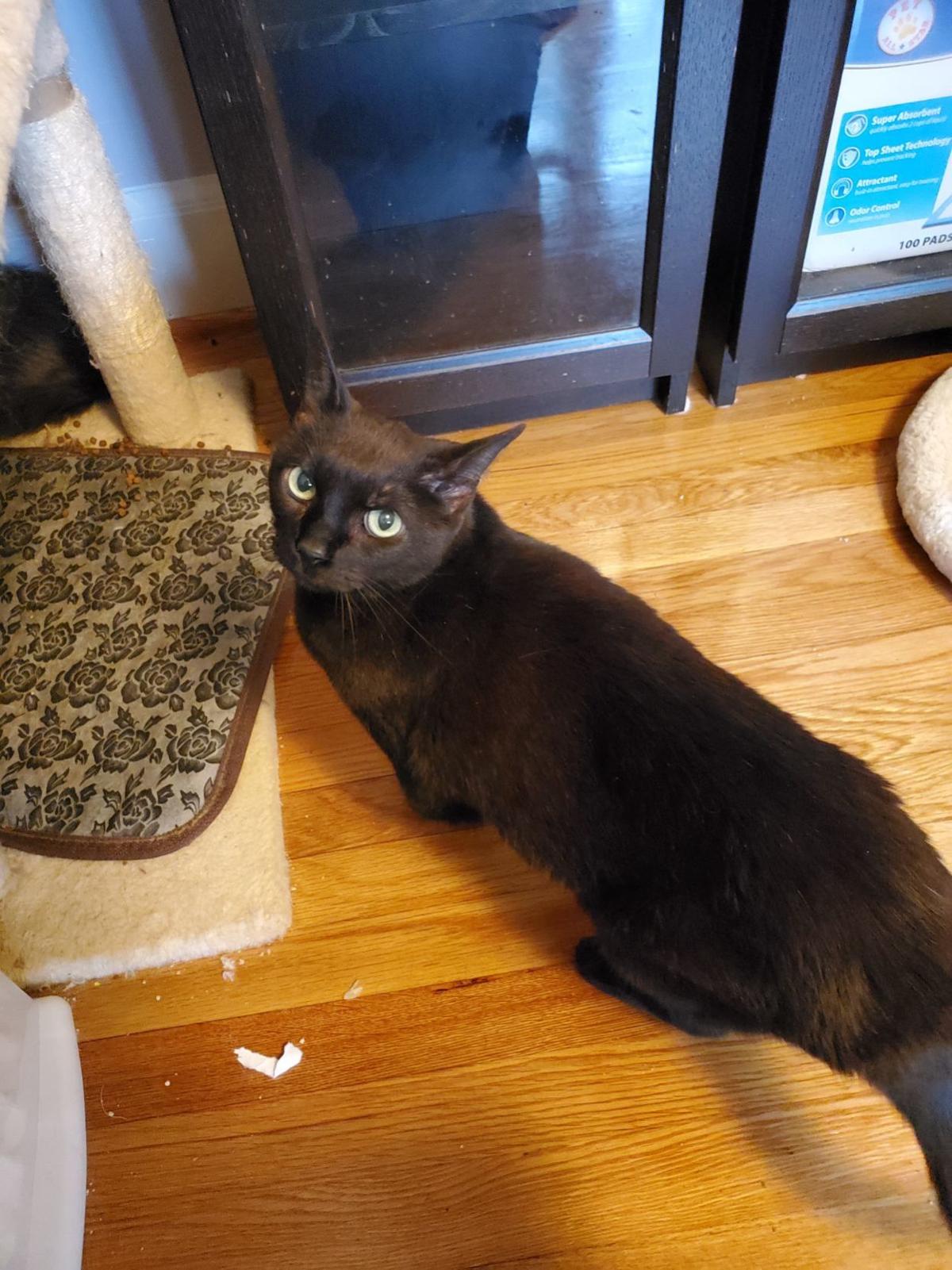 Inky, 13, is one of two cats needing a new home following her owner’s death from COVID-19. Ash, 15, at right also needs a home.

Ash, 15, is being fostered by a volunteer for Saving Graces 4 Felines until the organization can find her a new home.

Inky, 13, is one of two cats needing a new home following her owner’s death from COVID-19. Ash, 15, at right also needs a home.

People who knew Holly Ferrara would attest to the fact that her cats were her life. In two years of volunteering with the rescue group Saving Graces 4 Felines, she adopted three of them. But after their owner’s death from COVID-19, two of those cats are in need of rescue again.

SG4F co-founder Marilyn Thompson said Ferrara’s neighbors, who volunteered to care for her cats while she was hospitalized, have stepped forward to provide homes for two of her four cats. But following the 67-year-old woman’s death on April 19, the nonprofit agency is still looking for homes for Ferrara’s two senior-adult cats.

“It was very obvious from the early days that the elderly cats were going to have a harder transition,” Thompson said. “What we’re trying to appeal to is someone who has a kind heart and will let these cats live out their lives.”

Thompson hopes that fears over reports indicating that pets can become infected with coronavirus will not cause people to be unwilling to adopt them. Some studies have shown that cats can contract the virus and can transmit it to other cats, but there is no documentation of cats transmitting the virus to people.

“We’ve had them four weeks now,” Thompson said. “There’s no risk to anyone for COVID-19 because they’ve been out of the environment, and they’ve been in a foster home.”

Ash, 15, and Inky, 13, are being fostered by Andrea Kitta until a permanent home can be found.

Kitta, an associate professor of English at ECU, is a folklorist specializing in medicine and is author of “The Kiss of Death: Contagion, Contamination and Folklore,” published in October 2019. Her husband, Craig Brown, is a physician.

“We kind of figured we were the best people to take these cats in because we really knew a little bit more about this and we weren’t afraid of them,” Kitta said. “I know, just because there’s so little that we still know right now about this virus, that some people were still nervous. But we were pretty confident that it was going to be fine, and it has been.”

While Kitta and Ferrara never met as volunteers for SG4F, Kitta said she could relate to Ferrara’s apparent affection for her cats. She also saw fostering them as one way she could serve others during the pandemic.

“This is one of the things I could do,” she said. “I can’t sew, so I can’t made masks. I’m not a medical professional, but I can take in these cats.”

As a precaution, Kitta has kept Ash and Inky separated from her other cats. Even without any known risk of COVID-19 transmission between cats, she said she generally separates cats she is fostering from her other cats to give them time to make a transition to their new environment.

Thompson said the cats have adjusted fairly well in spite of the stress of being taken from their home. At first, the oldest cat was hesitant to eat.

“She’s still sad,” Thompson said of the 15-year-old cat. “I don’t know if people realize that pets grieve but it has been a transition for the cats.”

Saving Graces would like to have the cats adopted together if possible but will consider separate homes for the two indoor cats. Due to a donation, the adoption fee has been waived, although an application and veterinary references are required.

While the cats are considered healthy and up-to-date on their vaccinations, Thompson said caring for senior cats, which sometimes require a special diet or additional veterinary care, can be expensive.

Due to the pandemic and restrictions on public gatherings, SG4F and other animal advocacy groups have been less visible in recent months. Adoption events at local pet supply stores have been canceled for several weeks, and groups are having to rely on social media to promote pets for adoption.

Thompson, who had known Ferrara for several years, feels a personal responsibility to see to it that her cats find a new home.

“She called them her girls,” Thompson said. “I want people to know what a great person she was. ...This is important to me.”

Thompson said her friend’s death also serves as a reminder that people should have a plan in place that identifies family members or friends who will care for their pets if the pet owners become ill.

“I knew her (Ferrara) well enough to know she would have never left them (if she had a choice),” Thompson said. “Finding those cats their forever home is something that will allow us to bring this full circle.”

Visit savinggraces4felines.or to complete an adoption application or for more information.