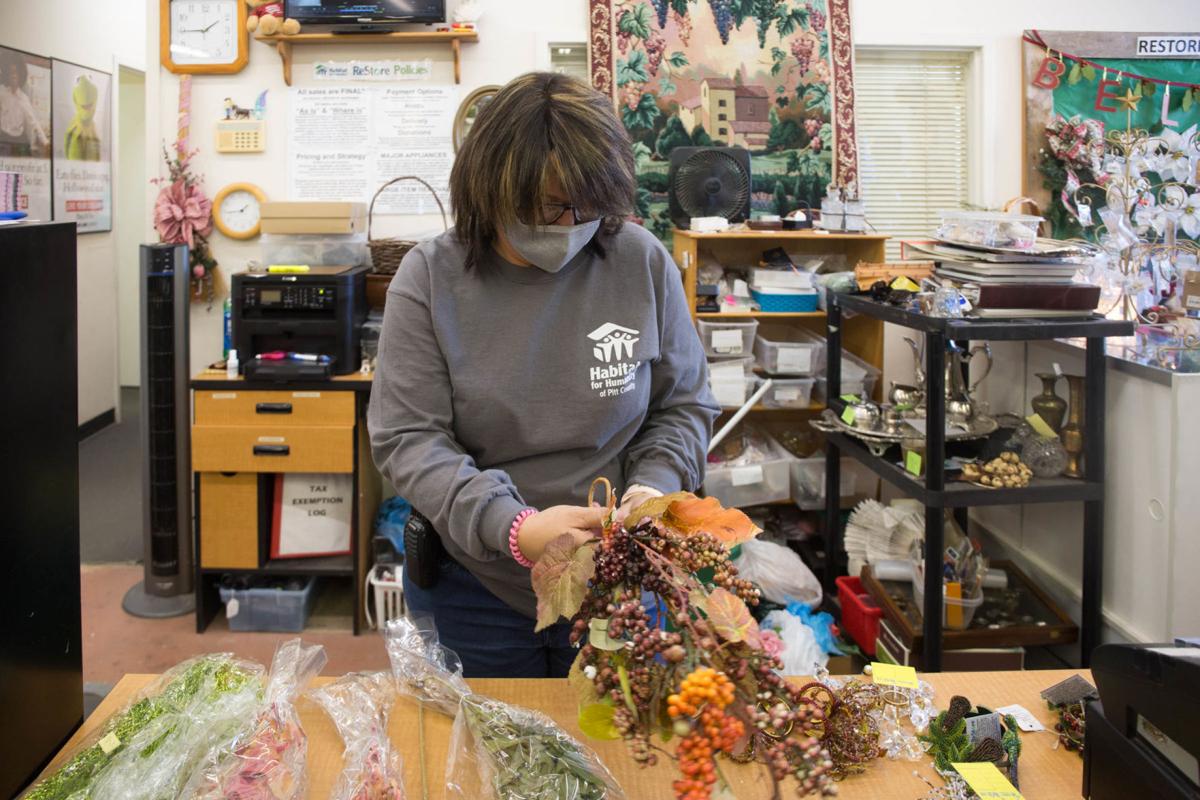 A Habitat for Humanity ReStore employee sorts products on Friday. The ReStore, which has been located in a rented building on 14th Street since 2007, will move to a new location in the spring of 2022. 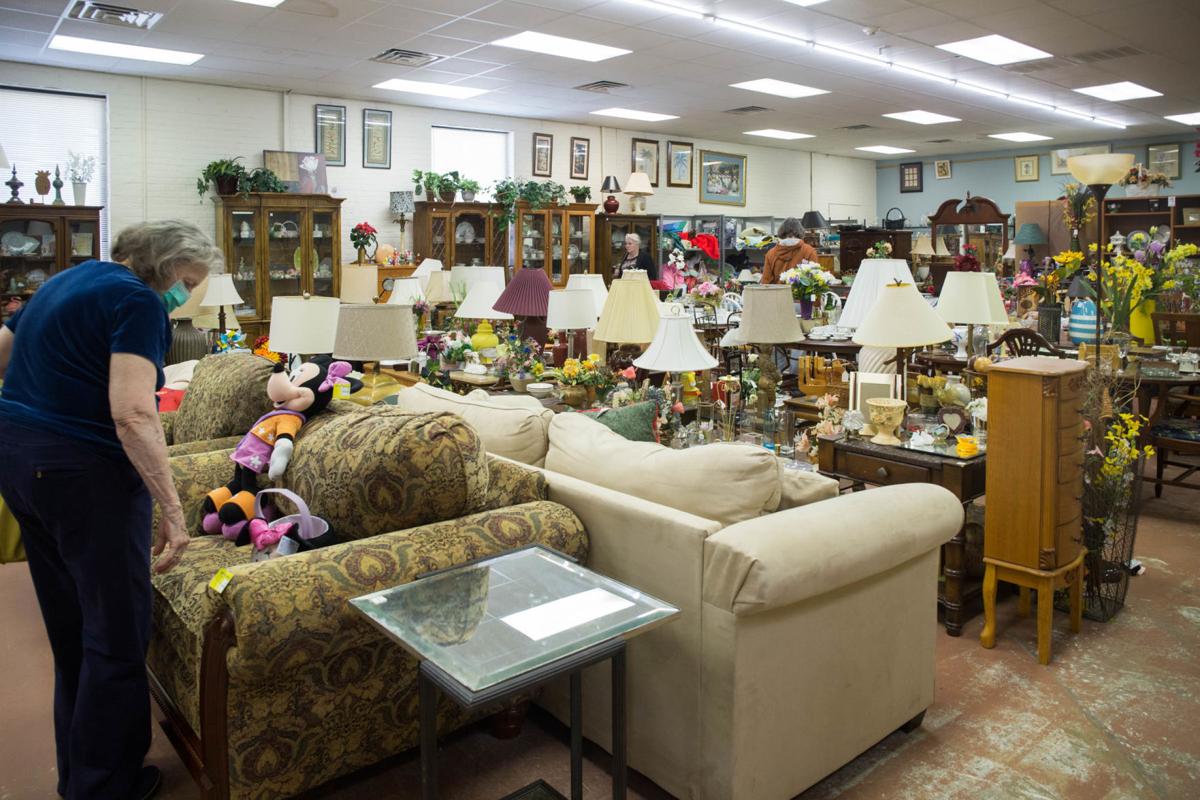 Customers shop at the Habitat for Humanity of Pitt County ReStore on Friday. Proceeds from the store fund all administrative costs for the nonprofit organization so that donations can go directly to funding home-building projects. 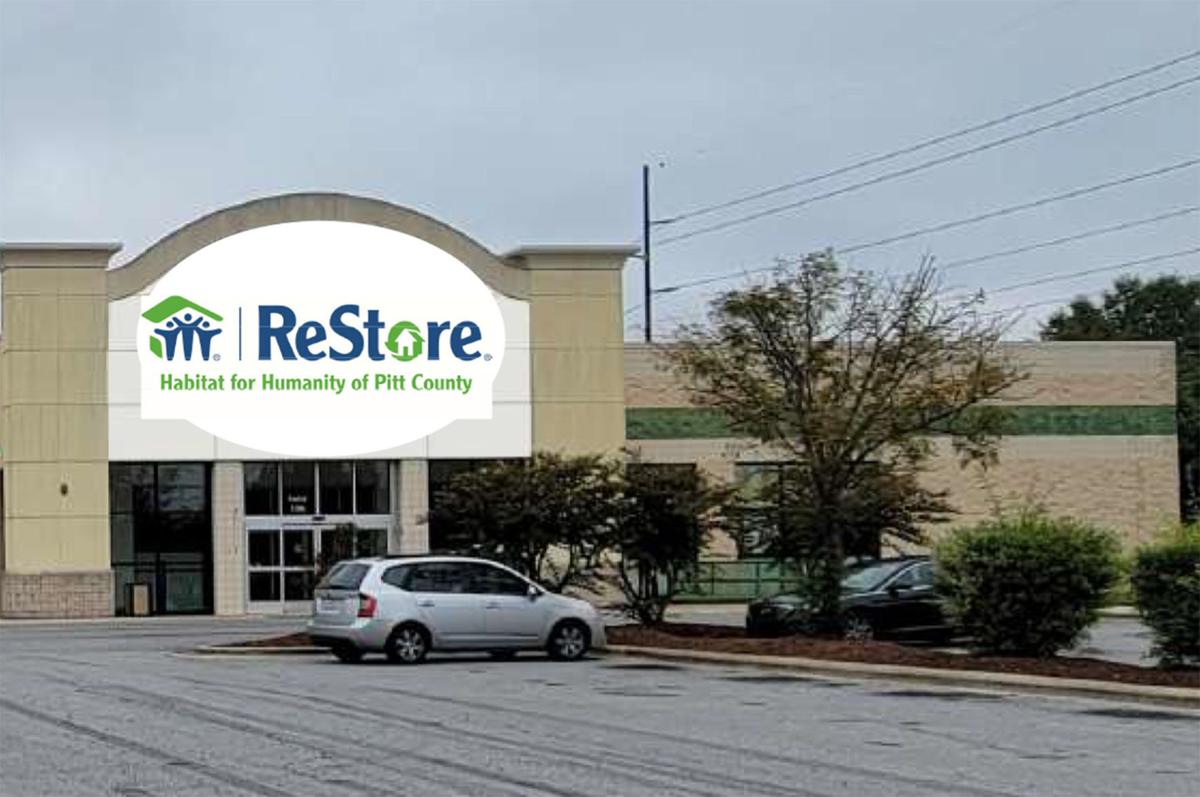 Habitat is purchasing a $1.4 million property on Greenville Boulevard. The nonprofit plans to move its headquarters by the spring of 2022. 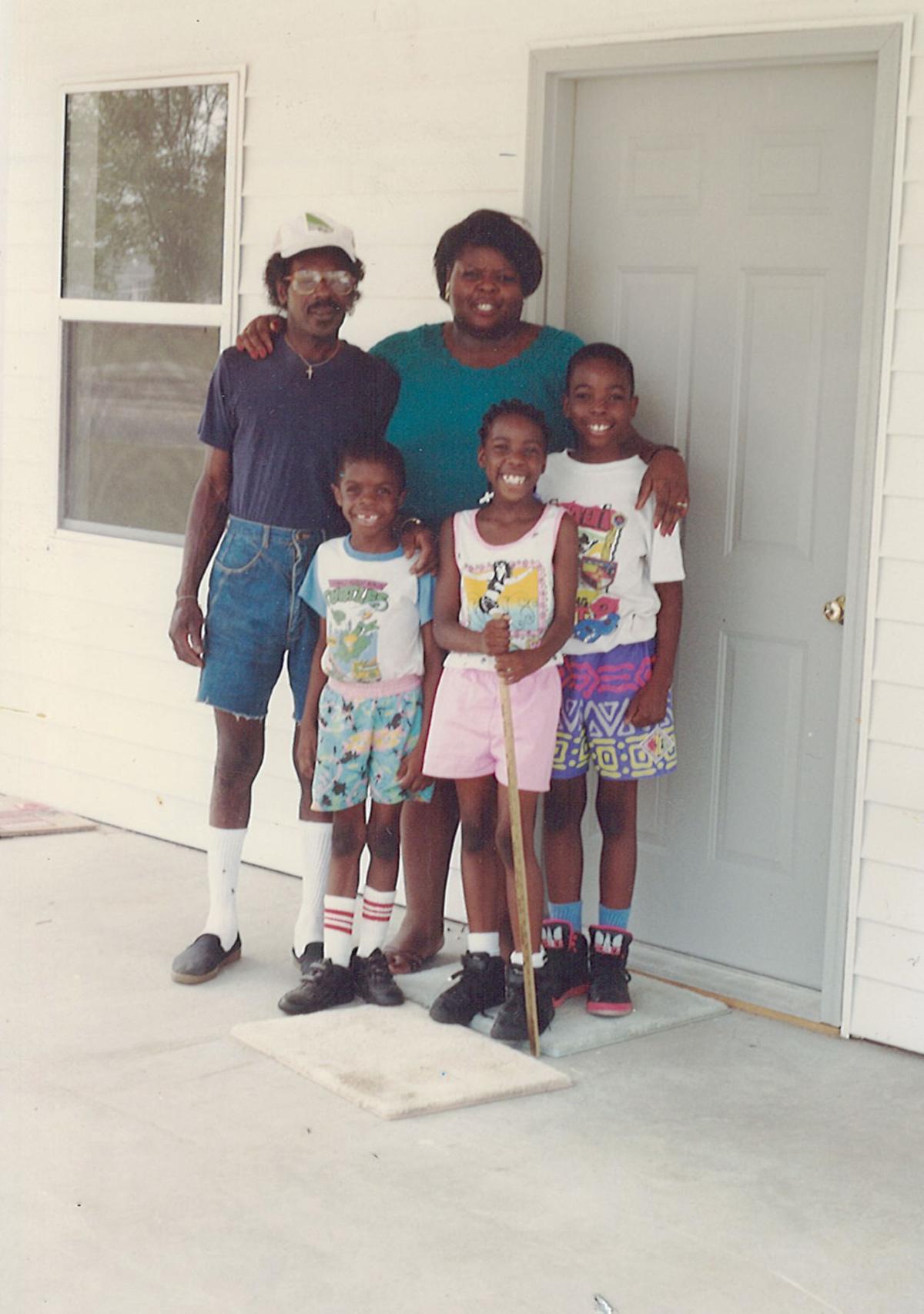 Habitat for Humanity of Pitt County’s first client was Chester Newton. He moved into a home on South Pitt Street with his wife and three children in 1991.

A Habitat for Humanity ReStore employee sorts products on Friday. The ReStore, which has been located in a rented building on 14th Street since 2007, will move to a new location in the spring of 2022.

Customers shop at the Habitat for Humanity of Pitt County ReStore on Friday. Proceeds from the store fund all administrative costs for the nonprofit organization so that donations can go directly to funding home-building projects.

Habitat is purchasing a $1.4 million property on Greenville Boulevard. The nonprofit plans to move its headquarters by the spring of 2022.

Habitat for Humanity of Pitt County’s first client was Chester Newton. He moved into a home on South Pitt Street with his wife and three children in 1991.

After nearly 15 years of renting, an organization that promotes home ownership is finally getting a home of its own.

Habitat for Humanity of Pitt County, which since 2007 has rented space on 14th Street for its offices and retail store, is purchasing a $1.4 million property on Greenville Boulevard. The nonprofit plans to move its headquarters to 146 S.W. Greenville Blvd., the former Goody’s store location, by the spring of 2022.

“We really took a leap of faith,” Executive Director Scott Johnson said. “We’re going to have a mortgage for a while, but hopefully, over time, we’re going to own our own building.

“For years we’ve talked about the importance of owning a home vs. renting a home,” he said, “and, for the first time, we’re actually kind of putting our money where our mouth is.”

Some might question what took so long. The local affiliate of the 45-year-old international Christian organization has been in operation since 1991, long enough to pay off a 30-year mortgage. But Habitat has used that time to build 77 houses, helping 81 families realize the dream of home ownership.

Chester Newton was the first, moving into a home on South Pitt Street with his wife and three children on Oct. 22, 1991. Last month, the local Habitat recognized Newton as part of a circumspect celebration of three decades of service in Pitt County.

There was equally little fanfare on the 20th and 25th anniversaries, which each came as the community was facing challenges. In the aftermath of hurricanes Irene and Matthew the organization did not deem it appropriate to call attention to itself, choosing rather to look for ways to join recovery efforts.

“We’re not a disaster organization, but we opened the back part of our store and accepted donated goods,” Johnson said of Habitat’s decision to act as a distribution center for food and toiletries for families affected by the hurricanes. “We distributed it for months afterward just because it was the right thing to do.”

‘Too good to be true’

It was a hurricane that first brought Delphia Hollis to Habitat. Hurricane Floyd flooded her mobile home on Mumford Road in 1999, and families were prohibited from moving back to the area. She wasn’t sure where to turn until she saw a flyer for Habitat for Humanity.

“I have heard of it, but I did not personally know about it here in Greenville,” she said. “I said, ‘This sounds too good to be true.’”

Habitat homeowners only pay for what it costs to build a house, and the organization finances the mortgage loan interest-free. Homeowners also are required to contribute what is known as “sweat equity,” spending hundreds of hours helping volunteers work on their home or other Habitat houses under construction.

“I worked on my home from day one,” Hollis said. “I learned to put in those nails from the foundation to the ending. I encouraged them, but they really encouraged me.”

Homeowner Terrence Clemons needed little coaching to be able to contribute to the Habitat building effort. He had grown up helping his stepfather work in construction. When his home was being built in 2009, Clemons worked nearly double the number of sweat equity hours required, helping to build a home for a single mother whose child has autism.

But getting to work on his own home was an answer to prayer. Clemons, who began working as a sexton at First Presbyterian Church when he was released from prison, had a wife and four children to support. The six of them shared a three-bedroom apartment until the church introduced Clemons to Habitat.

“At that time the landlord was going up on the rent,” he said. “That would have been over half my income. It would have made it very difficult.”

Johnson, who began leading the local Habitat in 2016, said many homeowners tell similar stories. He recalls a first-time homebuyer who was 62 years old and had been renting the same house for 35 years.

“Some people would say, ‘Well, she’s going to still have a mortgage at 82 or 83 years old,” he said. “The difference is if she hadn’t found Habitat and we hadn’t partnered together, she’d have had a rent payment at 82 years old.

“Now she’ll pay off her home and she’ll have an appreciable asset that when she passes away she can pass on to her children and her grandchildren,” he said. “That’s a game changer for generations to come.”

Johnson recalls hearing a mother who had lived with her children in a two-bedroom trailer say she was looking forward to not having to buy air mattresses. For the first time, her children would have bedrooms where they could sleep.

“That’s the story of so many people, that are good people that just haven’t had the great breaks that others have had,” he said. “That just need that opportunity to pull themselves up a little bit more to a standpoint of being able to actually have a mortgage.

The program provided both for Hollis, whose husband had died a year before her home was flooded, leaving her to start over with her daughter and infant grandchild.

“I always thank God for Habitat,” she said. “I don’t know what I would have done. The little bit that I had after my husband died, I had to pay rent from that. I could have been homeless.”

Instead, she was able to spend the holidays in her new home, which was dedicated Nov. 18, 2000, a little more than a year after Hurricane Floyd.

As Habitat for Humanity of Pitt County’s 30-year anniversary approached, the community was dealing with a different kind of storm. Habitat completed two homes in February 2020 but did not dedicate another one until September 2021 due to the coronavirus pandemic.

“There were almost no volunteer opportunities on that last house because of the COVID scare,” Johnson said. “Habitat international strongly discouraged any volunteers on home-building sites for almost a year and a half.”

In addition to shortages of both volunteers and skilled laborers, the organization encountered skyrocketing materials costs and supply-chain issues. At the same time, Habitat was unable in 2020 or 2021 to host its signature barbecue dinner sales, events that were anticipated to have brought in some $30,000.

But not all the developments were negative ones. Johnson saw an increase in donations of items to Habitat’s ReStore, which funds all the organization’s administrative costs so that other financial contributions can be dedicated exclusively to building projects.

This year also saw the retirement of Hollis’ debt. She is one of about 25 homeowners who have paid their entire mortgage balance to the local habitat affiliate.

Hollis, who works in home health as a certified nursing assistant, was due to have made her last installment in 2020. But she had fallen behind and was able to complete it by March 2021.

“I did run into some struggles, but thank God I made it,” she said. “I was just determined. God blessed me to get it and I was determined that I was going to pay for it.”

Habitat hopes to launch its next building project in February 2022. The west Greenville home, which should take about six months to complete, is the only Habitat home slated for construction next year.

The organization is launching a capital campaign to fund its new headquarters, which is expected to cost $2 million, including renovations. Once that project is fully funded, Johnson said, Habitat will be able to build an additional home each year.

“Our rent payment (annually) right now is about the equivalent to what it would cost us to build a house,” he said. “The quicker I can pay off that building, the quicker I can take those same funds that were going into building rent, and they can go directly into mission work.

“Not only are we going to talk about that to low-income families that need affordable housing and need a decent place to live, we’re going to do that ourselves,” Johnson said. “So that we’re investing in ourselves for the long run.”

For more information about Habitat for Humanity of Pitt County, visit habitatpittco.org.