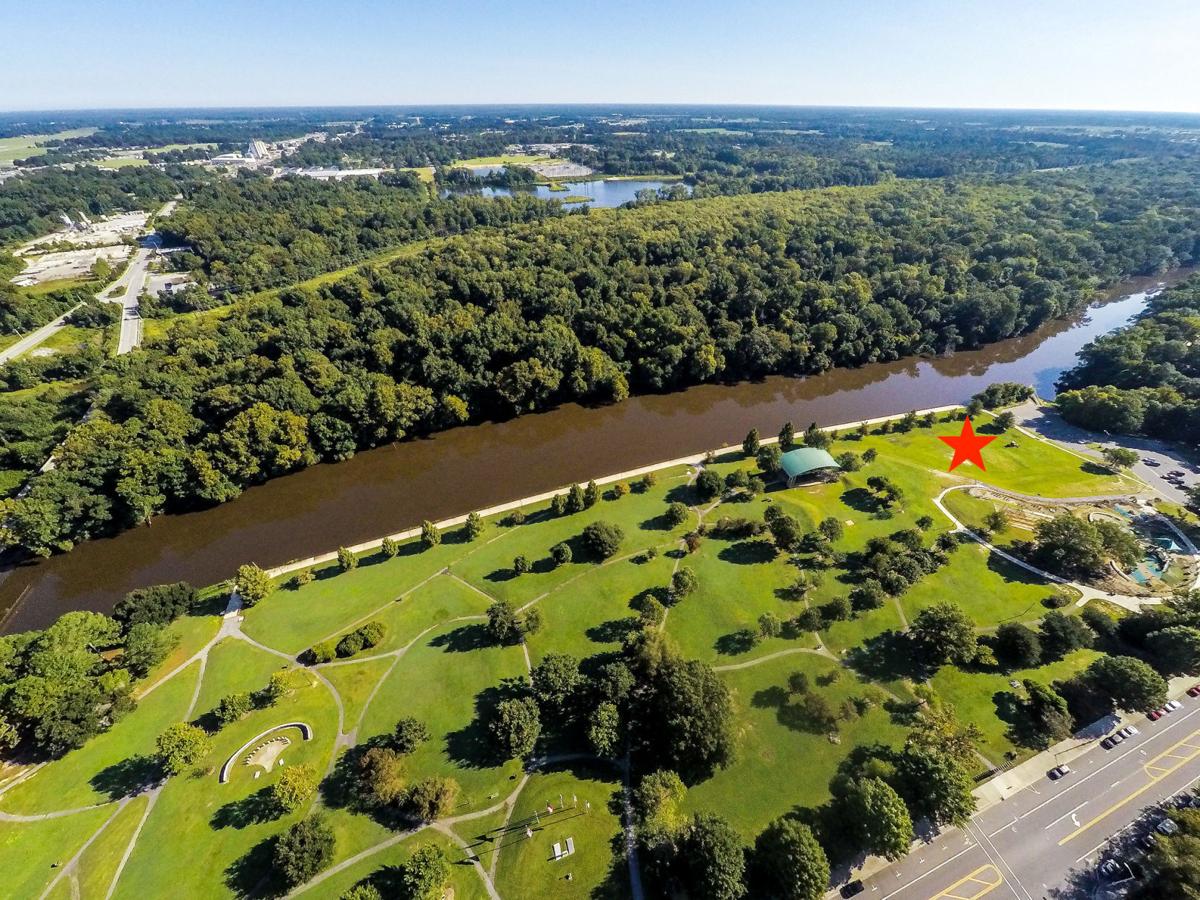 A drone photo shows an aerial view of the Greenville Town Common. The red star shows the general location of a proposed commercial space. 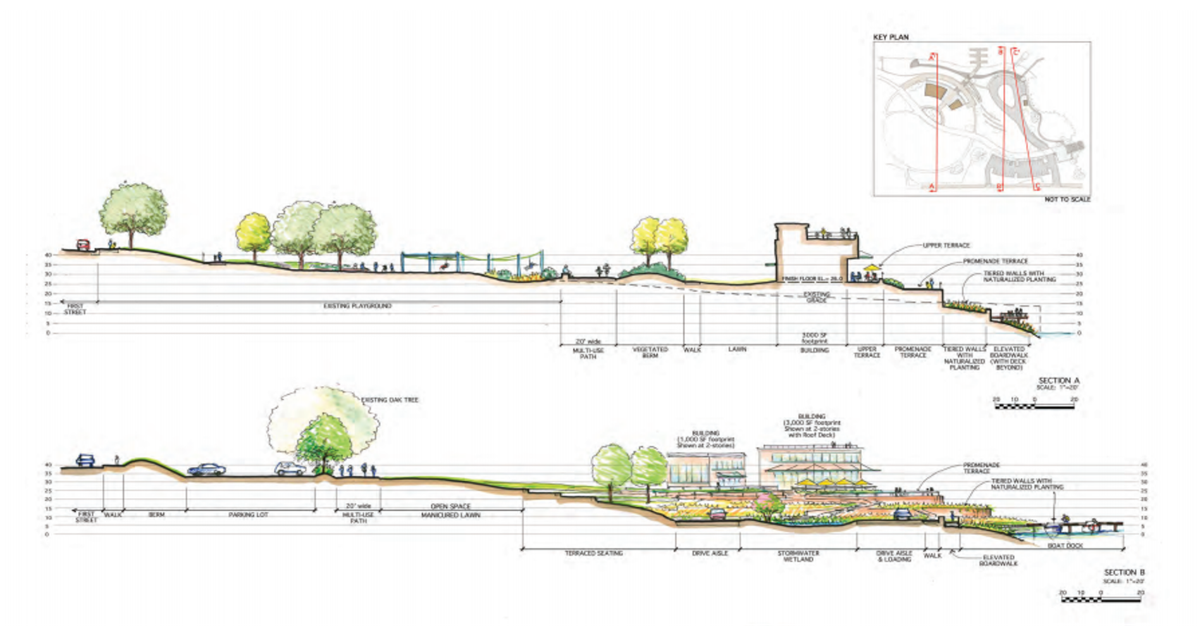 The elevation schematic created by The East Group in 2018 shows a concept for a restaurant and event space in the east corner of the Greenville Town Common. 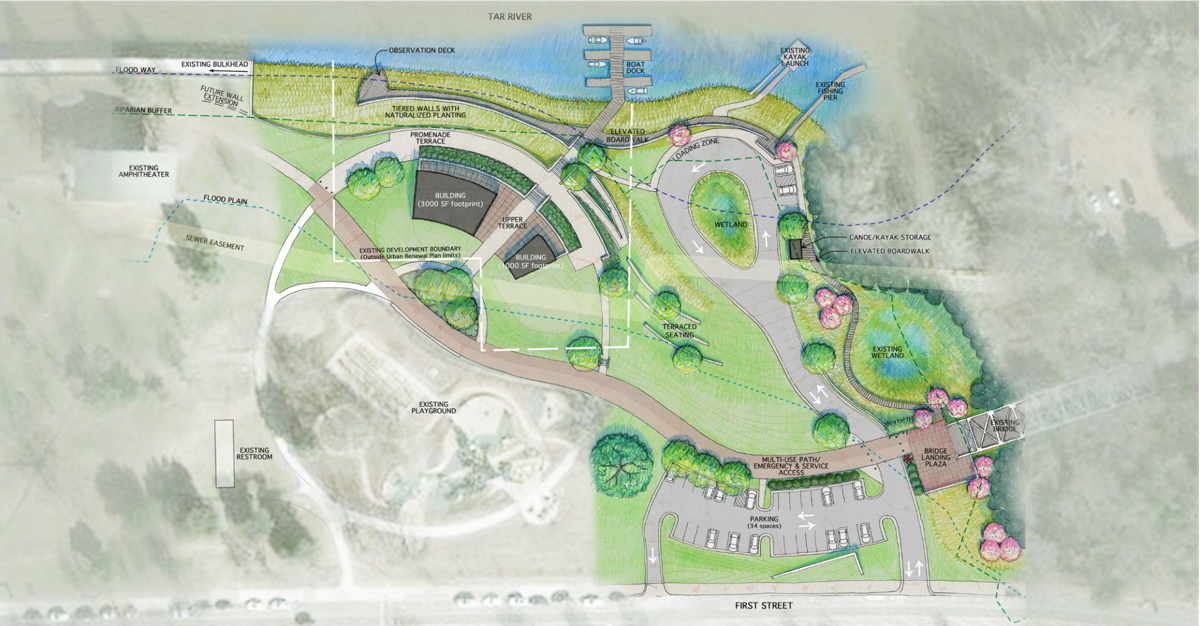 A design developed by the East Group in 2018 shows an overhead view of a possible commercial space on the Greenville Town Common.

A drone photo shows an aerial view of the Greenville Town Common. The red star shows the general location of a proposed commercial space.

The elevation schematic created by The East Group in 2018 shows a concept for a restaurant and event space in the east corner of the Greenville Town Common.

A design developed by the East Group in 2018 shows an overhead view of a possible commercial space on the Greenville Town Common.

A move to rezone part of the Town Common for restaurant and event space is the latest step in the evolution of an 11-year-old master plan guiding development of the park, according to a city webpage created to explain the decision.

A request by the city to rezone 5.23 acres to downtown commercial stirred public concern about the loss of green space after the city’s own planning and zoning board voted 4-3 against recommending its approval.

The Greenville City Council is scheduled to take up the matter with a public hearing and discussion on July 17. The city launched the website last week to provide background about the project’s history, said Michael Cowin, assistant city manager and chief financial officer.

“It goes into a lot more detail than what was originally presented at the planning and zoning commission meeting so the community gets the full concept of the history of this, where it came from and where it could potentially be going in the future,” Cowin said.

The property is currently zoned office residential high density and residential high-density multi-family. It includes 1.4 acres of parkland on the eastern edge of the green space, Cowin said. The remaining acreage contains the adjacent boat ramp parking lot, the pedestrian bridge, Town Creek Culvert and a parcel of property that borders Baker Street east of the bridge.

Cowin said the parking lot, bridge and property east of the culvert won’t be used for commercial development but are included in the rezoning because it’s all part of one parcel.

The idea for an event space stems from a 2010 plan the council approved that identified deficiencies at the park and offered suggestions for maximizing the potential of 20-acre green space. The council was made up of Bryant Kittrell, Marion Blackburn, Rose Glover, Max Joyner, Calvin Mercer and Kandie Smith. Pat Dunn was the mayor.

The plan was updated in 2016 when council engaged Rhodeside and Harwell to develop a schematic design. Five focus group sessions and a meeting open to the public were held at the time. There were other public events to give the public a chance “to engage” in the process, Cowin said.

The update saw a complete redesign of the Town Common, relocating the existing amphitheater further west on the property. The veterans memorial and millennium sundial also would be relocated.

The revised master plan was approved by the City Council, which was made up of Kandie Smith, Rose Glover, McLean Godley, Rick Smiley, P.J. Connelly and Calvin Mercer. Allen Thomas was the mayor.

Since 2016 six of the proposed projects have come to fruition; the Sycamore Hill Gateway Plaza, located on the western edge of the Town Common, the inclusive playground, kayak launch, fishing pier, public restrooms and parking lot resurfacing.

Initially it was recommended a civic building, which was envisioned as an 11,000-square-foot event space with a cafe, restrooms, office space, storage space and views of the park, be located between Washington and Evans streets, Cowin said.

In 2018 it was discovered that the city had agreed to restrictions on the future use of the Town Common when it accepted federal Land and Water Conservation funds in 1987 to build the amphitheater. The restrictions prevented commercial development on most of the property

However, the location of the former WOOW radio tower, on the 1.4 acres at the east end of the park, was privately owned in 1987 and exempt from the restrictions.

The city purchased the property one year later but continued leasing the tower to WOOW until the antenna had to be removed in 2017.

When the city council set its goals and priorities in 2018, implementing the master plan was included. Staff worked with the East Group to develop a schematic design for locating a restaurant/event space on the 1.4 acres.

The recommendation was presented to council during its January 2019 planning session. Follow-up was put on hold because construction on the Town Creek Culvert improvements were beginning in earnest and the parking lot was closed. A year later the COVID-19 pandemic struck and staff further delayed work.

Instead of reintroducing the proposal to the public by updating the council, staff simply pursued the rezoning request. Cowin said the development of a restaurant/event space would occur under a long-term lease between the city and a developer.

“I think it’s very important the community understands that any development that were to occur there would be and must be conducive to it fitting into the park and be open to all patrons to the park. It would only be in a long-term lease situation with a developer and the city would not look into conveying any property as part of any transaction,” Cowin said.

The City of Greenville has posted a history of its efforts to maximize the full potential of Town Common at greenvillenc.gov/government/recreation-parks/town-common-phase-1