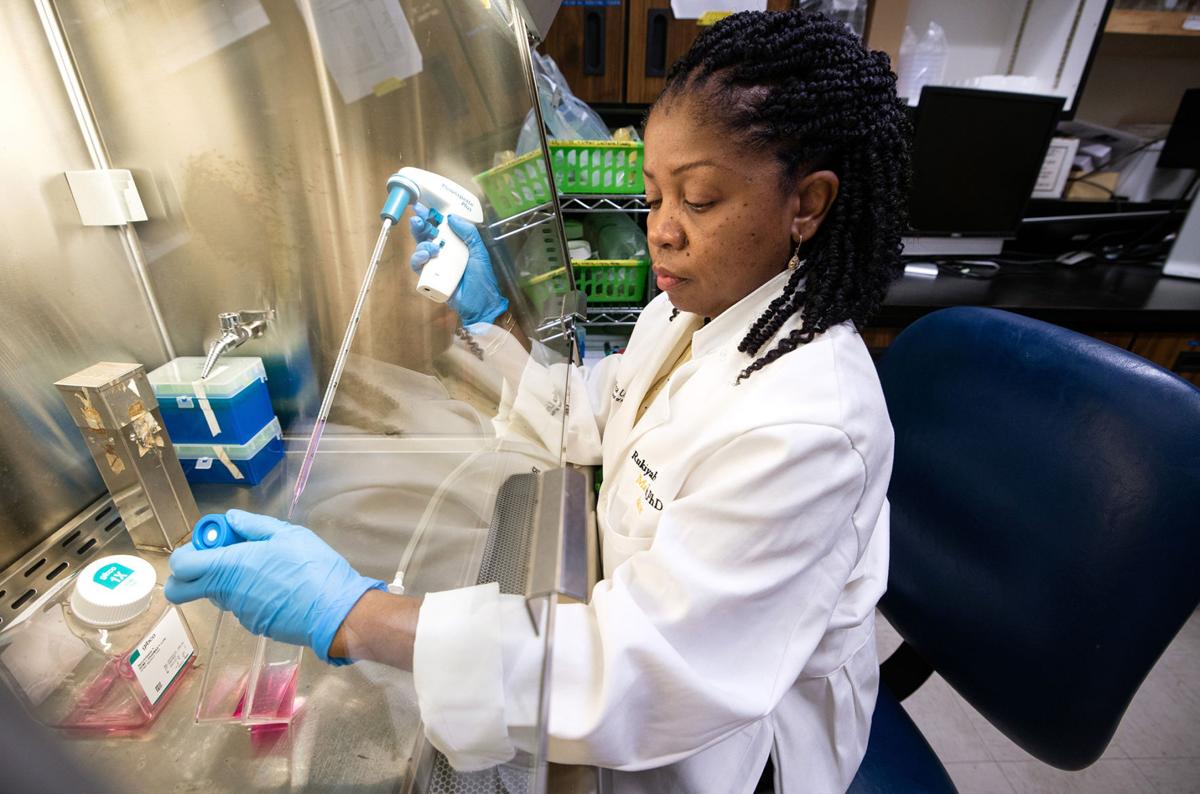 Rukyiah Van Dross-Anderson works in a lab in the Department of Pharmacology and Toxicology at the Brody School of Medicine. 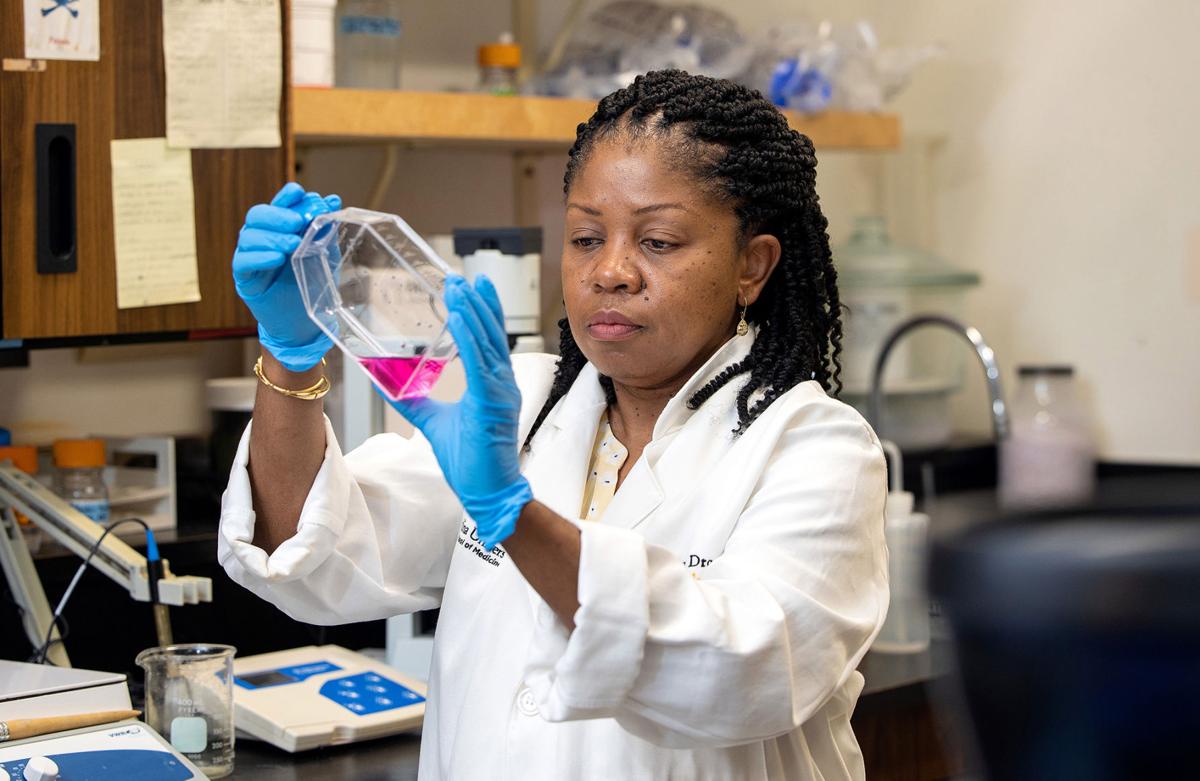 Rukyiah Van Dross-Anderson works in a lab in the Department of Pharmacology and Toxicology at the Brody School of Medicine.

A compound developed by an associate professor at East Carolina University could lead to more effective skin cancer treatments.

Dr. Rukiyah Van Dross-Anderson, a faculty member in the Brody School of Medicine’s Department of Pharmacology and Toxicology , was awarded a North Carolina Biotechnology Center (NCBC) Translational Research Grant for the development and commercialization of 15-deoxy, Δ12,14-prostaglandin J2-ethanolamide — also known as 15dPMJ2.

The compound is designed to treat melanoma patients. More than 100,000 new cases of melanoma were diagnosed in 2020, leading to 7,000 deaths, with five-year survival rates for stage 4 melanoma patients as low as 22.5%, according to Van Dross-Anderson.

“Our lab’s compound causes cancer cells to release molecules that alert the body that a hazardous condition exists,” Van Dross-Anderson said. “This danger signal is recognized by immune cells that can activate other cells that specialize in killing cancer cells. These cancer-killing cells also remember the cancer if it reappears. As a result, the patient may remain cancer free for longer periods of time.”

The $110,000 NCBiotech grant allows Van Dross-Anderson to explore the commercial feasibility of the compound. She will develop a business and commercialization case that includes a manufacturing development plan and a management strategy for the compound. Van Dross-Anderson will decide the commercial future of the product and determine whether to advance the technology and seek additional investment funding once it’s produced.

“The goal of the grant is to conduct studies that will allow innovative laboratory technologies to be converted into commercial products that solve important biomedical problems,” Van Dross-Anderson said. “To figure out the business side of things, we collaborated with experts in drug development, technology transfer and commercialization funding.”

Van Dross-Anderson has worked closely with ECU’s Office of Innovation and New Ventures during the grant proposal process.

“While the researchers on our team have extensive experience conducting biomedical studies, we have limited experience in business matters,” Van Dross-Anderson said. “The Office of Licensing and Commercialization has helped us to obtain knowledge in business and product development by making different workshops and training opportunities available to our team.

“Gaining knowledge about these topics helped us confirm whether our product was needed by the public and to identify the specific patient populations that will derive the greatest benefit from our technology. In addition, the office keeps us informed about training opportunities offered by agencies outside of ECU, including NCBiotech, the Small Business Technology Development Center at ECU and federal funding agencies.”

With her project underway, preclinical studies will soon begin.

“We’re utilizing the funds obtained from NCBiotech to conduct preclinical studies that will determine the effect of our technology on melanoma survival rates,” Van Dross-Anderson said. “We will also work with drug development professionals to refine our roadmap to commercialization in order to make safe and effective anticancer drugs available to the public.”

Van Dross-Anderson is a 2017 National Academy of Inventors inductee. She holds one patent for 15dPMJ2 in the United States and has patents pending in the U.S., Australia, New Zealand and Europe for the compound’s use.

ECU’s Office of Innovation and New Ventures offers entrepreneurial and commercialization-focused programs for students, faculty and staff, including I-Corps@ECU , the Laboratory Licensing Partnership Program and the ECU Digital Market .

The Ledonia Wright Cultural Center (LWCC) in ECU’s Main Campus Student Center is celebrating the naming of its art gallery. In June, the art gallery was named Sankofa, a Ghanaian term of the Akan people.

The word Sankofa loosely means to “retrieve,” but the literal translation means “go back and get.” Sankofa, pronounced San-ko-fa, is often associated with the proverb, “Se wo were fi na wosankofa a yenkyi,” or “Sankofa w’onkyir,” which translates as “It is not wrong to go back for that which you have forgotten.”

“The art gallery name is intended to recognize the importance of reaching back into ancient history for traditions and customs that have been left behind, and the need to reflect on the past to build a successful future,” said Shaun Simon, associate director of intercultural affairs and director of the Ledonia Wright Cultural Center. “The gallery will continue to showcase cultural art and prioritize artists from eastern North Carolina.”

The Sankofa symbol aligns with the mission of the center to provide experiences for ECU students to become confident, globally aware citizens. The gallery’s naming reaffirms the center’s commitment to help create a more culturally aware and responsible campus community, Simon said.

The gallery has hosted several exhibits since the student center opened in 2019.

For more information or to discuss art display and showing opportunities, contact Simon at simons18@ecu.edu or 328-6495.