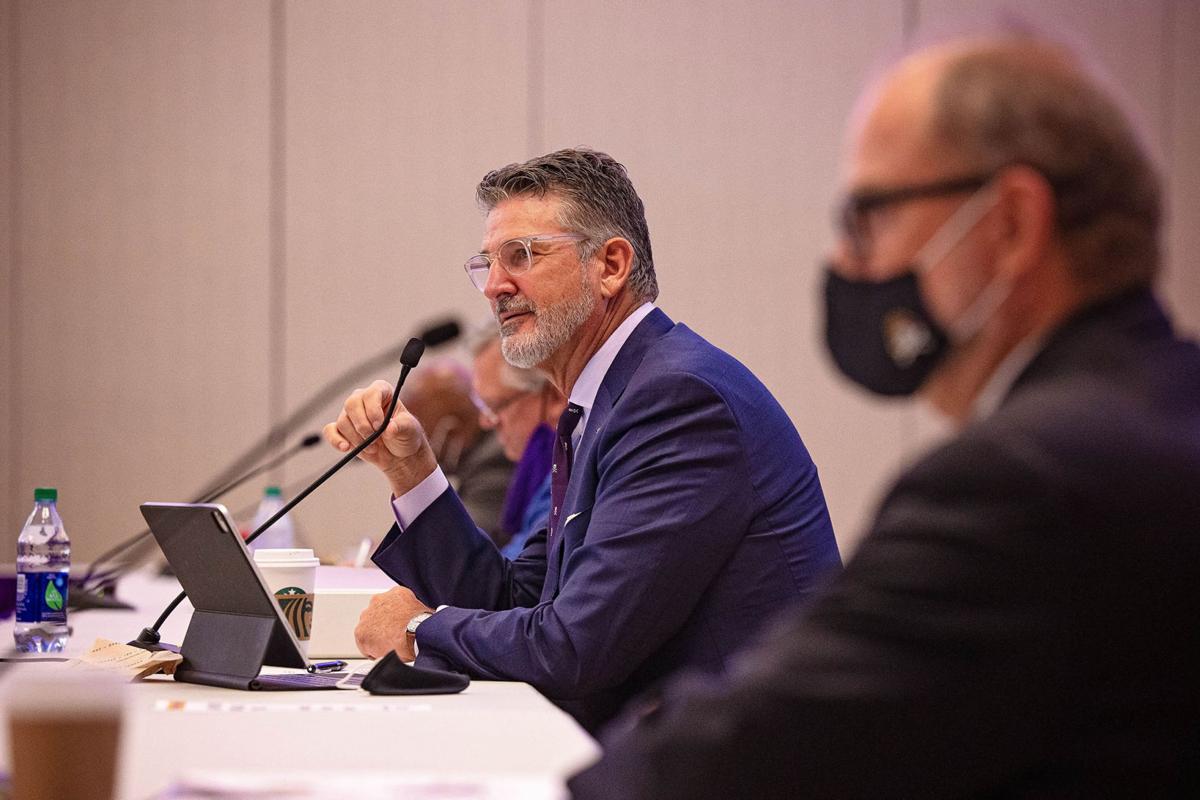 East Carolina University Board of Trustees Chairman Vern Davenport talks to other members in a meeting at the Main Campus Student Center. 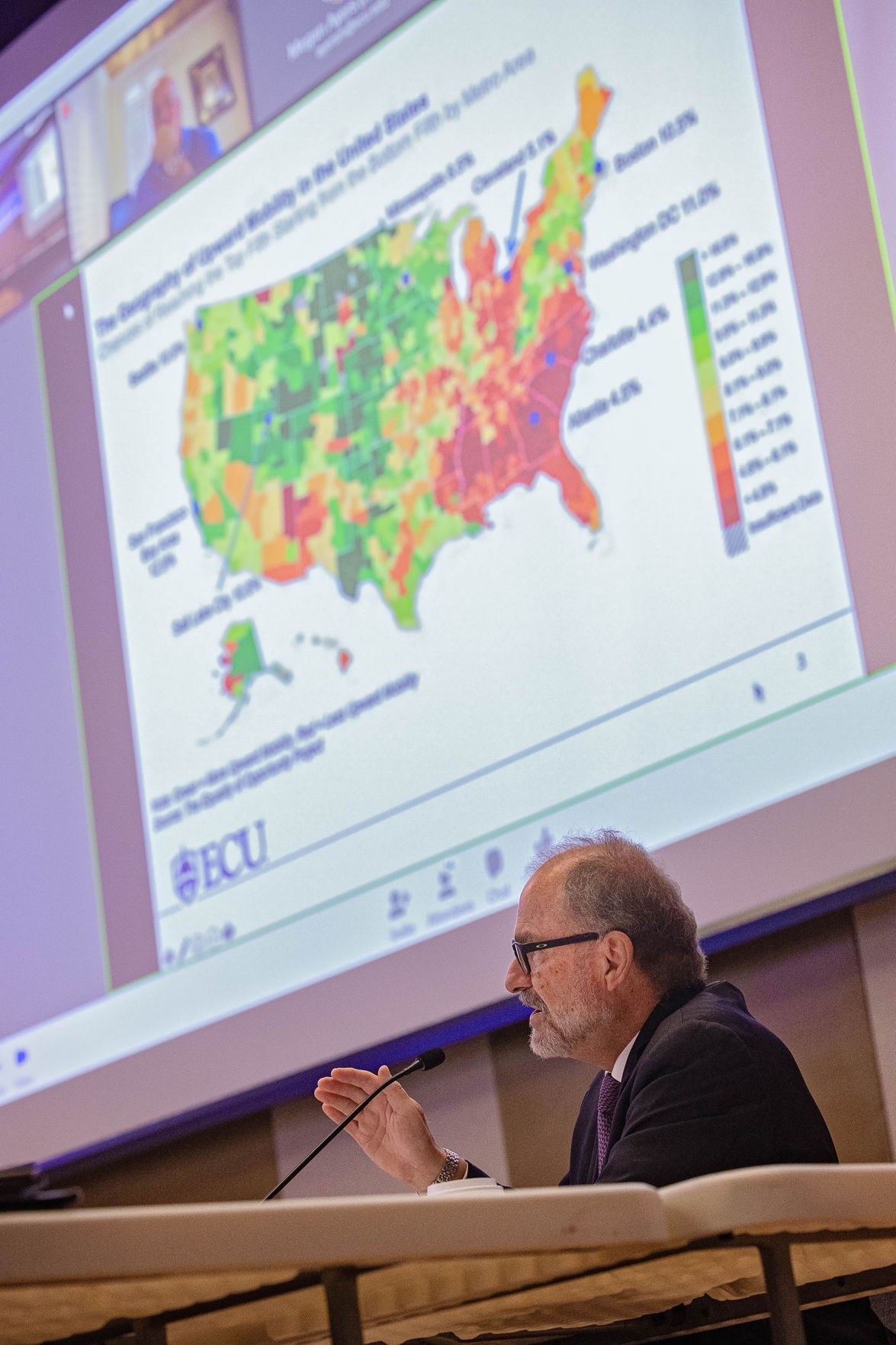 East Carolina University Board of Trustees Chairman Vern Davenport talks to other members in a meeting at the Main Campus Student Center.

East Carolina University’s Board of Trustees discussed plans for the spring and addressed students and faculty concerns on Friday, during the second of two days of meetings.

Interim Chancellor Ron Mitchelson said plans for the spring semester are not complete, but fewer people are expected to be on campus than at the start of the fall term.

“Now we’re going to be open for business, that’s not going to change, and we’ll have students here on campus and we’ll have face-to-face courses,” Mitchelson said, “but we won’t have them in the quantity that the we had planned for the fall. I think most of that’s for sure.”

Mitchelson said ECU was primarily responsible for the spike of COVID-19 cases in Pitt County. He said administration paid close attention to the university’s case count as it began to increase from Aug. 19-21. He said the university made the decision to move classes online on Aug. 22 and announced the decision the following day.

“If we hadn’t done what we did, the pivot, I don’t know where we would be today to be honest with you,” Mitchelson said.

ECU was named to the Princeton Review of best colleges in the country for the second year in a row and was ranked in the top 15% for “bang for your buck” by Washington Monthly, Mitchelson said.

“It just isn’t all about COVID, we’ve got really great things going on at ECU and I’m just so grateful and so thankful for the hard work that everybody has invested to get outcomes like this,” Mitchelson said.

Many students had concerns regarding the transition to online classes and in response, the Student Government Association created a forum for students to share their concerns, said Tucker Robbins, student body president.

Many concerns centered around the lack of clarity on move-out situations, how refunds would work and special grading accommodations, Robbins said.

“While I am not saying there are no concerns out there to be addressed, I feel confident in saying most — if not all — student concerns have either been solved or addressed with more clarity,” he said.

Robbins said it has been difficult to connect with students since the transition to remote education has been made. SGA officers are available online multiple days a week to speak with students via web conference he said.

“We find it crucial to give students the opportunity to connect with their elected representatives from the ease of their mobile device or laptop,” he said.

During the meeting, Robbins asked Board of Governors liaison Leo Daughtry to see if the board would revisit a decision made in July to not reimburse tuition and fees. Robbins said he understood it has been a sensitive topic, but it would be a valuable update.

“I certainly will, I can tell you I know for a fact it is highly controversial on the board,” Daughtry said. “There are those who want to reimburse students and those who don’t think we can afford it.”

Purificacion Martinez, chairwoman of the Faculty Senate, said she was certain that anyone with common sense knew that the pivoting to online classes would have to happen sooner rather than later.

“Our collective refusal to accept the unequivocal fact that we are not in control of nature is astonishing to me,” Martinez said. “Our misplaced faith in personal choice and not in a system of public health is at best misguided, at worst as we are witnessing deadly.”

Martinez said the workload of the faculty has tripled in order to teach in a condensed schedule and meet the needs of the students. She said the pandemic has taken a toll on the faculty just as it has the students.

“Similarly to the emails I receive, these meetings allow me to hear my colleagues, to talk about how their teaching is going, how their students are doing, how worried they are about their children’s education or their parents’ well-being,” Martinez said.

She said the mission of the university can only be protected with good leaders.

After seeing the student athletes unity march against racism, she said the university needed a chancellor who would support those values.

“I encourage all of you to take one step farther and commit to selecting a chancellor who will bolster diversity, inclusion and excellence in our university, independent of external forces no matter how powerful or well intended they might be,” Martinez said.

board approved a $10,320 incentive payment for Dr. Doyle Cummings at the Brody School of Medicine. He does not qualify for Brody’s Basic Science Compensation Plan or ECU Physicians Clinical Faculty Compensation Plan. The intention of the Basic Science Plan is to reward research productivity that is funded via grant funds. He was the primary investigator on four grants between Jan. 1 and June 30. The requested an incentive payment is 20% of the grants that paid his salary, saving the state money.