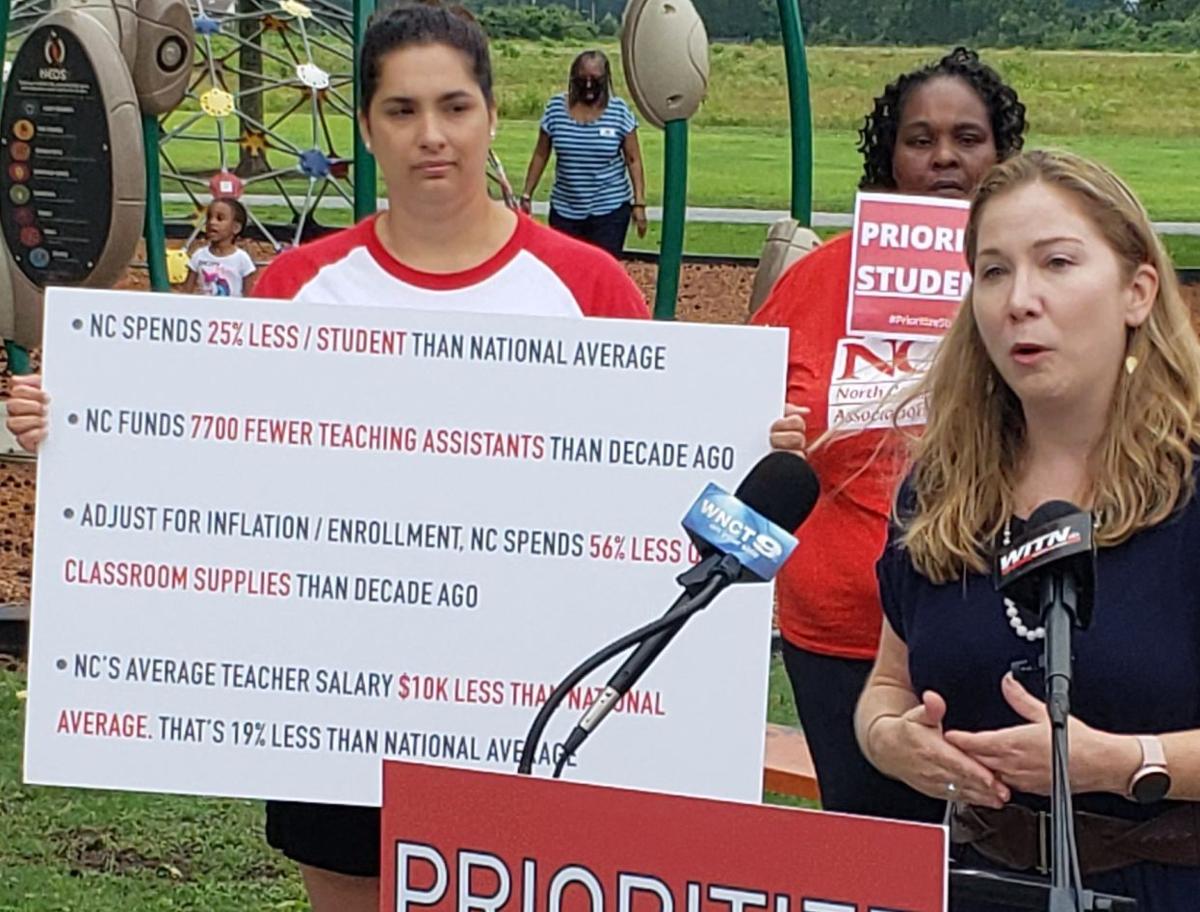 Representatives of the N.C. Association of Educators, along with other education advocates, gathered at Greenfield Terrace Park on Saturday. 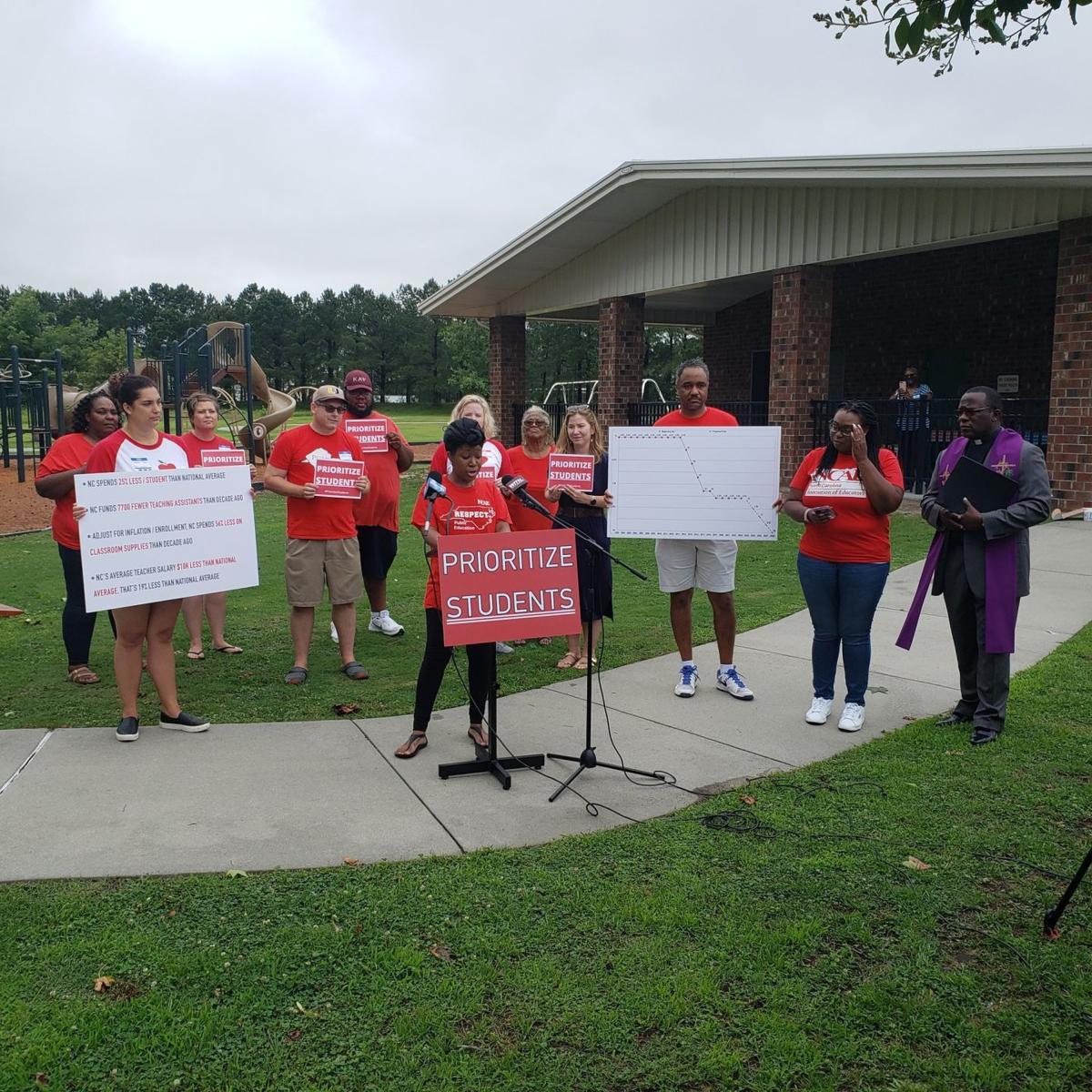 Representatives of the N.C. Association of Educators, along with other education advocates, gathered at Greenfield Terrace Park on Saturday to call on lawmakers to direct a state budget surplus toward the needs of public schools.

Representatives of the N.C. Association of Educators, along with other education advocates, gathered at Greenfield Terrace Park on Saturday.

Representatives of the N.C. Association of Educators, along with other education advocates, gathered at Greenfield Terrace Park on Saturday to call on lawmakers to direct a state budget surplus toward the needs of public schools.

A North Carolina Senate proposal to phase out corporate taxes has drawn criticism from educators who say the state needs a budget that prioritizes students.

Representatives of the N.C. Association of Educators, along with other education advocates, said Saturday that lawmakers should direct a state budget surplus toward the needs of public schools.

“Our state Supreme Court has ruled twice that our state lawmakers are not living up to their constitutional responsibility to fund a sound, basic education for our students,” NCAE President Tamika Walker Kelly said at a news conference at Greenfield Terrace Park. About two dozen educators, dressed in red and holding #prioritizestudents signs, gathered for the event, one of four held across the state.

“They have dug a hole in North Carolina’s public education budget over the last 12 years, and they are not done with their shovel,” she said. “When we adjust for inflation and enrollment … we are spending 56 percent less on classroom supplies than we did in 2009. The state of North Carolina is funding 7,700 fewer teaching assistants than we were in 2009."

“Math is still math, and we don’t get creative with our math like our lawmakers do.”

Emily Biggs, who serves on the Martin County Board of Commissioners, said support staff, including teacher assistants, bus drivers, cafeteria workers and custodians, should have the same minimum pay rate of $15 per hour that is guaranteed for other state employees.

“It is absolutely shameful that we have some teaching assistants and support staff on food stamps,” she said. “State lawmakers must fix this now.”

Biggs, a teacher at Riverside High School in Williamston, said teachers also struggle to live on their state salaries, and many work second jobs.

“We see teachers driving Uber, working in restaurants and in retail stores during the school year and in the summer,” said Biggs, who works part-time as a cashier. “I’m not there (working a second job) as a hobby. Teaching in North Carolina is not paying enough to keep teachers from leaving the state or from leaving the profession or to keep teachers from moonlighting a second job.”

Karen Jackson, whose two children attend Wintergreen schools, said she and her husband were hesitant to move to North Carolina because of the public schools.

“This is absolutely an economic growth issue because we are not going to be able to attract residents and businesses to grow our state’s economy without properly funding education and prioritizing our students,” she said.

Jackson, who serves with her husband, Rob, as senior co-pastor of Greenville’s First Presbyterian Church, is a member of Pastors for North Carolina Children, an ecumenical nonpartisan organization of faith leaders and congregations supporting the state’s public schools.

The Rev. Antonio Blow, a Greene County minister who is also a member of that organization, said children’s needs should come first.

“Jesus knew that caring for children and the less fortunate was an important part of caring for our neighbors all around us,” he said. “This is no less true today.

“Legislators continue to thumb their nose like schoolyard bullies at the needs of our vulnerable children, who are the ones that are being harmed by their neglect,” Blow said. “Legislators put corporations and businesses first, leaving our children to beg for the crumbs from the table.”

Several aspects of the legislative agenda presented on Saturday mirror those included in a “Resolution to Improve Student Learning Conditions,” which sought endorsement of the Pitt County Board of Education on June 7.

The resolution, which also supported the restoration of state health care benefits for retirees, increased funding for broadband, high-speed internet access, and freezing funding for the private school voucher program, received three votes from the nine-member board.

Pitt County Association of Educators President Lauren Piner, who attended Saturday’s press conference, said she was disappointed with the outcome of Monday's vote and said the school board’s response is the reason PCAE did not take the resolution before the county’s Board of Commissioners.

“In several other counties, boards of education and commissioners have actually passed the resolution,” she said, adding that the resolution had support of more than 400 teachers and community members locally.

“I was hopeful that Monday night we would have been able to sort of join hands,” she said. “I know that, unfortunately, education has become partisan.”

But Piner said that NCAE’s legislative goals are not designed to be Democratic or Republican issues. She said that local boards are doing their best to deal with unfunded mandates from the Legislature, “but when it comes down to it, funding our schools is the responsibility of the Legislature, not county commissioners, not boards of education.

“We wanted people from all 115 school systems (in the state) to really sort of raise their voice and say these are things we need,” Piner said. “They’re not crazy. They’re not radical. It’s things that are simple that we want for our students.”

Educators and supporters on Saturday also held “Teach the Truth” rallies in Greenville and across the country to protest efforts to curb lessons about racism and related aspects of U.S. history.

In Greenville, a group marched from the 10th Street Connector at 14th Avenue to Sycamore Hill Gateway Plaza at the Town Common downtown.

Educators rallied to say they will not be bullied against teaching the truth about U.S. history, according to organizers with the Zinn Education Project. They included members of Parents for Public Schools, NCAE, NC Civil, Digging for Diversity, educators, students and community members.

The event comes as lawmakers in more than 15 states attempt to ban lessons about the role of racism, sexism, heterosexism and other oppression had in U.S. History, organizers said.

Proposed legislation in Missouri is typical of many of these bills, failing to name inaccuracies or misleading information in banned curricula, a news release said.

Not acknowledging the country’s actual history, including racism and other oppression, is deception, not education, the release sad.