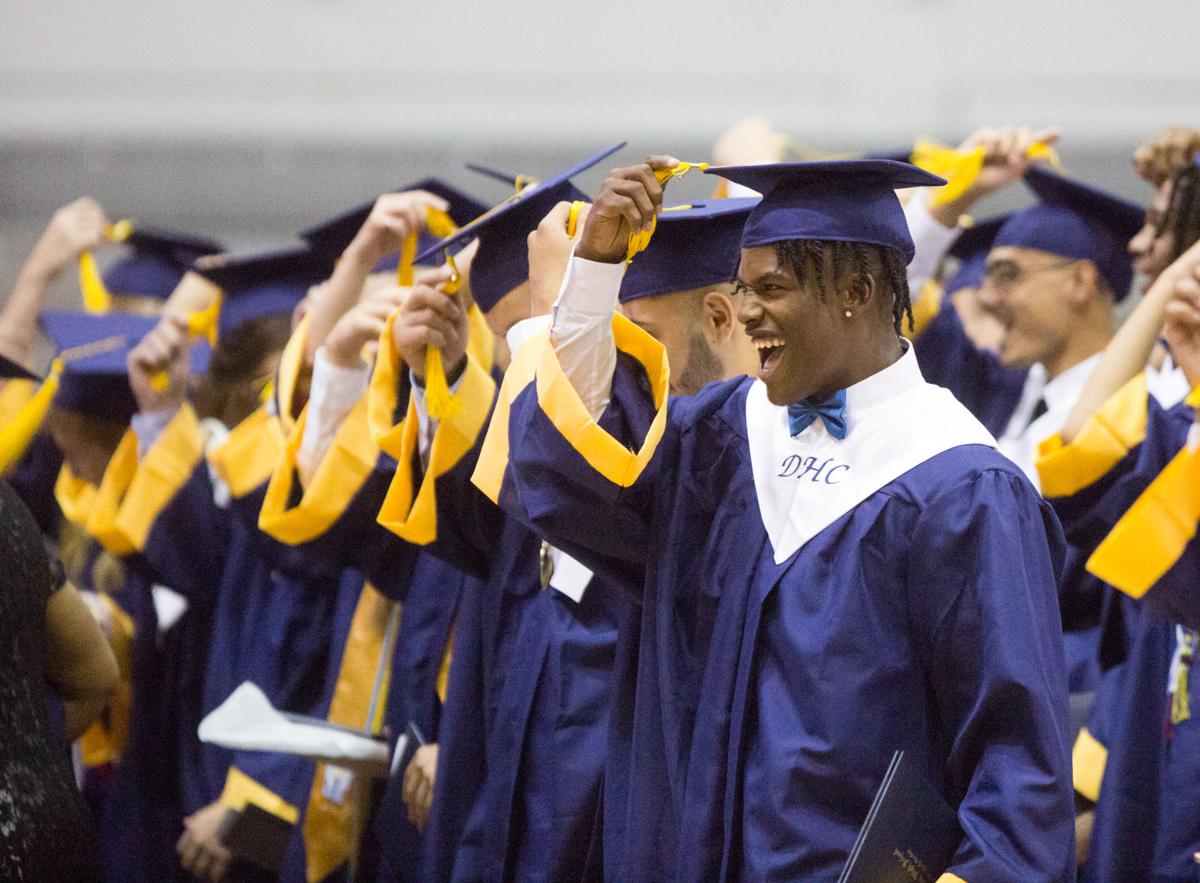 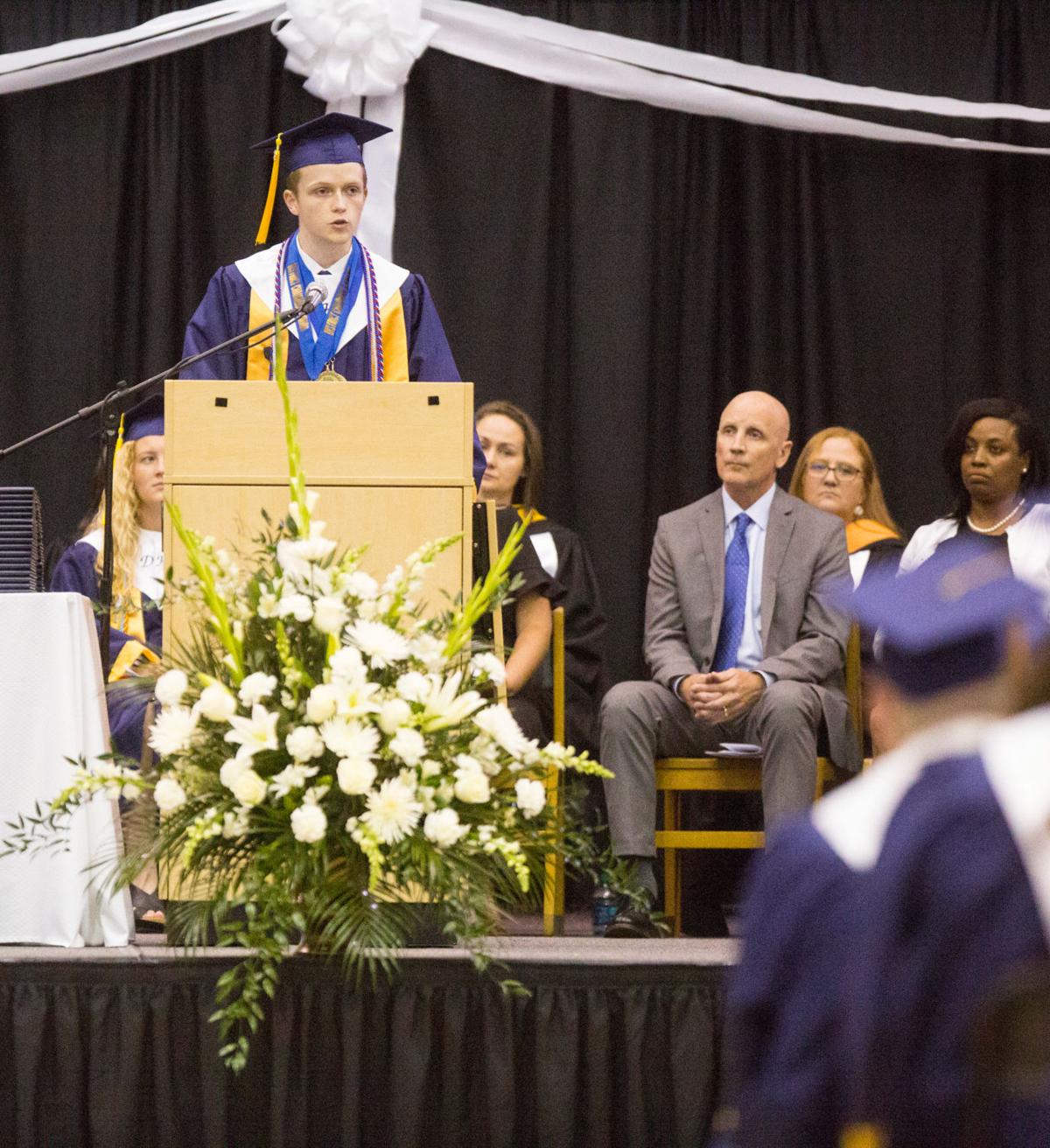 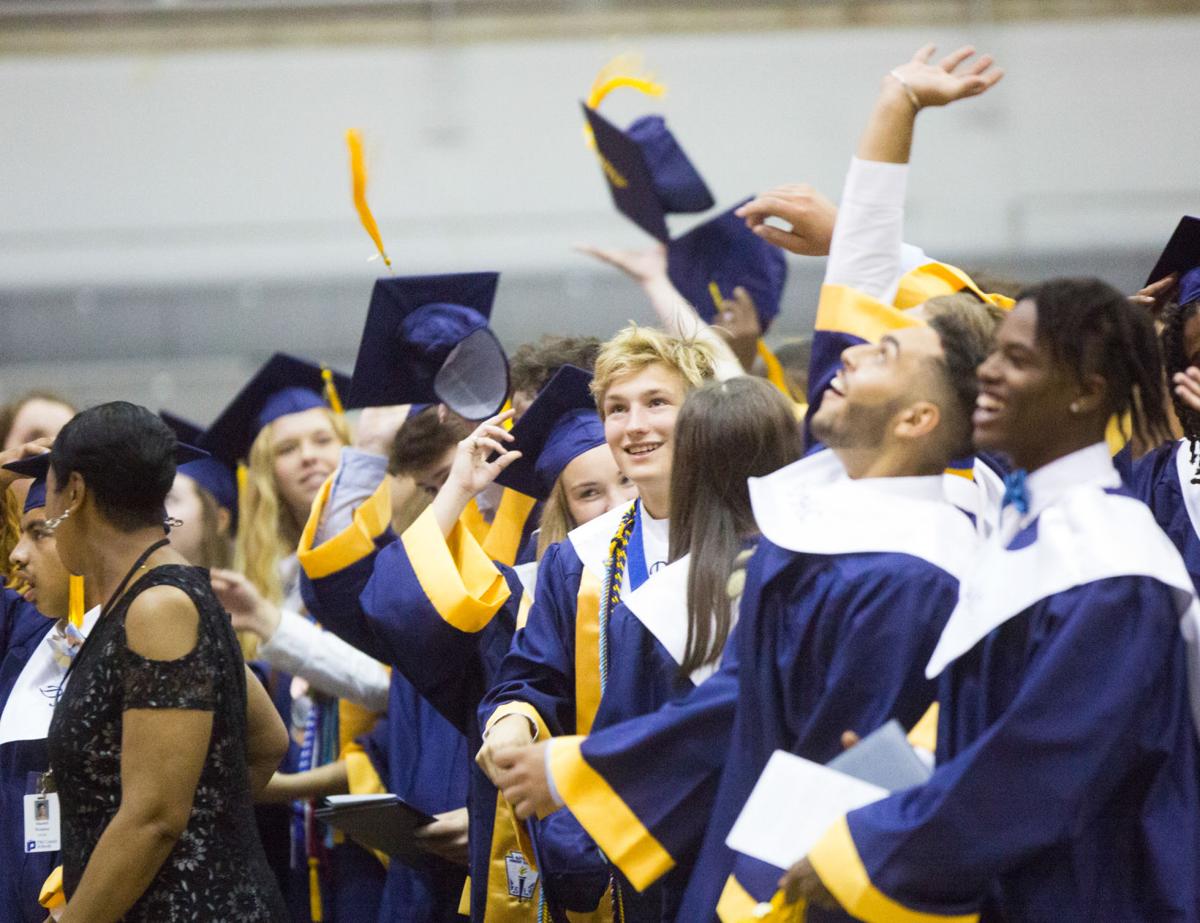 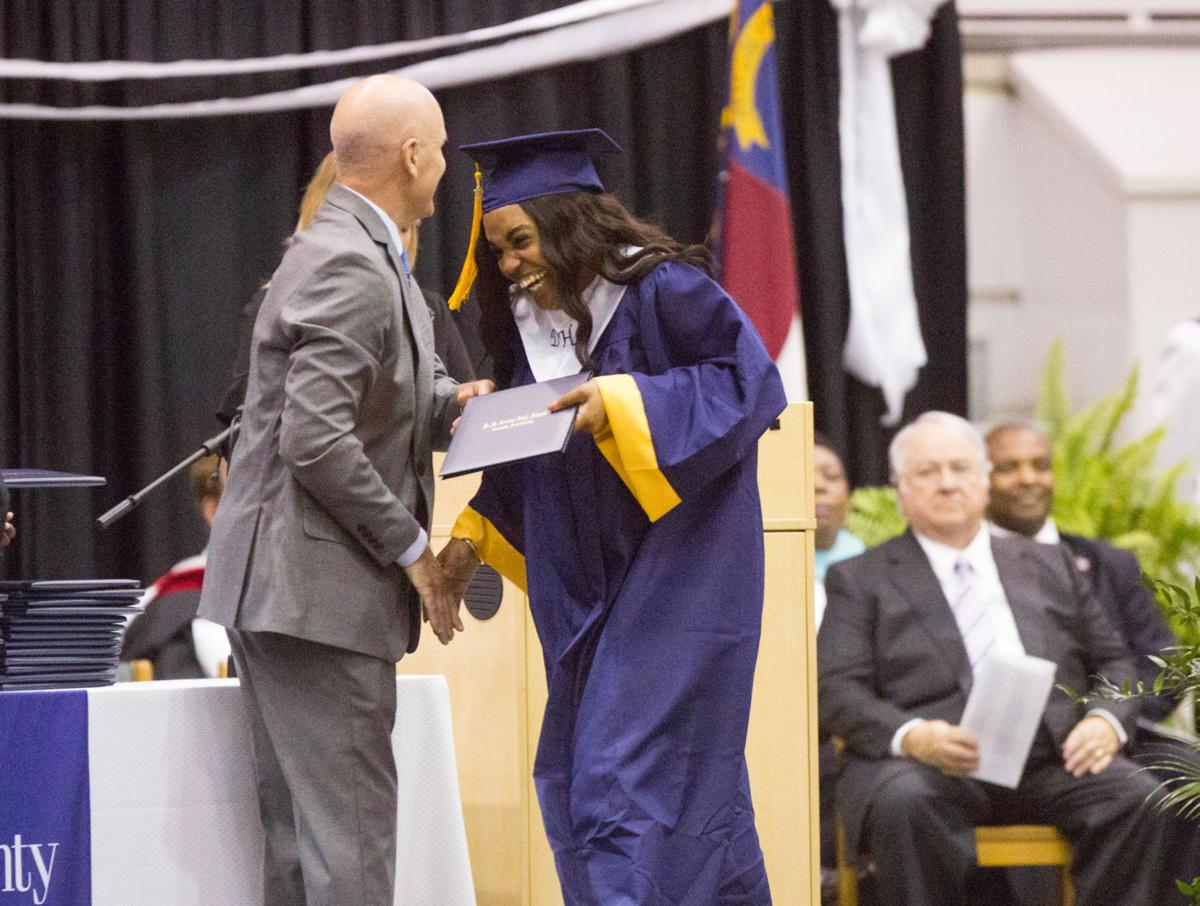 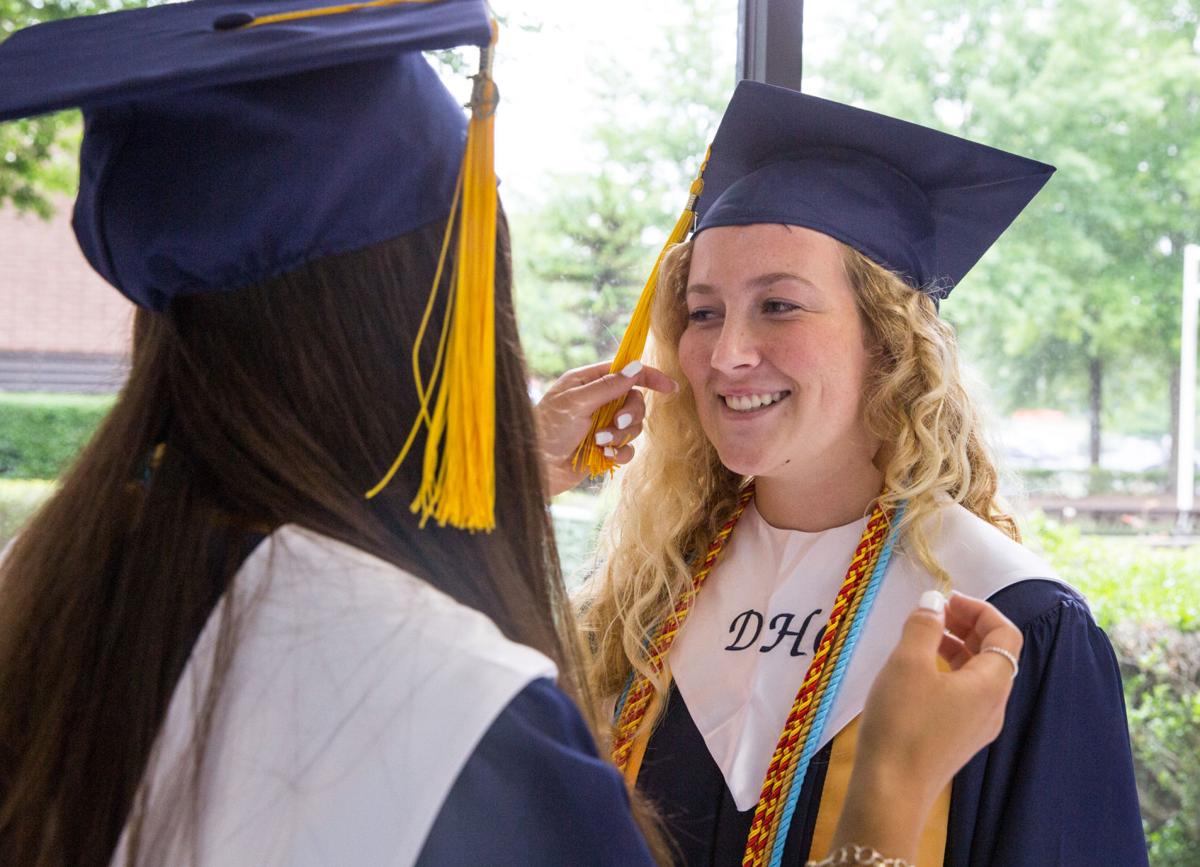 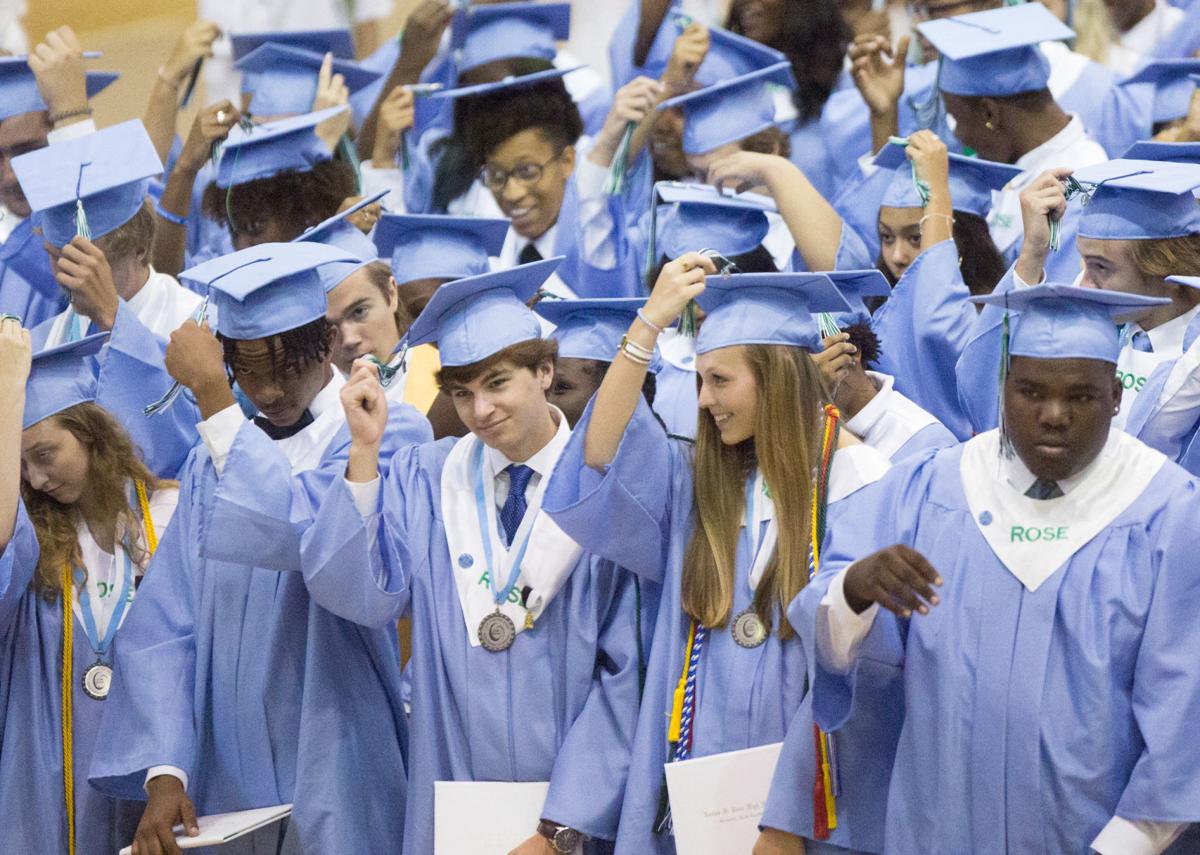 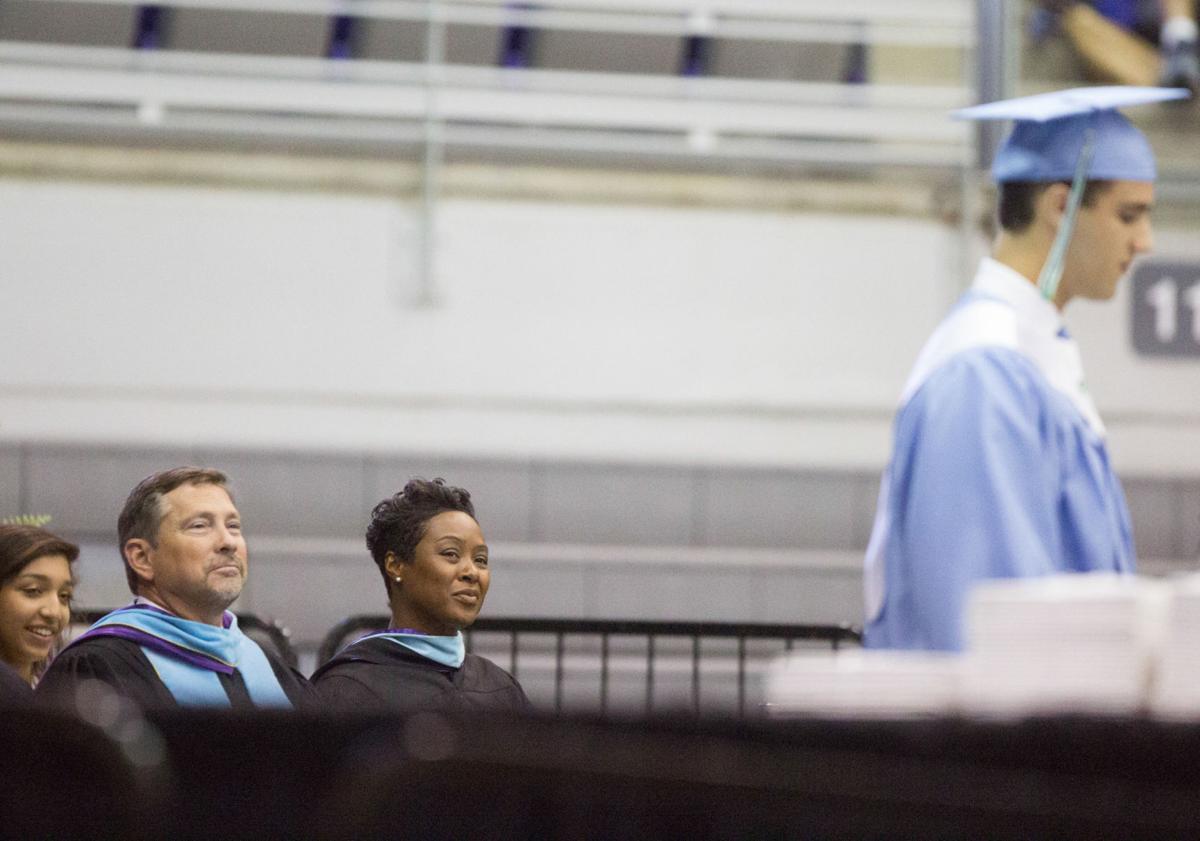 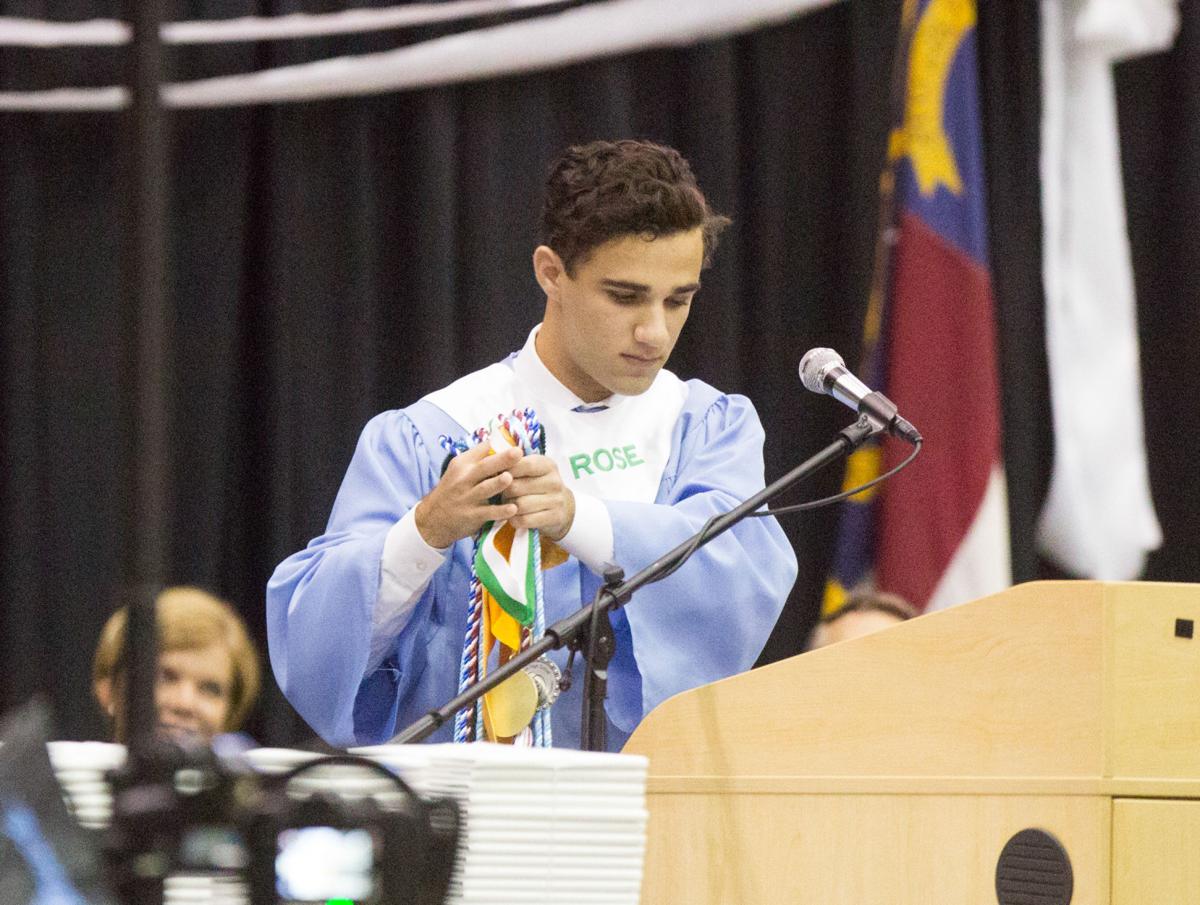 J.H. Rose Valedictorian Andrew Lavine takes off his cords and medals during his speech during the graduation ceremony at Minges Coliseum on June 7, 2019. (Molly Urbina/The Daily Reflector) 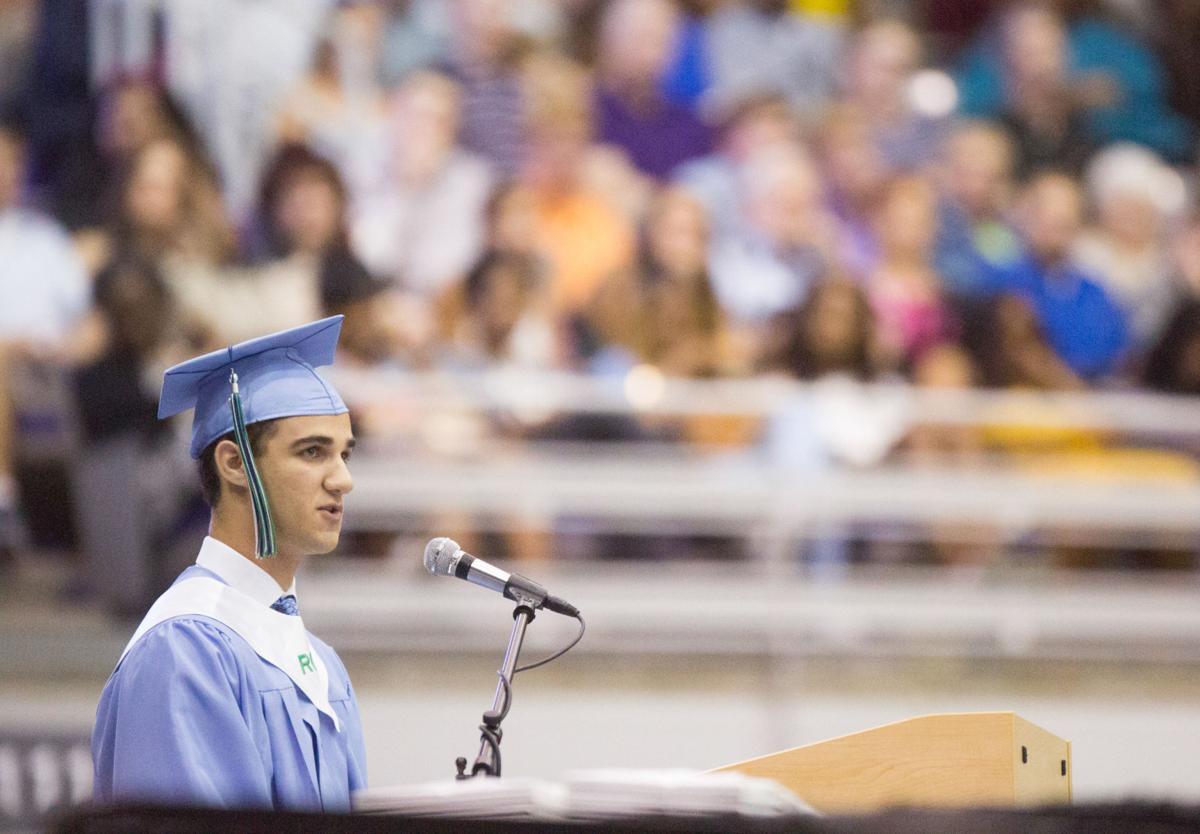 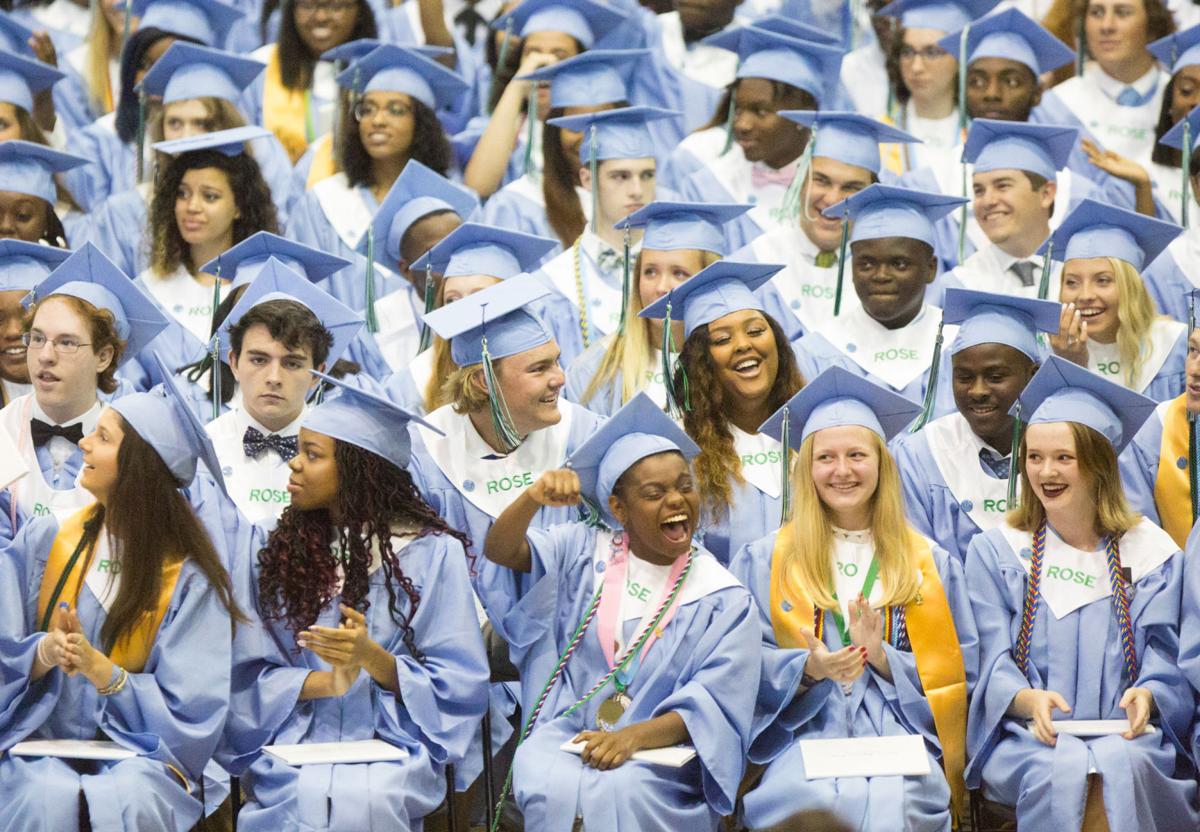 J.H. Rose Valedictorian Andrew Lavine takes off his cords and medals during his speech during the graduation ceremony at Minges Coliseum on June 7, 2019. (Molly Urbina/The Daily Reflector)

With thousands of family members and friends cheering them on, members of the D.H. Conley Vikings Class of 2019 set sail Friday for points beyond high school. About 400 graduates received their diplomas at the school's 49th annual commencement ceremony, held in ECU's Minges Coliseum.

Also recognized in the program were students Jacob Alexander Golden and Imagine Y'Myrian Rouse, who graduated with an associate's degree from Pitt Community College last month before receiving their high school diplomas Friday.

Valedictorian Matthew Lower advised fellow students to “look both ways” — looking up to their parents and other adult role models while looking ahead to the future.

“I think we can learn a lot from the adults in our lives,” said Lower, who received a Levine Scholarship to attend the University of North Carolina at Charlotte in the fall.

“Talk to these people,” he said. “I mean, don't just make small talk with them. Ask them about their lives. Chances are they've been through something that you are currently struggling with.”

Salutatorian Coleman Ferrell challenged classmates to prepare to face obstacles in their lives. Ferrell, who will be enrolled in East Carolina University's Honors College in the fall, plans to be part of the track team.

“My experience as a runner has shaped the way I view hardships,” he said. “In life we have to cover hurdles.

“You have finished a lap of the race, but you are not at the finish line yet,” he said. “Finish the race strong.”

Graduate Tyzaria Carney had T-shirts made for her family to wear as they watched her finish this part of her educational journey. The shirts read “Proud Mom, Proud Aunt and Proud Grandma.”

Tyzaria's mother, Angie Moore, and her grandmother both attended Conley, but neither graduated, making Tyzaria's accomplishment an even greater milestone for the family.

As he addressed his fellow graduates on Friday, J.H. Rose High School valedictorian Andrew Lavine stood at the podium, took off his honor cords and talked instead about the ties that bind the Class of 2019.

“Today we all wear the same exact blue gowns,” he told more than 300 graduates and their families and friends on Friday in ECU's Minges Coliseum.“These threads that we wear are just ornaments, and when we walk out of here they disappear.

“We all get the same exact diploma today,” Lavine said. “It won't say your class rank.”

Lavine, whose 5-minute speech was interrupted a half dozen times by applause, said it was unfair to judge other graduates based on the number of honor cords they wore.

“There's no cord for working hard to support your family. There's no cord for devoting all of your time to a sport, no cord for spending time with your friends,” he said. “All of those activities are much more important than some honor society I'm in just to get into college.”

In her speech, Eason also emphasized collaboration over competition.

“Rose has enabled all of us to go and do something we were passionate about,” said Eason, who served as editor of Rampant Lines, the school newspaper, and plans to study journalism.

“As we embark on this new journey, we must also ensure that this next step is the one that brings us the most joy,” she said. “... If we focus on being kind to others, we leave little legacies along the way that quickly add up to a life well-lived.”

Principal Monica Jacobs, who announced that the senior class received more than $9 million in scholarship offers, expressed pride in students' commitment to each other.

She replayed a story of a graduation a few years ago when students had started the year wearing buttons that read “Meet Me at Minges” as a sign of a commitment to make it through to graduation together.

“Just as that class did, you all have achieved many goals through effort, celebrated together with Rampant pride, transformed yourselves and your community while rising up to each challenge,” she said. “... I offer you one piece of advice and that is, as you rise up, lift someone else along the way as someone did for you.”