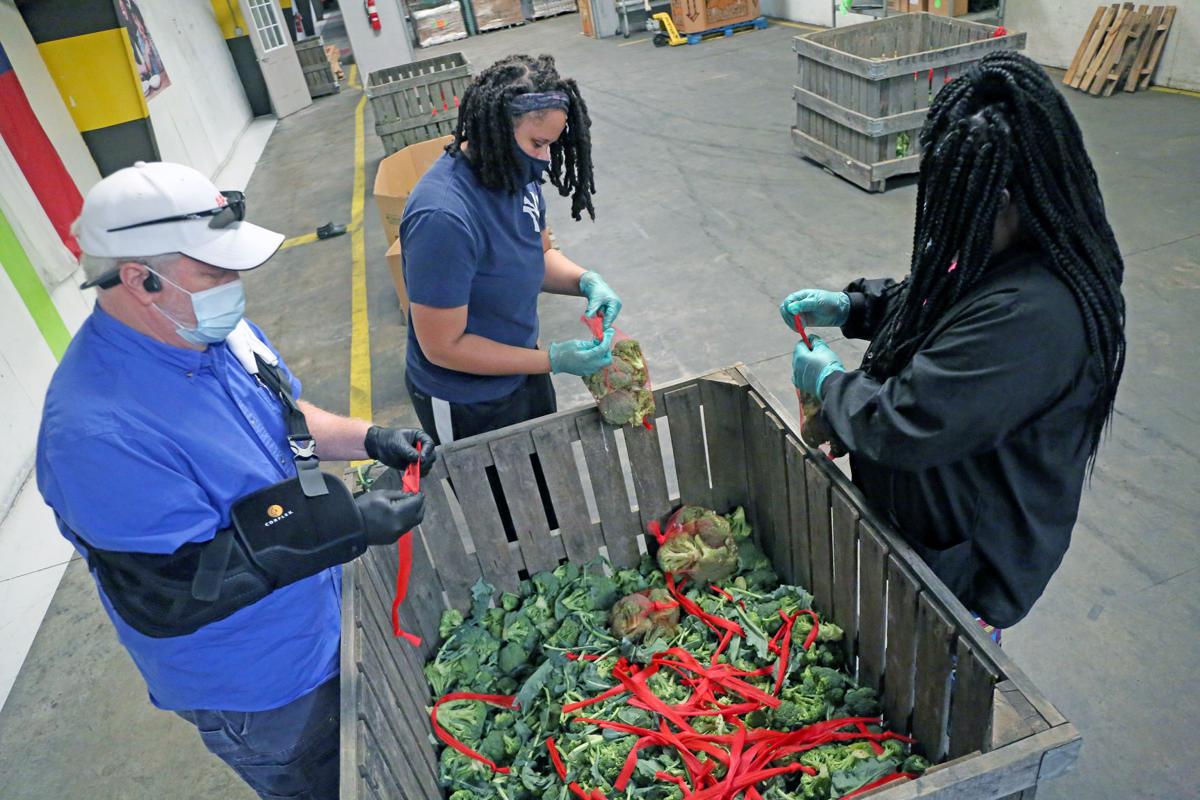 Kevin Naus, a volunteer with the Food Bank of Central and Eastern N.C., and Gabby Dorismond, administrative assistant for the food bank, bag broccoli. The food will then be distributed to food pantries and given away to those in need. 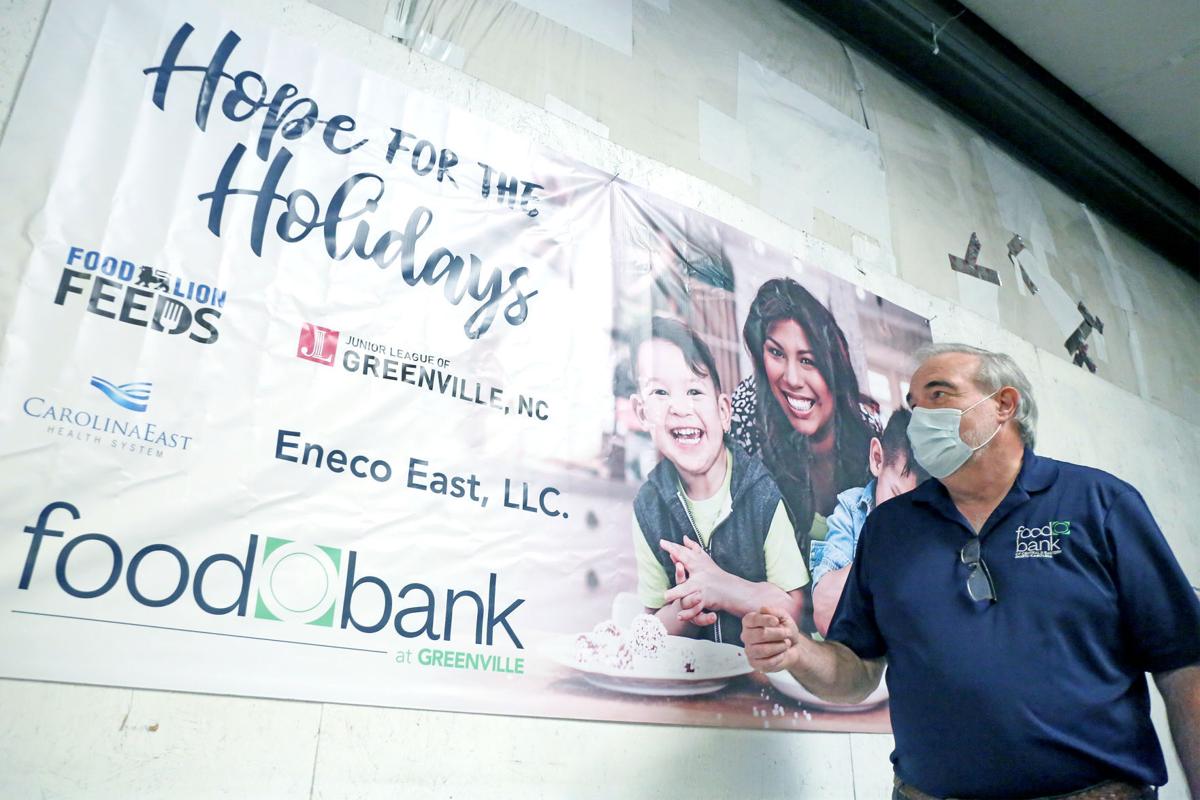 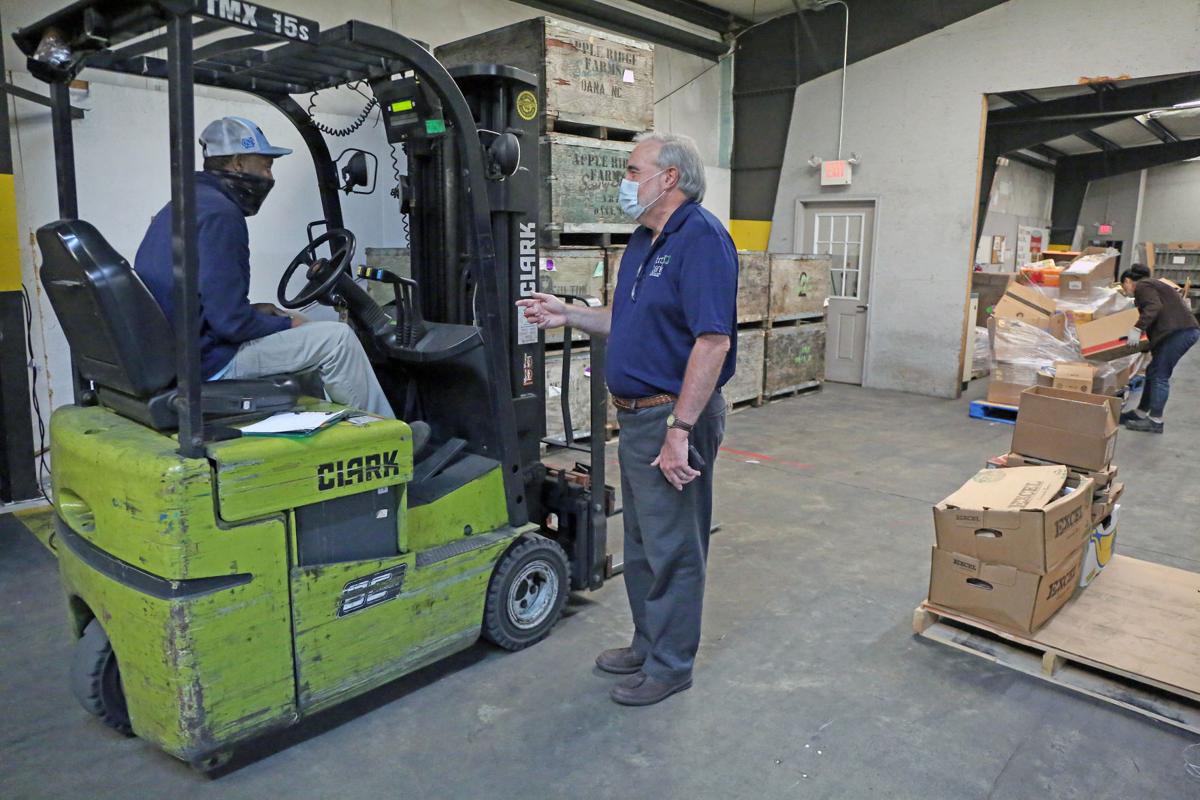 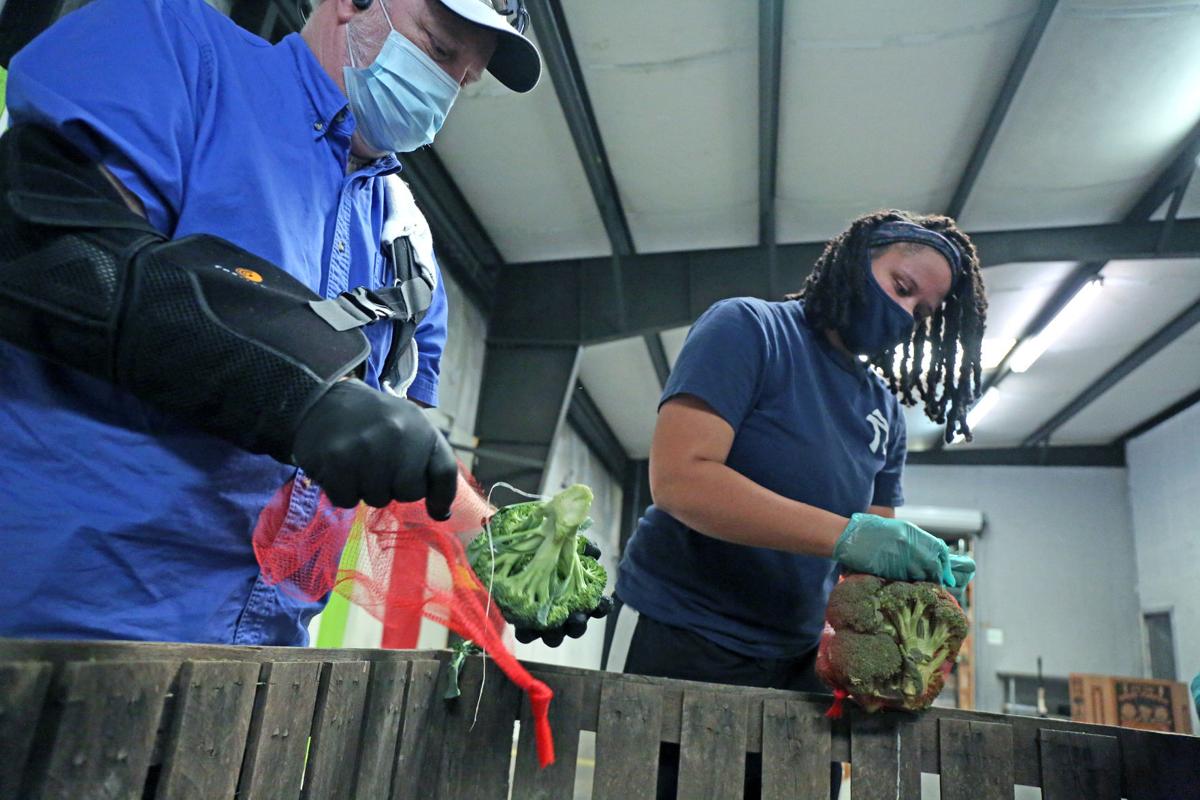 Kevin Naus, a volunteer with the Food Bank of Central and Eastern N.C., and Gabby Dorismond, administrative assistant for the food bank bag broccoli. The food will then be distributed to food pantries, and given away to those in need.

Kevin Naus, a volunteer with the Food Bank of Central and Eastern N.C., and Gabby Dorismond, administrative assistant for the food bank, bag broccoli. The food will then be distributed to food pantries and given away to those in need.

Kevin Naus, a volunteer with the Food Bank of Central and Eastern N.C., and Gabby Dorismond, administrative assistant for the food bank bag broccoli. The food will then be distributed to food pantries, and given away to those in need.

The agency responsible for distributing food to more than 900 outreach efforts in the region is managing increased demand and radical changes as the holidays arrive and the pandemic continues.

The Food Bank of Central and Eastern North Carolina has seen a 38 percent increase in requests for food assistance since March, said George Young, the agency’s eastern regional director in Greenville.

“There are approximately 170,000 people facing food insecurity between Greenville and the coast,” Young said during a visit to the agency this week.

“They are either looking for food, or are struggling between paying rent and medicines or buying food. A lot of people are working two or three part-time jobs. We have a massive struggling population out there.”

The Food Bank serves 34 counties, distributing supplies to pantries, soup kitchens and other outreach agencies that serve thousands weekly. Young oversees distributions in 10 of those counties as director of the Greenville and New Bern branches.

The Greenville and NewBern branches have distributed over 17.1 million pounds of food and 41,000 family boxes since March 16, he said. The agency, its staff and volunteers have worked every day since the pandemic hit, although they have had to change the way they operate.

“The biggest challenge is the reduction in our volunteer force,” Young said. “Prior to the pandemic, we were able to have up to 100 volunteers at a time working on projects, but now we can only have eight to 10 people per shift.

“We also used to be able to have young people volunteer, with a parent. Now you have to be 18 to 60 years old, be in good health and not have been in contact with anyone who is sick,” he said. “This has dramatically changed how we prepare food for our partners.”

Volunteers box, sort and dispose of any spoiled produce that comes in from farms. The food is then loaded onto pallets for the partner agencies to come get, or the agency will deliver it by refrigerated truck.

The pandemic also radically changed the food chain because restaurants no longer are able to absorb a lot of food, Young said.

The U.S. Department of Agriculture is buying food from farmers and manufacturers that would have gone to restaurants then distributing is to food banks.

“There is a lot of food coming in and it is being well-distributed,” Young said. “That is the very positive side.”

The downside is that it costs the food bank more money to distribute the increase where it is needed most.

“We have had to rent more trucks and hire more drivers to get that food out. Because of the nature of the food being fresh, it has to be turned around very quickly,” Young said.

He said the biggest need the food bank has right now is for monetary donations.

“We definitely are looking for folks to help with financial donations. It is the easiest, most effective way to very quickly help the food bank,” Young said.

“We are not going to turn any food away, but you also want to have food that makes a meal,” he explained. “You need meats, produce, and fruits. We have a big initiative going on that provides more nutritious food to communities with the greatest need.”

“We can take a dollar and provide five meals, or $10 worth of food. And 97 cents of every dollar goes to food distribution and meals. We have a great record of using donors’ dollars really well,” he said.

The agency is hoping food drives will increase over the holidays, Young said.

“Right now we have an initiative going on for holiday meals. We are really grateful for the folks that are supporting that initiative,” he said.

“We also have partnerships with the Farm and Food Council and other organizations, for healthy food drives in various locations,” Young added. “They bring the food here, we weigh it and then it is turned around and distributed.”

The reason it is weighed and monitored is to keep abreast of where it is going.

“There is a fair share formula. Each county gets a fair share of the food being distributed, so it is not going overwhelmingly to one location,” Young added.

The two branches work with a network of over 200 partner agency food pantries to distribute food. Anyone who needs should visit foodbankcenc.org/find-help/food-finder/.