Log In Sign Up
You are the owner of this article.
Edit Article Add New Article
You have permission to edit this article.
Edit
News
Opinion
Sports
Features
Obits
Multimedia
Local Events
Jobs
Classifieds
e-Edition
Our Sites
Extras
Share This
1 of 9 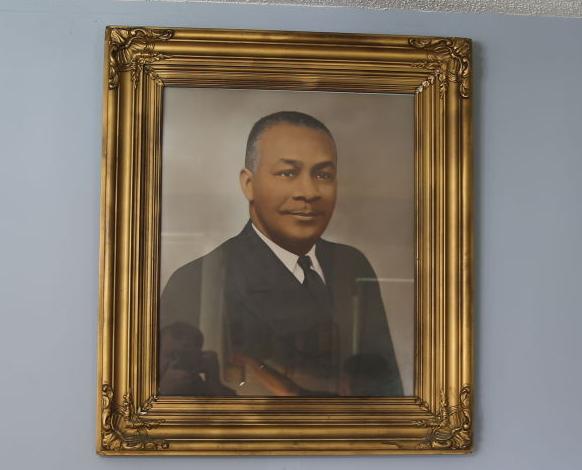 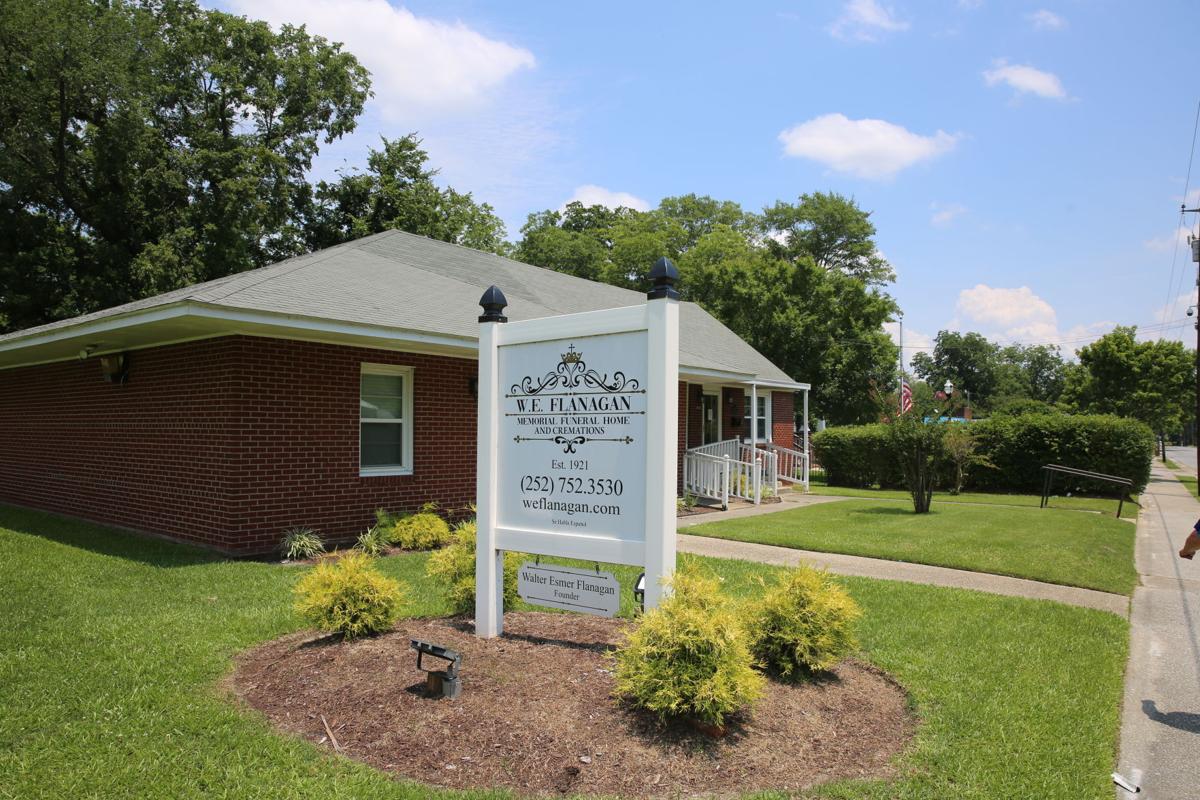 W.E. Flanagan Memorial Funeral Home and Cremations has been at its West Fifth Street location since the late 1940s. 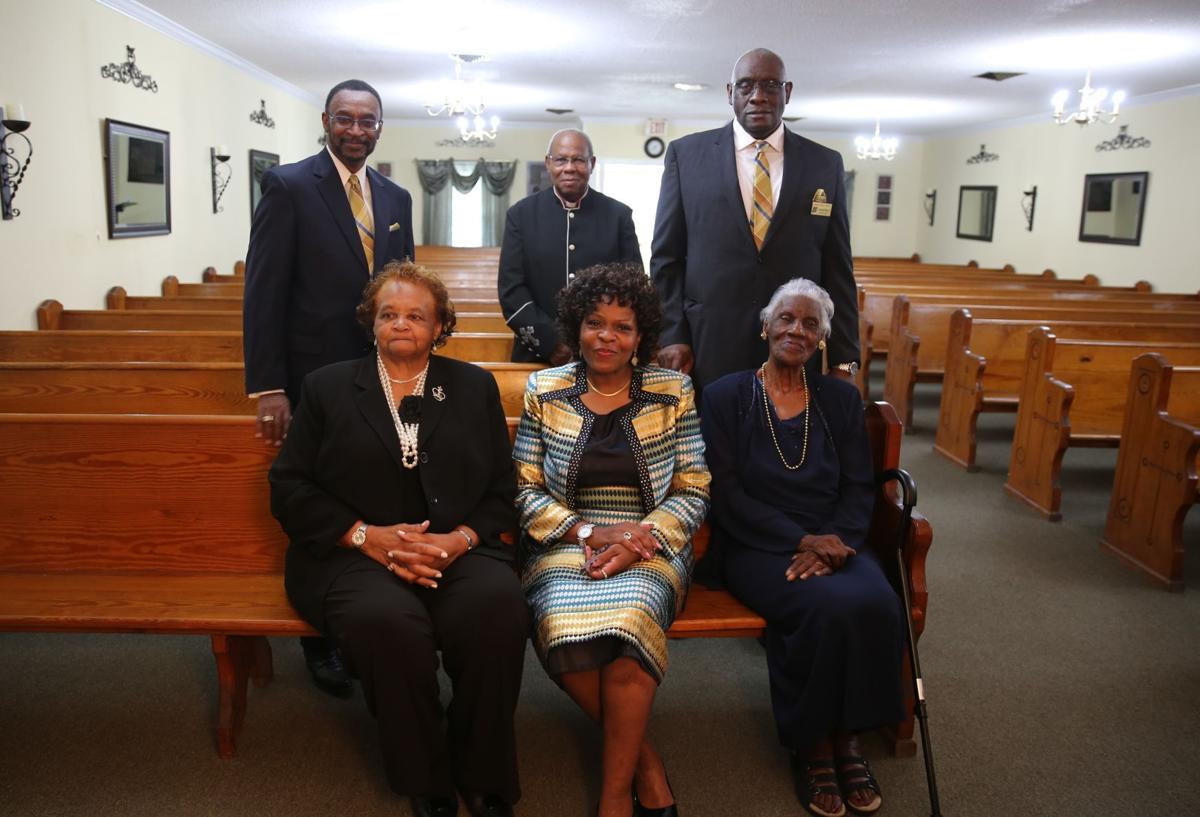 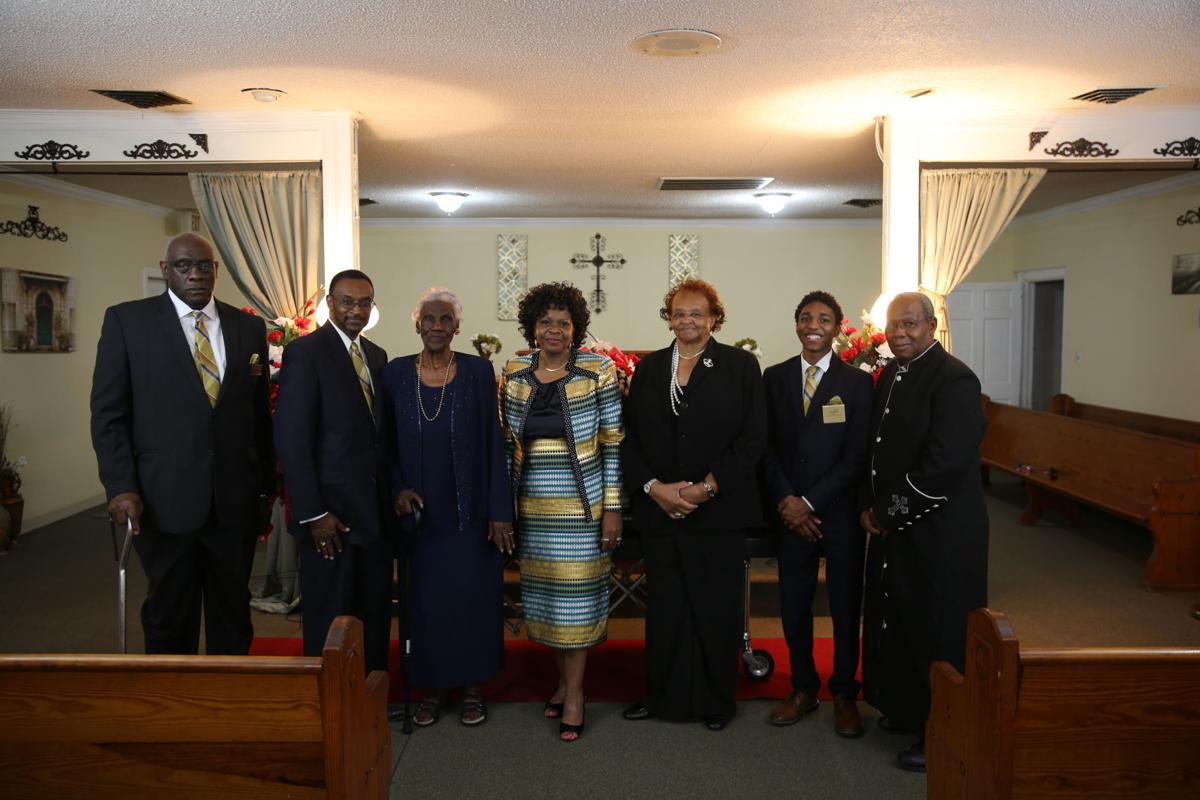 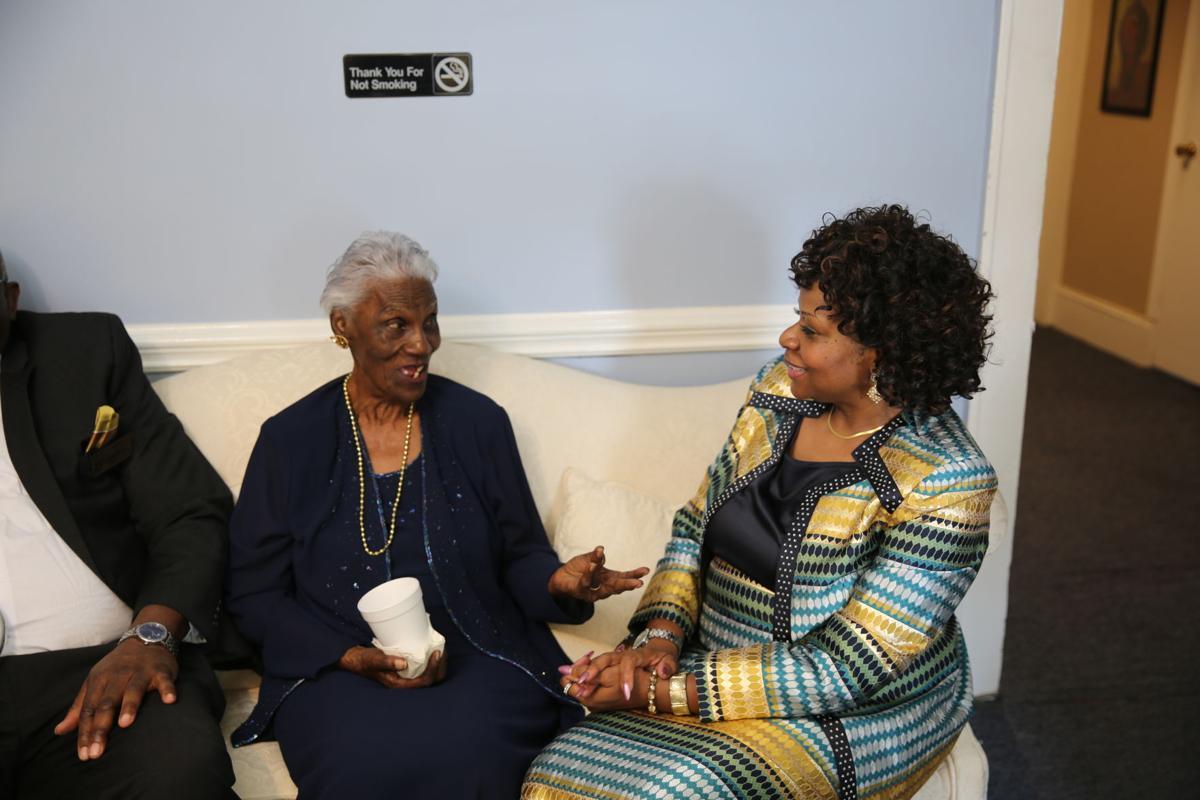 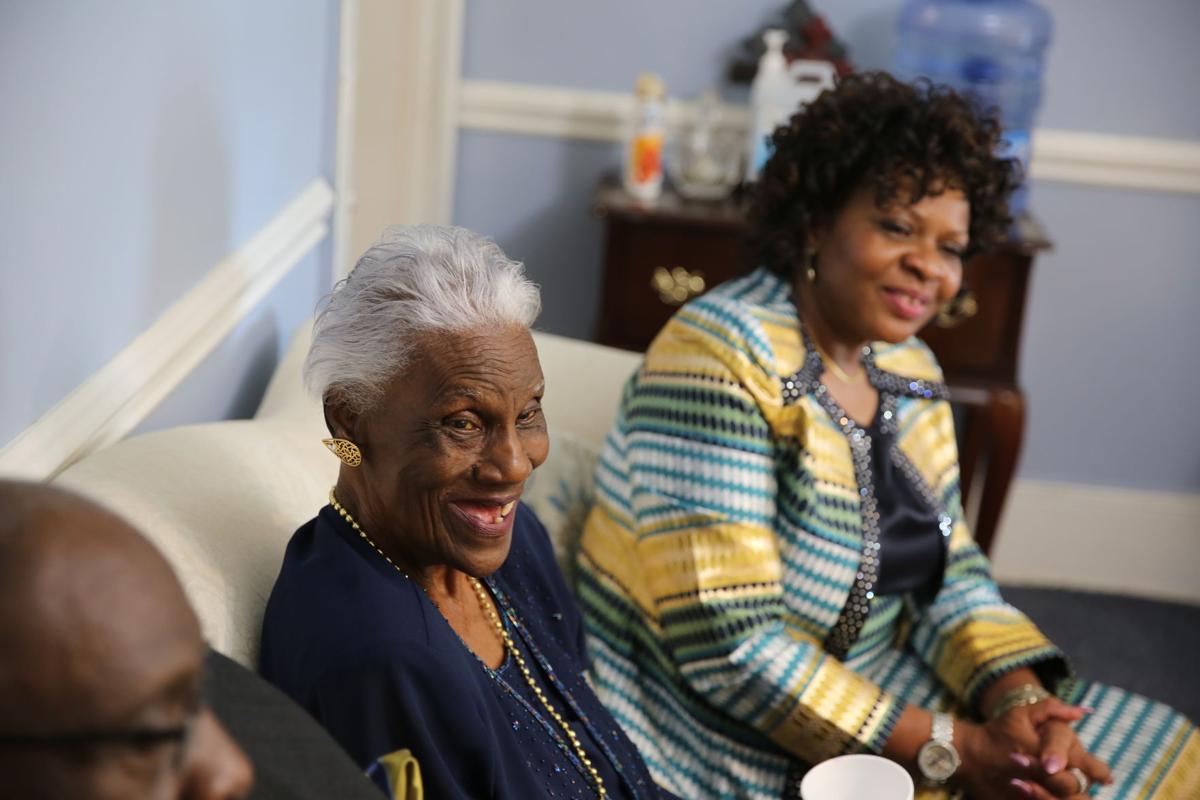 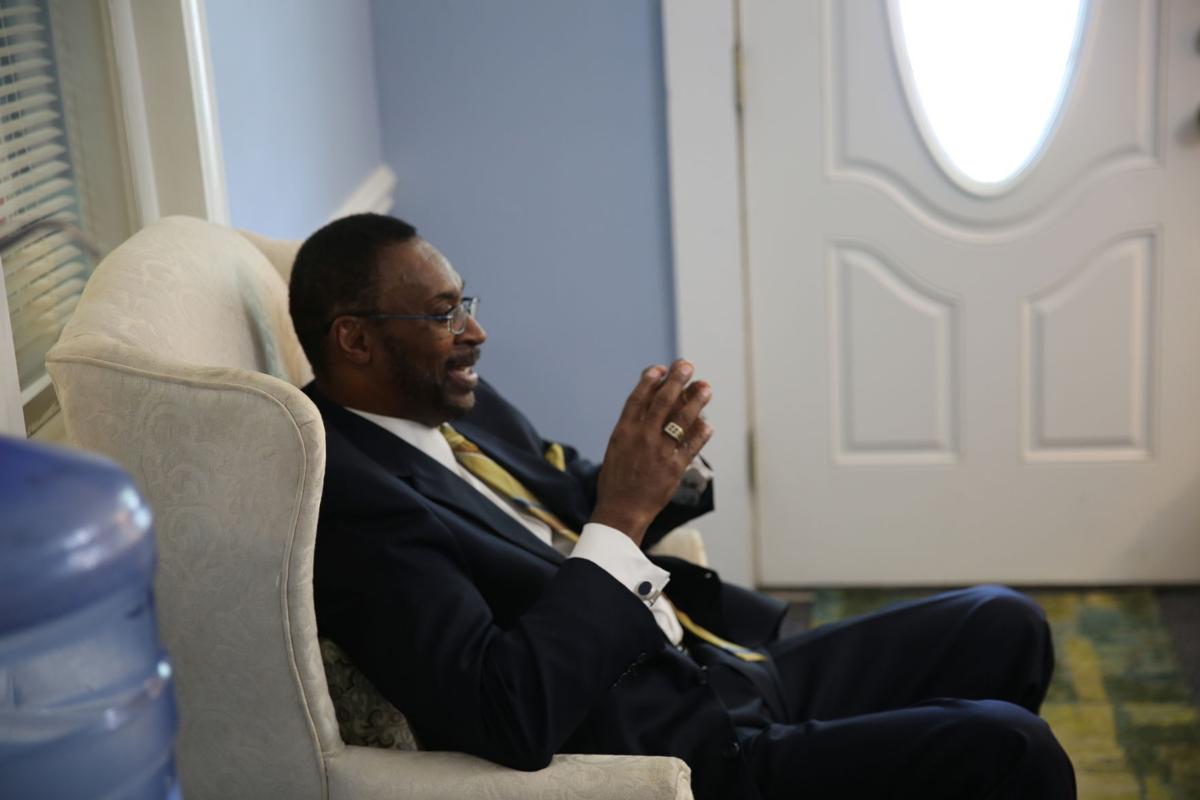 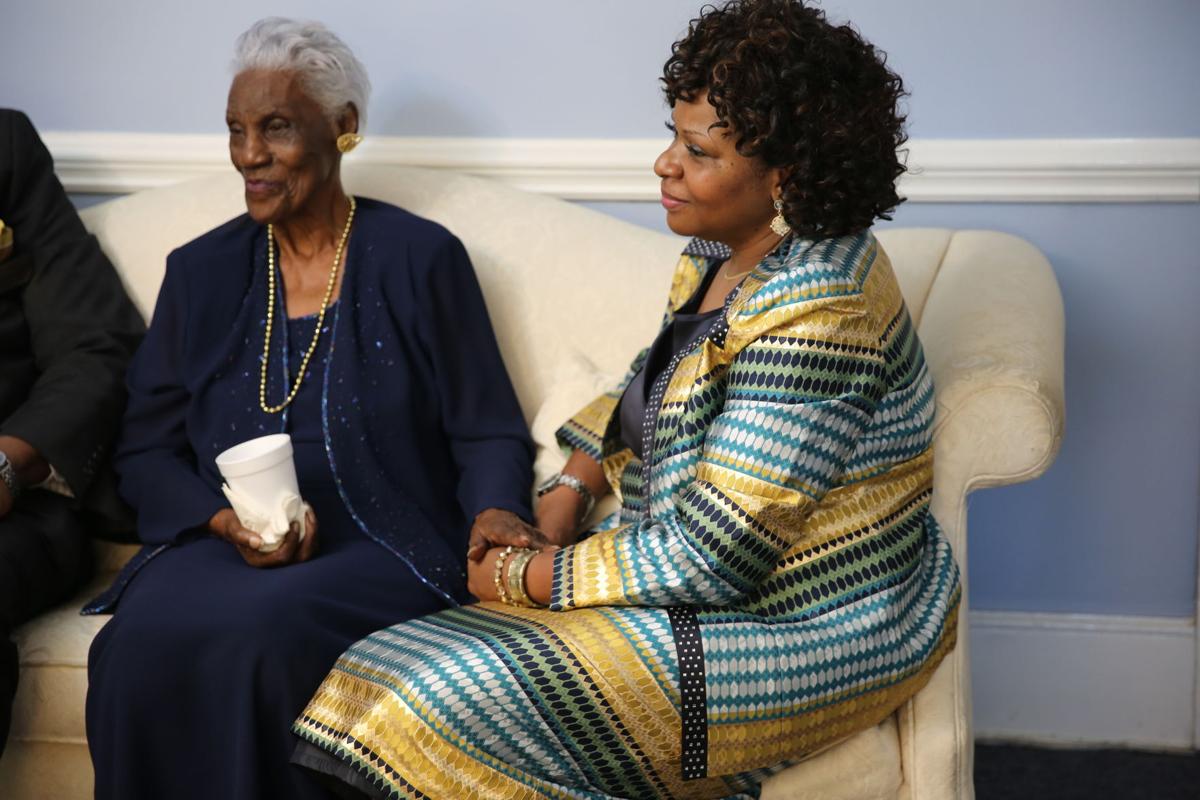 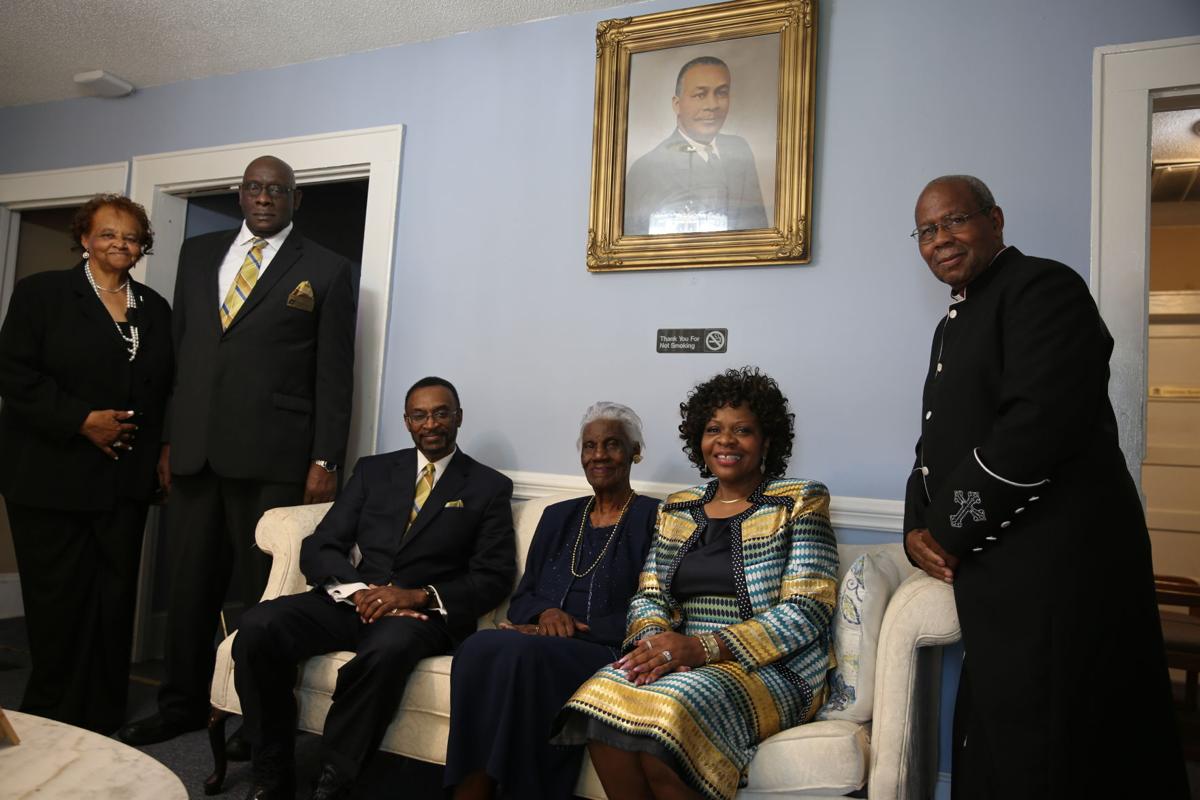 A gathering of people who have worked at W.E. Flanagan Memorial Funeral Home and Cremation.

W.E. Flanagan Memorial Funeral Home and Cremations has been at its West Fifth Street location since the late 1940s.

A gathering of people who have worked at W.E. Flanagan Memorial Funeral Home and Cremation.

Buildings don’t always need a historic designation to be recognized for the difference they have made in people’s lives.

At the corner of West Fifth and White streets stands a brick building where people have mourned loss but found comfort.

W.E. Flanagan Memorial Funeral Home and Cremations has stood at that location since 1947, when the business was relocated from the Shore Drive community.

The oldest black funeral home in Pitt County, Flanagan’s is nearing its centennial anniversary. While technology has changed how the dead are mourned and buried, the values Walter Esmer Flanagan instilled in the business remain strong.

“I learned how to be kind, to be humble. Don’t press people,” said Ellis Brown, 92, who started working with Flanagan in 1948. “It’s not about money but it’s about your service. Service is the first priority in all of it.”

Brown was a child when she first met Flanagan. When she finished school, he saw her out walking one day and asked if she wanted a job.

“I was scared of dead people,” she said, but knew an opportunity when she saw it.

At 92, Brown was the oldest licensed African American female funeral director in North Carolina until she let her license expire last year.

Flanagan saw a similar work ethic in David Hammond, who eventually became president of the business, said Esther Hammond, his daughter and the current general manager and mortician at Flanagan’s.

David Hammond was 15 years old when he first asked Flanagan for a job.

“He just saw the (funeral) cars passing in Winterville, (staff was) dressed up and he liked the way they looked. It’s what he wanted to do the rest of his life,” she said.

Flanagan hired her father to wash the funeral home’s vehicles.

“Everyone who worked with (Flanagan), he handpicked those people,” Esther Hammond said. “My father was someone he could always depend on because he would never say no.”

She remembers Flanagan as quiet, humble and distinguished but still a presence.

“Everyone always says they knew who he was but he never said anything because he was always humble,” she said.

Flanagan was born in Lenoir County in 1898. Orphaned at a young age, He worked as a painter as a teenager. As he entered his 20s, he was encouraged to start his own business.

He moved to Greenville in 1924 and saw there were no black funeral directors in the community.

“There was one black man trying to bury the dead but he was not an embalmer,” Flanagan said in an interview in the 1982 edition of “Chronicles of Pitt County — North Carolina.”

Flanagan was told that if he wanted to be a successful funeral director, he needed to become an embalmer. He went to Brown’s Embalming School in Raleigh, according to “Chronicles.”

Initially he had difficulty convincing black families to let him bury their loved ones.

“It was hard to convince our people that he was an embalmer. He had a tough time,” Brown said.

Flanagan’s kindness, the respect he showed families no matter their circumstances and his professionalism won people over, she said.

“Back then you couldn’t worry about people not having money. They were sharecroppers, only farmers,” Brown said. Flanagan would wait until they were paid for their harvest before trying to collect money for services, even if it meant waiting almost a year.

Ronnie Worsley Sr., chaplain at the funeral home, met Flanagan in the 1960s when he oversaw the services for his grandmother.

“I remember the way he came to the house and took care of everybody,” Worsley said.

In the “Chronicles,” Flanagan said the funeral business wasn’t very lucrative at first. Attorney Marvin O. Blount taught him how to build a home and use it to finance the construction of more homes.

Flanagan also launched a mutual burial association in 1939 that allowed people to pay $200 into a fund to cover the cost of their burial.

The fund was dissolved in 2019, Esther Hammond said, because most of its members had died and $200 barely covers the cost of a flower spray, much less a coffin or burial.

Flanagan and his wife, Charlotte, never had children. When he died in 1984 he left no will. Brown was appointed executor of the estate.

Brown worked with several of the funeral directors, David Hammond and Clinton Mills among them, to incorporate the business.

Esther Hammond said it was about that time that her father talked to her about becoming a funeral director.

She had never considered joining the profession because she was a military wife. But she was living in Fayetteville where the state’s only funeral services degree program was taught.

She divorced in 1998 and enrolled in the program.

After completing her studies, she trained with Ernest Perkins, owner of Perkins Funeral Home in Bethel. She drove, styled hair, oversaw wakes and took on other tasks.

She then did her apprenticeship in embalming at Rouse Mortuary Service & Crematory and received her state funeral director’s license, which gave her the legal authority to sign death certificates.

In 2006, her father stepped down from the business to serve a full-time ministry and Esther Hammond took over.

During the last 15 years, she has worked to renovate the funeral home’s chapel, which was added to the property in the early 1970s.

During the process, she found dozens of boxes of files dating back to the 1940s. The documents detail funeral arrangements and other business activity involving Flanagan.

Because of increased interest in genealogy and websites like Ancestry.com, Esther Hammond said she routinely gets telephone calls from individuals searching for details about people they’ve identified as family members.

The files have been useful in those searches and she now stores them in an air-conditioned facility.

While there are many trends in the funeral service industry, she focuses on creating dignified services.

“You never know what family situation you are going to encounter when someone passes away,” she said. “Death is final but it belongs to that family so we kind of join the family during that time period.”

Zeddie Hardy-Wilkins, Esther Hammond’s godmother and the funeral home’s chief financial officer for the last 18 months, has seen and experienced how long-lasting the compassionate care of a funeral director can be.

Before her mother died in 2019, she insisted Flanagan’s funeral home would handle her arrangements even though its founder had been dead 35 years.

Hammond said she feels lucky, because in recent years she’s had a half-dozen people under the age of 20 join her as interns or apprentices.

There’s a growing interest in the funeral service industry among young people, she said, especially among young black women.

“I’ve been wanting to train and mentor young people because they are the generation that will take us forward,” she said.

The skills these young people brought with them have proved useful during the past year as funeral homes dealt with gathering restrictions related to COVID-19.

Marvion Wilcox introduced social media into the business. By broadcasting services over Facebook, relatives and friends could grieve with the immediate family.

Esther Hammond made use of the technology when her father died in November.

“It wasn’t the service I thought would happen because we didn’t know he would pass away,” she said. “It’s still so fresh to me, the event, because we could not have everyone there who wanted to be there but they looked at it over livestream.”

This September, the funeral home will host its 100th anniversary celebration. Her uncle will be the keynote speaker, so she’s inviting family members to attend.

“We won’t have this time again. They are still here, praise God, so we want to bridge the older generation and their history with the younger generation,” Esther Hammond said.