Log In Sign Up
You are the owner of this article.
Edit Article Add New Article
You have permission to edit this article.
Edit
News
Opinion
Sports
Features
Obits
Multimedia
Local Events
Jobs
Classifieds
e-Edition
Our Sites
Extras
Share This
1 of 7 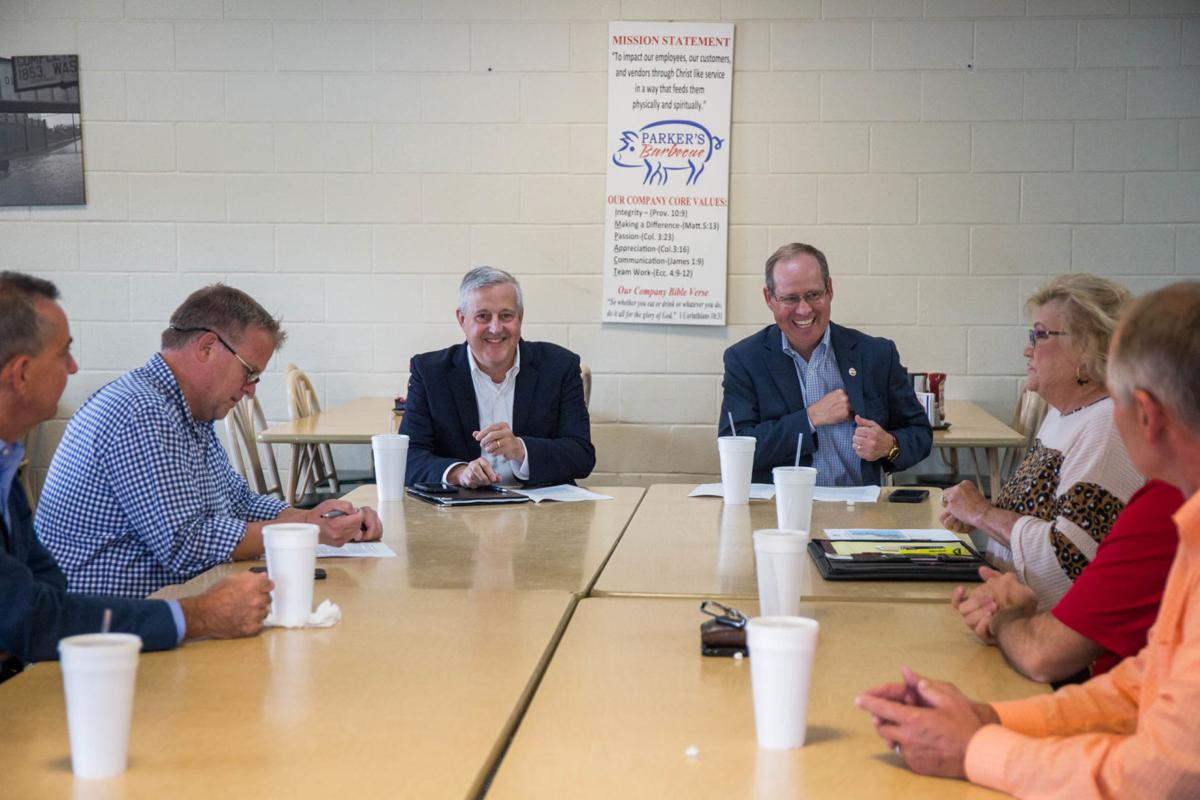 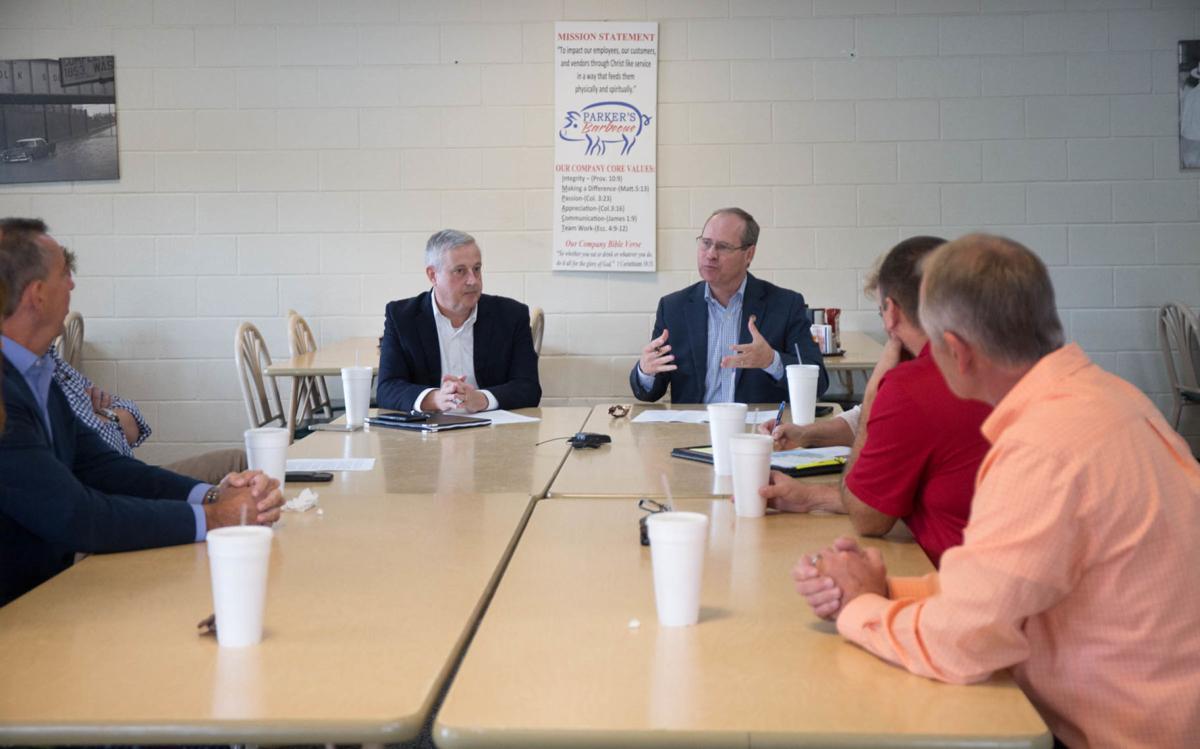 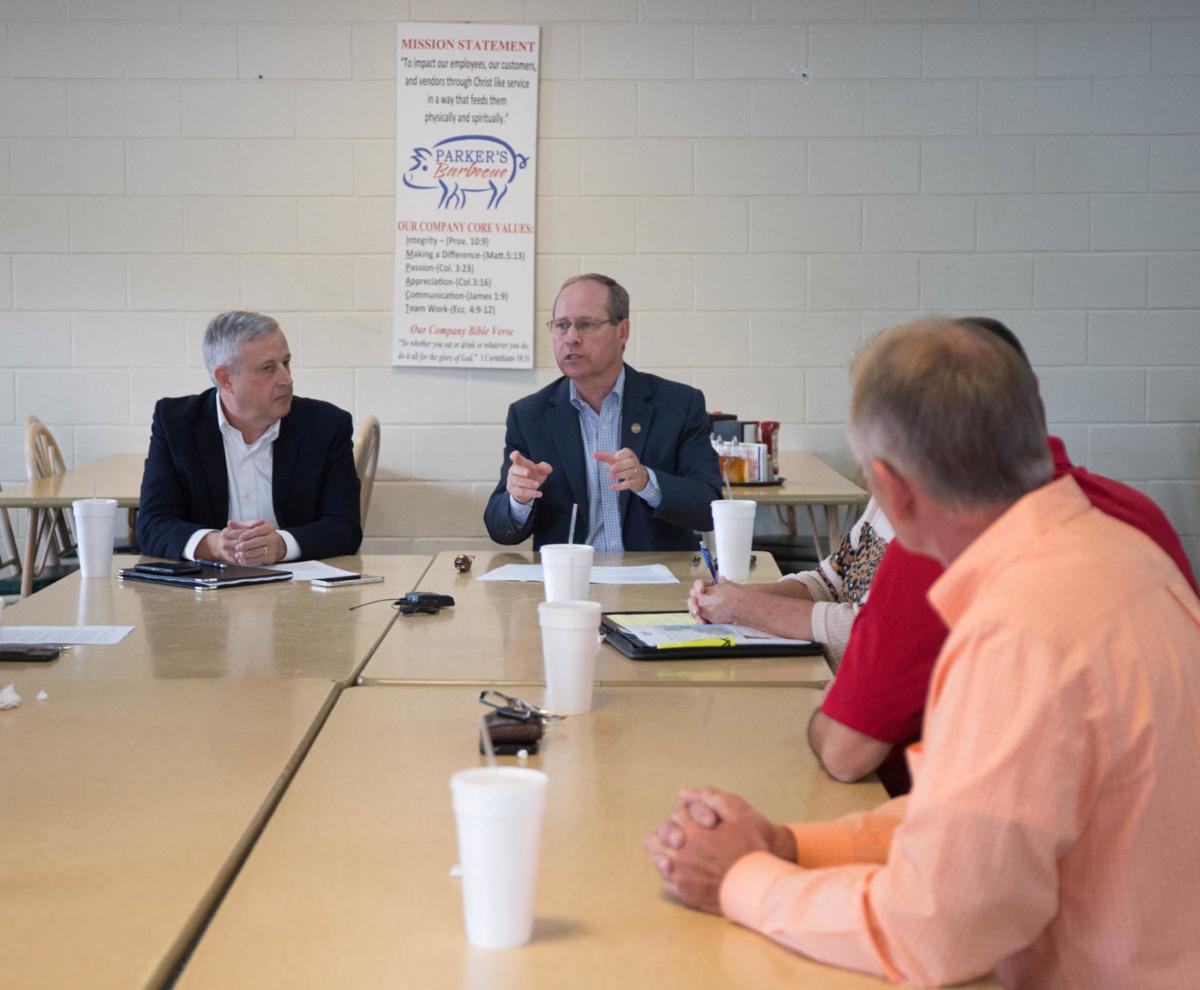 Rep. Greg Murphy discusses what is on the horizon for small business owners during a roundtable event at Parker’s Barbecue on Tuesday. 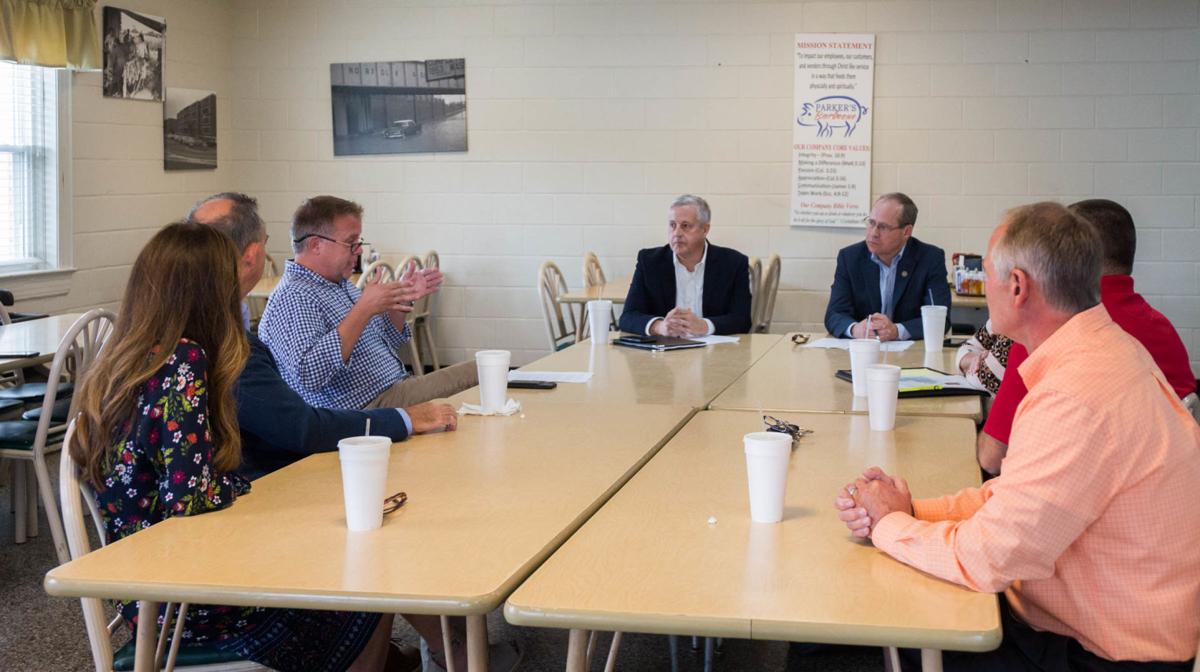 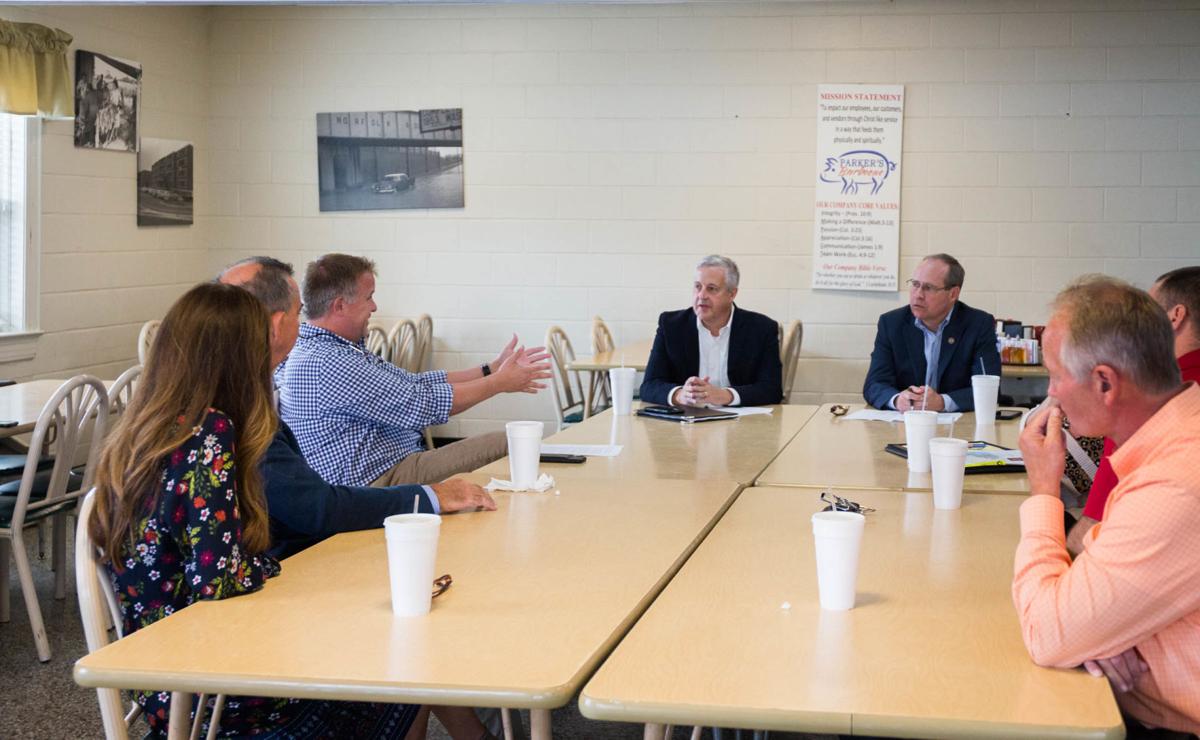 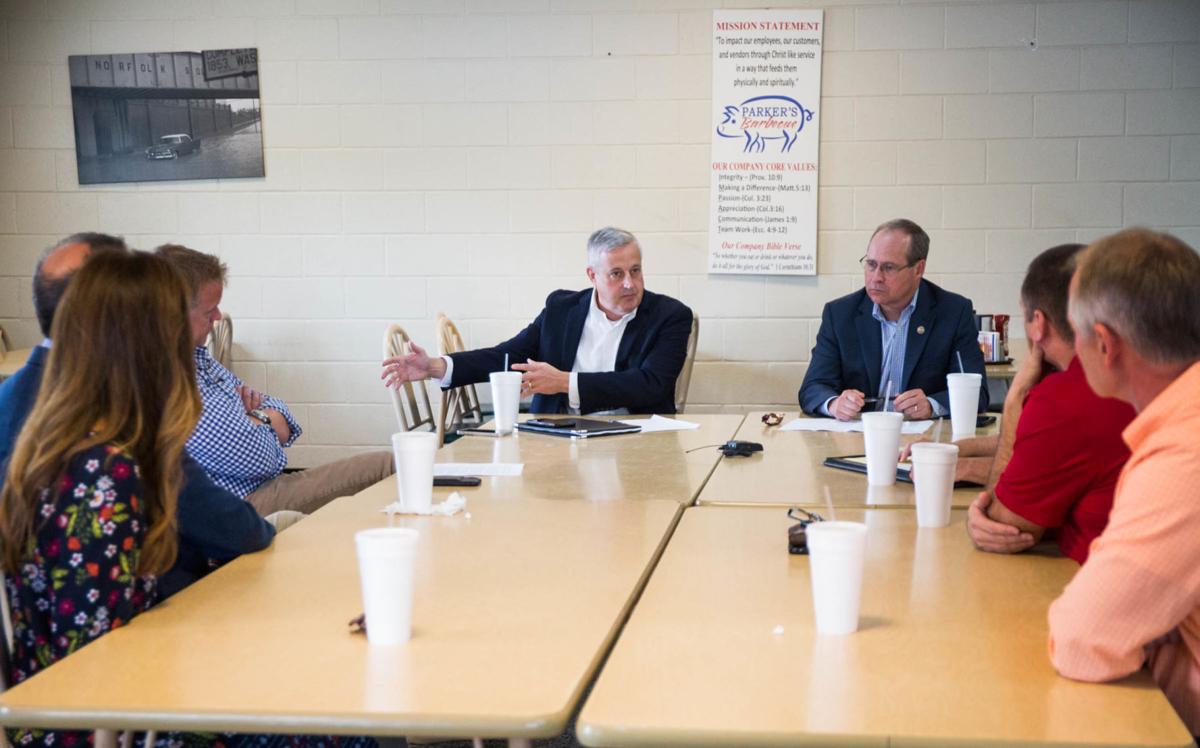 Chairman of the North Carolina Republican Party Michael Whatley speaks during a small business round table event at Parker's Barbecue on Tuesday, Oct. 12. 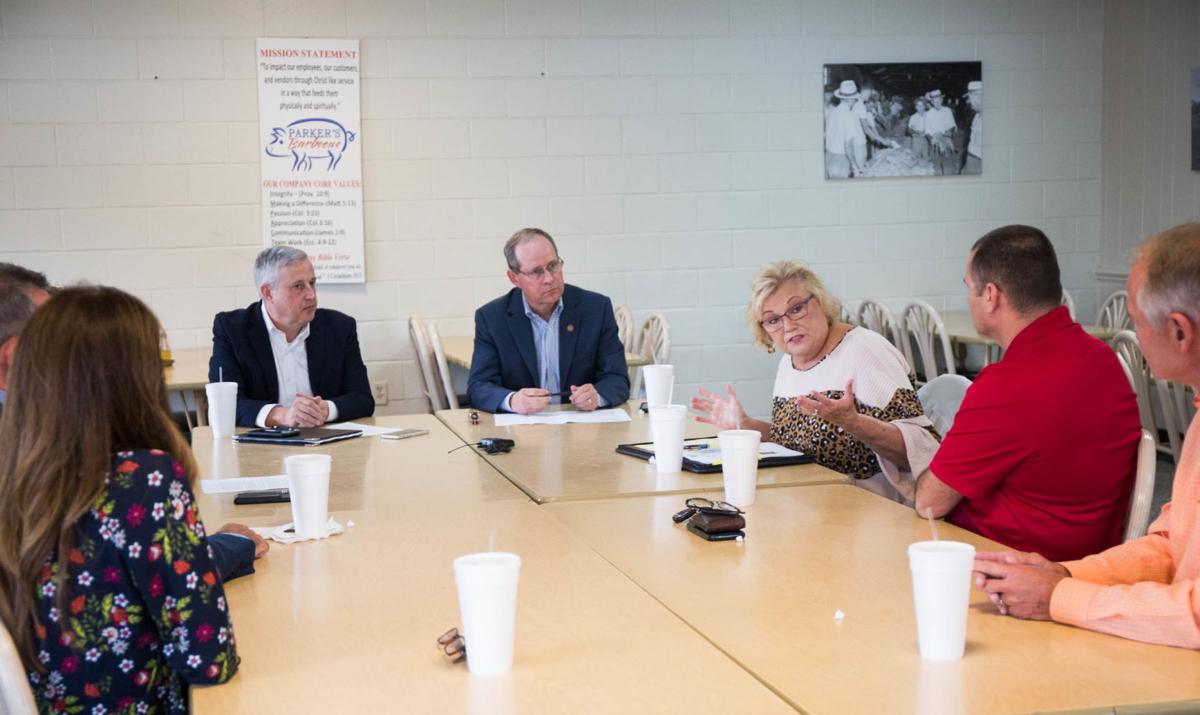 Realtor Connie Corey speaks about the real estate market during a small business round table event at Parker's Barbecue on Tuesday, Oct. 12.

Rep. Greg Murphy discusses what is on the horizon for small business owners during a roundtable event at Parker’s Barbecue on Tuesday.

Chairman of the North Carolina Republican Party Michael Whatley speaks during a small business round table event at Parker's Barbecue on Tuesday, Oct. 12.

Realtor Connie Corey speaks about the real estate market during a small business round table event at Parker's Barbecue on Tuesday, Oct. 12.

Rep. Greg Murphy and NCGOP Chairman Michael Whatley met with a handful of local business owners at Parker’s Barbecue on Memorial Drive to discuss what is on the horizon for small businesses who continue to be hit hard by supply chain issues and staffing shortages in the food service, real estate, retail and fitness businesses.

Greene and business owners like Billy Parker of Parker’s Barbecue told Murphy, Whatley and other assembled business owners that they raised their wages in the face of staffing shortages to little avail. Positions that once were in high demand have not even received applications according to Greene.

Concerns continue at the same time as Biden aims to sign a $480 billion increase in the country’s borrowing ceiling this week. Earlier this month, Biden said that he reluctantly expected his proposed $3.5 trillion package of social and environmental initiatives will be somewhere more in the ballpark of $1.9 trillion and $2.3 trillion, the Associated Press reported.

Part of Biden’s social approach would require paid family and medical leave; extended tax breaks for families with children, low earners and those buying health insurance; expanded Medicare coverage; and free pre-kindergarten and community college. The money is expected to come in part from a tax on the wealthy and corporate America.

“There has been a lot of talk now about tax increases,” Murphy said. “When you cut taxes people actually have more income to spend, you generate this and they pay more taxes, but now there has been talk about … massive tax increases. Inflation is a tax increase on the poor. They have to pay their income to go across town to buy a cheeseburger to do anything. By these economic policies, some of which are not to blame but some of which are, with out of control spending being one of them, inflationary pressures rise and you hurt the poor disproportionately.”

Those assembled worried that such increases would just make things harder on their businesses.

“It exacerbates the problem that we are already in,” Parker said. “Especially in restaurants, the margins are very thin in restaurants, the only thing less is grocery stores who have very thin margins. In our business now, our margins are being compressed so much with an increase in wages, food inflation. Your cost of goods is exponentially higher than it was. At that point in time, you are profiteers. You can’t raise prices enough to cover costs and keep your business.”

“A tax increase for family owned businesses like ours is brutal. It would be brutal,” Parker said.

Todd Browder, a co-owner of Pirate Popcorn and former CFO, said that taxing corporations is not the answer.

“There seems to be this phenomenon that corporations are just rich,” Browder said. “They really have a target return of around 10 percent. You have to have a 10 percent return to get people to invest in your corporation. Without that return, no one is going to invest in your business. If you raise taxes, that is just one more expense to overcome.”

Murphy said that, on a federal level, supply chain issues are not being addressed. He said that the pandemic revealed that as a U.S. weakness.

“I wish I could say there were good things being done about supply chain issues,” Murphy said. “One of the silver linings of the pandemic was it showed our dependence on foreign nations, many of who are not our friends, especially China. So much of the issue has been a lot of regulation. We are not getting the people, we do not have people in the ports to offload ships. We are seeing that on the West Coast right now.”

“The problem lies in philosophy. Do you add more government to it, or do you decrease the regulation so things can run more smoothly?”

Ellie Dougherty, a spokeswoman for the North Carolina Democratic Party focused on localizing Biden’s agenda in N.C., said that Murphy and other Republicans cutting taxes for the wealthy is not in the interest of Americans.

“Despite complete and total opposition from Republicans, including Congressman Greg Murphy, President Biden and Democrats passed the American Rescue Plan that spurred economic growth, provided critical aid to small businesses, created over four million new jobs and lowered costs for families,” Dougherty said in a statement. “The Build Back Better package will cost zero dollars, won’t add a penny to the deficit, and will improve the lives of working families in North Carolina and across the country.

“That stands in stark contrast to Republicans’ $2 trillion dollar tax cuts for corporations and the wealthiest Americans at the expense of middle class families. The GOP has repeatedly proven that they have no interest in serving North Carolinians and the American people. It’s clear, while Congressman Murphy and Republicans obstruct, Democrats continue to deliver.“

Murphy, a physician, also said that the pandemic is being used as a scapegoat by Democrats who seek to cover up economic issues. So far over 715,000 Americans have died from COVID-19. As of Tuesday, 17,223 of those deaths were in North Carolina, with 138 dead in Pitt County.