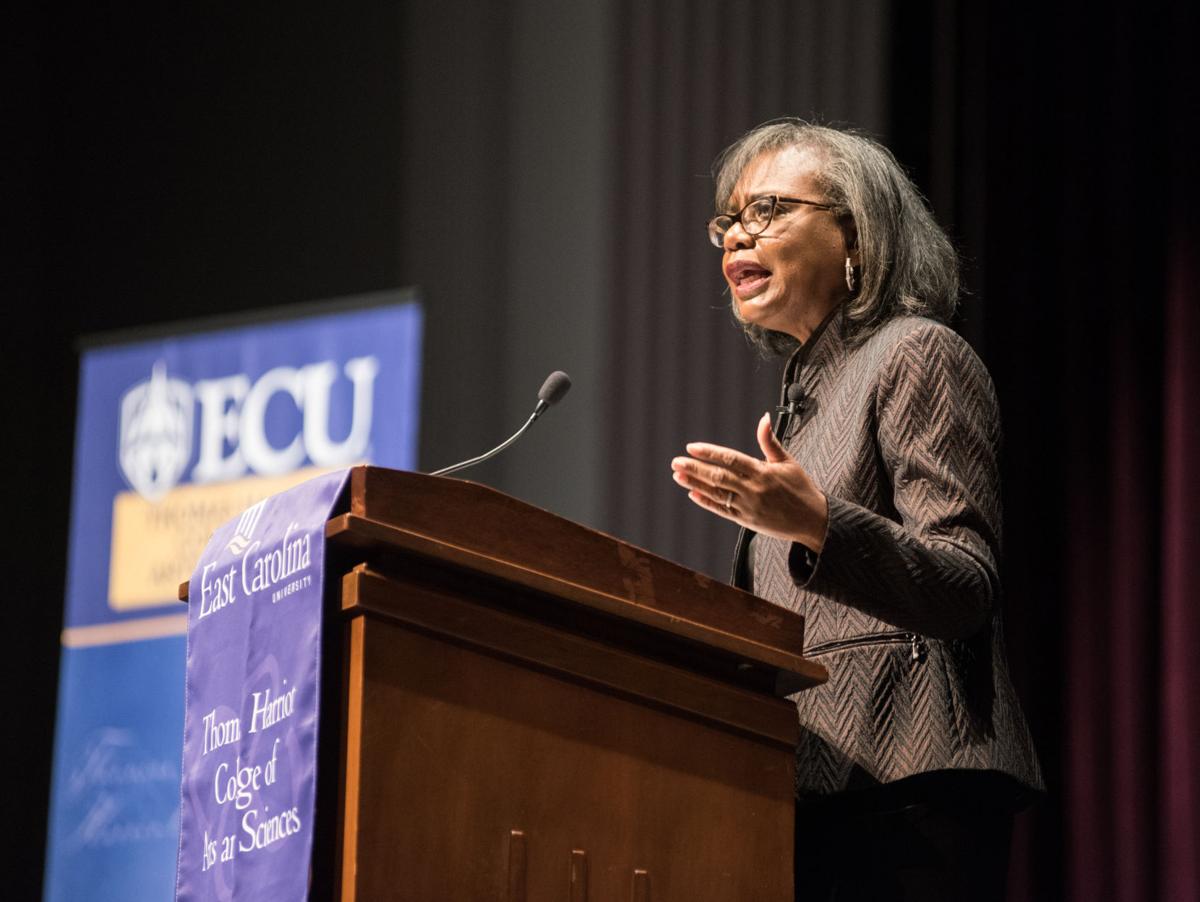 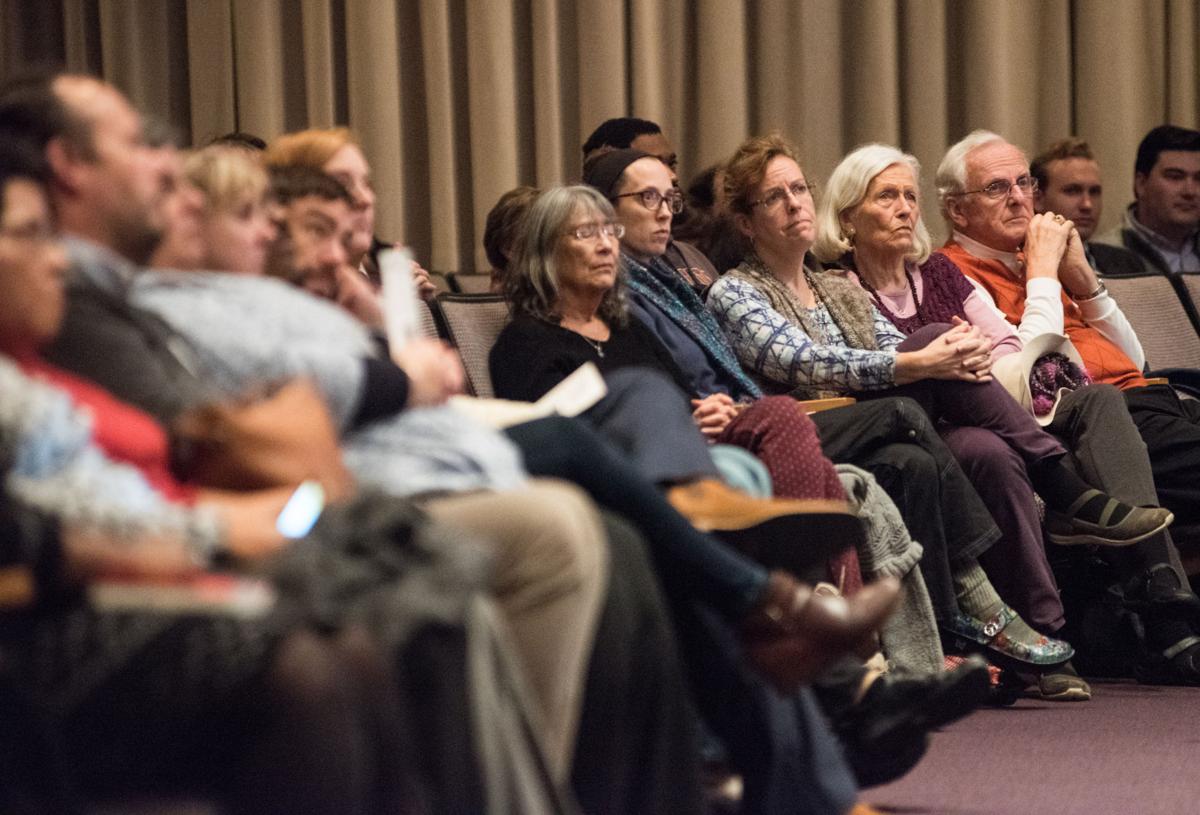 People listen to speaker Anita Hill as a part of the Voyages of Discovery series in Wright Auditorium at ECU on Nov. 15, 2018. (Molly Mathis/The Daily Reflector) 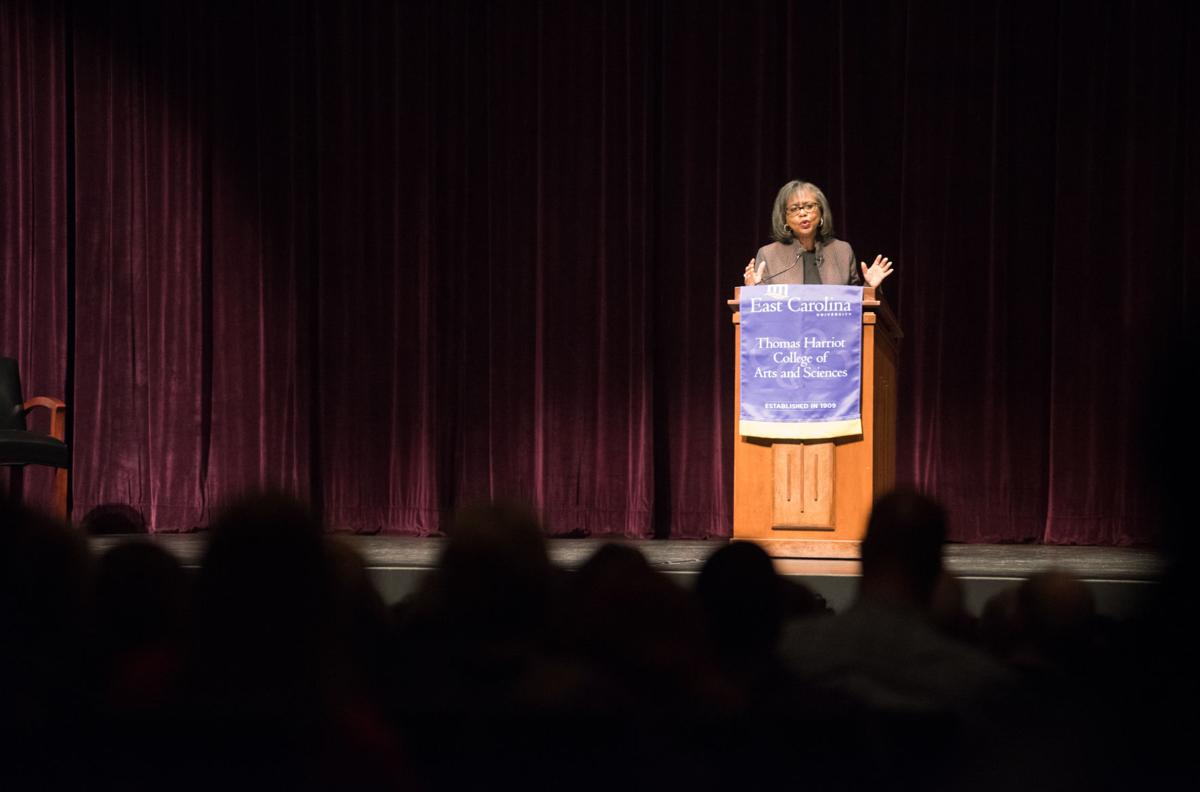 People listen to speaker Anita Hill as a part of the Voyages of Discovery series in Wright Auditorium at ECU on Nov. 15, 2018. (Molly Mathis/The Daily Reflector)

America is ready to combat sexual harassment and assault, said the woman who became an early public face in the fight, but communities must support accusers.

Hill was greeted with cheers and a standing ovation from hundreds who gathered at Wright Auditorium.

“I am always hopeful and I believe I have a good reason to be hopeful,” Hill said. “I see a difference in the American public.”

Hill came to national prominence in 1991 when she testified at the confirmation hearing of current U.S. Supreme Court Justice Clarence Thomas. Hill said Thomas sexually harassed her and endured questioning by U.S. Senators who she said tried to portray her as hypersexual and mentally unbalanced.

Hill, who continued her fight for women’s civil rights, returned to the national spotlight this year when another woman, Palo Alto University Professor Christine Blasey Ford, testified that now-Supreme Court Justice Brett Kavanaugh sexually assaulted her when they were in high school.

Hill said there were many similarities in the way some senators attacked Blasey Ford’s credibility. However, unlike 1991, the Senate committee included women and minorities.

Looking out at the audience — a mix of students, faculty and community members, young and old, women and men, multiple nationalities and racial groups — Hill reflected on how the community felt like a microcosm of society.

Like the rest of society, the community is attuned to issues of sexual harassment and sexual assault, she said.

“I don’t want to be like the elderly relative in your home on Thanksgiving, ‘When I was your age …,’” Hill said. But people need the context of the past to understand the advances that have been made and the work that still needs to be done, she said.

Prior to the passage of the 1964 Civil Rights Act little to no thought was given to sexual harassment in the workplace, Hill said. Sociologists did not study the issue and legal experts did not see it as an issue to be pursued.

It was not until Redbook magazine published an article in the 1970s that showed that nine out of every 10 women in the workplace had been subjected to sexual advances that the topic gained attention.

Throughout the 1970s and 1980s, women started suing their harassers and the companies that permitted such behavior. Judges at the time typically considered the suits personal — not legal — matters and often ruled against the women.

Sexual harassment is typically viewed through the legal doctrines of “quid pro quo,” expecting something in return for a favor, or hostile environment.

Harassment cases wound their way through the appellate courts and in 1986 the U.S. Supreme Court ruled sexual harassment was the violation of a woman’s civil rights. The ruling came nine years after a suit been filed. Throughout the process, plaintiff, Michelle Vincent testified time and again that starting when she was 19-year-old intern, she was told the only way she could advance in her career was to have sex with her supervisor, which she did 60 times.

Even with this ruling, it took the Equal Employment Opportunity another decade before it put together rules and guidelines for handling sexual harassment allegations, she said.

Under Title IX, institutions in the late 1990s were put on notice that rules were being put in place for filing sexual harassment or assault complaints. The guidelines were enacted in 2011, she said. An effort is underway to roll back the guidelines.

Hill is chairwoman of the newly formed Commission on Sexual Harassment and Advancing Equality in the Workplace. She also is spearheading a project to revive awareness of Title IX, the law that has been crucial in mandating equal education and employment opportunities for women.

Hill said she did not set out to start a national conversation about sexual harassment. But she was deeply concerned that Clarence Thomas’ appointment to the Supreme Court would harm its integrity so she appeared. And she had to listen to Sen. Orrin Hatch accuse her of plagiarizing portions of her testimony from the novel “The Exorcist,” Sen. John Daforth imply she was hypersexulaized and mentally imbalanced, and hear Sen. Alan Simpson say she would face “real harassment” if she testified.

But there was progress afterwards, Hill said.

Segments of the African-American community criticized Hill for reportedly airing “dirty laundry,” she said. But within days of her testimony 1,600 African-American feminists raised $50,000 to purchase a full page ad in the New York Times supporting Hill with a proclamation, “African American Women in Defense of Ourselves.”

Now with the #MeToo movement and the testimony of Blasey Ford, Americans are ready to confront the issue of sexual harassment and assault on college campuses, in the workplace and the greater community, Hill said.

Making a difference requires people willing to stand up and say they want change in their institution, she said. It requires people to remove abusers from their positions, no matter how powerful they are or how much money they bring to that institution.

“We need to take these conversations into all settings, not just in work or school but also religious institutions, places were values and ethics are discussed,” she said.

Men also have to be brought into the discussion and given space to discuss their own experiences of abuse. For other men, she offered, “if you do get involved, don’t try to run things … get involved and learn from these experiences.”

Hill also reminded the audience that change is often unpopular. Polling in 1964 showed that if the Voting Rights Act had been put to popular vote, it would not have passed.

An audience member asked if Hill had spoken with Christine Blasey Ford, saying she was the one person uniquely qualified to offer her comfort. Hill disagreed.

“I think the best people to give comfort are the loved ones closest to you,” Hill said. In 1991, Hill’s mother fulfilled that role. “Have someone that will look into your face and reflect the good back onto you,” she said. “Your gift to any survivor you know is to be that person.”