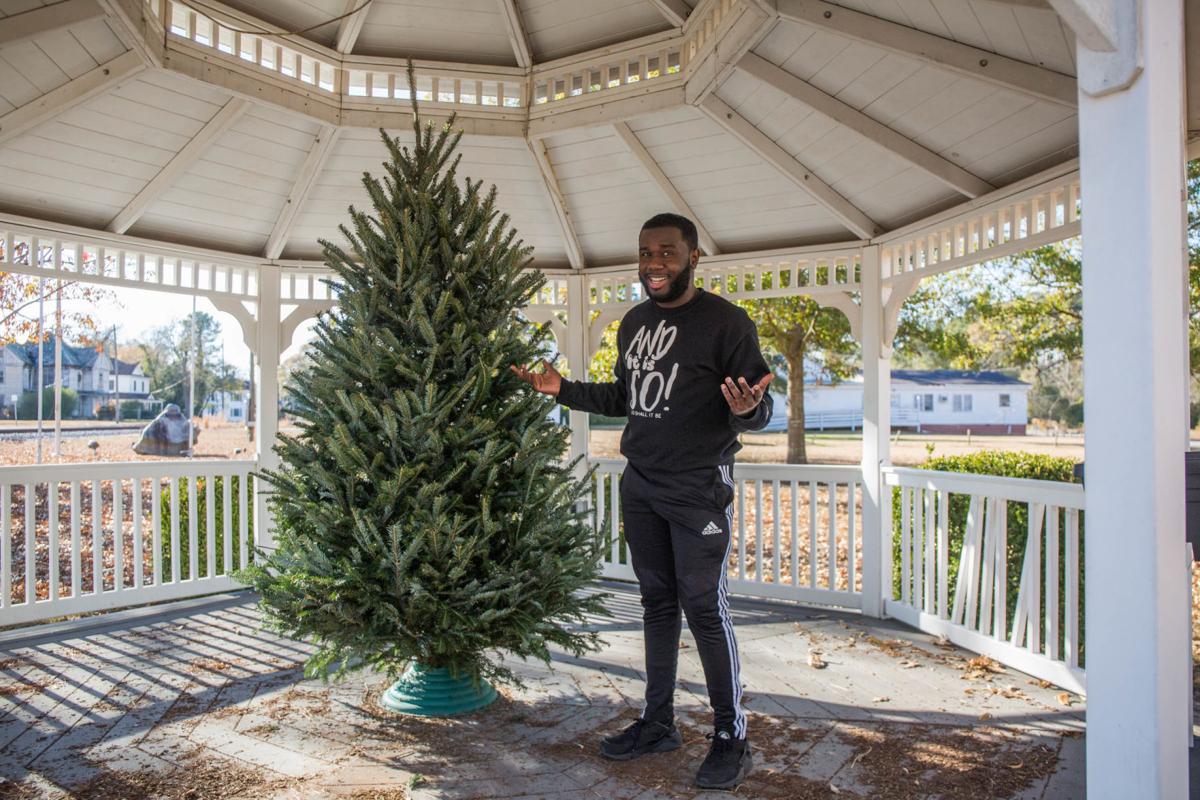 This year Davonte Jones took on the task of organizing and enlarging Bethel’s Christmas festivities. The event will include the town’s first-ever tree lighting ceremony at 6 p.m. Friday. “It’s all about community and unity,” Jones said. 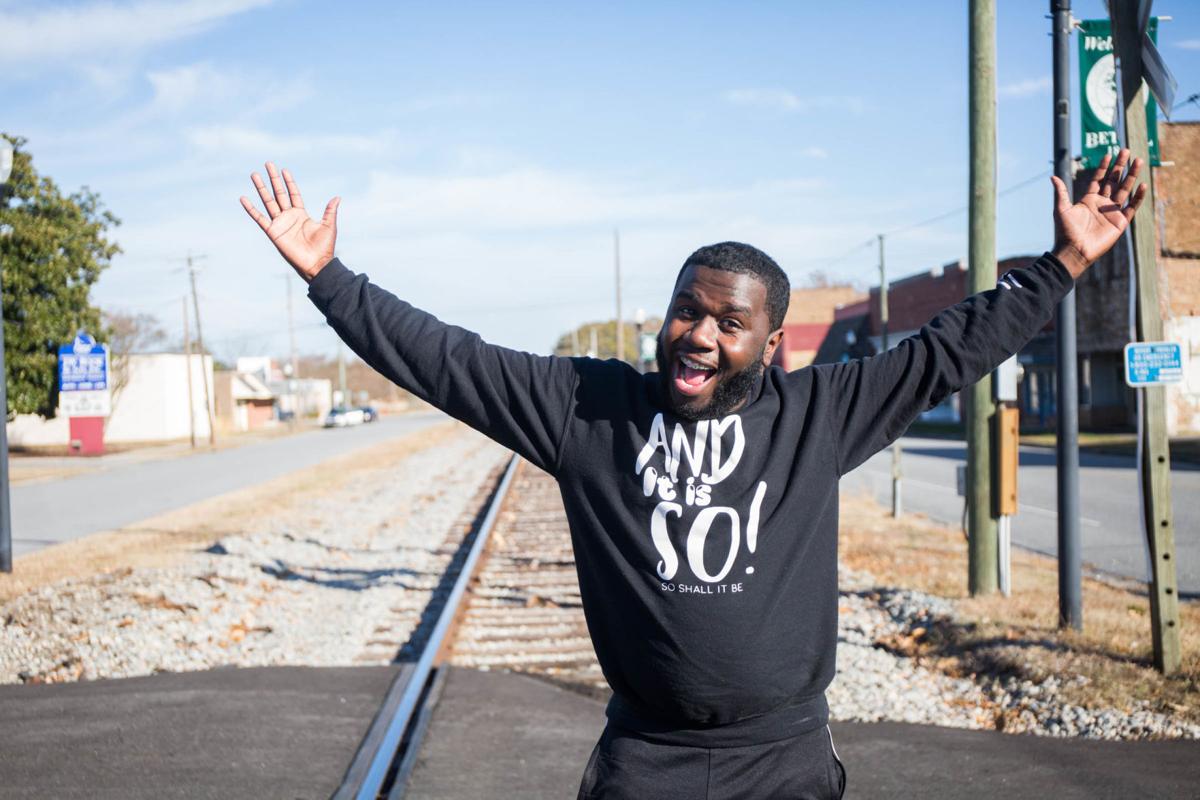 Davonte Jones, 25, a Bethel native, poses by the railroad tracks near the center of his hometown, sporting a shirt from his clothing line. 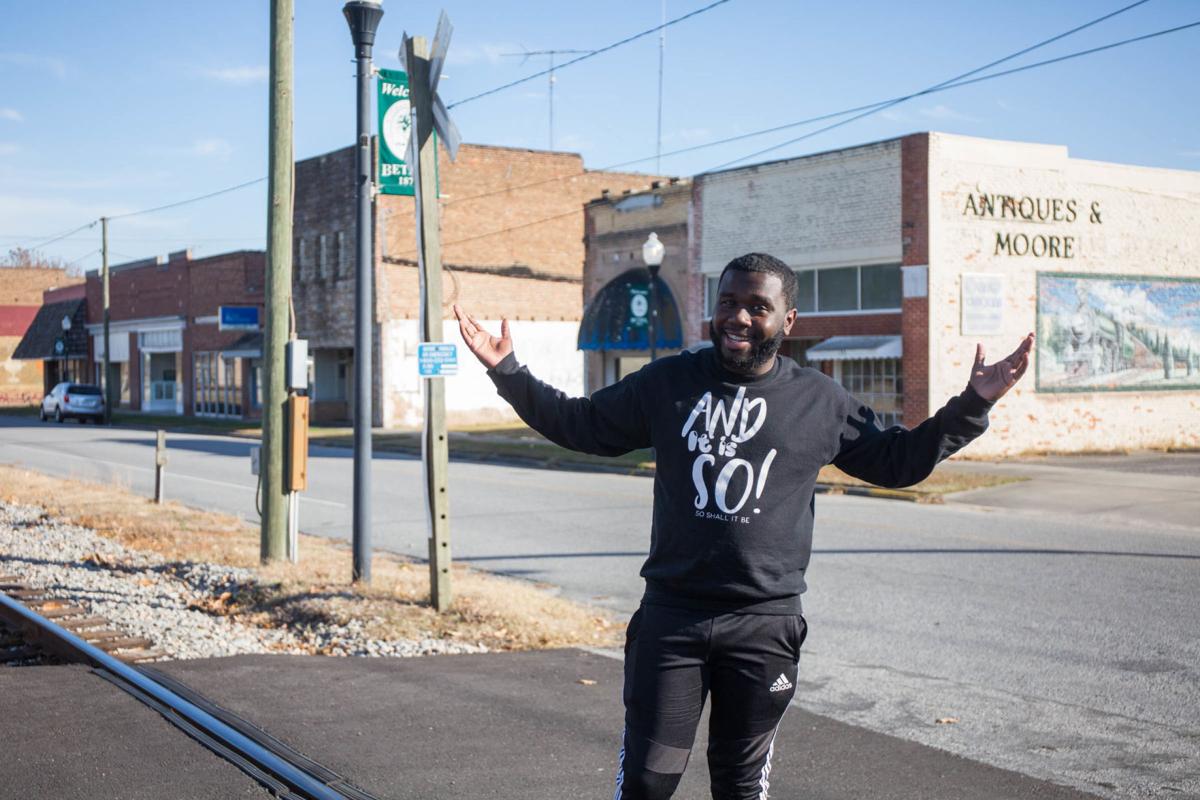 This year Davonte Jones took on the task of organizing and enlarging the Bethel Christmas parade.

This year Davonte Jones took on the task of organizing and enlarging Bethel’s Christmas festivities. The event will include the town’s first-ever tree lighting ceremony at 6 p.m. Friday. “It’s all about community and unity,” Jones said.

Davonte Jones, 25, a Bethel native, poses by the railroad tracks near the center of his hometown, sporting a shirt from his clothing line.

This year Davonte Jones took on the task of organizing and enlarging the Bethel Christmas parade.

When social media comic Davonte Jones talks about having 62 entries for this weekend’s parade in Bethel, population 1,700, folks may wonder if it’s one of his DeeBoy12 video pranks. But he wasn’t joking when he approached the mayor earlier this fall about restarting the town’s Christmas parade.

The #AndItIsSo catchphrase, a nod to his Christian upbringing, has become synonymous with the 25-year-old Bethel native, who uses it in his clothing line and as a seal of approval of sorts for his online restaurant reviews. It symbolizes Jones’ belief that what he is hoping to achieve will come to pass.

That’s exactly what appears to be happening in Bethel, which is preparing for its first Christmas parade since 2019. Dozens of entries, from the South Central High School marching band to churches, Girl Scouts and dance teams have signed on for the Saturday morning event in northern Pitt County. Also on the calendar are Bethel’s first-ever tree-lighting ceremony on Friday and a Downtown Christmas Extravaganza on Saturday, with music, food and vendors.

“A lot of people are not in the holiday spirit,” said Jones, who is working with Partnership CAREE and about three dozen volunteers to help host the “Tis the Season” events. “We want to be a light in Bethel and to tell people that there is still hope.”

Earlier this fall, Mayor Gloristine Brown was not sure there was hope for a Christmas parade this year. Bethel, like many communities across the country, canceled last year’s event due to COVID-19.

But even after transmission rates for the virus fell, this year’s parade was beginning to look a lot like canceled Christmas. Hometown Bethel, a group responsible for organizing the parade for several years, had disbanded.

“We really didn’t have anybody in the community that was ready to step up to say, ‘OK, let’s get this parade going back,’” Brown said. “Davonte called me and said, ‘Mayor Brown, we want to do something.’”

Although she thought October seemed too late to start planning a parade for early December, Brown was hesitant to say no. She had known Jones since he was a child, and she knew he had a passion for his community.

It is not the first time Bethel residents have had to work to restart their Christmas parade. Brown recalls that the town went years without such an event until former mayor Mike Whitehurst helped to get things going.

“Mike would say anybody and everybody and whatever,” said Brown, who has served as mayor since 2014. “He said if you have a chicken and you want to put a leash on it, you could walk it in the parade.”

Jones had a few different ideas what he thought might fly, but he did want the event to be inclusive. Organizers agreed early to follow the town’s tradition of waiving entry fees so those who wanted to join the parade could.

“The reason why is because I want to give business owners an opportunity to advertise their business,” Jones said. “It’s a lot of hurting people out here, not only in Bethel but just in surrounding areas.”

He also wanted to do more than toss candy along the parade route; Jones envisioned providing gifts for children. Tonya Foreman, founder of Partnership CAREE (Citizens Advocating for Racing Equity and Equality) joined the effort, helping him surpass the goal of more than 300 gifts to be distributed Saturday.

“That was one of Davonte’s visions, to be able to put something in the hands of the youth that were coming out to participate in the parade,” Foreman said, adding that making that vision a reality has been a community effort. “He has a sincere love for the community, and he wants to be a part of the solution for this area. He has been consistent with that in action.”

His serious civic goals might come as a surprise to people who have only seen Jones as DeeBoy12 on TikTok and Facebook Live, where his social media followers have watched him pull phone pranks or other shenanigans such as driving through Chic-fil-A and asking to pick up his order of holiday collards (which are not on the menu). His most watched video came in March 2020, when he burst into song (and shouts) after tasting a Wendy’s chicken and honey butter biscuit.

Jones, who was working for a different fast-food restaurants at the time, said the video got him fired, but it eventually led to the launch of his DeeBoy12 production company. Since then, his online restaurant reviews have begun generating income.

Foreman, whose work with Jones had centered on organizing community events, was unaware of his social media persona until a recent lunch meeting at Coffee + Spice on Fifth Street.

“He’s a fun-loving guy in general, but I had not seen that part, the food critic,” she said, laughing. “I was amazed. He turned a Christmas carol into a song about the chicken and waffles that he was eating, and he did it in the moment, impromptu. … I was blown away.”

This weekend’s Bethel Christmas parade is also expected to be a bit improvised, since the event was put together too quickly for most participants to build a float. Still, Brown is excited about the festivities, which are a bit bigger than what the town has hosted in recent years.

“Davonte took this and went to a whole new level,” she said. “He was determined to do something for his town and to bring the people together and just have a good time around the holidays.

“I’m really proud of him,” Brown said. “There is a serious side to him when it needs to be.”

Bethel’s Christmas tree lighting will be held at 6 p.m. Friday on Railroad Street. The Christmas parade will begin at 10 a.m. Saturday along Main Street. A Downtown Christmas Extravaganza will follow from 11 a.m. to 2 p.m.