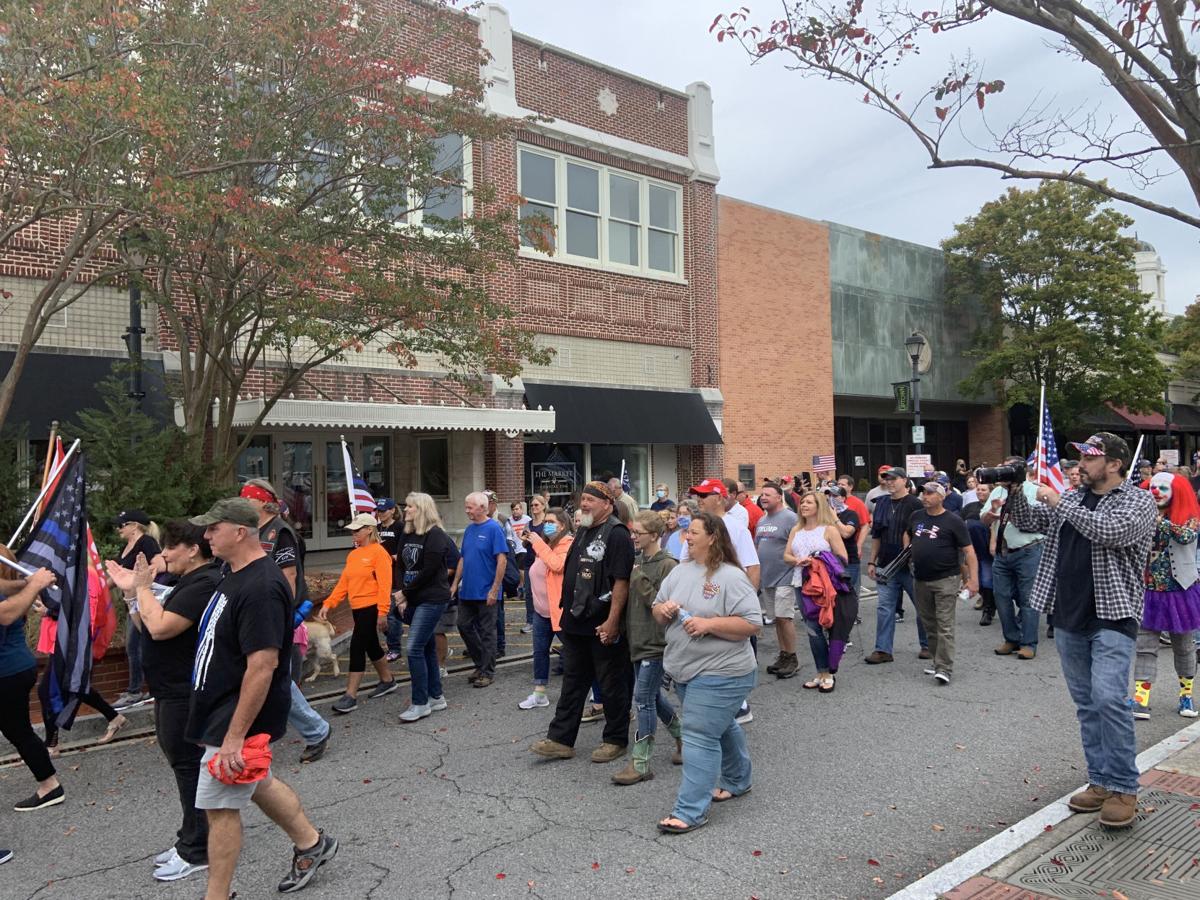 Led by a man playing bagpipes, the law enforcement supporters marched through downtown chanting “Back the Blue” and “USA.” 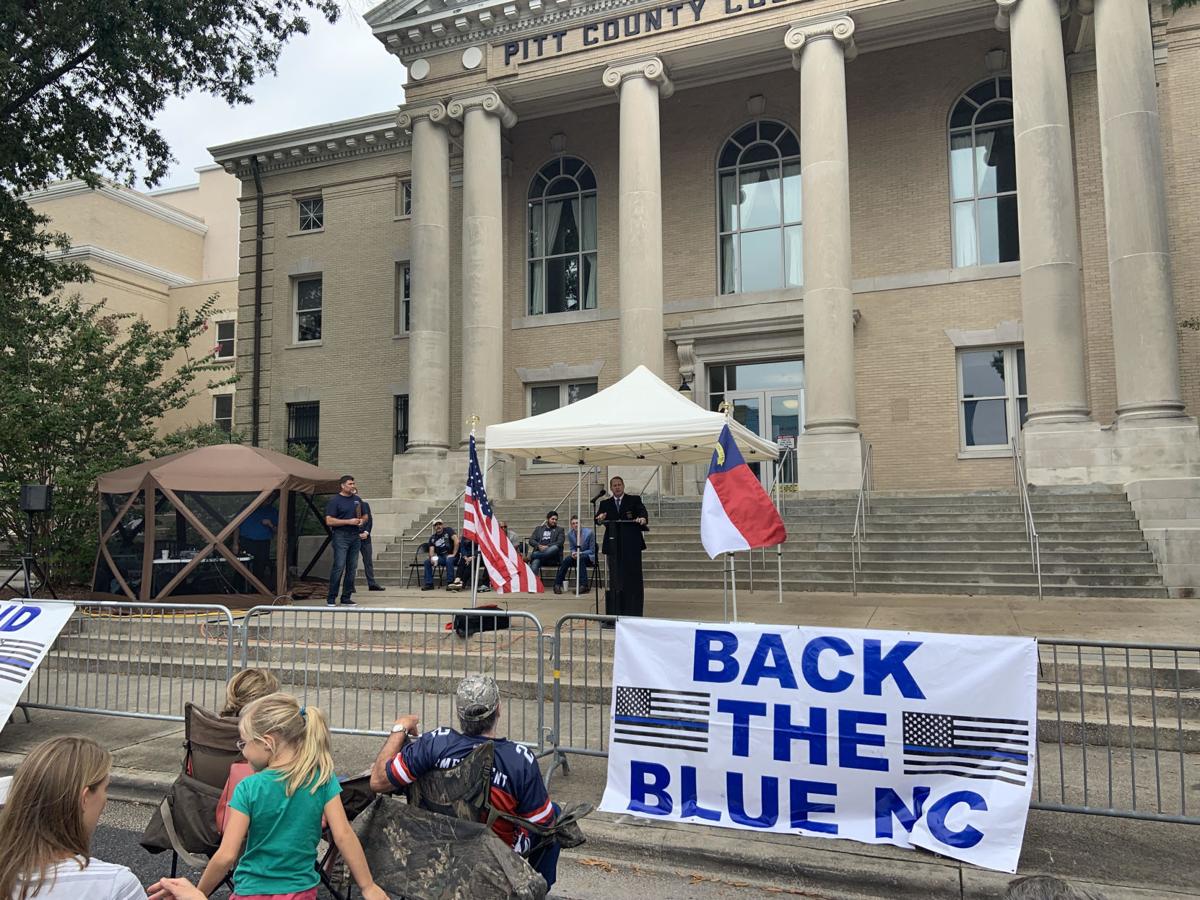 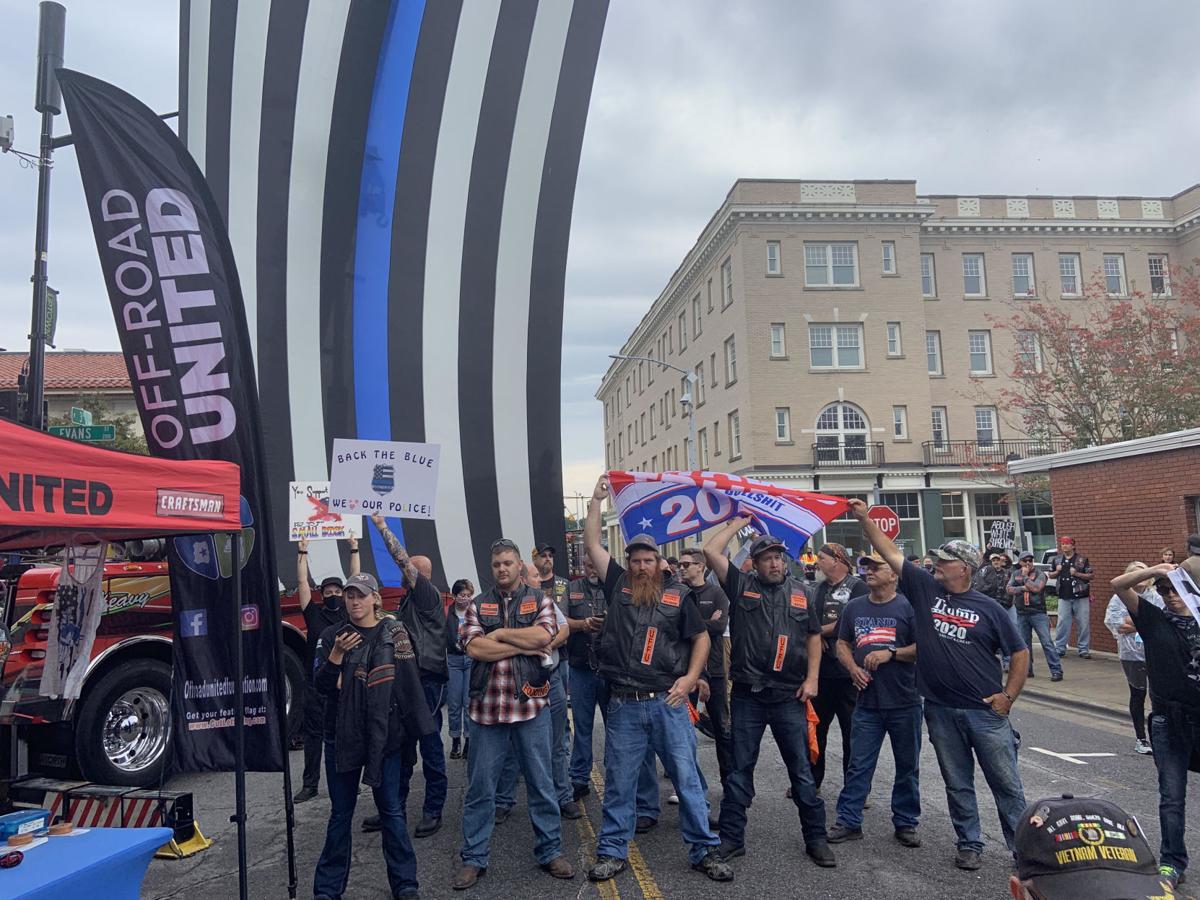 Attendees stand in front of protesters to block their signs. 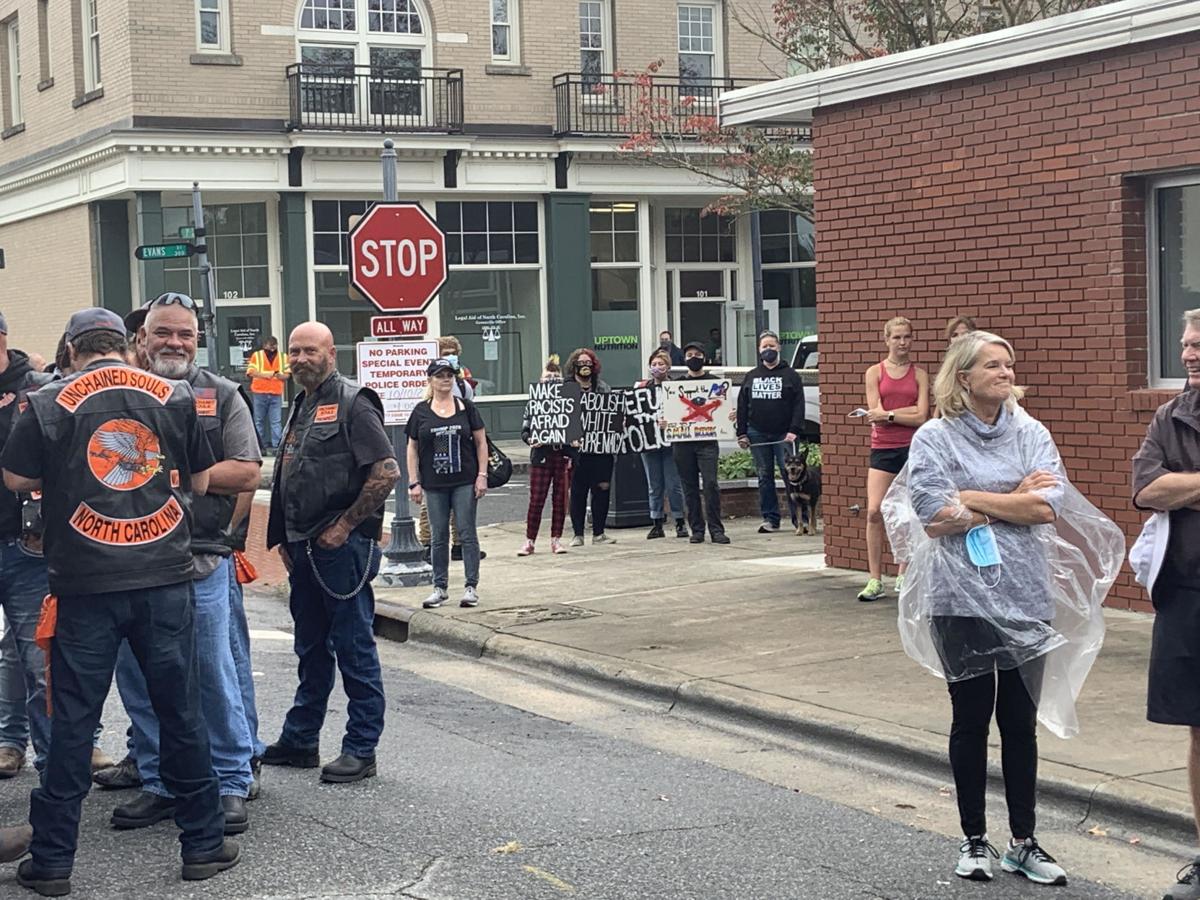 A group of protesters hold signs at Saturday's event. 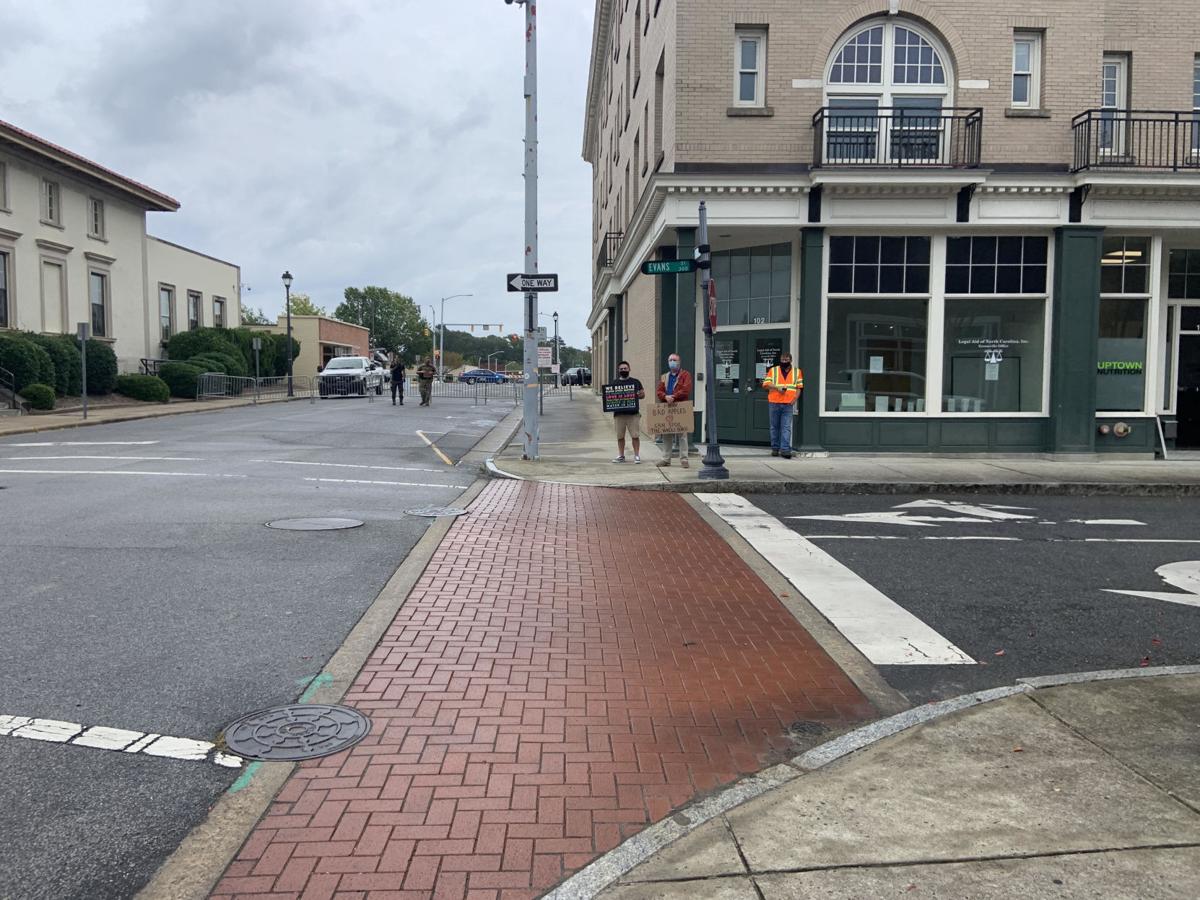 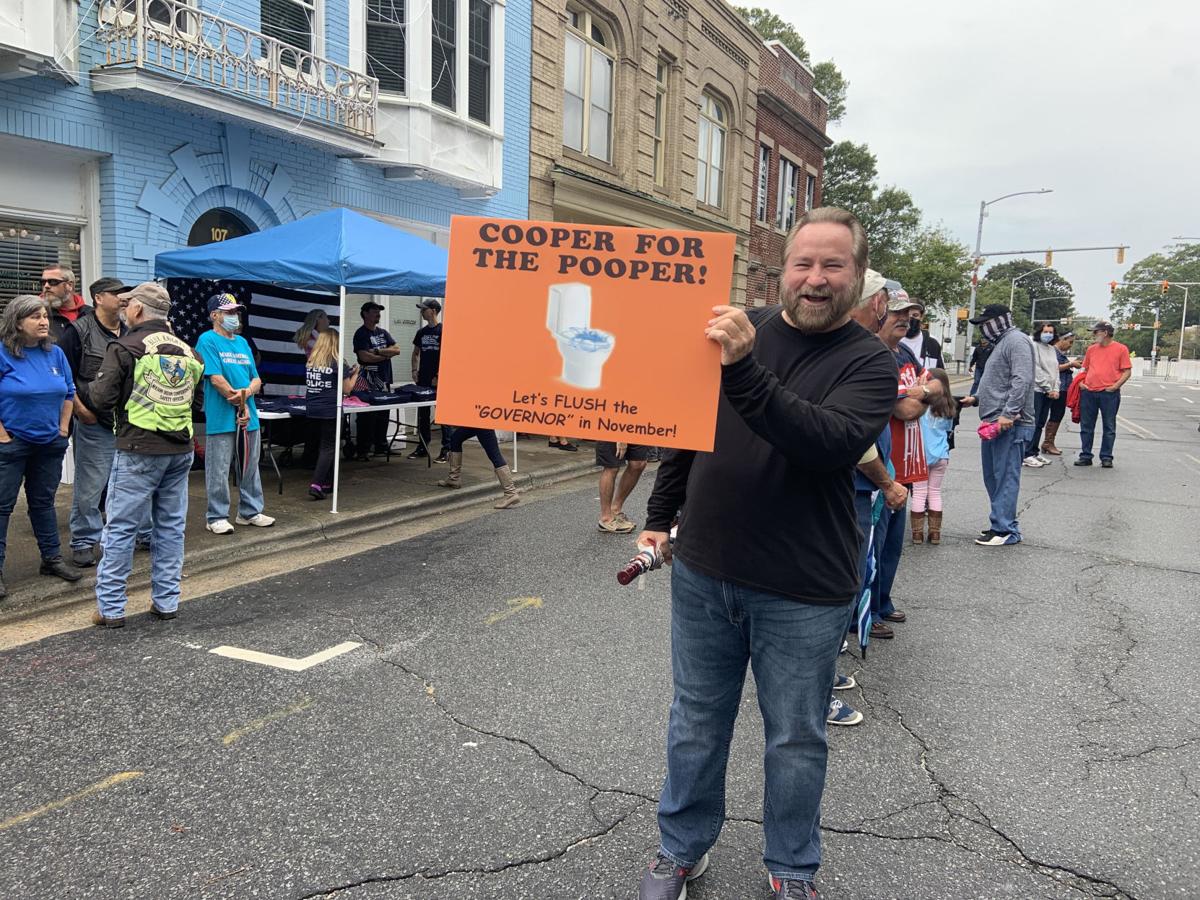 Led by a man playing bagpipes, the law enforcement supporters marched through downtown chanting “Back the Blue” and “USA.”

Attendees stand in front of protesters to block their signs.

A group of protesters hold signs at Saturday's event.

Chanting “Back the Blue,” about 200 people marched through downtown Greenville on Saturday following a rally to support law enforcement.

“The only reason I did this is because I got sick and tired of people abusing my law enforcement,” organizer Jerry Fisher said. The voices of supporters are being downed out by calls to defund the police, he said.

Local and regional elected leaders and political candidates spoke to a mostly unmasked crowd that held signs proclaiming “Back the Blue” and “Defend the Police.”

Carteret County Sheriff Asa Buck said he has never seen a slogan such as “Defund the Police” turned into a public policy during his 22-year law enforcement career.

“It’s disheartening to you, the good people of our communities, otherwise you wouldn’t be here,” Buck said.

There will be no justice for victims if police are defunded, Buck said.

Each year, 1,000 people in the United States die from a deadly force encounter with law enforcement, Buck said, and the national media doesn’t provide perspective.

Addul El Alli, co-founder of The Urban Conservative organizations, said black communities suffer the most when the police are defunded because law enforcement are unable to get to them.

El Alli spoke about his childhood spent in foster care and juvenile detention facilities. However, he didn’t let those circumstances stop him and should not be accepted as an excuse to commit crime.

Fisher said while he is not aligned with a political party, he acknowledged many of the day’s speakers were Republicans.

“They’re here because I don’t have any local Democrats that haven’t signed to support defunding the police,” Fisher said. “All the local Democrats have signed up and been affiliated with groups that are openly hostile to law enforcement so I didn’t know who I was going to invite.”

Fisher said he was told Sheriff Paula Dance, a Democrat, wasn’t at the event because she had a previous engagement.

“I’ll just say some people are more upset about upsetting their constituency than others,” Fisher said.

Sandy Smith, the Republican challenger in the 1st Congressional District election, said citizens can support police by buying officers a meal when they are in restaurants or mowing their lawn if they’re a neighbor.

“I am going to tell you right now I am for law and order, supporting law enforcement and supporting our Second Amendment so we can protect our families every single day,” Smith said.

N.C. House Rep. Perrin Jones said he is able to spend time with his family because law enforcement provides protection. However, distrust and fear in those in uniform has to be addressed.

“We cannot blind ourselves to it, we must confront it by reminding people of the value of the rule of law and reconciling legitimate concerns so that training and other methods can improve,” Jones said.

U.S. Rep. Greg Murphy, who was a scheduled speaker, was unable to attend because of family issues, Fisher said.

Murphy came under criticism earlier this week when he tweeted that Democratic vice presidential candidate Kamala Harris was chosen “for her color and her race” only to delete the comment and later say he meant “color and gender.”

“While this was not a city-sponsored event, it was a permitted event that required road closures,” police spokeswoman Kristen Hunter said. “As such, Chief Holtzman was in attendance and oversaw traffic control and public safety logistics. He supports everyone’s First Amendment rights to peacefully assemble and to freedom of speech.”

Marchers waved “Trump 2020,” “Blue Lives Matter” and American flags while chanting “Back the Blue” and “USA.”

Jerry Mcroy, 66, of Greenville waved a sign stating “Cooper for the Pooper” and said Gov. Roy Cooper does not support the police. He is upset Cooper marched in June with individuals protesting the death of George Floyd.

“He tells us we have to wear masks, we can’t gather like this but he’ll go out and march with protesters who are to me on the wrong side of the issue,” Mcroy said.

Leslie Anderson, 50, of Semora, which is north of Durham, said her family has attended events supporting the police in Raleigh. She buys meals for officers if she sees them at a restaurant.

“I wanted to come out and back the blue, back the police officers and law enforcement officers across the country,” Anderson said.

Counter protesters held signs declaring “Make Racists Afraid Again” and “Injustice anywhere is a threat to justice everywhere” at the intersection of Evans Third Street. Attendees stood in front of the group to block them.

“We’re supportive of our police department, we’re not anti-police,” said Zachary Pate, 38, of Greenville. However, the Blue Lives Matter movement doesn’t acknowledge there are problematic police officers, he said.

David Nelson, 56, of Greenville said people should have input into policing. He wants a citizens police review board.

“Not to confront anybody, but I think we need to bear witness that painting any group as 100 percent good or 100 percent bad is wrong, that’s what they’re doing,” Nelson said.