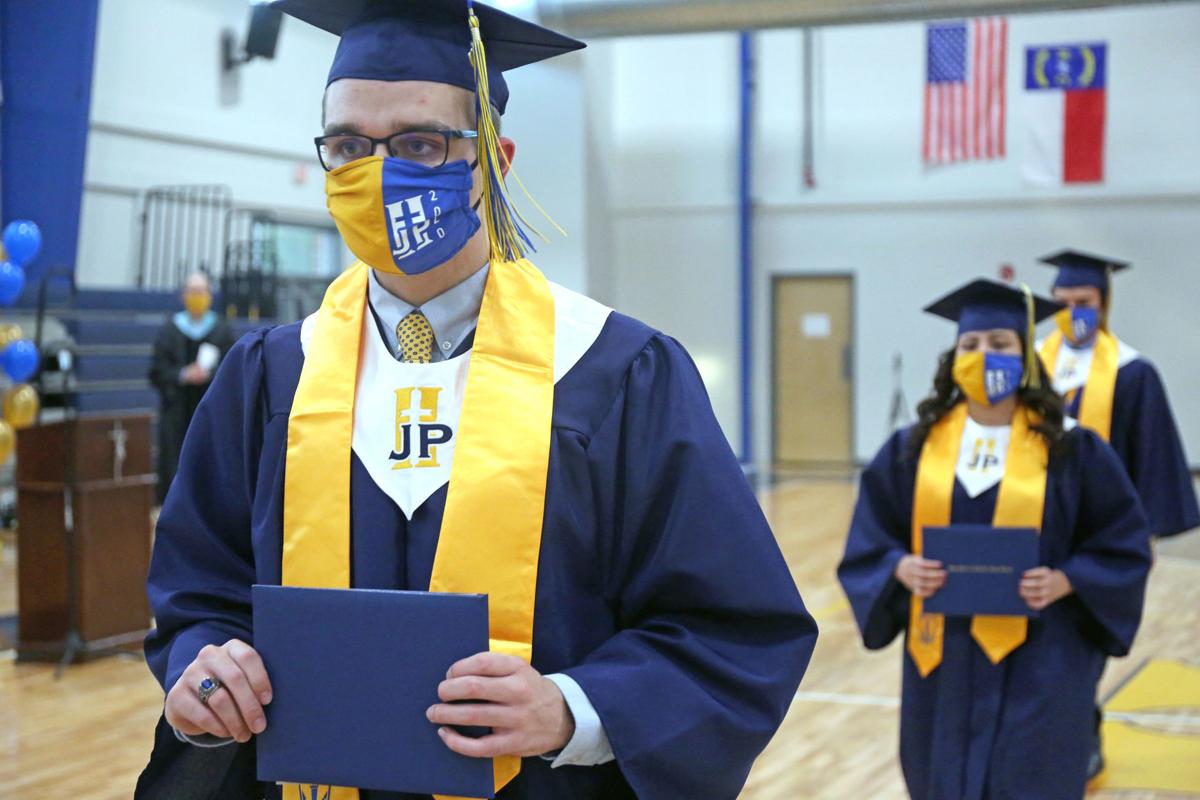 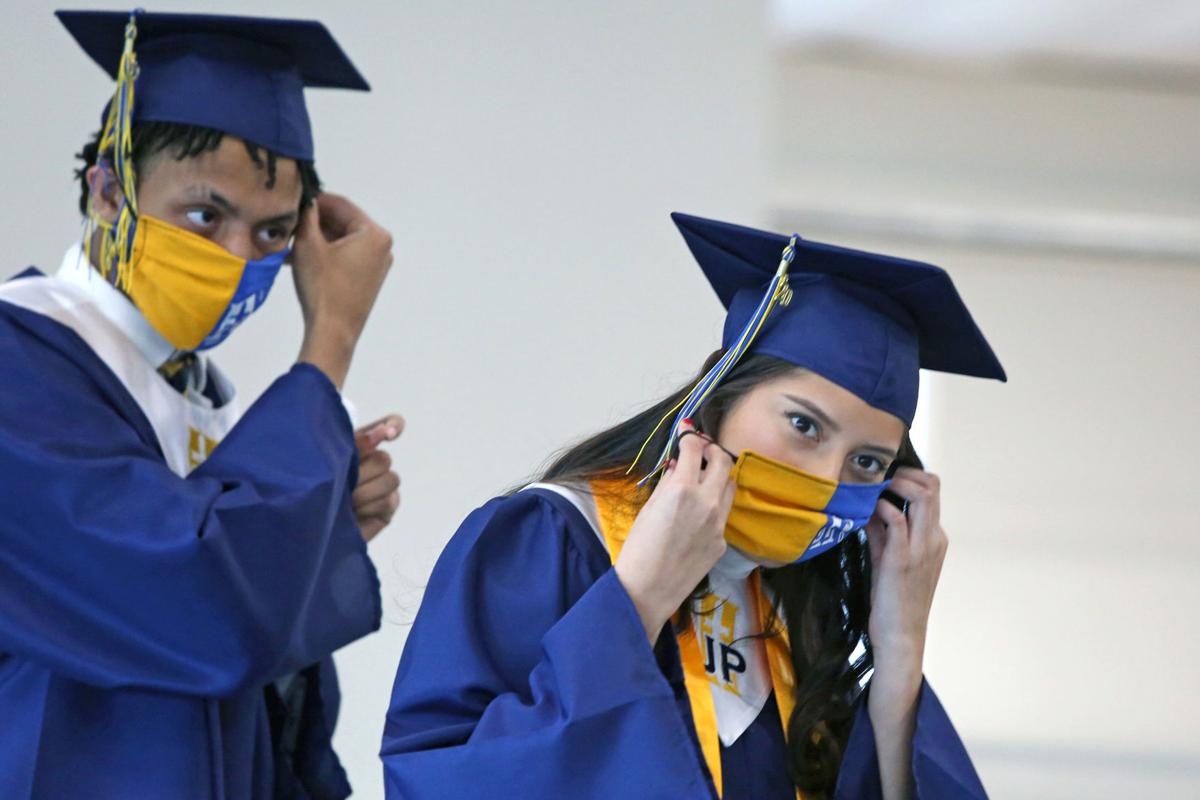 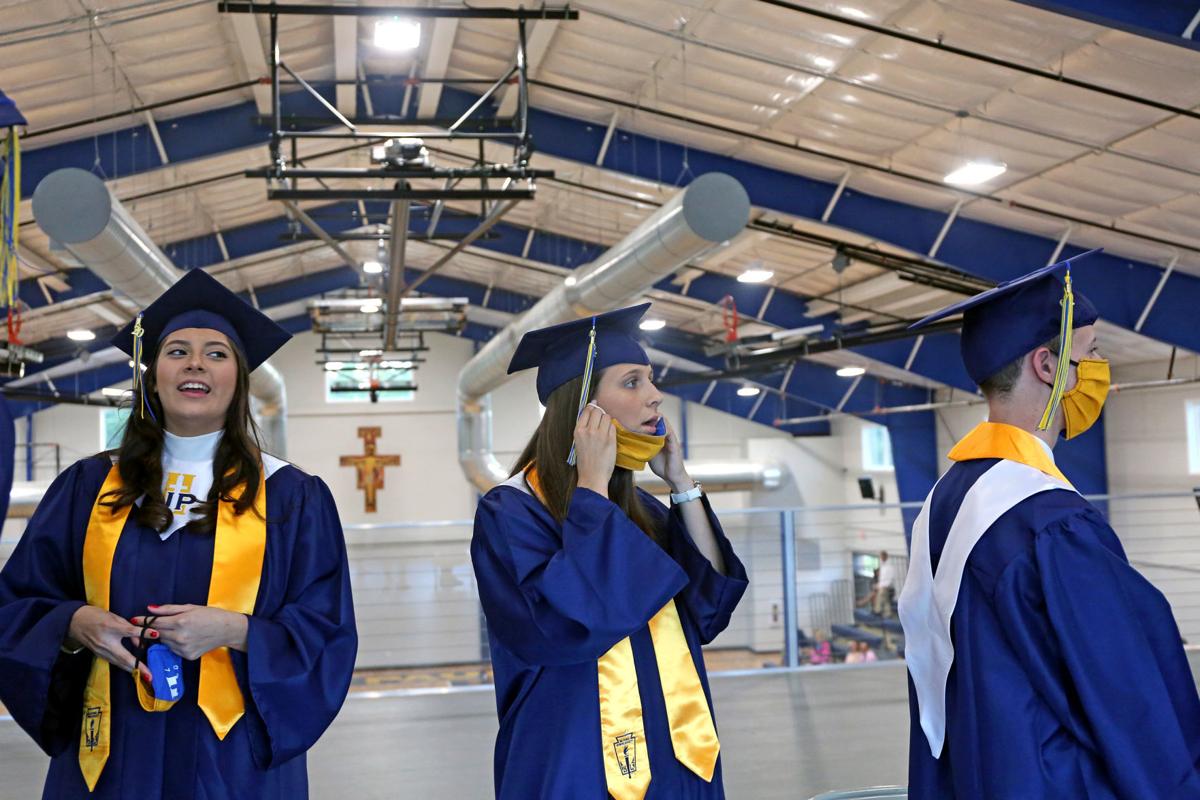 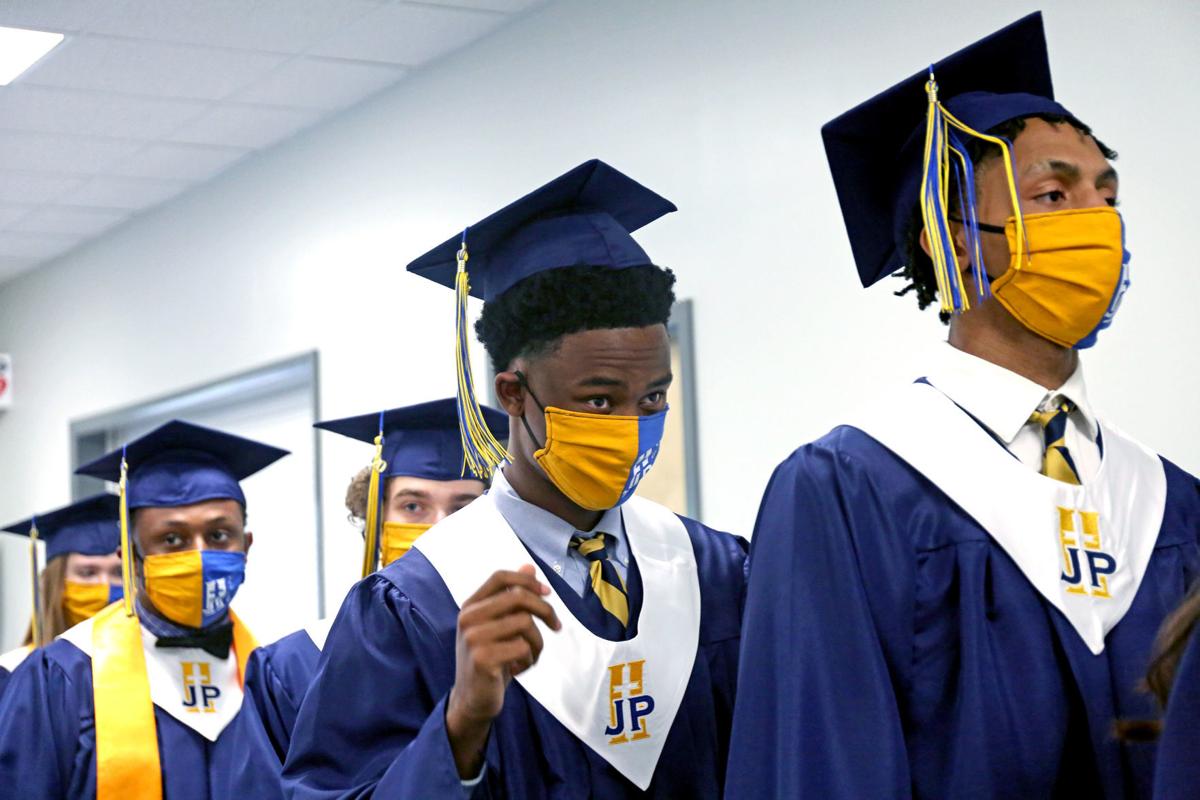 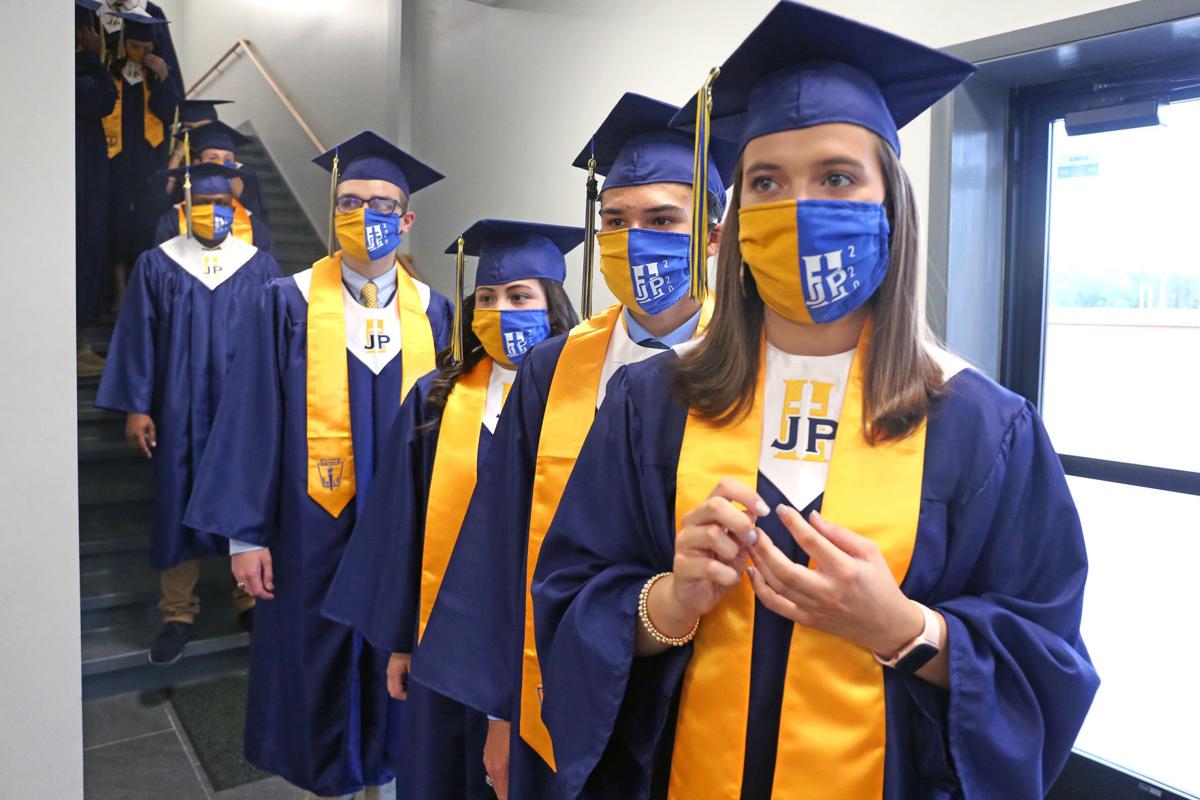 Students from John Paul II Catholic High School line up before they enter the gym for a graduation ceremony amid the COVID-19 pandemic with social distancing precautions. 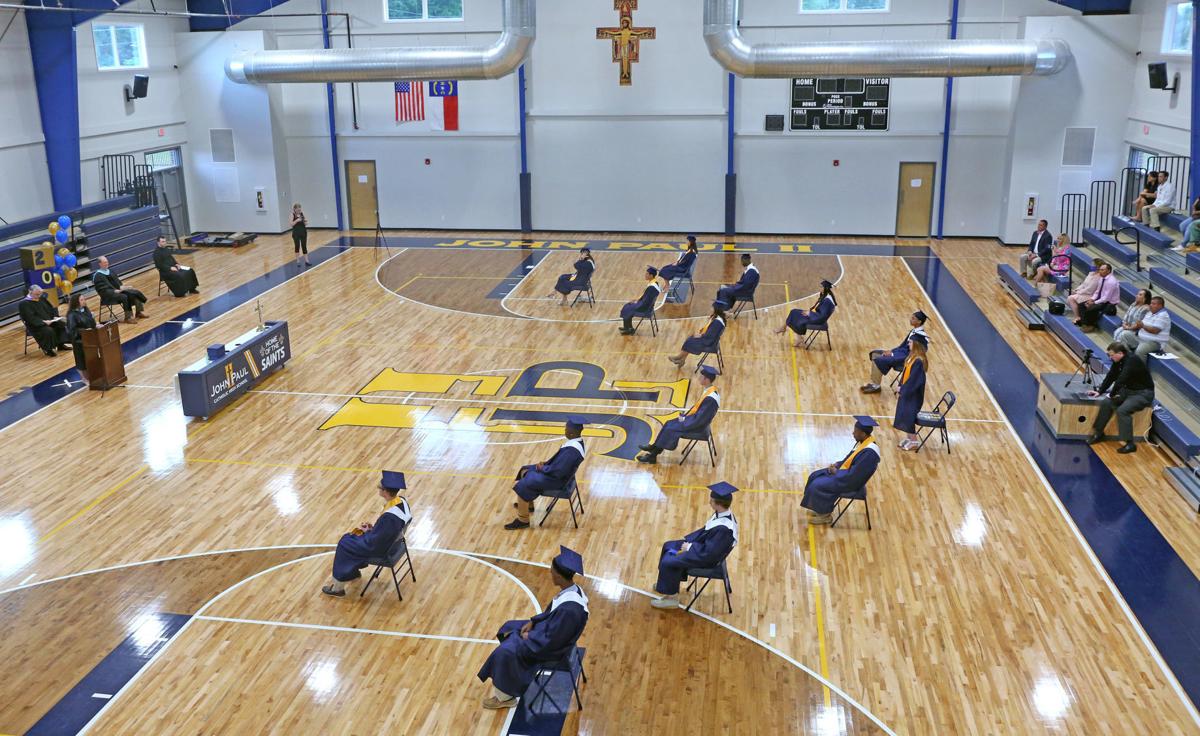 Students from John Paul II Catholic High School graduate amid the COVID-19 pandemic with social distancing precautions. The 14 graduates were spaced evenly apart during the ceremony. 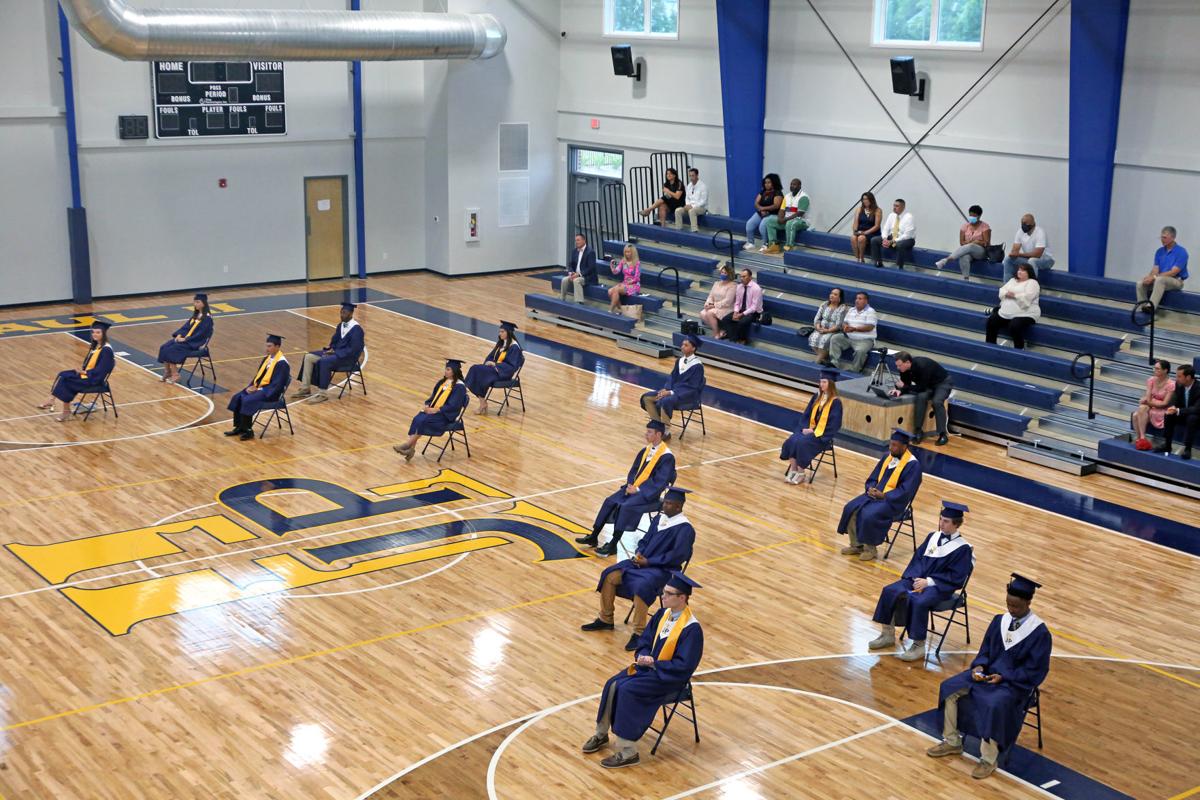 Students from John Paul II Catholic High School graduate amid the COVID-19 pandemic with social distancing precautions. The 14 graduates are spaced evenly apart during the ceremony.

Students from John Paul II Catholic High School line up before they enter the gym for a graduation ceremony amid the COVID-19 pandemic with social distancing precautions.

Students from John Paul II Catholic High School graduate amid the COVID-19 pandemic with social distancing precautions. The 14 graduates were spaced evenly apart during the ceremony.

Students from John Paul II Catholic High School graduate amid the COVID-19 pandemic with social distancing precautions. The 14 graduates are spaced evenly apart during the ceremony.

The first graduation in a year that has seen many ceremonies canceled took place at John Paul II Catholic High School on Saturday, even though it looked different with measures in place to prevent coronavirus.

Each of the 14 graduates was allowed to bring two guests, and all participants had to be temperature tested before entering the school's gymnasium on East 14th Street.

Masks were required and families and graduates were spaced 6 feet apart. Many family members had to watch the ceremony virtually, with some sitting in the parking lot just outside the gym. Teachers were not able to attend.

The ceremony was similar to what is expected at others scheduled this week, including events honoring about 1,700 graduates at Pitt County's public high schools, which began Monday.

"COVID-19 has forever changed society but should not change the class of 2020's dreams and goals in the pursuit of being productive citizens in our society," JPII Class President Frida Raya said as she addressed the assembled audience and viewers online.

Raya, who plans to attend East Carolina University, said it was difficult not seeing her classmates after COVID-19 forced an abrupt end to in-person classes in March.

She had already brought her prom dress and had taken pictures, she said, and she would have like to have brought her sisters to graduation along with her parents. She said she had family members who were watching online.

Salutatorian Cristian Bernal said teachers and administrators eased the transition to online classes, and he echoed Raya's disappointment about prom, which he said was going to be a masquerade-themed event at Yankee Hall Plantation.

Bernal is going to ECU plans to transfer to N.C. State with plans to become a veterinarian. He hopes to finish ECU in three years.

"I don't know, I just have bittersweet stuck in my mind," she said when asked to reflect on the event. "I'm thankful that we were still able to have it, but it's still sad that this is what it's come to and that we all had to wear masks. ...

"But I was so thankful I was able to experience it actually as a graduation and not virtually or having (to) come in and my school film a video for me, and I think that's just another way for me to say I'm thankful for this school," Barfield said.

Barfield plans to attend Meredith College in the fall to study exercise and sports science. She hopes to become a physical therapist.

Jessica Barfield, Karsen's mother, said parents had to step up and do things out of their comfort zone this school year. She said she was expecting no graduation.

"We had a lot of moments where the human connection was just impossible to have with the teachers, and that face-to-face interaction in that is where our family thrives, and where my child thrives, and we had to learn how to live without that and how to succeed without that human-to-human interaction. And so it caused a lot of tension, it caused a lot of stress, but somehow she soared through it all just like every senior of this class did," Barfield said.

Graduate Nathan Woolard said this school year was different. He said he missed his peers' laughter and being in the classroom with them. Graduation was the first time he had seen them since COVID-19 outbreak.

He plans to attend Pitt Community College then transfer to ECU.

"I'm glad we got to graduate and see each other for this last time and be together," Woolard said.

Woolard's mother, Regina Woolard, and his father were his guests. He said his brother watched him graduate online.

Regina Woolard said she was very worried that there may have not been a graduation. She said the graduation was very touching.

"We were just all delighted when we could all come together, even though we have an older son, and he wasn't able to be here, so it was kind of heartbreaking," Woolard said. "But, then again, it was kind of a relief too because we got to have a graduation."