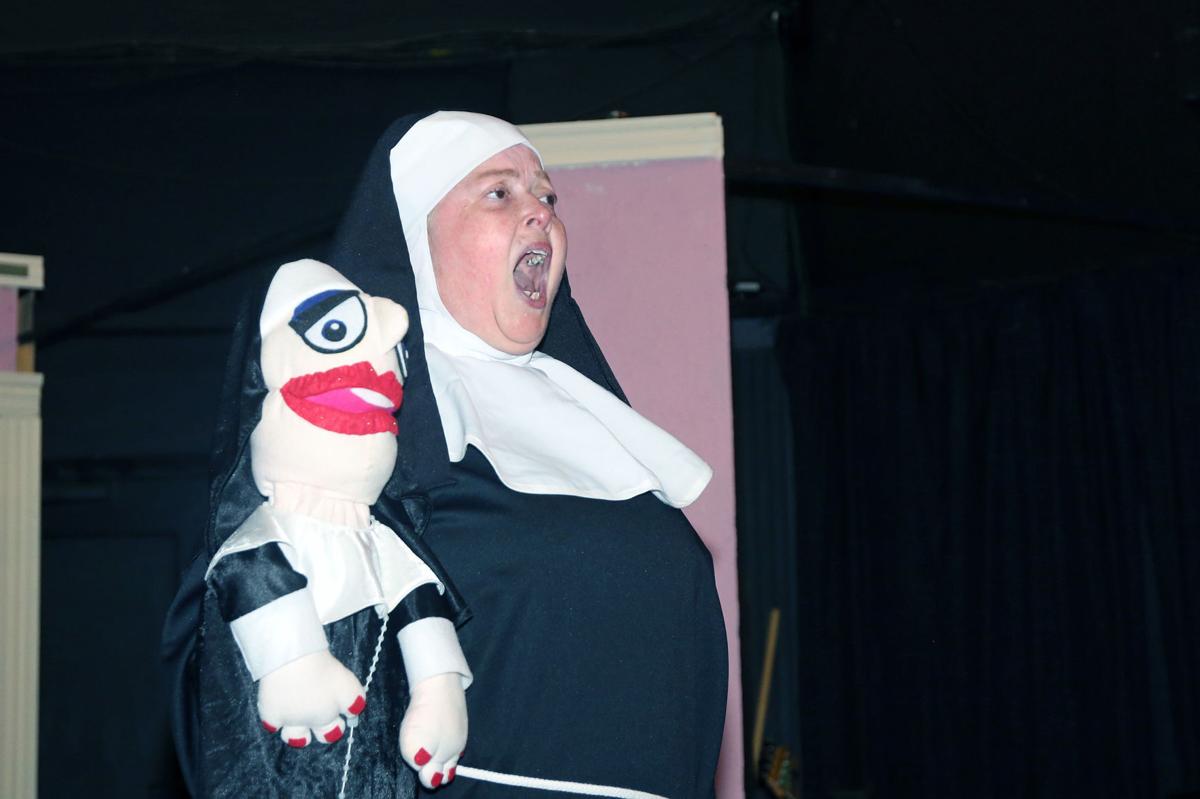 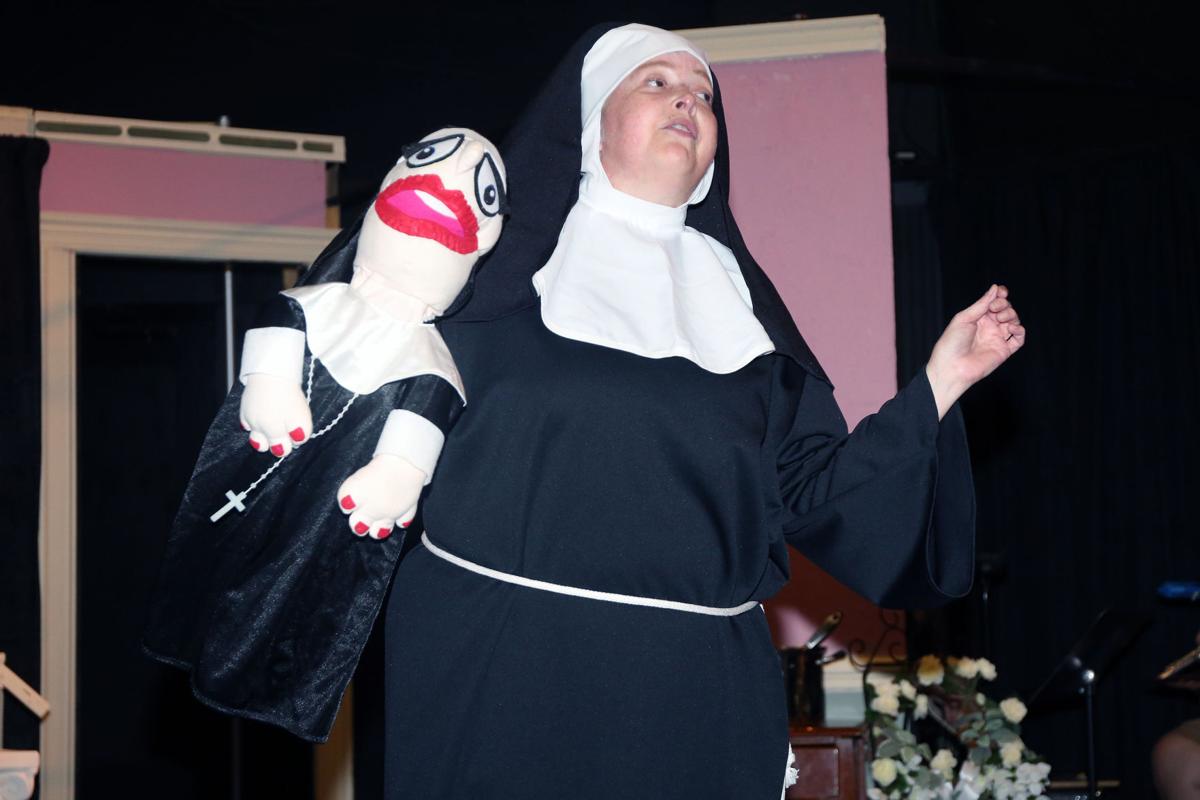 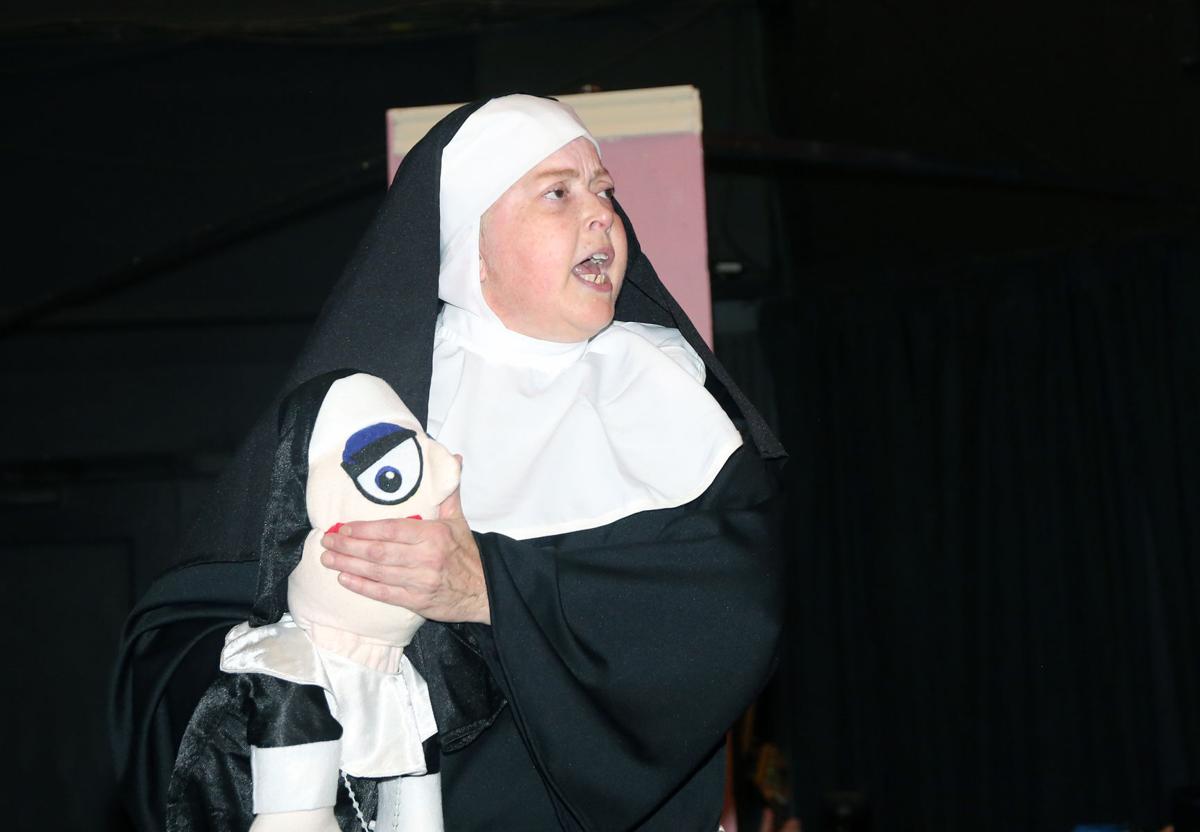 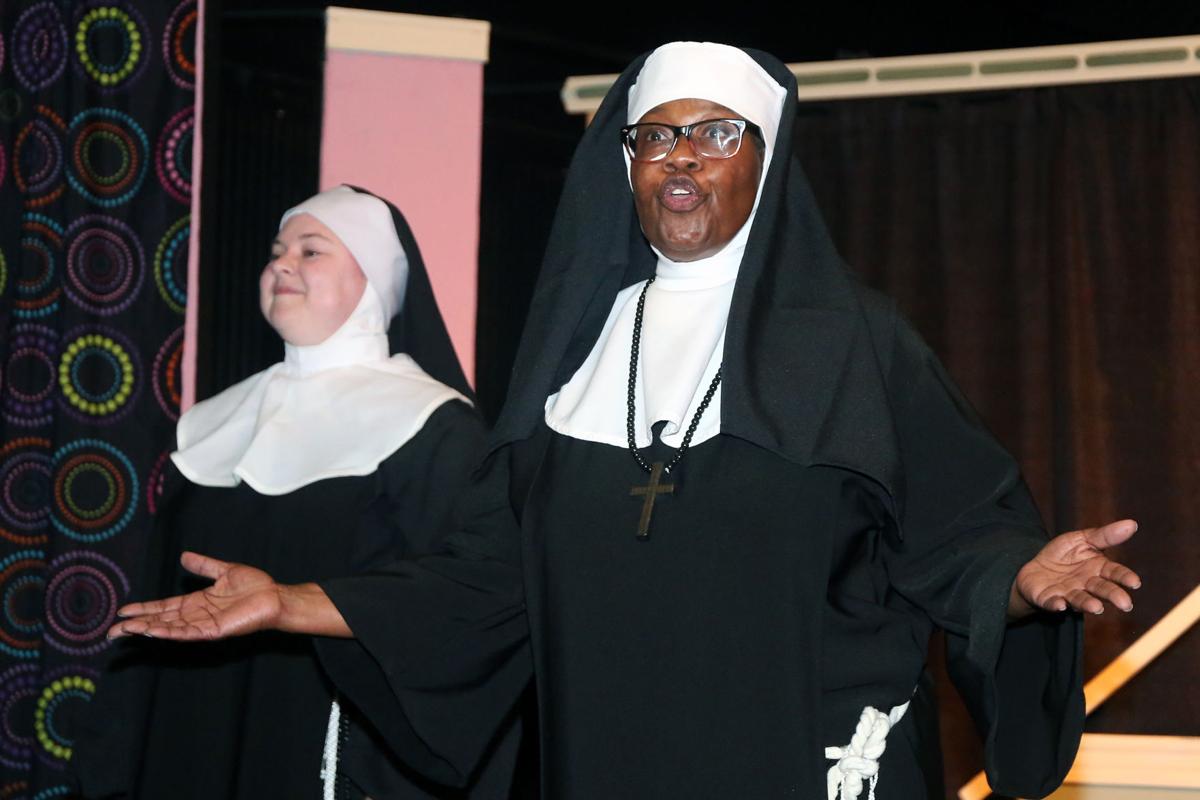 LaVerna Parker plays the Reverend Mother Regina, who is head of the Little Sisters of Hoboken in the play Nunsense. Laura Challender, who plays Sister Mary Hubert is behind her.

LaVerna Parker plays the Reverend Mother Regina, who is head of the Little Sisters of Hoboken in the play Nunsense. Laura Challender, who plays Sister Mary Hubert is behind her.

Almost a year and a half without a live production is a long time to wait, but Magnolia Arts Center is hoping to get audiences back in the habit with “Nunsense,” which opens tonight.

The musical comedy is the community theater’s first live performance since theaters worldwide closed in 2020 due to the coronavirus pandemic. It is the first of four shows Magnolia plans to stage before the end of the year.

Artistic Director Mitch Butts, who has directed “Nunsense” at least a half a dozen times for various community theater groups, said it is a perfect choice for a comeback.

“It always draws a crowd,” he said. “It’s just a funny show, and people don’t expect it to be as funny as it is. How often do you get a show that pokes fun at religion but not in a way that makes people upset?”

“Nunsense,” by Dan Goggin, is the zany story of the Little Sisters of Hoboken, who are staging a fundraiser to be able to afford to bury members of the convent killed in a food poisoning accident.

While the show enjoyed a 10-year run off-Broadway, where it opened in 1985, Butts said it wasn’t planned for the Magnolia stage until after COVID-19 when safety concerns prompted the theater to select a production with a smaller cast.

Magnolia board of directors president Collice Moore was not sure what kind of turnout to expect at auditions, although the arts organization had been fielding numerous inquiries from actors ready to return to the stage.

“I think people are glad we’re doing something,” he said. “We’ve had a lot of emails with people asking when we’re going to be back open, a lot of people asking when they can audition for a play. We haven’t had any trouble casting any of the shows.”

LaVerna Parker, who was featured in Magnolia’s Gospel musical “Crowns” in 2011, is returning to the stage a decade later as the Reverend Mother Regina. Chria Williams (“The Odd Couple” and “The Rocky Horror Show”) portrays Sister Mary Amnesia, the ditzy sister who lost her memory when a crucifix fell on her head.

Emma Laughinghouse, (“The 25th Annual Putnam County Spelling Bee,” and “Talking With ...”) plays Sister Mary Leo. A South Central High School graduate who plans to pursue a degree in music theater at East Carolina University beginning this fall, she was eager to be back on stage after months of waiting in the wings.

“Theater is my outlet,” said Laughinghouse, who attended Magnolia’s virtual theater classes during her down time. “Being on stage is where I thrive, so no matter what show they were doing I knew that I just had to be back on the stage.”

For Greenville native Laura Challender, the break from stage has been longer than 15 or 16 months.

“It’s been 15 years, actually,” said Challender, a J.H. Rose High School graduate who played the title character in “Calamity Jane.” She pursued dance in New York before moving back to her hometown last summer.

“A friend of mine who was in ‘Hairspray’ said, ‘You should try this; they’re doing auditions,’” Challender recalled. “It’s just so nice to work with people again, to do something creative and collaborative.”

A former member of the Green Grass Cloggers, she will get to use some of her skills during a tap dance in the role of Sister Mary Hubert for her first Magnolia production.

Cast member Michelle Joyner is not only new to Magnolia but is making her theatrical debut in “Nunsense.” What prompted this former math teacher and pastor to audition for a musical comedy?

“COVID,” she said. “It’s like you’ve been shut up and you’re kind of out of the norm of routine and so you want to do something new. I was like, ‘Let me see if I can do this.’ I really did not think he (Butts) was going to call me.”

It’s been 20 years since Joyner has sung choral music, but she has been happy to harmonize with her cast mates as Sister Robert Ann, a character she describes as an “attention-seeking troublemaker.”

“We’re not your ordinary nuns,” she said, laughing. “I get to be a little mischievous.”

“Nunsense,” which will have limited seating to help prevent the spread of COVID-19, continues through Aug. 1 with 10 performances. Magnolia’s 10-Minute Play Festival is scheduled for Aug. 20-21, followed by “Arsenic and Old Lace” from Aug. 26- Sept. 5 and “Between Riverside and Crazy” from Sept. 30-Oct. 9.

Moore acknowledges that the schedule is a more hectic one than the all-volunteer theater group usually maintains. Magnolia had seven productions in 2019 and was on pace for 10 in 2020 before the pandemic.

“I think people are going to be anxious to get back out,” he said. “I think that people are eager to get out and see things and do things and experience live performances.”