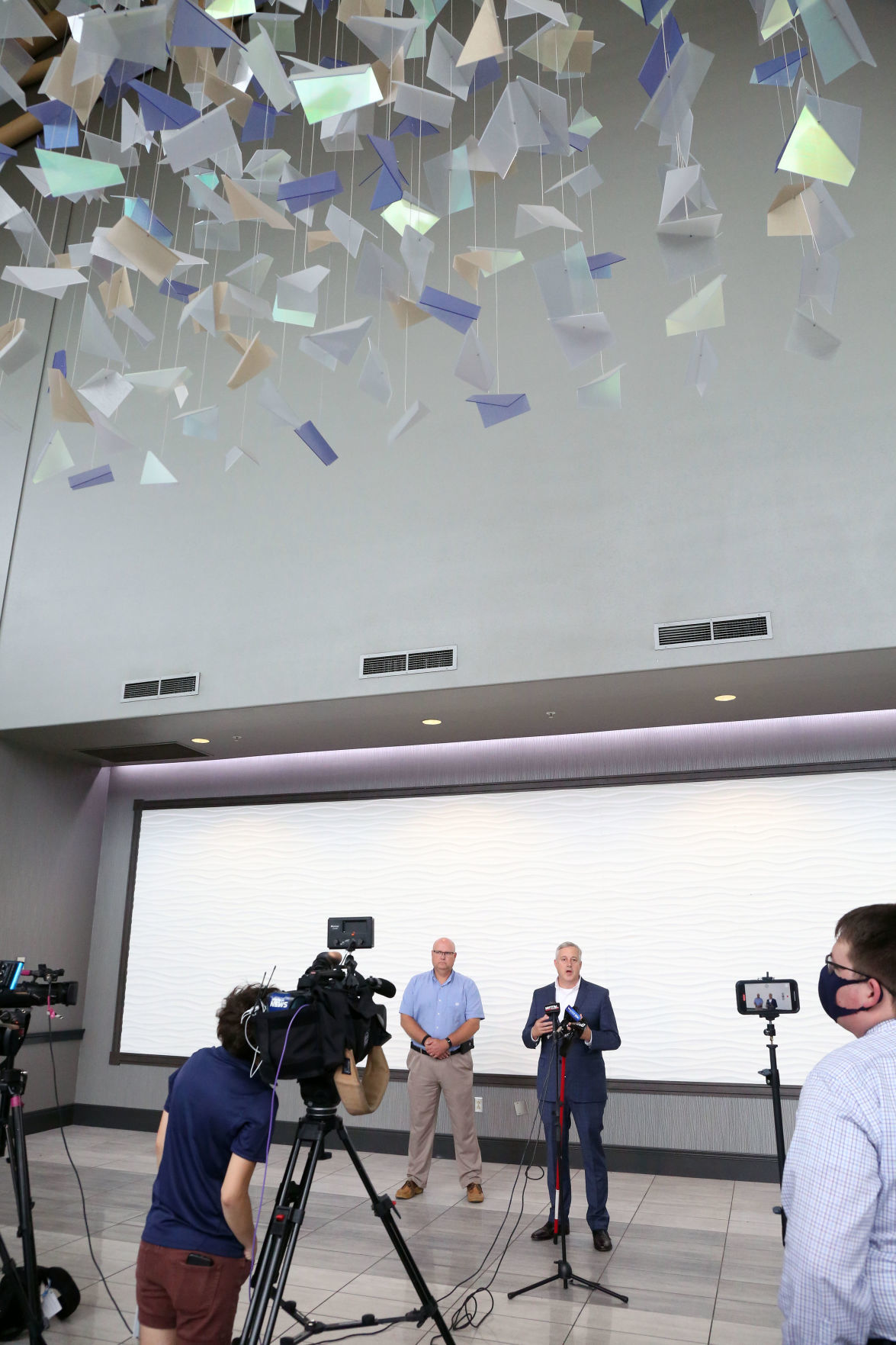 NCGOP Chairman Michael Whatley, right, and Pitt County Republican Chairman Gary Weaver talk with reporters at The Greenville Convention Center on the eve of what would have been the party’s State Convention, which had to be canceled following a letter from Gov. Roy Cooper, who deemed the event “high-risk” 10 days ago, because of the rising cases of COVID-19 across the state. 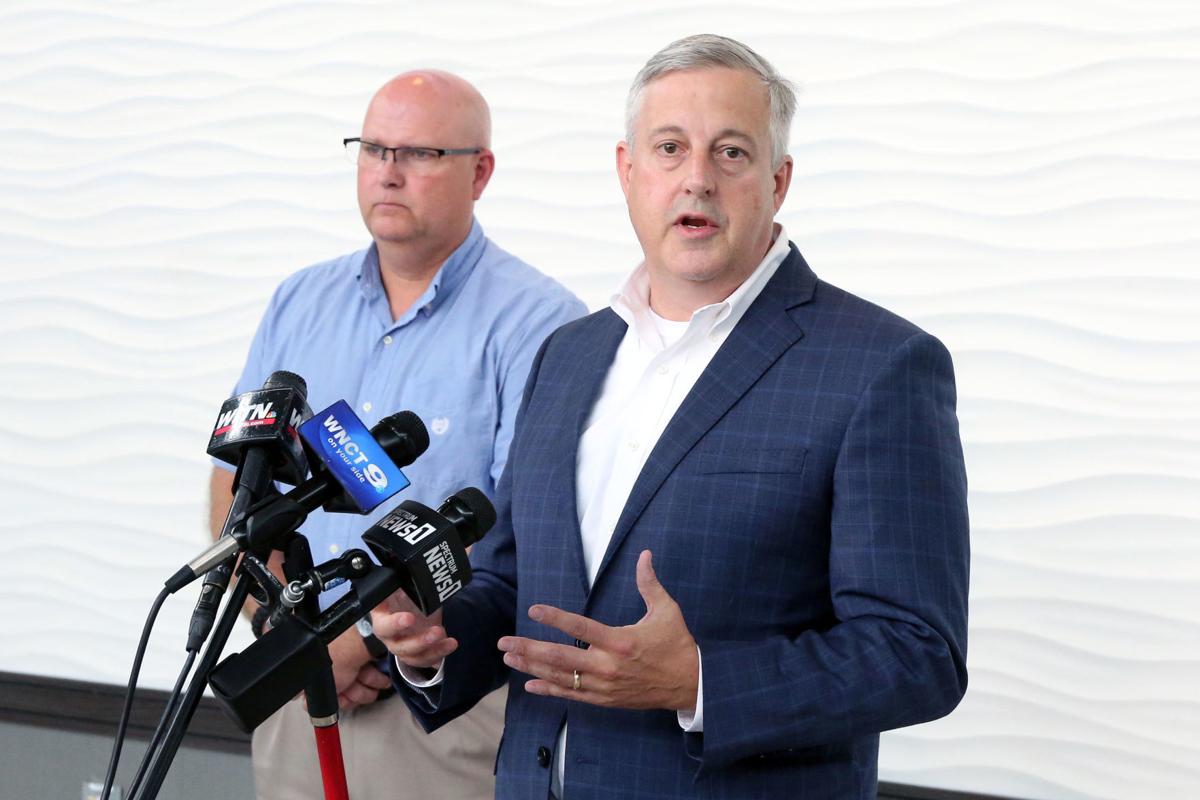 NCGOP Chairman Michael Whatley, right, and Pitt County Republican Chairman Gary Weaver talk with reporters at the Greenville Convention Center on the eve of what would have been the party’s State Convention, which had to be canceled following a letter from Gov. Roy Cooper.

NCGOP Chairman Michael Whatley, right, and Pitt County Republican Chairman Gary Weaver talk with reporters at The Greenville Convention Center on the eve of what would have been the party’s State Convention, which had to be canceled following a letter from Gov. Roy Cooper, who deemed the event “high-risk” 10 days ago, because of the rising cases of COVID-19 across the state.

NCGOP Chairman Michael Whatley, right, and Pitt County Republican Chairman Gary Weaver talk with reporters at the Greenville Convention Center on the eve of what would have been the party’s State Convention, which had to be canceled following a letter from Gov. Roy Cooper.

State and local Republicans accused Gov. Roy Cooper on Thursday of thwarting a state convention to be held in Greenville, while Cooper said the state’s advice on the matter was based on health concerns.

N.C. GOP Chairman Michael Whatley held a news conference at the Greenville Convention Center on the eve of a convention that will now take place online today.

“We are very disappointed that 10 days ago, the governor’s staff sent us a letter basically saying we could not move forward with the convention, listing out a number of safety and liability issues,” Whatley said.

“We had proposed full compliance with all the CDC and state guidelines and regulations, as well as his executive orders.”

Even curtailed, the convention would have put needed dollars into Greenville’s economy, Whatley and local Republicans said. Pitt County GOP Chairman Gary Weaver was with Whatley; Mayor P.J. Connelly and state Rep. Perrin Jones were scheduled to attend but did not. They issued statements later.

Cooper was asked during a Thursday briefing to respond to Whatley. He said the state health officials gave the GOP the same advice they would give any group planning a large gathering.

“When you look at the numbers that are elevating across the country, and when you see how rapidly the virus can spread when you have large crowds together indoors, obviously the state Department of Health and Human Services would tell them they probably shouldn’t do that — and I commend them for taking that advice and cancelling the convention.”

The briefing covered a range of topics including that Cooper will issue guidance next week for reopening the state’s school systems. “Pandemic response cannot be partisan,” he said.

The news came on a day when the state passed 1,000 hospitalizations due to the virus. Thursday’s total was a record high of 1,034, up from 994 on Wednesday. The number of new cases confirmed by testing on Thursday was 2,039, the second-highest one-day total.

Pitt County had an increase of 18 cases, up from 14 Wednesday, bringing the total to 876. Vidant Health reported 61 people were hospitalized with the virus in its facilities in eastern North Carolina on Thursday.

The GOP’s Whatley said plans had been made to social distance, require masks and only seat 25 percent of the convention’s capacity. Instead, 1,400 delegates will join the NCGOP online from their homes and county party offices today. The virtual convention will start at 12:30 p.m., with the last speaker at 7 p.m.

“We are going to have speakers, take votes, and have everything we [would have had] except we are just not going to be able have the camaraderie and people getting together,” he added.

“We are very disappointed, because I think the enthusiasm for President Trump, Dan Forest and Tom Tillis and Republican candidates from all across the state is very high. Bringing everyone here together was going to be a really good show,” he added.

Convention center CEO Rhesa Tucker said on June 30 that she “pulled the plug” on the event because measures in place to control the spread of the virus made it impossible for the facility to host. The decision came after weeks of discussion with state, local and party officials, she said.

Whatley said the party’s accommodations would have been safe. “We fully blame it on the governor and his team,” he said.

Perrin Jones, who is a physician, said the party followed all public health recommendations, including a virtual option that many attendees chose, as well as appropriate physical spacing, the wearing of face-coverings, and an adequate number of hand sanitizing stations.

“At some point, North Carolina must convert from a sprinter’s pace to a marathon pace in dealing with COVID-19,” Jones said. “In my mind, this means we must balance all public health concerns, including those associated with social isolation, along with the education, economic and recreational opportunities our state has lost as a result of this pandemic.”

Connelly said the event would have added nearly $1 million to the local economy. “I want to also thank all of the staff of the Convention Center and other groups that worked diligently to make the event a reality up until a final decision had to be made. It is my hope that we can work with all parties to host another event in the near future that will help us showcase all of the wonderful things happening here in the east.”

“Led by Gov. Cooper, Greenville residents and businesses have made serious sacrifices to protect our community — it’s reckless of appointed Rep. Perrin Jones and Republican Mayor P.J. Connelly to complain for the NCGOP to get a special exception to put lives at risk.”

Cooper on Thursday said a decision on how North Carolina public schools will reopen during the pandemic will come next week.

He previously delayed the disclosure set for July 1, saying he wanted more time to receive feedback from educators and students, review the latest science on school reopenings, and get more “buy-in across the board.”

Cooper was reticent on Wednesday to reveal how he is leaning. Schools have been asked to plan for three scenarios in preparation for classes to begin Aug. 17.

The scenarios range from in-person classrooms with minimal social distancing to all students working from home. K-12 schools teaching over 1.5 million students have been given minimum standards to meet under each of the three. Retaining regular remote learning for students is sure to bring extended hardships to working parents.

“We know that they need to get back in school. They need to do it in a safe way and that can be a combination of in-person learning and remote learning,” Cooper said at the briefing. “This is a tough call. How to open up schools is something that every single state, every single governor is struggling with.” Cooper said the plan would comply with the law, which includes a new one that appears to prevent remote learning during the first week of school.

Cooper said he also will announce next week whether businesses by his executive order — bars, gyms, skating rinks and entertainment venues among them — that’s set to expire July 17 can reopen. He and his administration have said patrons at these establishments in higher-risk activities for spreading the virus.