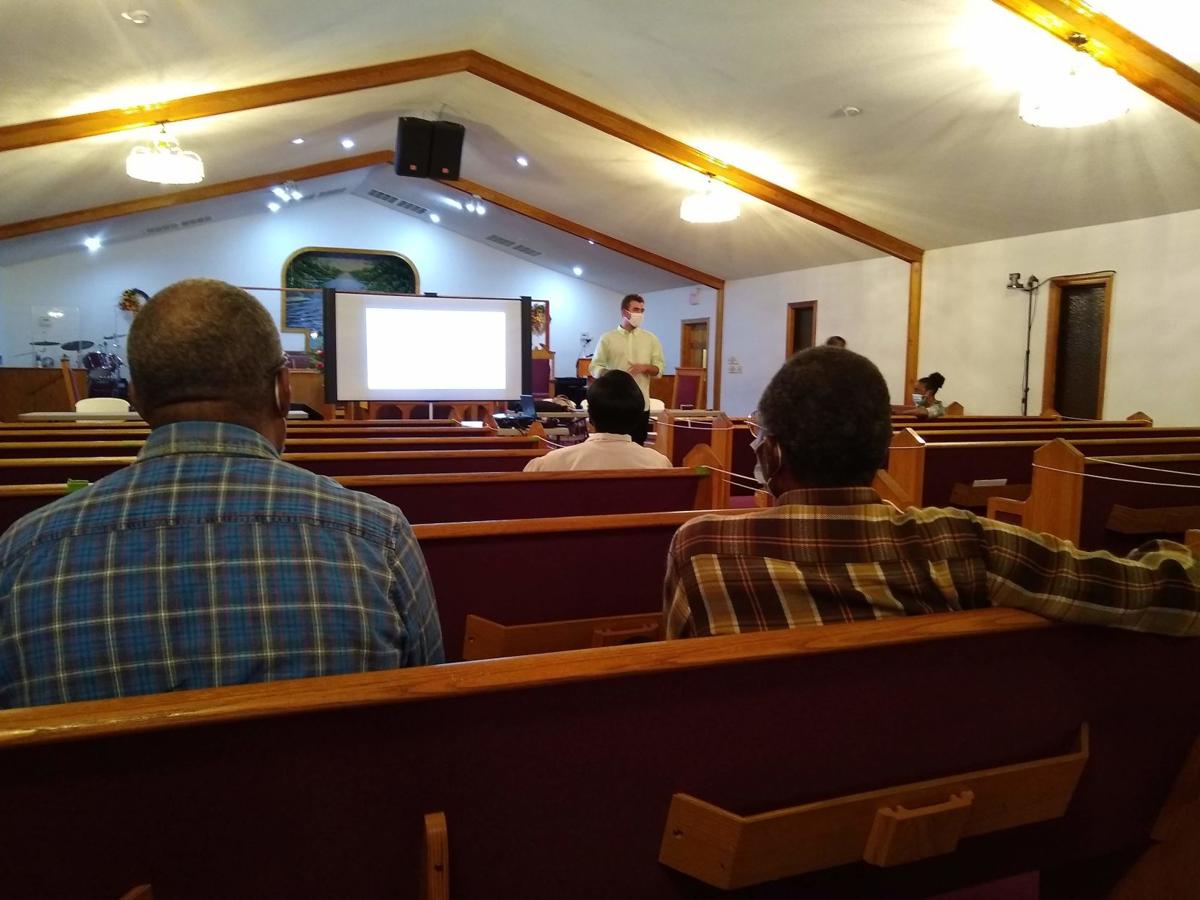 Members of the Belvoir community listen as Alex Urban, director of advocacy and civic engagement with Association of Mexicans in North Carolina, presents details about Compute North’s plans to build a facility that supports cryptocurrency mining on Thursday. 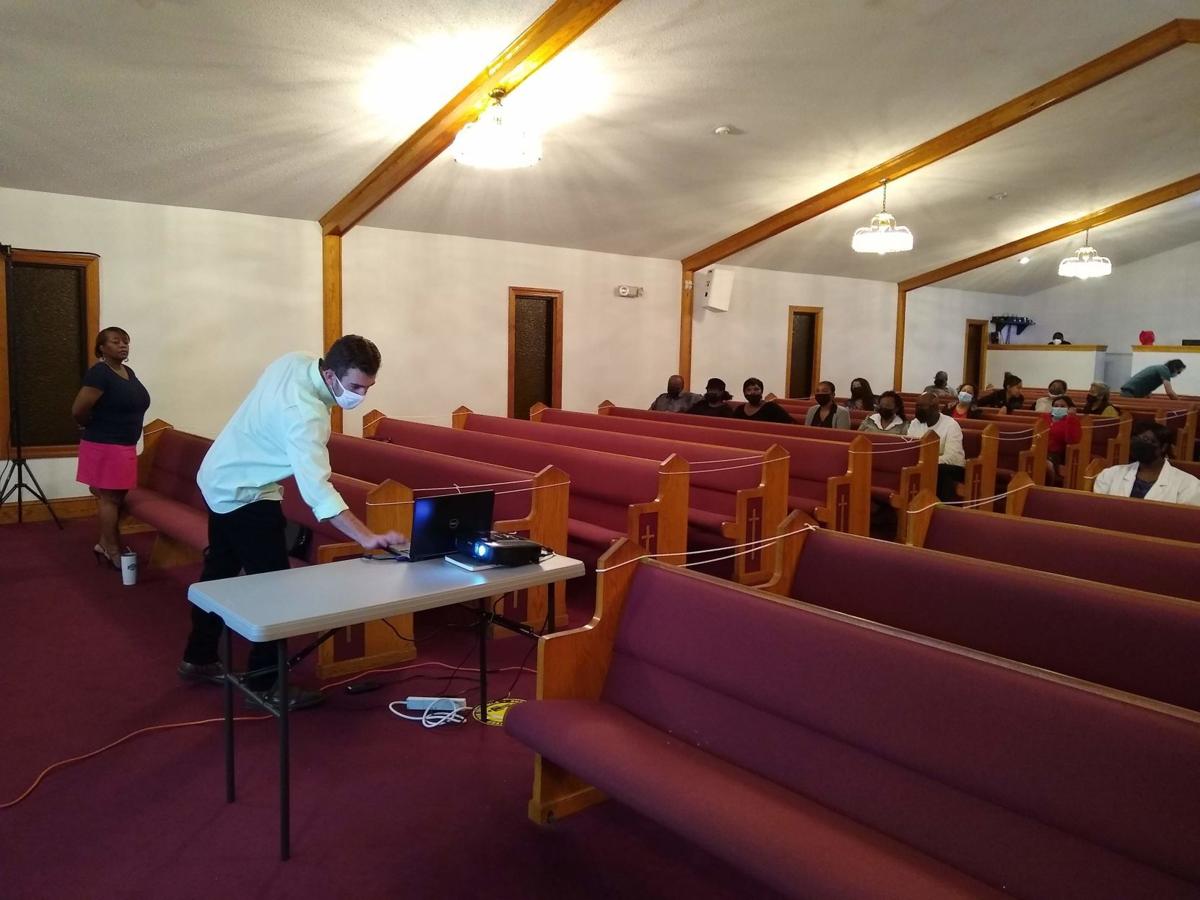 Members of the Belvoir community listen as Alex Urban, director of advocacy and civic engagement with Association of Mexicans in North Carolina, presents details about Compute North’s plans to build a facility that supports cryptocurrency mining on Thursday.

BELVOIR — Opposition is building against efforts to locate a facility that supports cryptocurrency mining near Belvoir Elementary School.

About 30 people gathered at Holly Hill Original Free Will Baptist Church Thursday to learn about the proposal. Presenters discussed starting a protest petition to be submitted to the Pitt County Board of Commissioners on Nov. 1, when it reconvenes a public hearing on Compute North’s request to locate 89 modules housing computer equipment used in the mining process.

“We are not trying to influence the community. We are not sharing our options with them. We are sharing the information we learned and giving them an opportunity to be informed about what is going on,” said Tonya Foreman, one of the event’s organizers. “We’re empowering them to be part of what is going on in their community.”

The meeting comes days after opponents urged the commissioners to deny the special-use permit Compute North needs to begin operations, saying the noise generated by more than 1,200 fans needed to cool the computing modules will harm the area’s quality of life.

Speakers said it’s an example of sacrificing the welfare of a predominately minority community and elementary school to benefit industry and local government.

The Association of Mexicans in North Carolina, a nonprofit that works with a large Hispanic population in the area, released a statement opposing the project on Wednesday.

“We ask to relocate this company where the health and lives of citizens are not affected,” said the group’s director Juvencio Rocha-Peralta, who also addressed commissioners Monday night.

“AMEXCAN will remain very vigilant, following up on this case, which could be taken to court, in case the Board of Commissioners grants permission to Compute North.”

Eighty-nine modules filled with computer processors would be placed on the property. A warehouse/office building also is planned.

People are concerned because each module requires 14 large air conditioning units to provide cooling. There will be more than 1,200 fans operating once the site is fully functioning.

Opponents also said there has been little transparency about the project.

Compute North held an open house five days before the commissioners’ meeting, but there were complaints the notices didn’t go out to enough people or to the elementary school.

Opponents said there also were failings in the county’s notification process.

“I live directly across from (the proposed site) and the only thing you can see is a grungy, small, barely readable-when-you-drive-past sign that says ‘special usage request permit request,’” said nearby resident Victoria Respass. “No one can see that. It looks like a crappy yard sale sign. It doesn’t look like anything important.”

It also was noted that no Spanish language sign was posted.

There also is concern about how the fans’ noise will affect nearby wildlife. A speaker at Monday’s Board of Commissioners meeting said there is an osprey nest on nearby property and believed the noise would drive it away. Bald eagles once nested in the area, a speaker noted. Repass repeated those concerns during Thursday’s meeting.

Businessman Harry Teel, who was among the first African Americans to integrate Pitt County Schools, talked about his 18-month fight with the county to change the zoning on property he owned.

“The way I got my point across is me and my friends and my family got us a petition. I bet I had close to 1,000 signatures. We went house to house to get signatures,” Teel said. “All we’ve got to do is get a petition and email it to the commissioners.”

Teel urged those attending the meeting to fill the commissioners’ auditorium.

“The question we need to ask all the county commissioners is, ‘Would you want it in your neighborhood?’” Teel said.

Commissioners on Monday directed that only acoustics experts will be able to speak at the Nov. 1 hearing. Pitt County Manager Scott Elliott said Friday the board will decide if it will accept any additional petitions.

“Because of the noise, the fans, when we could go outside we would talk so loud because we had been around the noise so long,” Burney said.

“With the fans you’re talking about, it’s devastating for anybody that’s going to be around,” she said.

Compute North vice president for site development Jeff Jackson said while the fans produce 90 decibels of sound if standing next to the containers, the company will use muffling equipment and sound barriers to reduce the noise in the surrounding community.

His company described the muffled noise from the site like a “quiet library.”

A video on Compute North’s website shows what a Compute North site looks like and the work employees do inside the containers, but it includes no sound.

An opponent at Monday’s meeting played a recording of a data center located in Washington County, Tenn., over the objection of a Compute North attorney. Jackson said the Tennessee site wasn’t properly permitted and used a different setup.

Several commissioners criticized the company for failing to address the likelihood of noise in early discussions with the county. Commissioner Alex Allbright told Jackson his company only began talking up its sound mitigation after an amendment to allow the permit request prompted opponents to complain.

One commissioner, Melvin McLawhorn, who represents the Belvoir area, stated firmly Monday that he would not support the request.