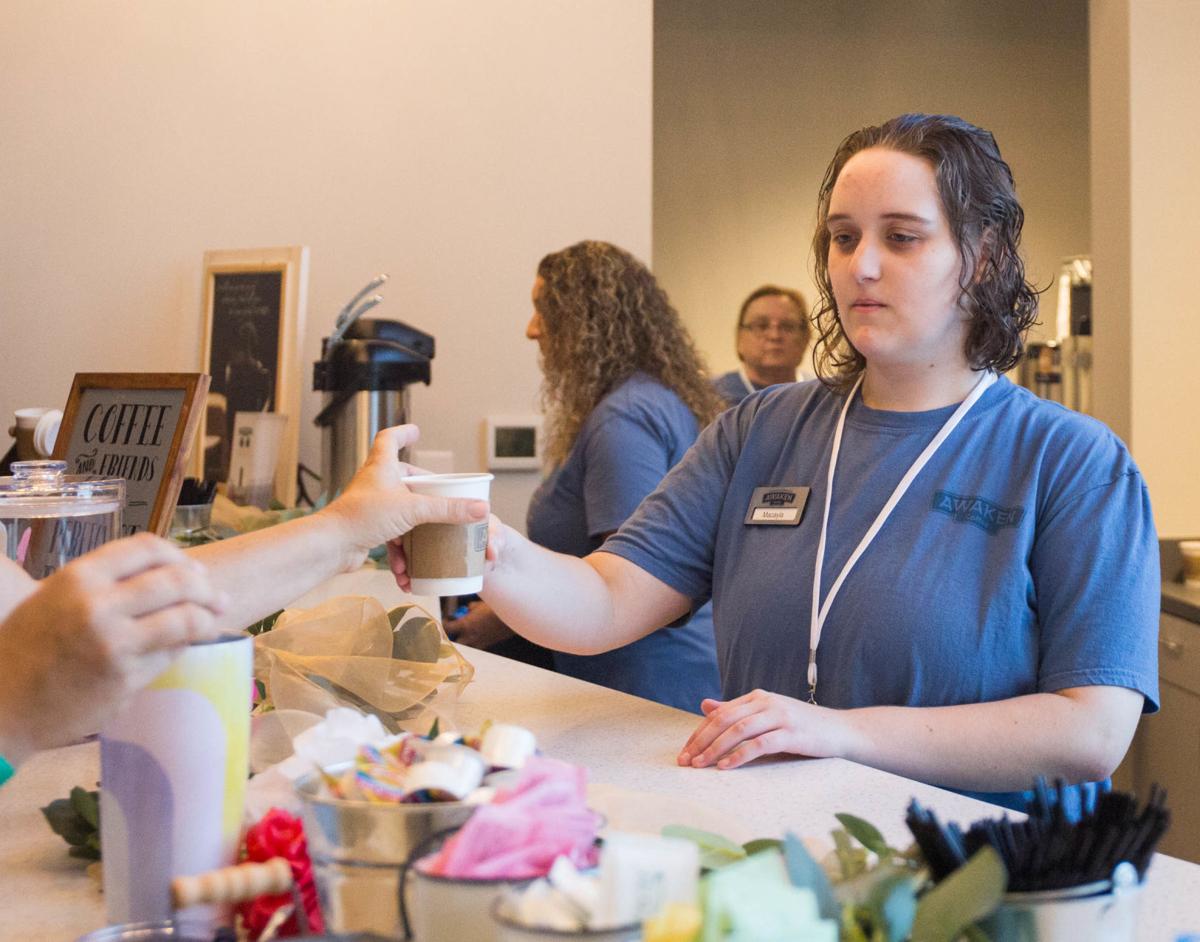 Macayla Cayton volunteers with Awaken Coffee. She is hoping to work at the shop, which will employ people with intellectual and developmental disabilities when it opens at Evans and 14th streets. “It will be more inclusive than a lot of other places,” Macayla said. 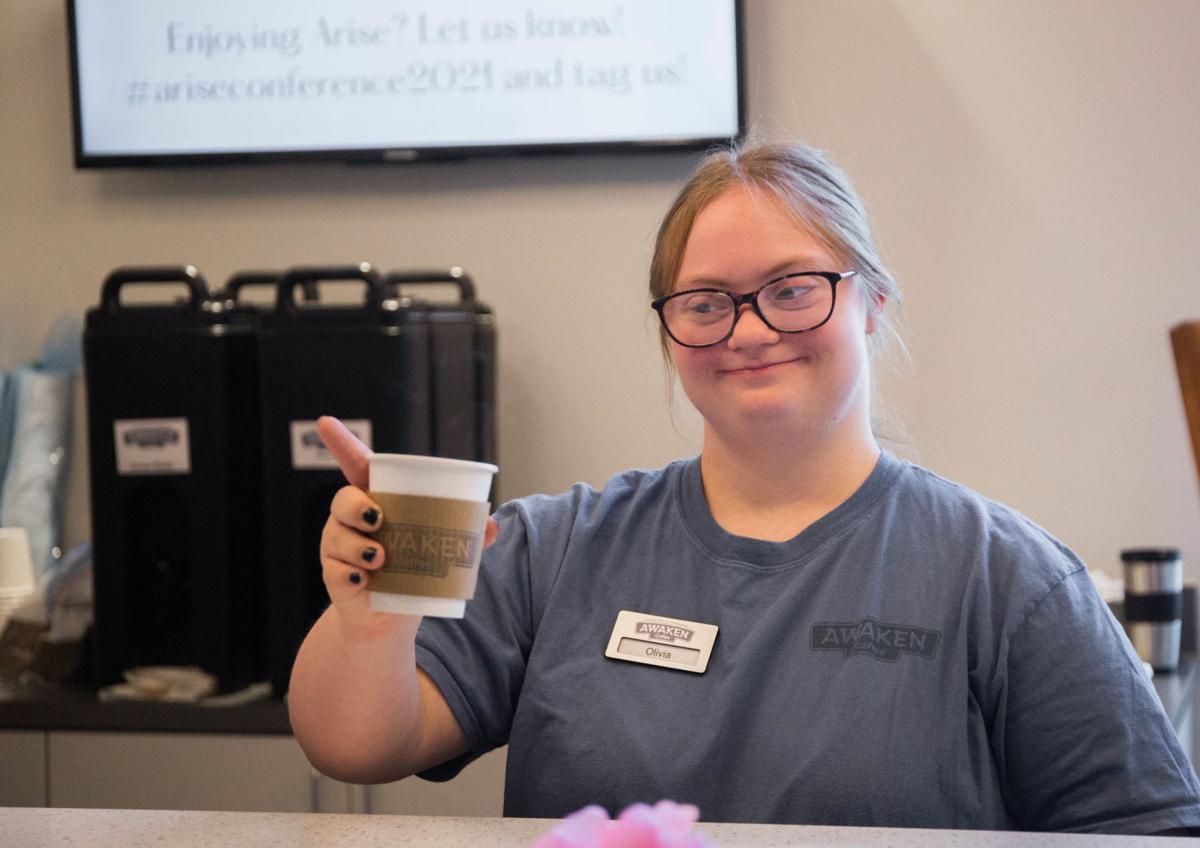 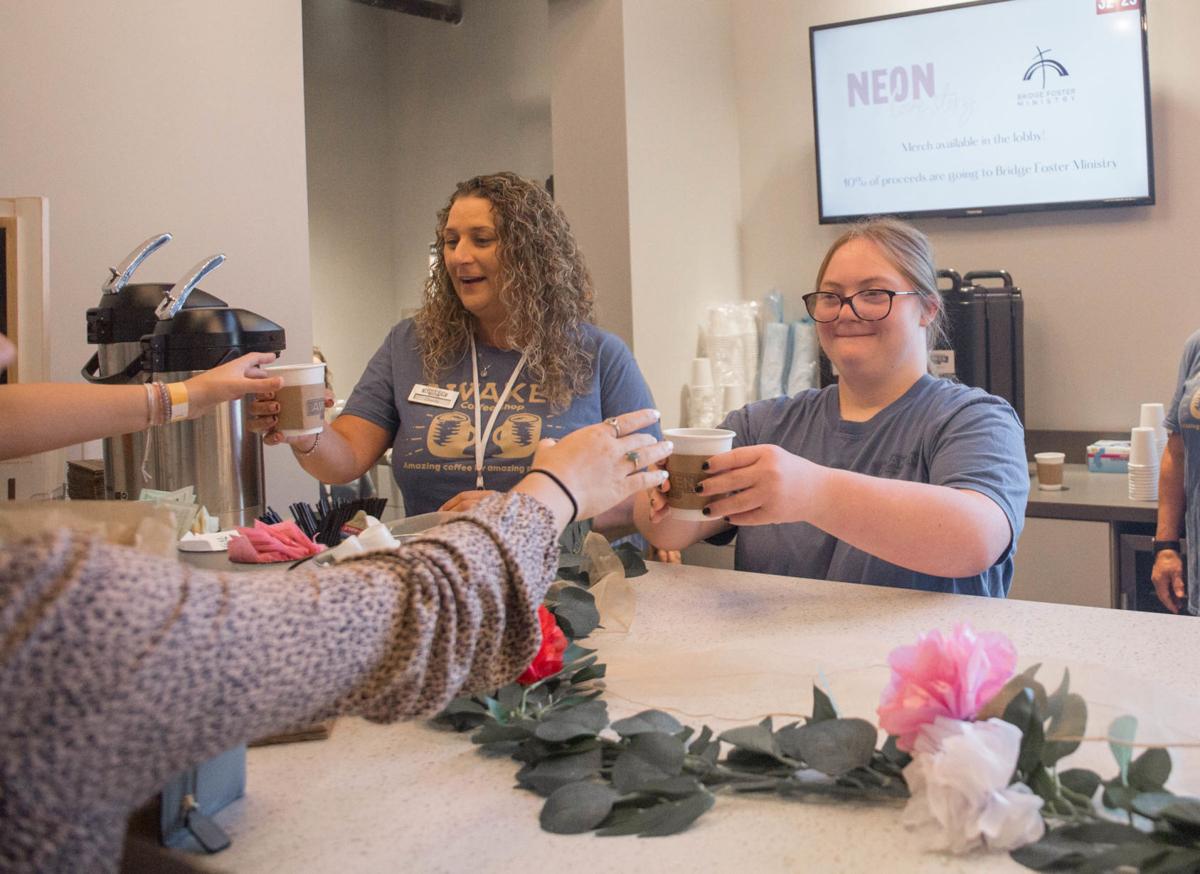 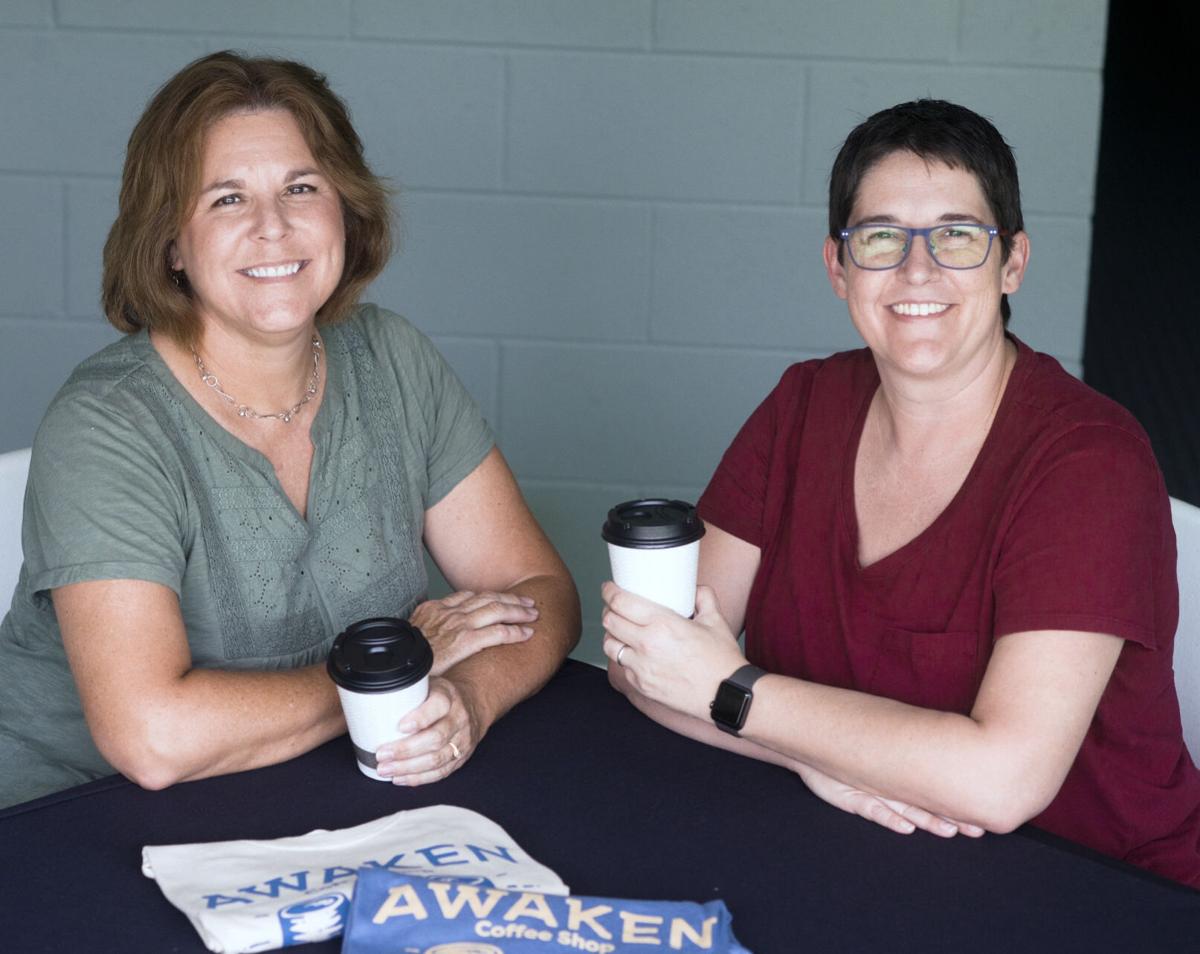 Carol Preston, left, president, and Jennifer Dyson, vice president and treasurer of Lives of Purpose, formed the nonprofit organization to open Awaken Coffee house, which will employ people with intellectual and developmental disabilities.

Macayla Cayton volunteers with Awaken Coffee. She is hoping to work at the shop, which will employ people with intellectual and developmental disabilities when it opens at Evans and 14th streets. “It will be more inclusive than a lot of other places,” Macayla said.

Carol Preston, left, president, and Jennifer Dyson, vice president and treasurer of Lives of Purpose, formed the nonprofit organization to open Awaken Coffee house, which will employ people with intellectual and developmental disabilities.

Businessman Phil Flowers had an idea percolating for a while — the thought that what the office building he owned could really use was a cafe.

Unknown to him, nonprofit president Carol Preston was spending her time poring over a different challenge — finding a suitable location to open Awaken Coffee, a shop to employ people with special needs.

When Preston made a connection with Flowers and his son, Aaron, who has Down syndrome, they knew that the two initiatives could come together to create a perfect blend.

On Tuesday, more than two years after its launch, the nonprofit organization Lives of Purpose unveiled its plans to set up shop for Awaken Coffee at the newly named Heart for ENC Nonprofit Business Center at the corner of 14th and Evans streets. About 200 people, including financial donors, volunteers and potential employees, gathered at Rock Springs Center for the announcement.

“People would ask us where we were going to open and we would say, ‘Well, we’re praying over this particular location, but if someone were to offer us a building’ …,” Preston said in an interview. “(We were) saying it tongue in cheek, never dreaming that someone would offer us a building.”

Flowers’ offer, to rent space to Awaken for a dollar a year for five years, frees the nonprofit organization to direct its $500,000 fundraising campaign to renovations, equipment and other start-up costs for the shop, which expects to employ as many as 20 special-needs adults.

Awaken follows the model of similar stores across the state and nation, including Esteamed Coffee in Cary and A Special Blend in Greensboro. Among the best known is Bitty & Beau’s of Wilmington, which now has franchise locations in nine states.

It was on a visit to Bitty and Beau’s that Preston, who has a nephew with Down syndrome, first began considering opening a coffeehouse. Fellow Unity Free Will Baptist Church member Jennifer Dyson, whose son has autism, helped Preston create the concept for Awaken, which will serve to enrich the lives of people with intellectual and developmental disabilities by training them for employment.

But for teens and adults with intellectual and developmental disabilities, the goal of having a job often remains out of reach. Some estimates indicate the unemployment rate for this population is as high as 70 to 80 percent.

Awaken, which plans to have 20 special-needs volunteers in addition to its employees, is designed as a starting point, offering training and experience to help prepare people for other employment.

Flowers knows from experience what having a job has meant to Aaron, 42. Before the COVID-19 pandemic forced many restaurants to close their dining rooms, Aaron had worked as an attendant and greeter at Jimmy John’s.

“He developed a real following,” Flowers said. “Aaron has got a natural ability for that. He loved his job. Their job is the most importing thing in their life.”

Amy Soderstrom has seen what a difference participating in Vidant Medical Center’s Project Search, a one-year internship program for students with developmental and intellectual disabilities, made to her son, Isaac.

“I see a real sense of pride in him when he wakes up in the morning and puts on his uniform,” she said. “He really likes to have a job to do.”

The Soderstroms, along with Charity and Macayla Cayton, shared their support for Awaken via videos shown at Tuesday’s gathering. Both families were interviewed for the occasion by Jackson Robol, a Ayden-Grifton High School senior who has autism and hosts his own internet talk show.

Charity Cayton said she believes that experience at Awaken could help her daughter develop soft skills that can be important in a future workplace.

“You really want your child to be able to kind of test their boundaries and grow and become the kind of person that you, as a parent, have always known they can be,” she said.

Macayla volunteered with Awaken on Saturday at a women’s conference at Integrity Church, one of few promotions for the organization since COVID-19-related shutdowns began a year and a half ago. During that time, Lives of Purpose canceled the majority of its events to protect special-needs volunteers, including some who have compromised immune systems. Though the delays were frustrating, Preston said she was grateful that the coffee shop had not opened prior to the pandemic.

“I’m so thankful God’s got the big picture,” she said. “We were thankful we weren’t open because then we would have to deal with employees who were wanting to come to work but were not able to. They would have just started being able to work, feeling that self-worth, and then they would have had to go back home.”

Dyson said some of the down time also gave the organization a chance to do some behind-the-scenes work, including making plans to renovate a space for the shop. Located in an enclosed breezeway between two buildings at 101 W. 14th St., it will feature seating for 16 people outside and 30 inside, with additional conference room space that could be reserved for large groups. What the building will not have is a drive-through window.

“We don’t want to do that,” Dyson said. “This is all about interaction with employees, not a quick come in and get your coffee and get out. It’s a really great way to bring a lot of communities together, the special needs community, the nonprofit community and then just the general population.”

“Having Awaken there will be great for us,” he said. “A lot of the organizations there will hopefully use the space to meet and it will just be a place where the community comes, too.”

Bradsher said some people might question why the coffee shop would elect to open in an office building. But the Wilmington native said Bitty & Beau’s has thrived despite its atypical location, behind a car dealership.

“It’s because of the mission, really,” Bradsher said. “People can go anywhere in town to get coffee. You wouldn’t want to come to this strange building, but if you come there for the mission, it makes perfect sense.”

Already, Awaken’s mission is drawing wide support. Lives of Purpose has been awarded more than $20,000 in grant funding through Wells, Perkins, West grants to purchase some of the major equipment it needs for the coffee shop. Vidant Community Benefits grants program has awarded the organization a $5,000 grant to pay its employees while they are being trained. Preston and Dyson estimate they have had contributions or pledges of about $200,000 in in-kind services, from marketing and photography to construction and engineering.

Some volunteers, including an architect who has donated his time, have children with special needs.

“There are very few people that are not affected in one way or another by somebody with special needs,” Preston said. “Almost all of us are affected.”

For two years, she has received emails and phone calls from parents who are hopeful that their adult children will be able to able to work at Awaken, although no opening date has been set. That, Preston said, is evidence of the need for such a place.

“Yes, the special-needs community needs it, but I think Greenville needs it more,” she said. “We need to connect with people more and that’s what we’re going to promote is just connections with people.”