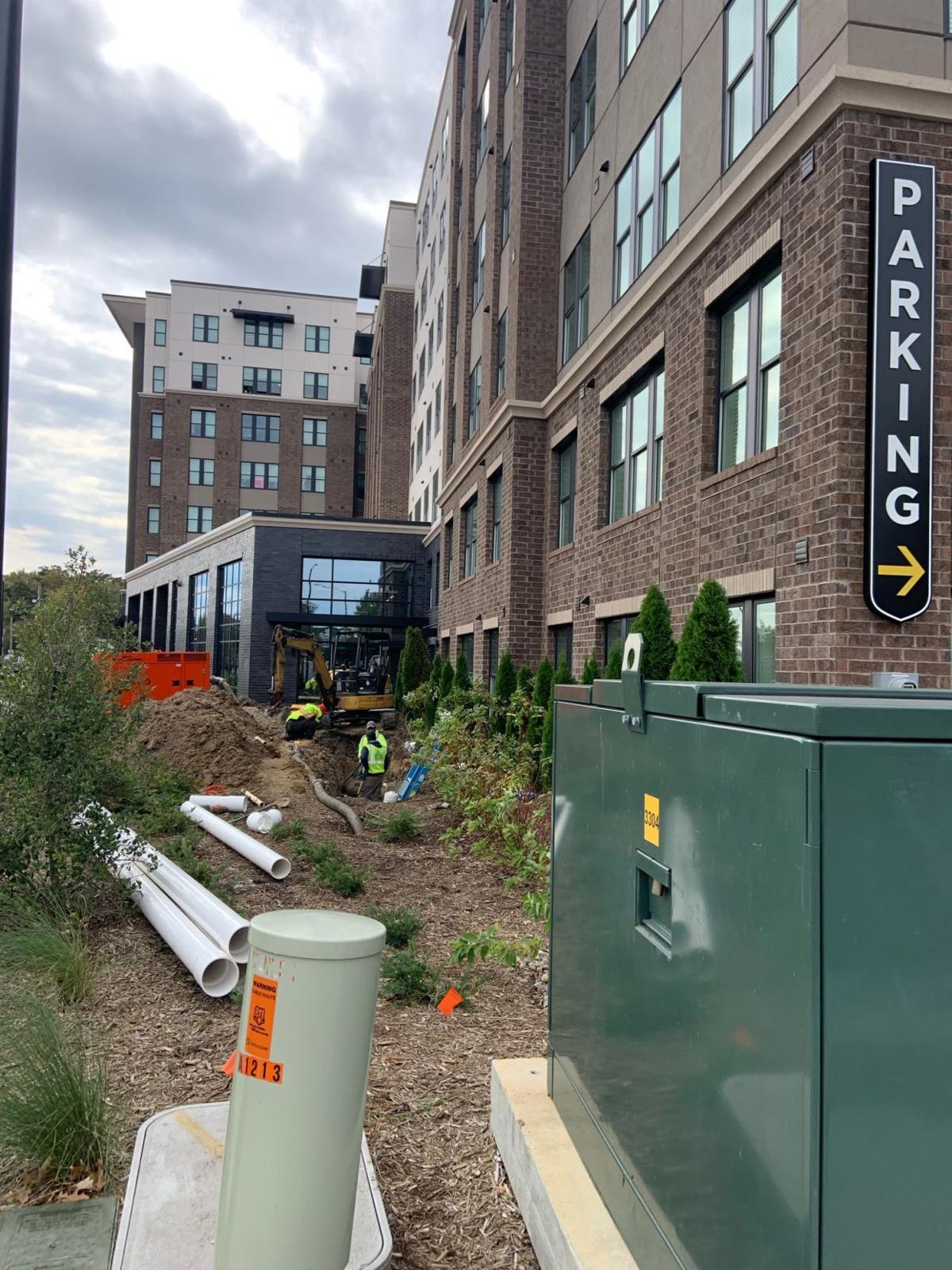 Crews work at the Jolly Roger Apartments in Greenville in November. Some students at the complex report multiple leaks and unfinished areas in the structure. 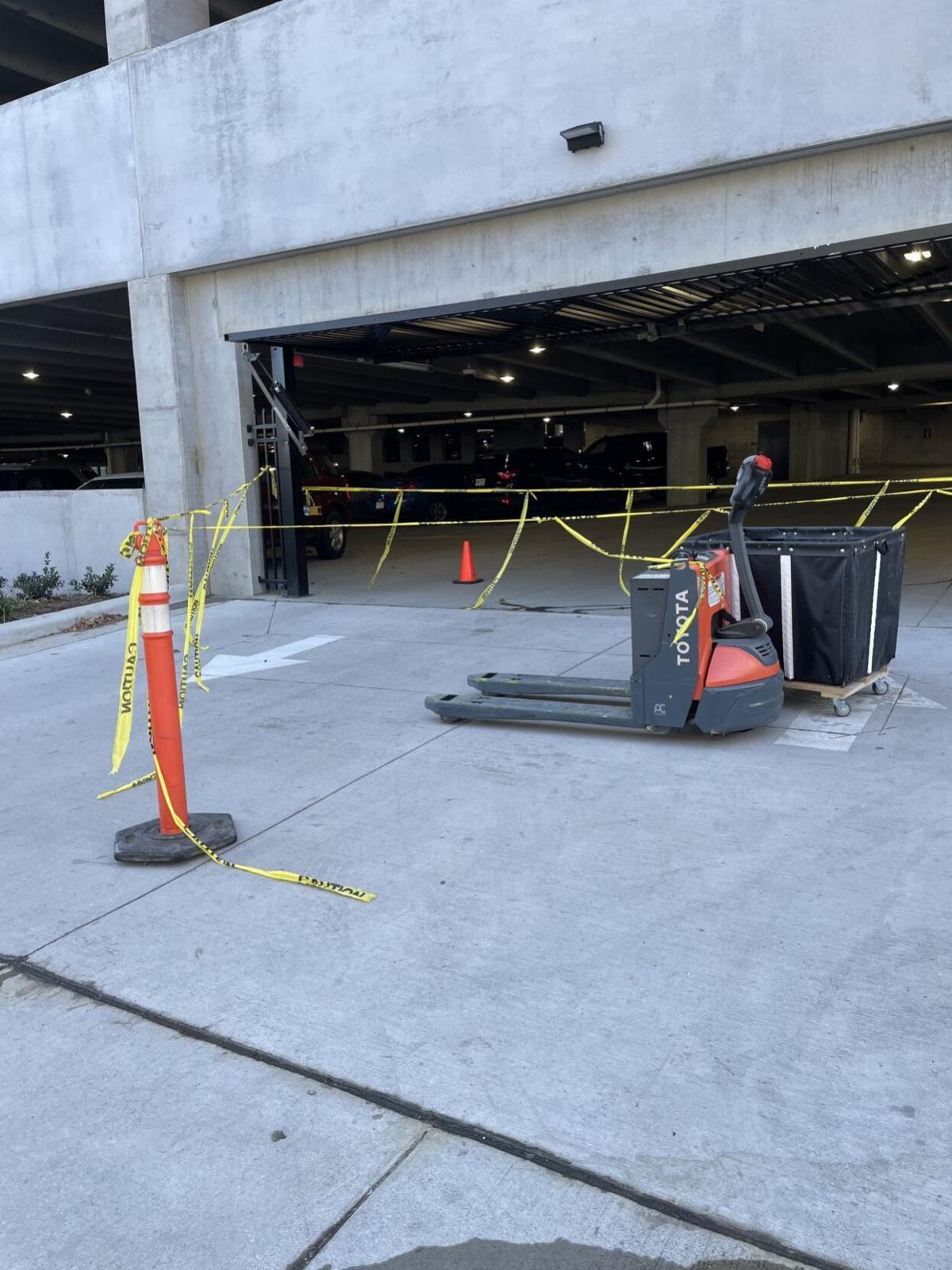 Maintenance is ongoing at the parking garage of the Jolly Roger in December.

Crews work at the Jolly Roger Apartments in Greenville in November. Some students at the complex report multiple leaks and unfinished areas in the structure.

Maintenance is ongoing at the parking garage of the Jolly Roger in December.

Plumbing and infrastructure issues continue to cause discord at a Greenville student housing complex.

Residents at The Jolly Roger Apartments say pipe leaks are an ongoing issue. Documents obtained by The Daily Reflector show that leaks and moisture damage were recorded in the building as early as June, two months before students moved into the building.

The Jolly Roger, located at the corner of 14th Street and Charles Boulevard, opened on Aug. 10. Residents said the seven-story, 804-bedroom complex looked like a dream student living situation, featuring a rooftop pool, 55-inch televisions in every room, a gym, cafe and study rooms.

But for some, the structure hasn’t lived up to expectations. And a document from October shows 28 vacant units in the complex.

An intern’s log from June 3 detailed leaks at the structure.

“Lots of leaks occurred due to the rain so we spent the remainder of the day tending to them,” the log said.

The log on June 2 said that a supervisor sent the intern to take pictures of each corridor HVAC unit, due to an issue with the way fire protection systems were installed.

Documents from August, October and November are consistent about moisture in walls, ceilings and floors. The documents were provided by a current resident, who found them in a second floor lounge which was open to students at the time. He said that he provided the documents out of a sense of frustration at continued construction, room changes and lack of support from management at the building.

An environmental field report from Oct. 12 on one of the building’s second floor lounges said that prior to air sampling, an infrared camera showed wet spots in the ceiling in the area of previous leaks. Moisture was classified as “100 percent” and a note was made to remove the ceiling in a marked area, as well as the wet insulation, to identify the source of the leak.

A report from Aug. 27 shows that a then-vacant unit on the second floor had “obvious moisture/water damage on the south wall/toilet and vanity. IR camera shows water damage on wall and ceiling. 100% moisture (remove floor to ceiling.)”

The same unit’s living room had a 24-by-24-inch spot of moisture on the wall and ceiling, the report said, and was classified as 86 percent wet. The bedroom also had water damage on the walls, which required removal of the drywall and baseboards.

The report said the hallway and another bathroom in the unit also had moisture damage. An odor was noted..

According to a document titled “Moisture Control Guidance for Building Design, Construction and Maintenance” published by the Environmental Protection Agency, a study by Lawrence Berkeley National Laboratory shows that building dampness and mold raise the risk of a variety of respiratory and asthma-related health effects by 30 percent to 50 percent.

Tom Barnett, director of planning and development services for the City of Greenville, said that the city would not require an environmental field report for coding purposes and that it is likely the owners pursued such reports on their own, following sewage and leak incidents reported in September.

Karliyah Parker, a sophomore nursing student, said that she has had to move a total of five times since August due to leaks and sewage problems. Roommates have moved with her four of those times. Her first move came on Aug. 22, weeks after she moved into the building’s fifth floor, when water containing sewage began leaking into her room from a toilet. She said management told her they had fixed that issue.

Parker moved back to her original apartment weeks ago after bouncing between units. But water leaked into its breaker box overnight, she said. There was a power outage and management did not pick up calls for emergency contact.

“The power went out that night and we were given a temporary room at 4 in the morning,” Parker said. “No one is going to move at 4 a.m. We could not get a hold of anyone. We were calling the emergency number for hours. When they did finally come, they tried to offer us a room which we declined since it was 4 a.m. The next day they offered it to us and we took it.”

Parker said she and her roommates received compensation in the form of a $500 Visa gift card. A month’s rent for a four-bedroom apartment is about $700. Other residents said that the virtual gift card can only be used online, making it inapplicable for rent or other bills

Another student, Caitlyn Lowe, said that she also has made five moves during her time at the Jolly Roger. Her first displacement came in August, shortly after she moved in, due to water and sewage issues. Her most recent move came last week due to a persistent leak in the ceiling of her unit’s kitchen. She said her mother attempted to contact the building’s management but had not heard back.

Jessica Andersen had to move out of her apartment for five weeks due to mold issues and a floor replacement. There was mold in the drywall in the unit’s laundry space, she said. Andersen said she also received a $500 gift card, but only after she pressed the issue.

Another resident reported a flooded living room. He said maintenance did not give a specific cause but told the residents it was their fault.

“They just said they cannot figure out where the flooding occurred so (they are) trying to make us pay,” the resident said.

Garrett Frushour, a junior, said that the building is more a work site than a living space.

“Every single day is a full blown construction zone,” Frushour said. “It is not just like normal, new construction. I had lived at another new construction building when it first opened and the issues we had there were much more normal. A cabinet missing a handle, paint chipped. Here it is like night and day, with (issues like) walls flooded.”

Parker and Andersen said that they did not receive assistance from management with their moves aside from carts being provided.

Since she moved in, Parker said she has had to drop two classes in her nursing program. She said sophomore year is crucial for staying in the program and that she attributes her need to drop classes to the stress of constantly moving or having room issues.

In September, Jordan Minshew said he had to cancel his enrollment at ECU after his apartment flooded with sewage and he was forced to commute between New Bern and Greenville. At that time he was attempting to get out of his lease.

Photos from residents show gym equipment covered in caution tape. A resident said that gym facilities were still not set up as late as October, but Frushour said they now are open.

Andersen, Parker, Lowe and another resident who preferred to remain anonymous said the amenities promised on the apartment’s website were big reasons for their signing a lease. The anonymous resident said that signing bonuses were a big draw for her, including free parking and merchandise like coolers or televisions.

“I was very interested in the gym, the study rooms, the fact that there were going to be whiteboards in the study room,” Lowe said. “I was like, ‘Wow, this is going to be great. And then there is nothing. No printers. One of the study rooms on the second floor is now an office for construction. We cannot even use it.”

Andersen said that, during the time of her move, when she questioned leasing about compensation she was told she was paying for a 4-by4-foot bedroom, not the amenities.

“I am just sick of living in a construction zone,” Frushour said. “I can tell that the building was more than not ready for us to move in.”

Barnett said that the building is under a temporary certificate of occupancy as repairs continue.

“They had some problems and they are repairing them,” Barnett said. “In our opinion, all of the affected units have been vacated or were vacated at the time of the incident. The owners are spending a great deal of money to bring those units back in the way they should be.”

William Mills, the city’s chief building inspector, said that Greenville crews are at the site at least twice a week to monitor repairs.

“They are under a temporary CO,” Barnett said. “We issue those all the time. That means that all health and safety issues have been addressed and the building is safe for occupancy, but there could be outstanding issues. That is why it is temporary.”

“CO temporary is when all the health and safety items have been checked off,” Barnett said. “Fire, exit lights, everything you can imagine is in good working order. … We make sure that it is safe for occupancy from that point. The CO is issued when the last 10 percent is completed.”

Earlier this year, management sent an email offering a free month of rent in December for those who re-sign, but those affected by the damage said they do not plan to do so.

“I would say a majority have not had a good experience with this place,” Frushour said.

Residents provided information and footage of the following other concerns as well:

CA Management Services, which manages the Jolly Roger, released a statement to inquiries made by The Daily Reflector.

“New development construction projects occasionally experience items that require additional attention,” the statement read. “We are fully aware of our residents’ concerns and are working diligently with our contractors to remediate each matter.

“We have a dedicated team of contractors systematically working throughout the building to address all issues. Our residents are our top priority and our management team is on-site to assist in all aspects of the remediation process. The Jolly Roger is and will continue to be an integral part of the ECU and Greenville communities, and we are looking forward to a great year.”

A request for CA Management to elaborate on information from the documents was made on Nov. 22. No response was provided.