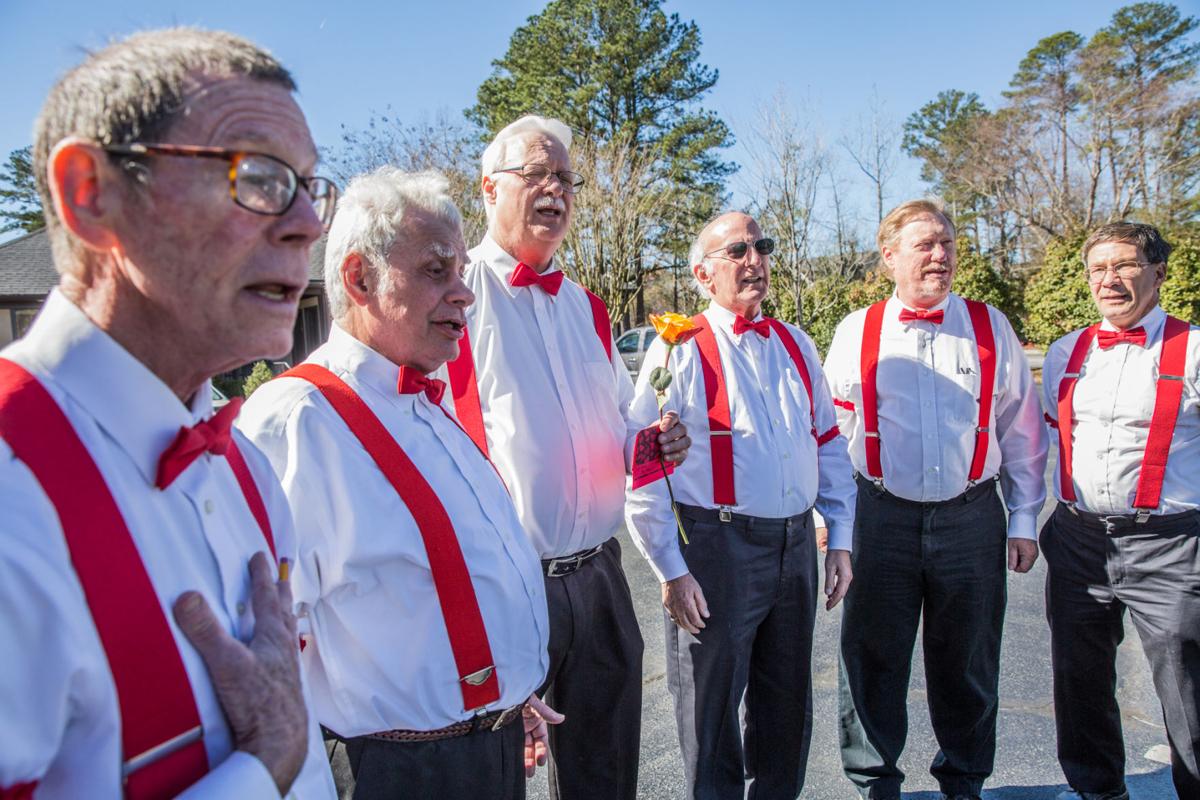 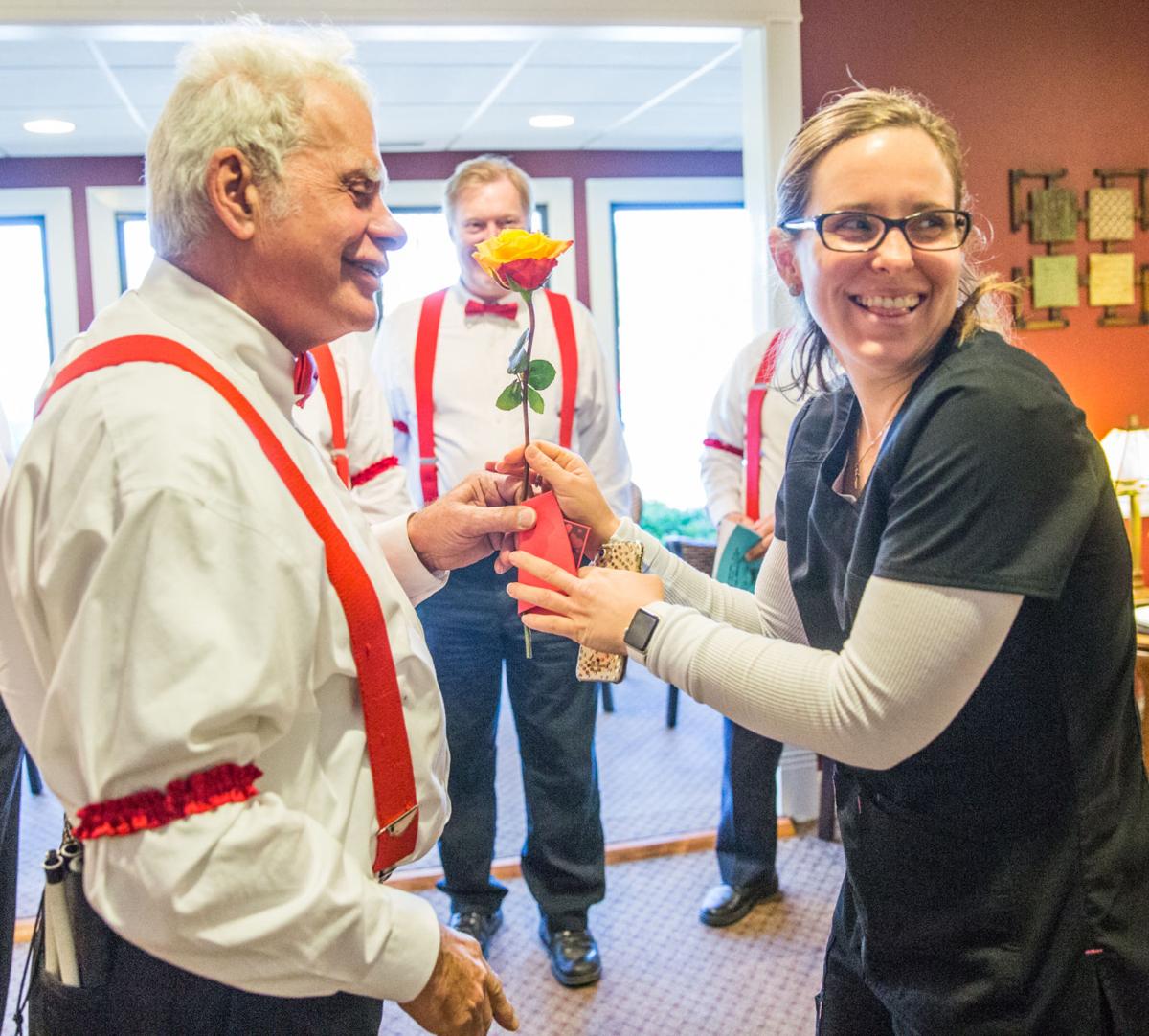 Laura Davila receives a flower from the Carolina Chord Connection Barbershop Chorus before the group performs for staff on Feb. 13, 2017. 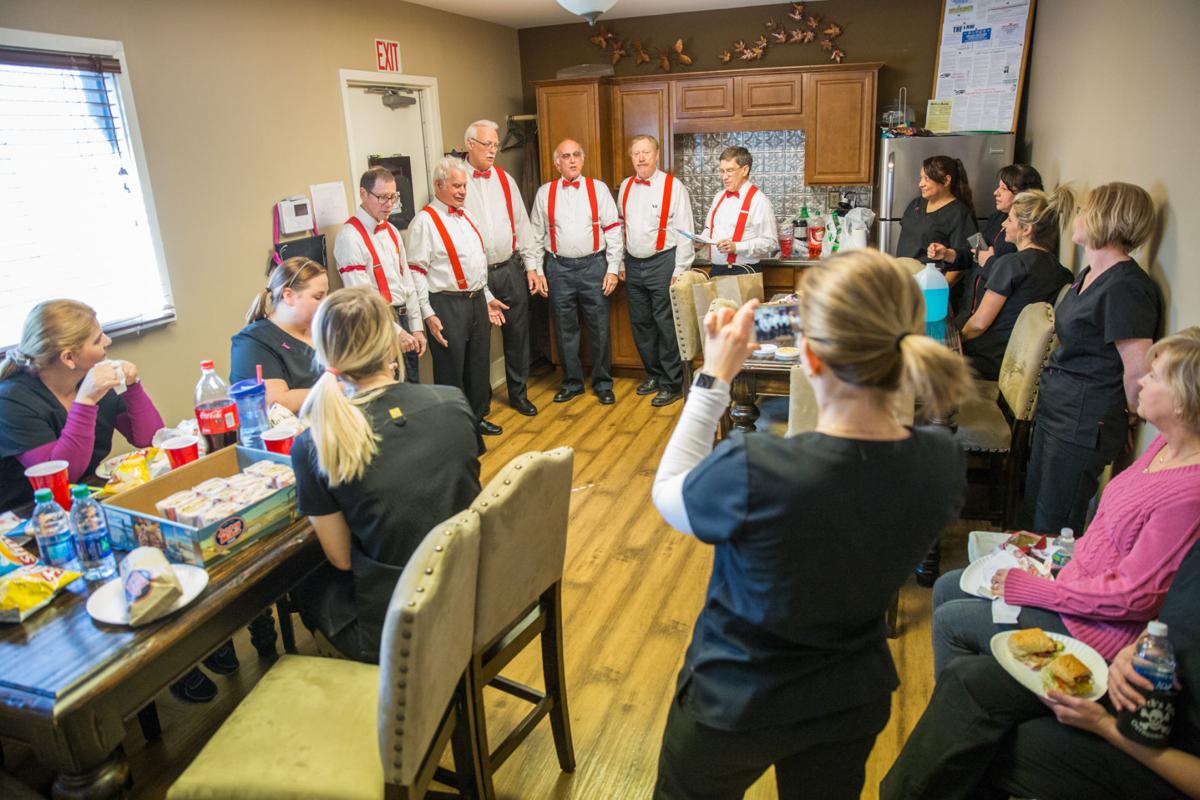 Laura Davila receives a flower from the Carolina Chord Connection Barbershop Chorus before the group performs for staff on Feb. 13, 2017.

Howard Shokler of Greenville scored some “big-time points” with his wife while manning his booth at the Uptown Greenville Umbrella Market a few years ago.

“I saw these guys dressed all funny going around and singing,” Shokler said of a barbershop quartet with the Carolina Chord Connection Barbershop Chorus. “I asked them if they did any romantic music, and when they said ‘Yes,’ I called my wife up on the phone and they sang to her. ... I scored big-time points that day.”

In fact, Shokler scored so many points that he joined the group and has been performing with them ever since.

“I was hooked after that,” Shokler said Monday after performing at the Davila & Velazquez dentist office at 120 Oakmont Drive. “Now I go around dressed like one of them.” (Story continues below video)

The members of the Carolina Chord Connection will be out performing barbershop quartet-style singing valentines today, which the group has done for the past four decades.

“I’ve been involved with this since 1978,” Don Wigent said. “But they were around long before that. I’d say that this group has been around at least 40 years ... but barbershop music has been around a lot longer than that.”

Barbershop vocal harmony, which was revived in the 1930s, is a style of a cappella close harmony, or unaccompanied vocal music. Barbershop music generally is performed by either a barbershop quartet — a group of four singers — or a barbershop chorus, which closely resembles a choir.

The Carolina Chord Connection is the local branch of the Barbershop Harmony Society — also called the Society for the Preservation and Encouragement of Barber Shop Quartet Singing in America Inc. (SPEBSQSA) — a national organization to promote and preserve barbershop music as an art form.

“We usually just give people the acronym for the organization,” Shokler said, laughing. “But even that is too long for most people to remember.”

The more than 25 members of the Carolina Chord Connection will travel out in groups of four to sing valentines today throughout Greenville.

“We have more than 25 gigs booked today,” member Jack Fisher said. “We are always busy on Valentine’s Day, and it’s something we look forward to every year.”

The group charges $40 for an in-person singing valentine or $25 by phone. The money for singing valentines goes toward the group’s operational costs. The nonprofit organization also performs throughout the year at various local events.

“We perform at a lot of nursing homes in the area and for groups like the Rotary Club,” Rick LaBrune said. “We also sing at ECU basketball games each season. These are always for free; we aren’t doing this for the money. ... We are doing this because it is a lot of fun.”

The group also does an annual benefit concert for local organizations. Proceeds from this year’s concert will benefit the Community Crossroads Center, 207 Manhattan Ave.

“We are just trying to give back to the community,” LaBrune said. “We love doing it because the people in the community are very appreciative.”

Shokler said the group meets every Monday at 7 p.m. in the Jaycee Park Building Auditorium, 2000 Cedar Lane, and invites anyone interested in the group join them. No singing experience is required, he said.

“I never did any singing before, and I came out and joined the group,” Shokler said.

“We still can’t figure out why he keeps coming back either,” member Kurt Stork added, laughing.

LaBrune described the group as a bunch “of jokesters” that name their individual quartets things like “The Tuneatics” and “Silver and Old.”

“We just enjoy having a lot of good, clean fun,” he said. “And when we are all out together at restaurants or something, we will just bust out in song if we have all the parts represented ... people love it.”

Wigent said nothing beats the classics when it comes to the songs the group performs.

“Some of these songs are about 100 years old or more,” Wigent said. “But people still love them. ... We get women to cry all the time when we go out to sing.”

“Especially when we are off key,” member Ben Harris said, laughing.

Wigent recalled one visit to a home where a husband got the group to come and sing for his wife.

“After we finished, she looks at us and says, ‘I think my husband is trying to get somewhere, and I think he just might,’” he said. “That’s when we knew we did something right.”

For more information about the Carolina Chord Connection, visit www.carolinachordconnection.com.