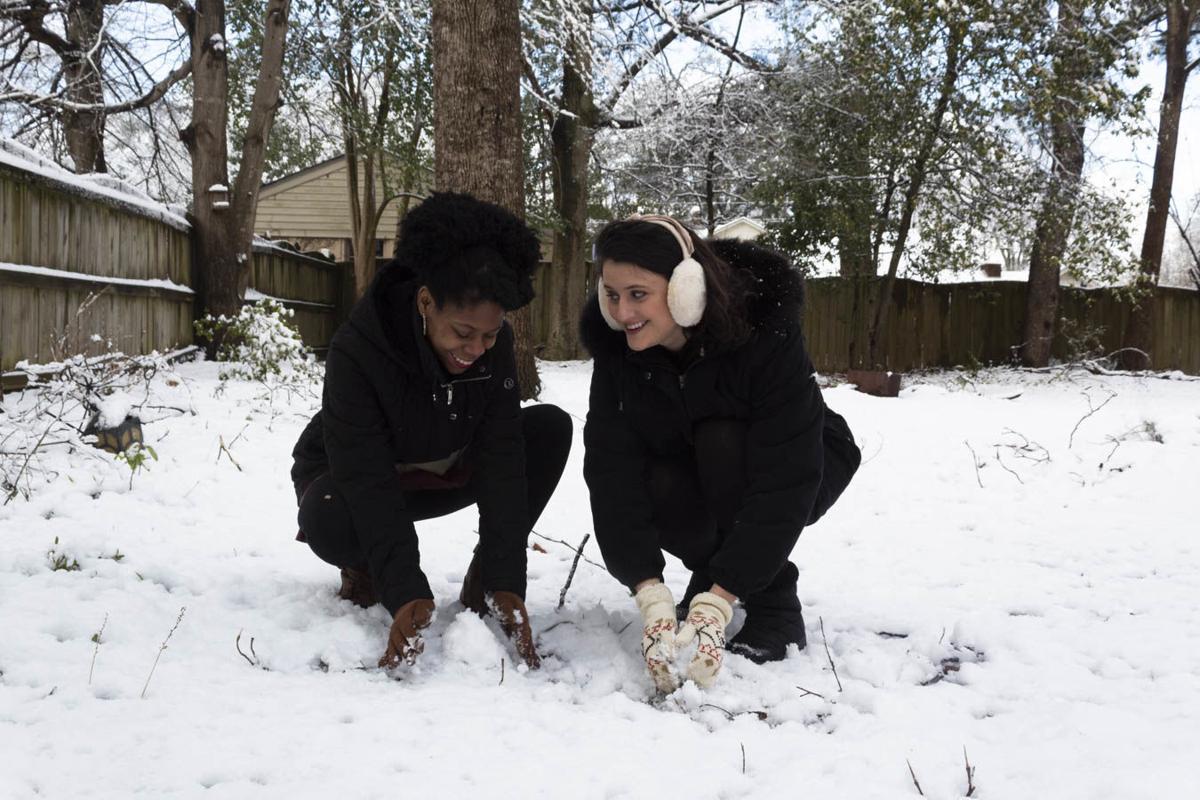 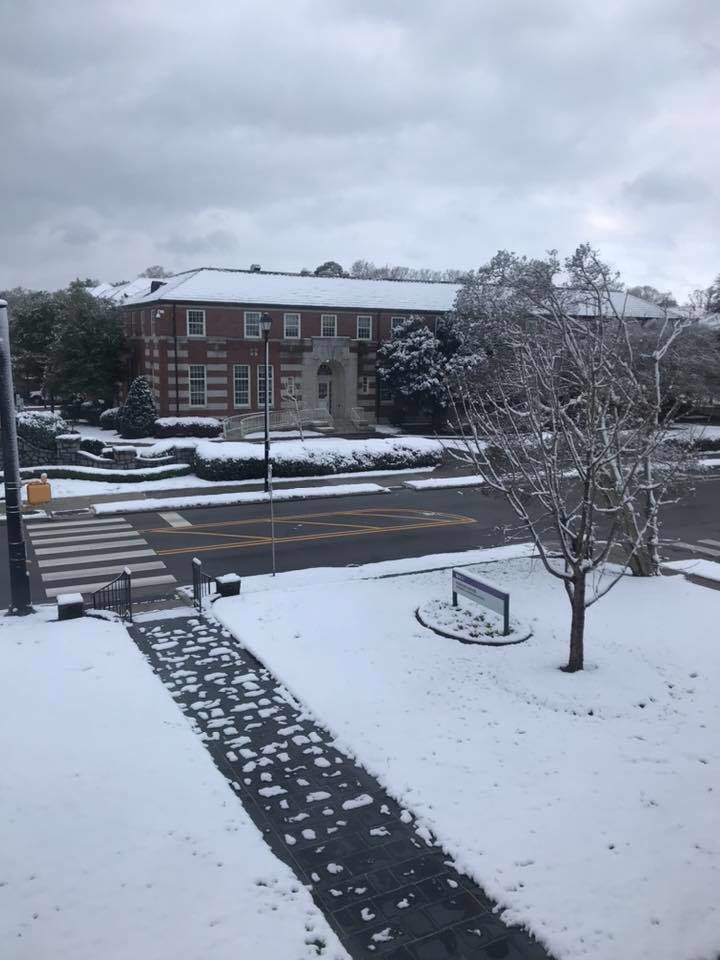 Snow covers the ground near the Spillman Building off of Fifth Street at East Carolina University in Greenville on Friday. 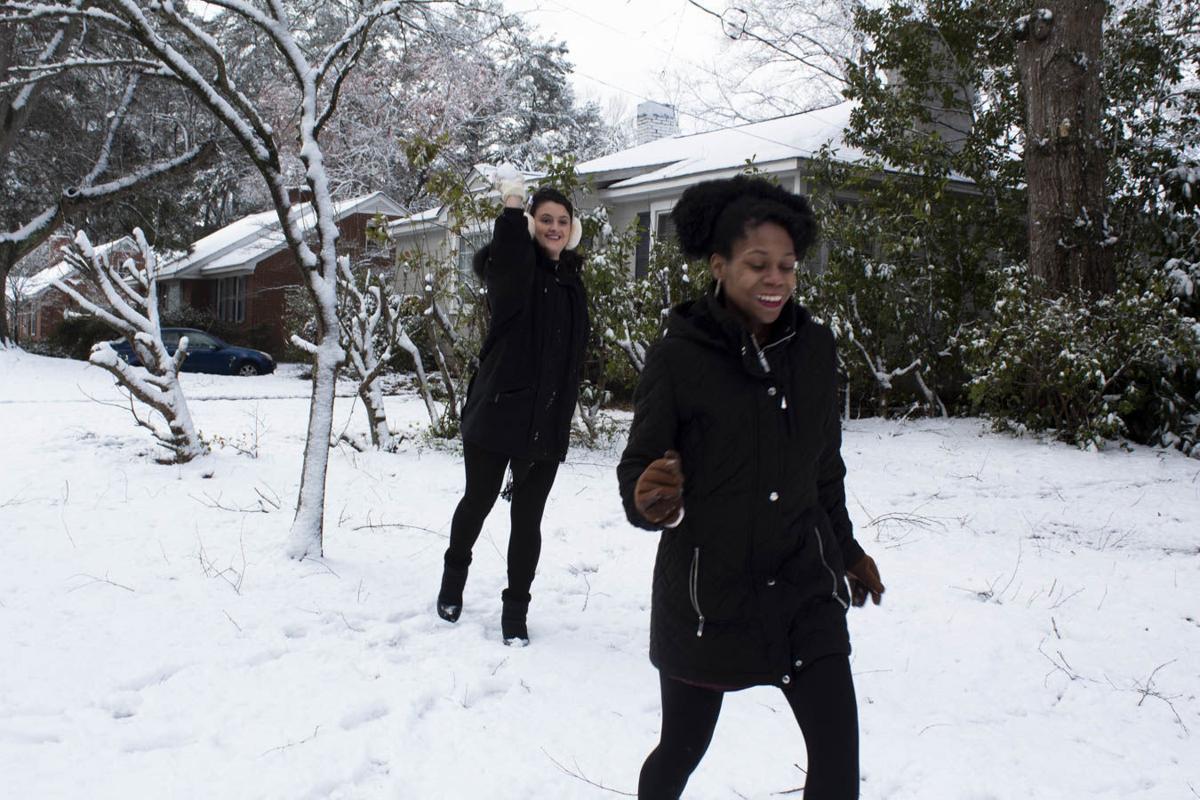 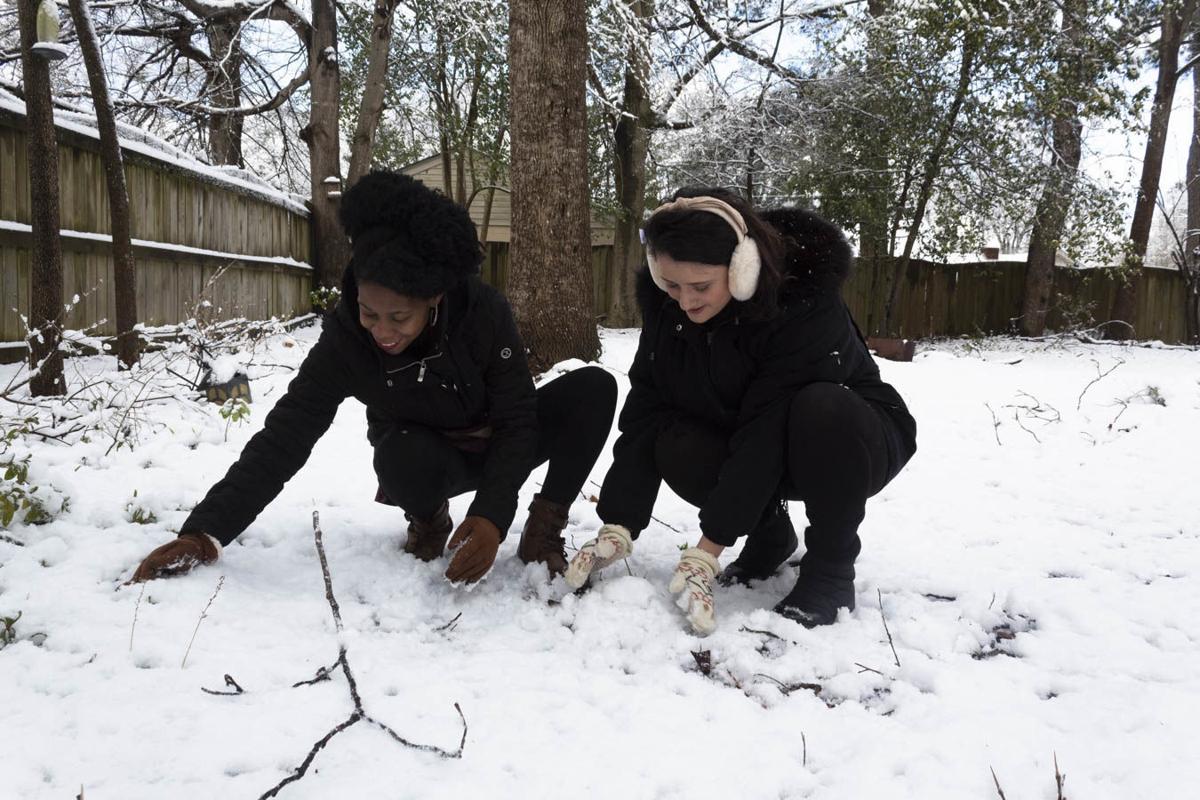 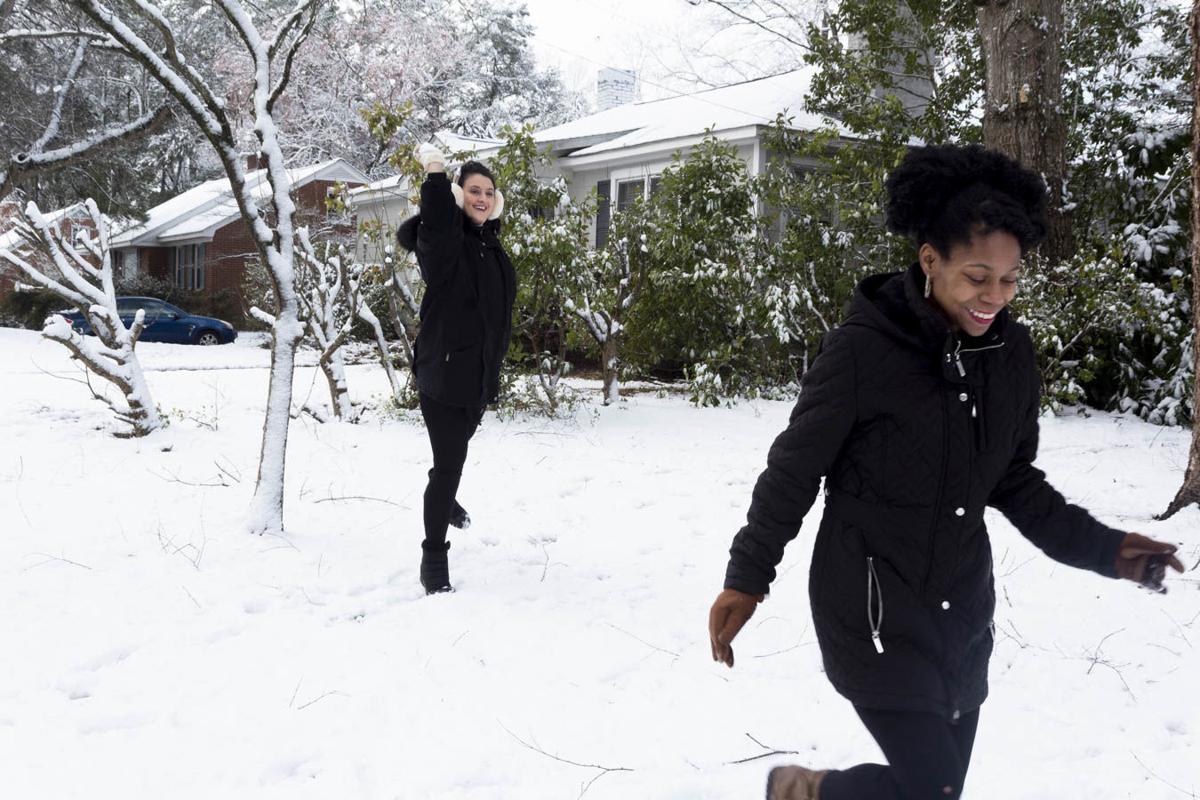 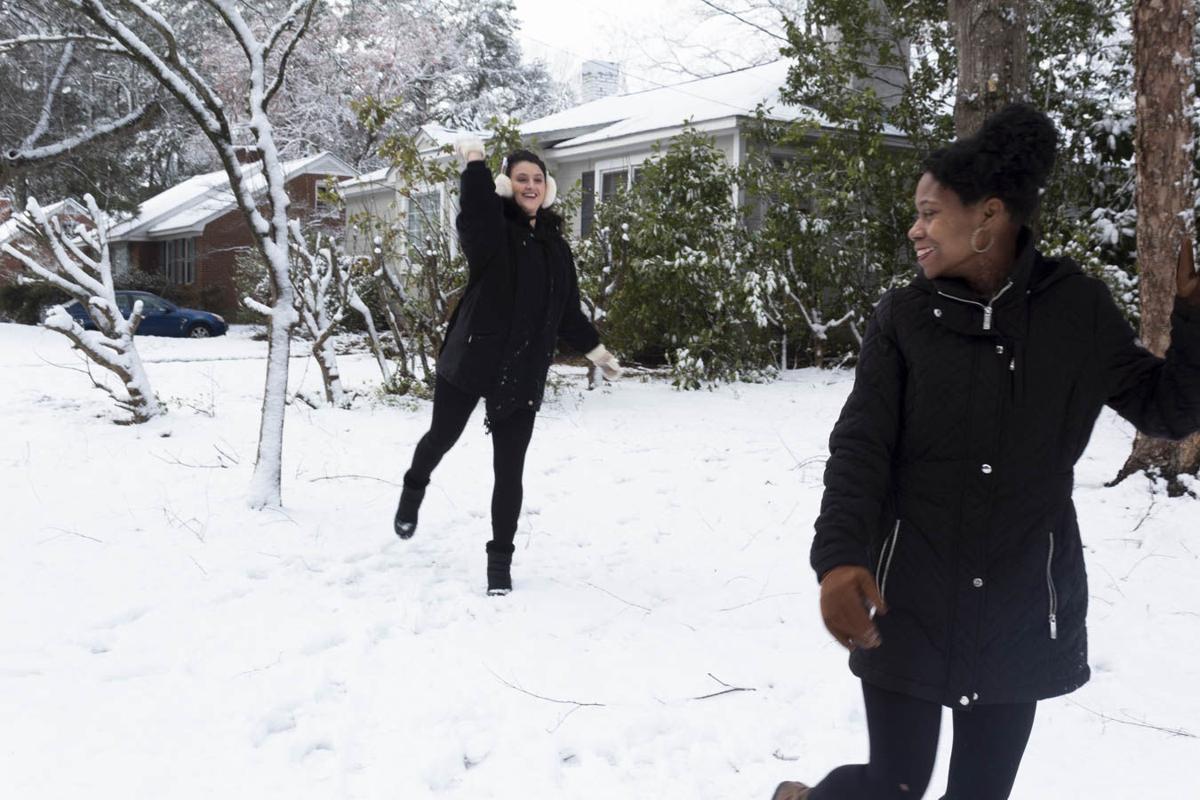 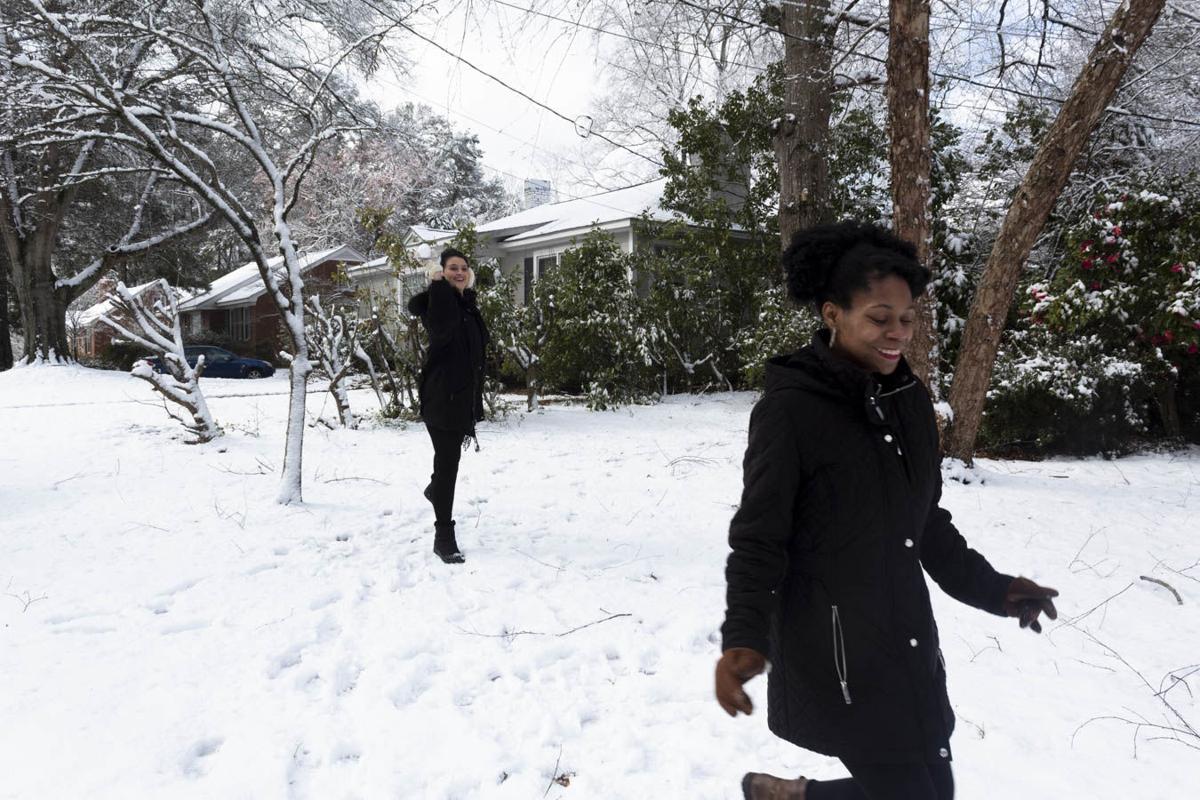 Snow covers the ground near the Spillman Building off of Fifth Street at East Carolina University in Greenville on Friday.

Between 3-4 inches of snow fell overnight in the Greenville area but warmer temperatures helped keep the roads largely clear, according to the National Weather Service.

Snow began falling in the area Thursday afternoon, prompting many cancellations and closures. By 9 p.m. many roads were covered with slush, and authorities worried about that slush freezing over.

"I think what saved us was the warm ground temperatures that happened prior to the storm," said Ryan Ellis, science and operations officer with National Weather Service in Newport. "The ground was pretty warm so even as stuff was falling it wasn't accumulating as much on the roads themselves, and then it took a very long time (for temperatures to drop) and then it barely reached 32 degrees, so it just didn't have enough time to the freeze."

By daylight Friday DOT and municipal crews had worked to clear what had accumulated and temps rose back above freezing. Authorities reported few serious traffic problems or other issues.

The crews were mostly spreading rock salt and sand over bridges and overpasses and shady spots and trouble areas, he said. They also plowed snow off where it was needed, but there was no more than about 1 inch of snow accumulation on the roadways.

All of the primary routes were largely clear Friday morning save a few icy patches, he said. Crews later on Friday are focused on secondary roads which were mostly clear by noon.

"We think the sunshine today will pretty much clear the snow and ice from the roads in Pitt County," Barksdale said. "People, however, should be cautions overnight and tomorrow morning for the potential of black ice, especially near bridges or stretches of roadway that get mostly shade. Again, we’ll have more sunshine and warmer temps tomorrow."

The timing of the storm overnight also meant that it did not affect heavy drive-time commutes on Thursday, Ellis said, and decisions by public schools to cancel class Friday along with delays by East Carolina University, Pitt Community College, local government and others helped keep traffic to a minimum this morning.

"However, I will say this, tonight is going to be colder than last night, and so anything that remains on the road, you could have some patchy black ice in the morning for sure," Ellis said.

Higher temperatures and wind Friday should help dry surfaces, but any pooling and remaining moisture, especially on elevated surfaces, will turn to ice, he said. Temperatures tonight are expected to drop into the low 20s.

The snowfall Friday covered lawns and landscapes across the county, giving school children a chance to play in it some on their day off. Weather service volunteers reported varying accumulation ranging from a high of 3.7 inches in town to 3.2 inches northwest of town, to 3 inches a mile south of Dowdy-Ficklen to 3 inches in Winterville to 3.8 inches in Farmville.

Late season snows are not unusual for the region, according to weather service data.

Ellis said late season snows do seem to be a norm for the region, although but it's not necessarily a trend.

You know, it does seem like as we get into the February months, lately, that this has been happening more and more. I think it's just kind of a coincidence. ... We're still in those winter months. So anything climatologically can happen. This year we had warmer conditions in December and into January so we didn't get anything, and finally we got that storm track to line up where we could get one of these with enough cold air to give us the snow."