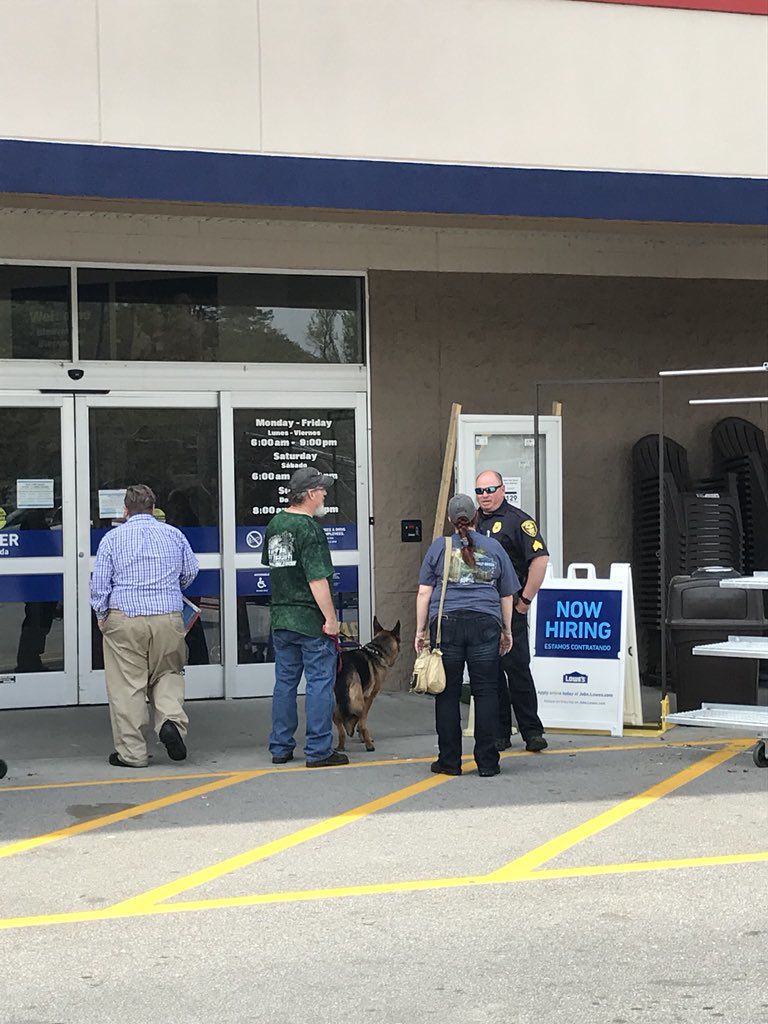 An officer from the Greenville Police Department discusses the city's "Stay at Home" order with customers at Lowe's during the weekend. 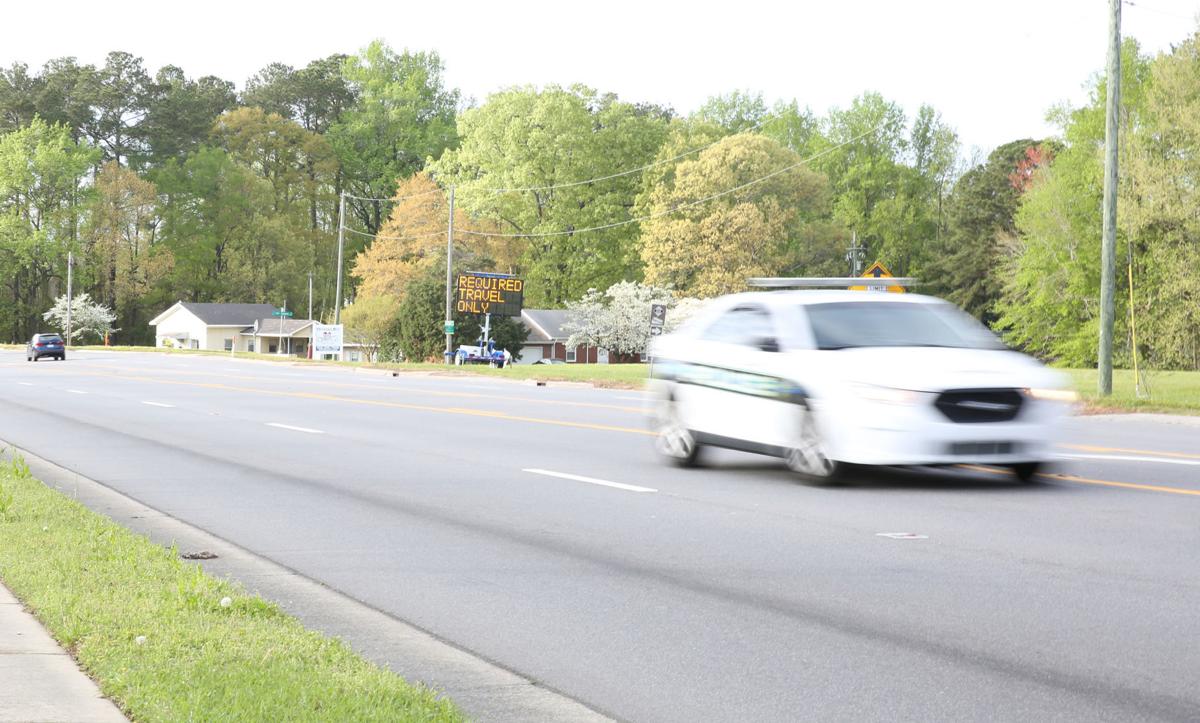 A sign on East 10th Street reminds motorists to heed COVID-19 restrictions with messages that say "Stay Home" and "Required" travel only. 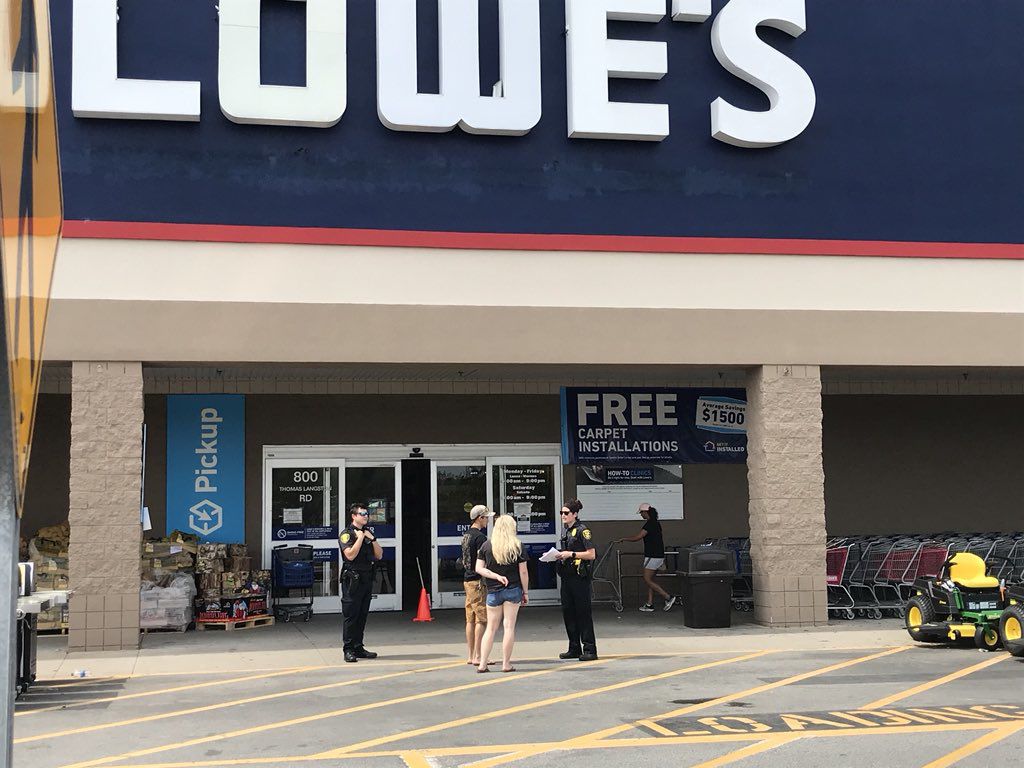 Officers from the Greenville Police Department discuss the city’s Stay at Home order and social distancing with customers entering Lowe’s over the weekend. 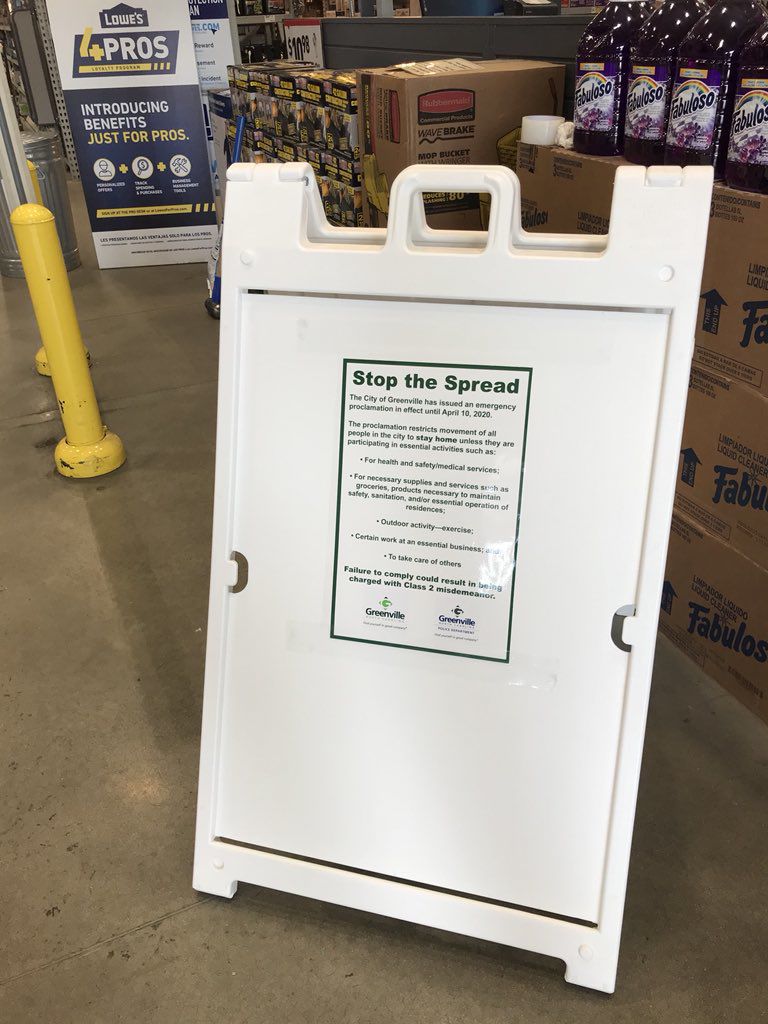 A sing in front of Lowe’s in Greenville asks residents to stay at home unless purchasing essential items. 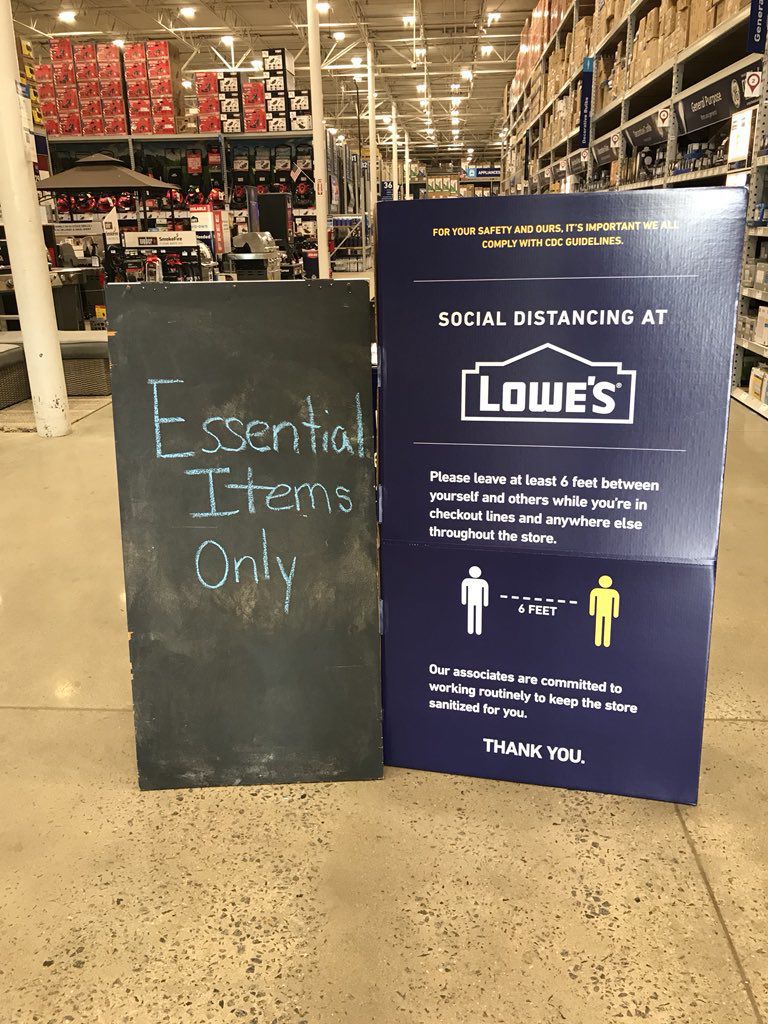 A sign inside Lowe's reminds shopper to maintain social distancing. 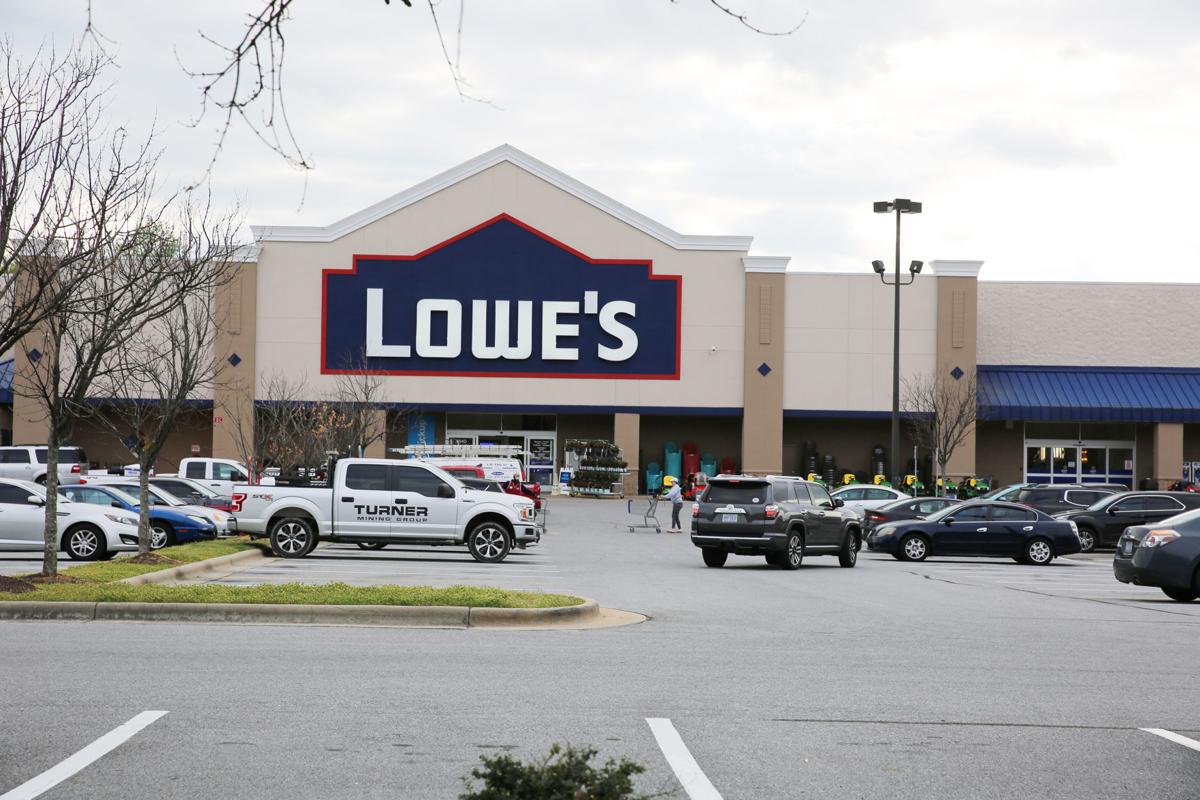 A shopper returns her cart to an attendant in the parking lot at the Lowe Home Improvement story on East 10th Street on Wednesday.

An officer from the Greenville Police Department discusses the city's "Stay at Home" order with customers at Lowe's during the weekend.

A sign on East 10th Street reminds motorists to heed COVID-19 restrictions with messages that say "Stay Home" and "Required" travel only.

Officers from the Greenville Police Department discuss the city’s Stay at Home order and social distancing with customers entering Lowe’s over the weekend.

A sing in front of Lowe’s in Greenville asks residents to stay at home unless purchasing essential items.

A sign inside Lowe's reminds shopper to maintain social distancing.

A shopper returns her cart to an attendant in the parking lot at the Lowe Home Improvement story on East 10th Street on Wednesday.

Large crowds at big box retailers have raised concerns that the public is ignoring stay-at-home orders as cases of COVID-19 increase daily and the death toll in North Carolina hit the double-digits.

The number of people crowding into Lowe's home improvement stores over the weekend prompted messages from Greenville Mayor P.J. Connelly and visits to both local stores by police to "educate" customers, officials said. A sign outside the 10th Street Lowe's on Wednesday flashed messages to motorists reminding them that to "Stay Home" and that the road was for essential travel only.

"Going to Lowe’s to pick up flowers is not essential travel and defeats the whole purpose of the Stop the Spread order," Connelly's Facebook post said. "It makes me sick to see the businesses with closed signs on their front door and then driving by Lowe’s to see a packed parking lot. Just because they are open doesn’t mean you need to go there. Be a good citizen by staying at your house.”

Connelly said in a phone interview on Wednesday that city officials don't want to enforce measures like a curfews or occupancy restrictions. He said they remain hopeful that large retail locations will voluntarily limit the number of people allowed inside, ensuring people stay six feet apart and limit gatherings.

"I think it is promising that several businesses are limiting the number of people they are allowing in their store at one time," he said.

Attempts to reach corporate officials at Lowe's on Wednesday were not successful.

Health officials said social distancing measures are important because they are the only way to slow the spread of the virus, which has killed more than 45,000 people worldwide and is projected to kill as many as 240,000 in the U.S. alone.

The Pitt County Health Department on Wednesday confirmed 29 local cases. There are 1,584 cases in the state, with 11 deaths, including a Montgomery County deputy; 204 people are hospitalized.

With Lowes’ permission, police put up posters to remind customers of the city's Stop the Spread order. The signs also were displayed other stores where there were large crowds, including convenience stores and grocery stores.

“The stay-at-home order, we’re really asking for community compliance," Greenville Police Department Chief Mark Holtzman said. "I’m asking the community not to use our police resources to have to go out and address all this. Keep your travels to the essential travels, but you’re allowed to be outside, you’re allowed to be with family members."

Officers are not pulling cars over for the order, Holtzman said. If someone is stopped for another purpose officers can educate the driver about the order, he said.

Holtzman said large numbers of people have been spotted gathering on playground equipment, but Recreation and Parks staff has handled those situations. Officers also have responded to parties.

Officers will enforce the order if the department receives repeated calls about issues that put the community at risk, he said. Violations can result in misdemeanor citations.

“So we’re kind of taking them on a case-by-case basis, being proactive at this point and trying to educate businesses of the standards that are out there,” Holtzman said.

Officers have protective gear available to them, Holtzman said. There is a limited supply of masks they can wear if they respond to a call involving a person who could be infected.

Connelly hopes that with continued education people will realize how imperative it is to not come in close contact with others.

"We worked hard over the weekend trying to educate people," he said. "Police officers were handing out flyers and met with managers at big box retailers on how they can help stop the spread. We hope they will step and take actions that will be beneficial to their employees and customers."

If no action is taken, Connelly said he "would discuss different measures with the city on how to keep everyone safe. Again, I continue to urge everyone to stay home — unless it is for essential travel."

Some stores already are limiting the number of customers. At Academy Sports on South Memorial, sales manager Jordan Batten said staff is requiring customers to adhere to the six-foot rule.

"The company feels that keeping a safe distance will benefit their employees and their customers," Batten said. "We have also decided to limit the number of people in the store to 25 at a time. We have people wait outside, and as customers exit, we allow others to come in. It is a safety precaution in the best interest of the general public."

Customers has been very cooperative, he said. "We have a dedicated team at the door with a counter so we know how many people are inside at any given time. We also have curbside service in place."

Customers can order online and pick up their supplies without entering the building at all.

Montgomery County Sheriff Chris Watkins reported on Wednesday that one of his deputies is among the state's 11 deaths from the virus. Deputy Sypraseuth "Bud" Phouangphrachanh died Tuesday night at a hospital in Pinehurst.

The 43-year-old, who was married with five children, had experienced what he thought were allergy symptoms but later tested positive and was admitted Monday to the hospital.

Phouangphrachanh served as a school resource officer and had been with the sheriff's office for 14 years in the rural county known for the Uwharrie National Forest.

It wasn't clear whether the deputy contracted the virus while on duty. The sheriff said in an email that he didn't have any information indicating when and how the deputy was exposed.

State officials also reported Wednesday that an employee at Maury Correctional Institution in Greene County has tested positive for COVID-19. The prison can hold 1,500 offenders.

The employee had been off the job since getting tested last week and self-reported the diagnosis on Monday, according to the state Division of Adult Correction and Juvenile Justice.

The worker showed no symptoms, and has had "very limited, brief interactions" with prisoners, the agency said. The employee apparently was exposed to a family member with the virus. Some Maury prisoners are under quarantine as a precaution, the department said.

Visitations already had been suspended at state prisons for more than two weeks. No state prisoner has tested positive, division spokesman John Bull said on Wednesday.

The Associated Press also contributed to this report.