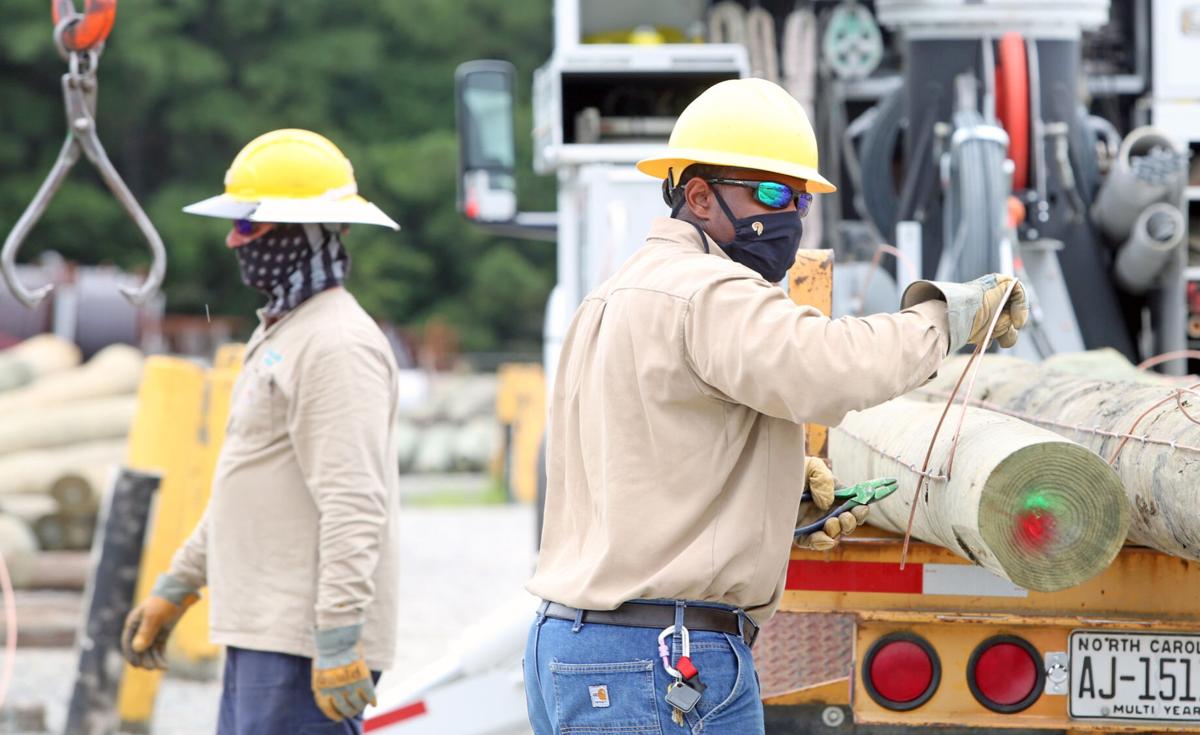 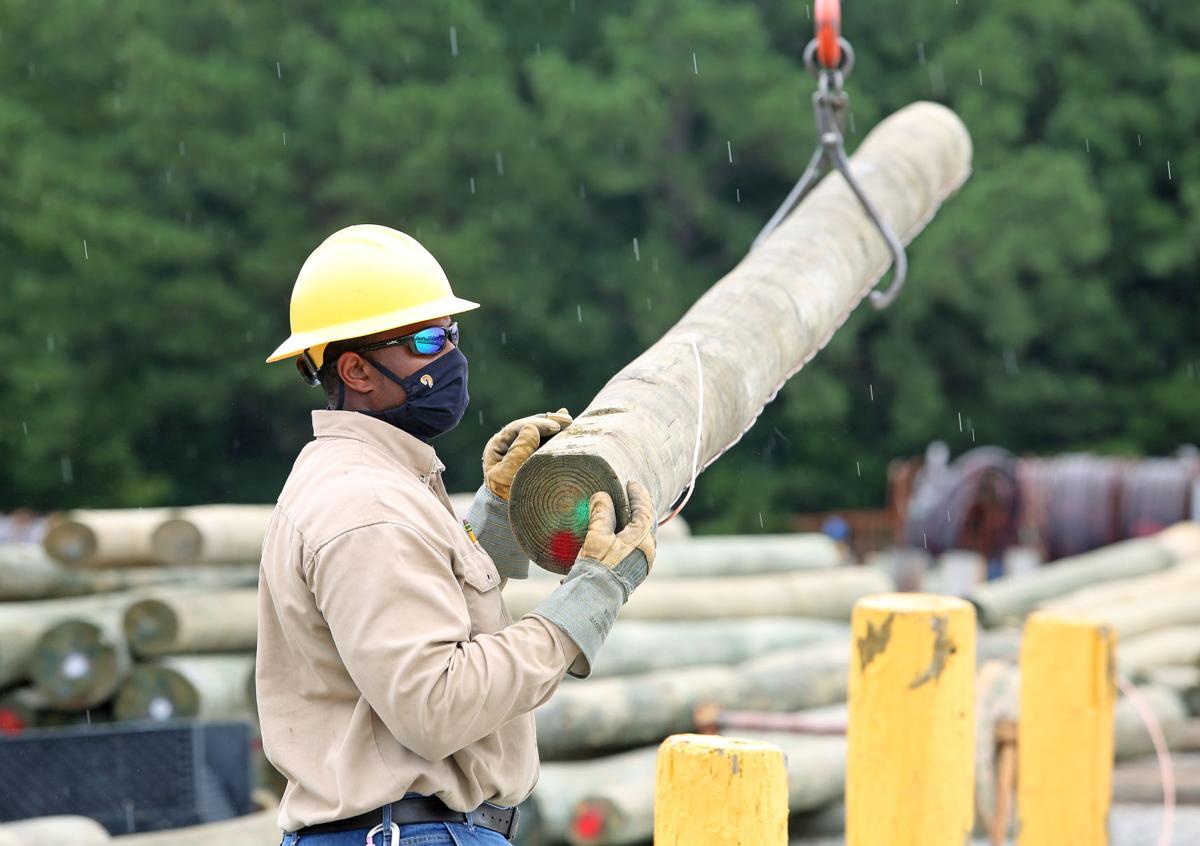 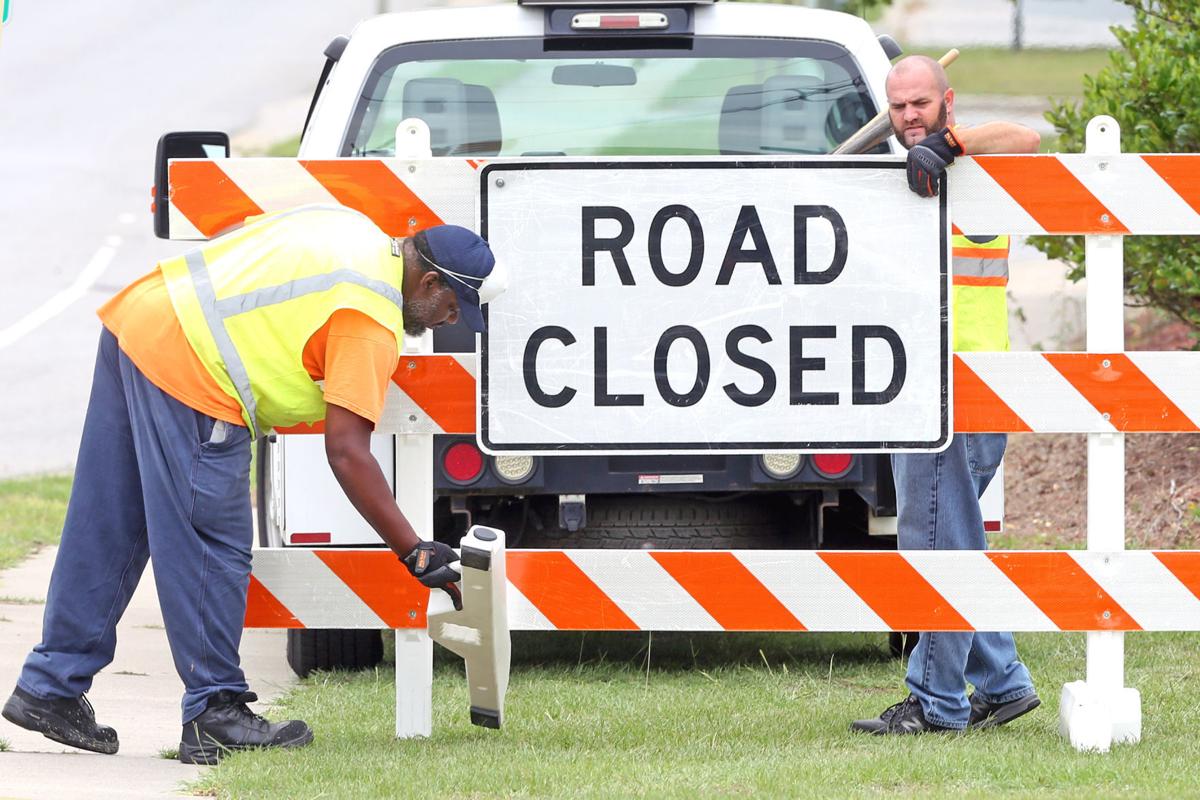 At left, Kevin Vebber and Omakus Langley, left, traffic control workers with the City of Greenville, put out signs for the night crew in case flooding occurs at 14th and Charles Boulevard. Rainfall between 4-6 inches and sustained winds of 39 mph or greater were expected when the storm hit today, the National Weather Service reported.

At left, Kevin Vebber and Omakus Langley, left, traffic control workers with the City of Greenville, put out signs for the night crew in case flooding occurs at 14th and Charles Boulevard. Rainfall between 4-6 inches and sustained winds of 39 mph or greater were expected when the storm hit today, the National Weather Service reported.

Rain and wind from Isaias was expected to diminish as the storm moves rapidly across eastern North Carolina today, but officials tell residents to remain alert for flash floods and other hazards.

The tropical storm reached hurricane strength Monday night. It was expected to make landfall between Myrtle Beach and Wilmington and cross Greenville overnight. Rainfall between 4-6 inches was possible and sustained winds of 39 mph or greater likely, the National Weather Service reported.

The storm’s center was expected to move over New Jersey by 2 p.m. today, when a local flash flood watch was set to expire. Skies were expected to clear this afternoon, but thunderstorms are possible through Friday.

State and local crews on Monday stationed barricades and signage in low-lying areas prone to flooding that can be moved into position quickly to close flooded sections of road.

Area utilities last week trimmed vegetation from power lines in an effort to minimize outages. On Monday, crews from Greenville Utilities prepared equipment and loaded utility poles onto trailers to be ready to respond to outages.

“Since the strongest winds are expected to arrive in our service area during the night, we have trucks and trailers well-stocked with supplies,” spokeswoman Emily Garner said. “Our call center and emergency operations center will be manned 24/7 throughout the event.”

In the event of power outages, she asked for patience. “Response may be slower than normal due to COVID-19 safety measures. We also request that customers remain outside of marked work zones and refrain from approaching crews.

GUC’s Storm Central webpage includes an outage map along with links and information that can help residents at guc.com/outages/storm-central.

Pitt County Emergency Management Director Randy Gentry said Monday officials decided against opening emergency shelters because the storm was not expected to be severe and because they wanted to avoid spreading coronavirus. He said assets were deployed in the event conditions changed and shelters were needed.

Other precautions in the area included a delay of GREAT Bus operations until noon today, postponement of bulk trash pickup in Greenville until Wednesday and suspension of free COVID-19 testing at multiple sites in the county. GUC also delayed the opening of drive through customer service lanes at its offices until noon.

The U.S. National Hurricane Center on Monday warned oceanside home dwellers to brace for storm surge up to 5 feet and up to 8 inches of rain in spots as Isaias moved up the coast, the Associated Press reported.

Isaias (pronounced ees-ah-EE-ahs) killed two people in the Caribbean and roughed up the Bahamas but remained at sea as it brushed past Florida over the weekend, providing some welcome relief to emergency managers who had to accommodate mask-wearing evacuees in storm shelters. The center of Isaias remained well offshore as it passed Georgia’s coast on Monday.

Authorities in Myrtle Beach ordered swimmers out of the water to avoid rough surf and strong rip currents. Still, many people were out enjoying the beach and walking their dogs under overcast skies.

“They don’t really scare me,” Heffner said, “but I have great respect for them.”

North Carolina Gov. Roy Cooper warned residents on Monday that the storm could be dangerous regardless of its strength.

“Whether it’s labeled a tropical storm or a hurricane, you should take this storm seriously, and make sure your family is ready,” Cooper said.

Ferry operators wrapped up evacuations from Ocracoke Island on Monday, moving more than 3,500 people and 1,700 vehicles off the island over four days. Officials were taking no chances after taking a beating less than a year ago from Hurricane Dorian. Evacuation orders also were issued for Hatteras Island north of Okracoke.

Since forming last week, the storm has been buffeted by competing forces both trying to kill and strengthen it, said University of Miami hurricane researcher Brian McNoldy.

“Of all the places it could be, it found the warmest water it could,” which fuels storm development, McNoldy said. “And yet it is struggling.”

That’s because dry air kept working its way into the storm at low and mid-levels, which chokes storms.

Isaias was blamed for two deaths in the Dominican Republic and Puerto Rico, where it uprooted trees, destroyed crops and homes and caused widespread flooding and small landslides.

The storm snapped trees and knocked out power Saturday in the Bahamas. Shelters were opened on Abaco island to help people still living in temporary structures since Dorian devastated the area, killing at least 70 people in September 2019.