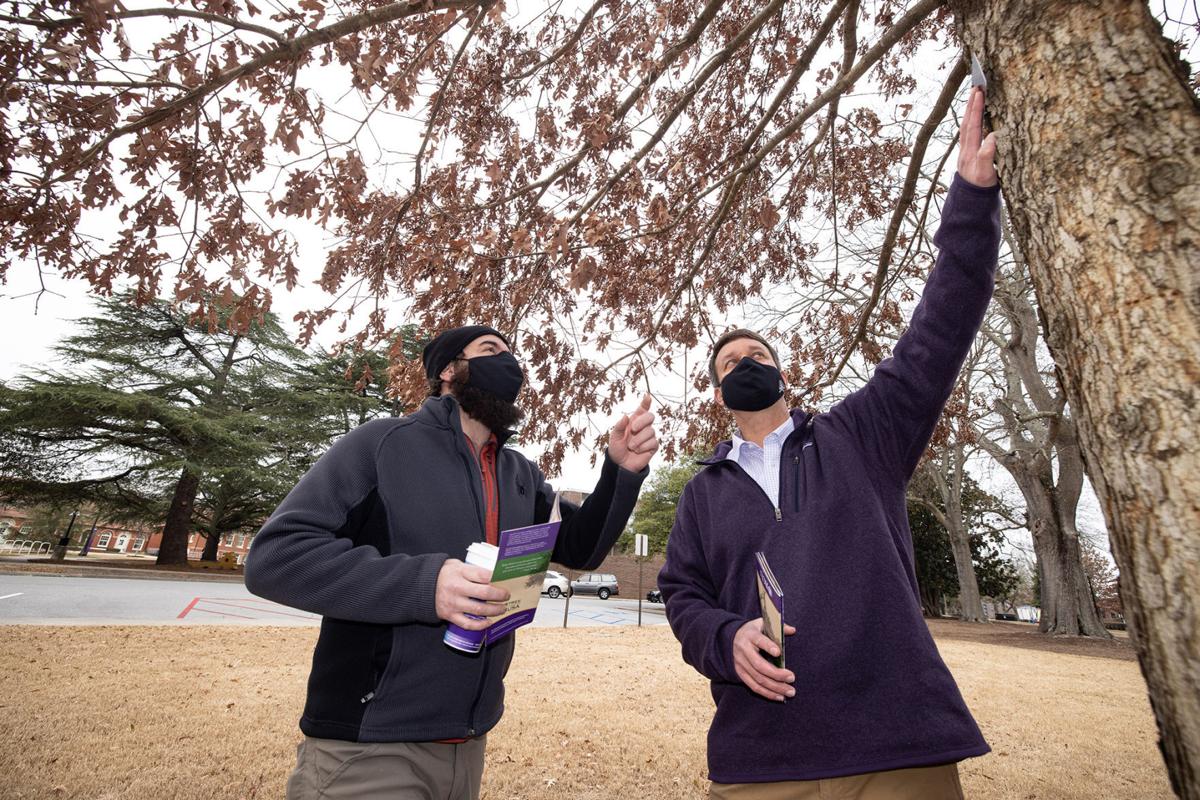 Chad Carwein, left, and John Gill talk about the second tree on the ECU Tree Trail, a white oak. 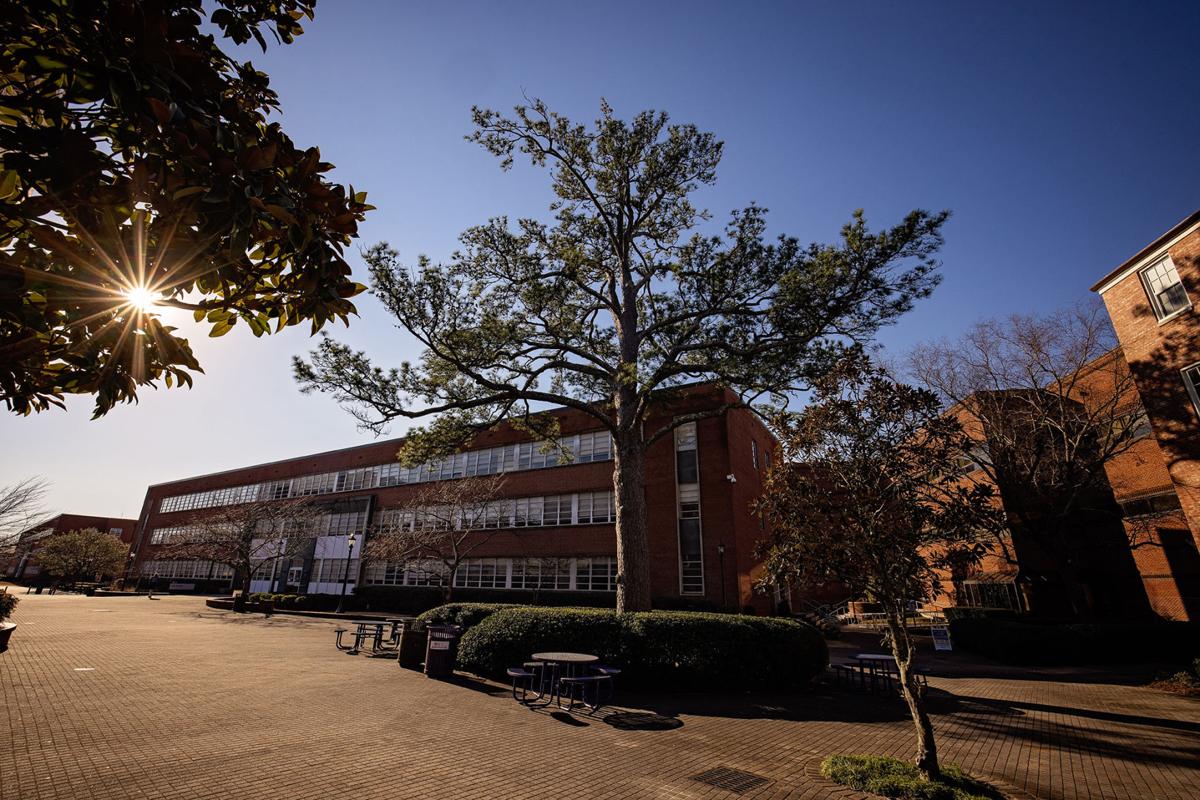 This loblolly pine stands in Wright Plaza. One of the oldest trees on campus, it appears in some of the earliest photos and drawings of ECU.

Chad Carwein, left, and John Gill talk about the second tree on the ECU Tree Trail, a white oak.

This loblolly pine stands in Wright Plaza. One of the oldest trees on campus, it appears in some of the earliest photos and drawings of ECU.

Between the Wright and Graham buildings, protected by a ring of holly bushes, stands an overlooked landmark older than any building on East Carolina University’s campus.

“Any picture that I’ve seen of the university dating all the way back to the turn of the century, that tree was in it,” says John Gill, grounds director. “We have a hedge around it to protect it, so you really don’t get how big it is until you actually walk in there and stand next to it.”

The loblolly pine, a personal favorite of Gill’s, is a highlight of the ECU Tree Trail, a mile-and-a-half circular route through campus featuring 45 species of trees.

The trees are identified with sequentially numbered plaques, and botanical information is provided in a printed brochure or through an interactive app.

These resources are the culmination of years of effort by a diverse group of faculty, staff, students and alumni, Gill says. Key figures include biology professors Claudia Jolls and Carol Goodwillie, former ECU arborist Gene Stano, sustainability manager Chad Carwein and alumnus Mike Bunting, among others. Graduate student Ashley Dow was instrumental in developing the interactive aspect of the trail, Gill says.

Bunting, an alumnus from Greensboro who passed away in August 2020, was known for attending every home football game for more than 50 years. He established a number of scholarships at ECU and wanted to do something on campus that would combine his love of ECU and of plants and landscaping.

With Bunting’s support and a visit to Elon University’s tree trail for inspiration, the team began to inventory trees, record GPS locations and put together the descriptions, brochure and app.

The trail begins with an American holly in front of the Leo W. Jenkins Fine Arts Center and passes a majestic southern magnolia on its way toward Wright Plaza and the foot of College Hill, then leads back through the mall and the Student Memorial Garden. From flowering landscaping trees such as crape myrtle and cherry to stately shade trees such as oaks and elms, the trees add color and interest to the campus throughout the year with springtime blooms and brilliant fall foliage.

Initiatives like the tree trail and the arboretum in front of Jenkins, along with a concerted effort to care for existing trees and to replace any trees lost to disease, age or construction have helped earn ECU the Tree Campus USA designation for five years running. Carwein says a key part of the designation is student service-learning, and students have played an important role in studying and cataloging the trees on campus.

Established on 43 acres as East Carolina Teachers Training School in 1907, ECU’s campus has since grown to almost 1,600 acres. Through those years the university has fostered a commitment to environmental stewardship by protecting and preserving the valuable natural resources on campus.

ECU will work with seven other universities and colleges as part of a $2 million initiative to boost cybersecurity education and research in North Carolina.

Issued by the National Security Agency on behalf of the U.S. Department of Defense, the grant is called the North Carolina Partnership for Cybersecurity Excellence (NC-PaCE) initiative.

“To keep up with the growing demand for sophisticated defense against cyberattacks, the NC-PaCE project aims to provide advanced artificial intelligence-based cybersecurity research, targeted curriculum development, skills development and work-based learning for industry employees and university graduates in North Carolina and beyond,” said Dr. Kamran Sartipi, assistant professor in ECU’s Department of Computer Science and a member of the research team. “The overarching goal of this initiative is to develop and implement a cybersecurity strategy for the commercial industrial sector, state government agencies and the defense industrial base in North Carolina, and to establish North Carolina as a national leader in cybersecurity.”

The grant is for two years with an optional third year. Dr. Laurie Williams of N.C. State is the principal investigator on the grant. Along with ECU, other institutions involved include N.C. A&T, UNC-Charlotte, and UNC-Wilmington, along with Pitt, Forsyth Technical and Wake Technical community colleges.

Hackers attacked the Colonial Pipeline in May, resulting in gas shortages in North Carolina and throughout much of the East Coast. More recently during the Fourth of July holiday, hackers infiltrated the technology firm Kaseya, affecting some of the company’s business clients throughout the world with a ransomware attack.

Sartipi, who has been at ECU since 2016, said the grant is important for the university.

“This initiative provides several opportunities for ECU researchers and educators in cybersecurity to closely collaborate with a wide range of expertise and centers to develop large and multi-institutional grant proposals, co-supervise Ph.D. students and participate in research centers in cybersecurity,” he said.

Sartipi, who teaches computer science and software engineering courses, said two ECU graduate students and two ECU undergraduate students would be involved in the work that would include research and development toward a data intelligence as a service (DIaaS) online lab for hands-on training for industry and academia.

The College of Engineering and Technology’s new Center for Smart Manufacturing will allow for hands-on cybersecurity education that will focus on data generation and communications. The center will provide simulated manufacturing environments for students as well as for regional industries. Through the use of cloud-based and artificial intelligence-powered services, students will be trained on aspects of network security and anomalous behavior detection. Students will be involved in developing a virtual cybersecurity training center, while faculty members will be able to perform research on new approaches to cybersecurity.