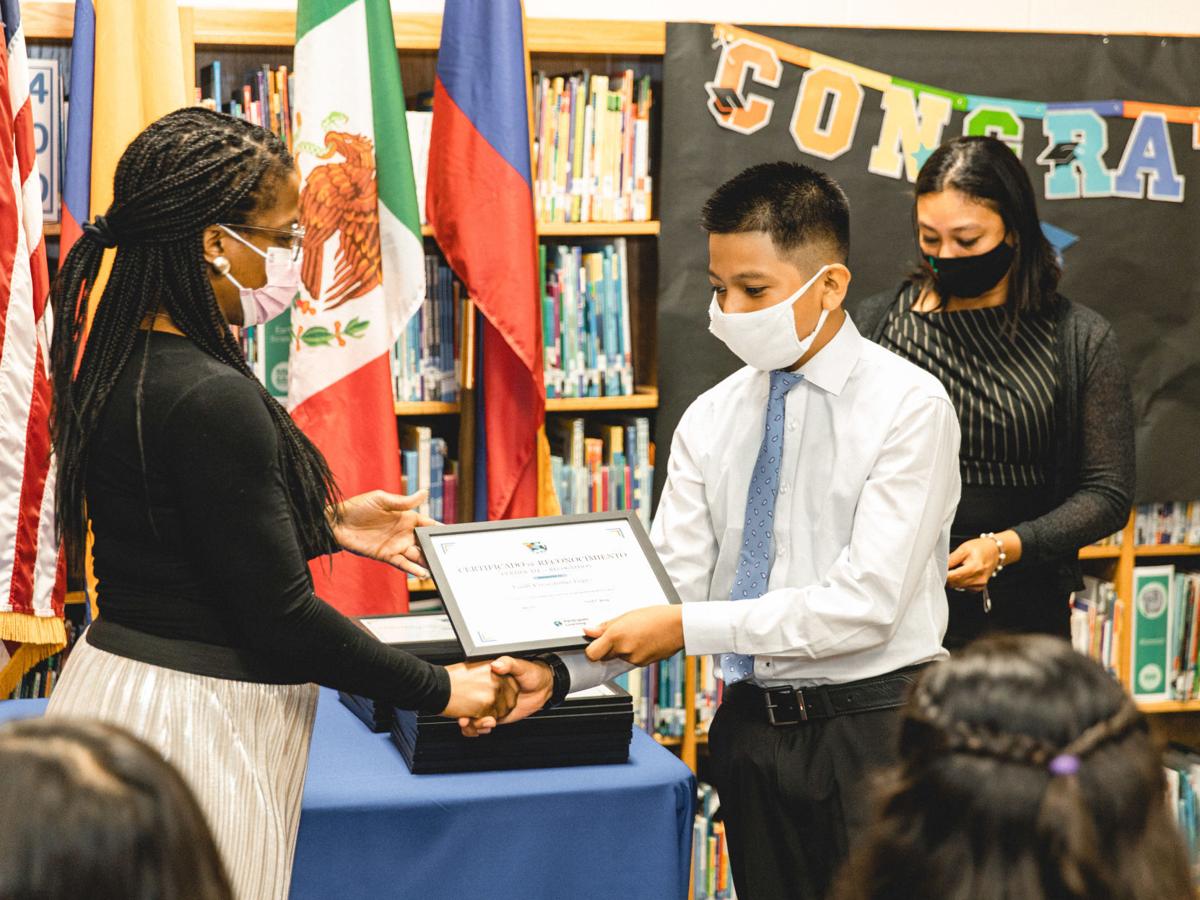 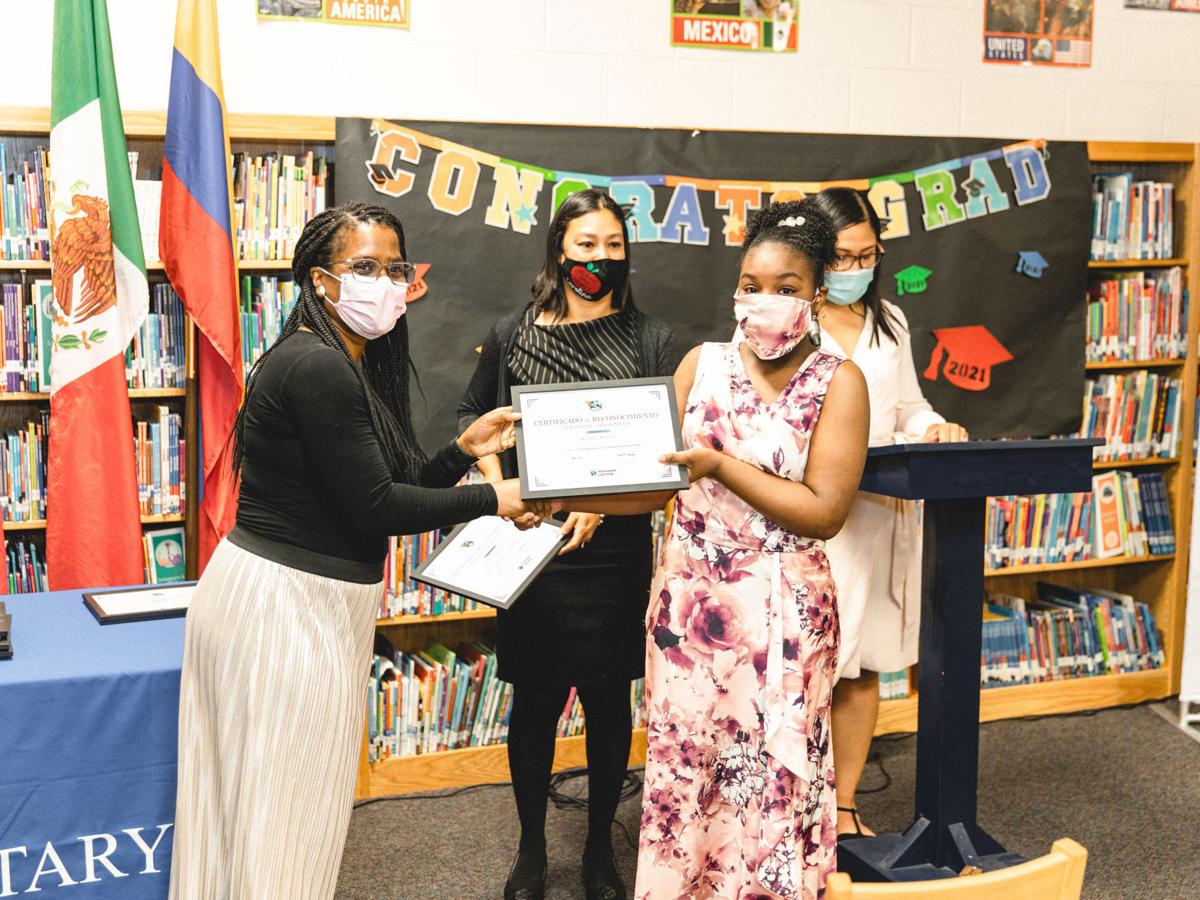 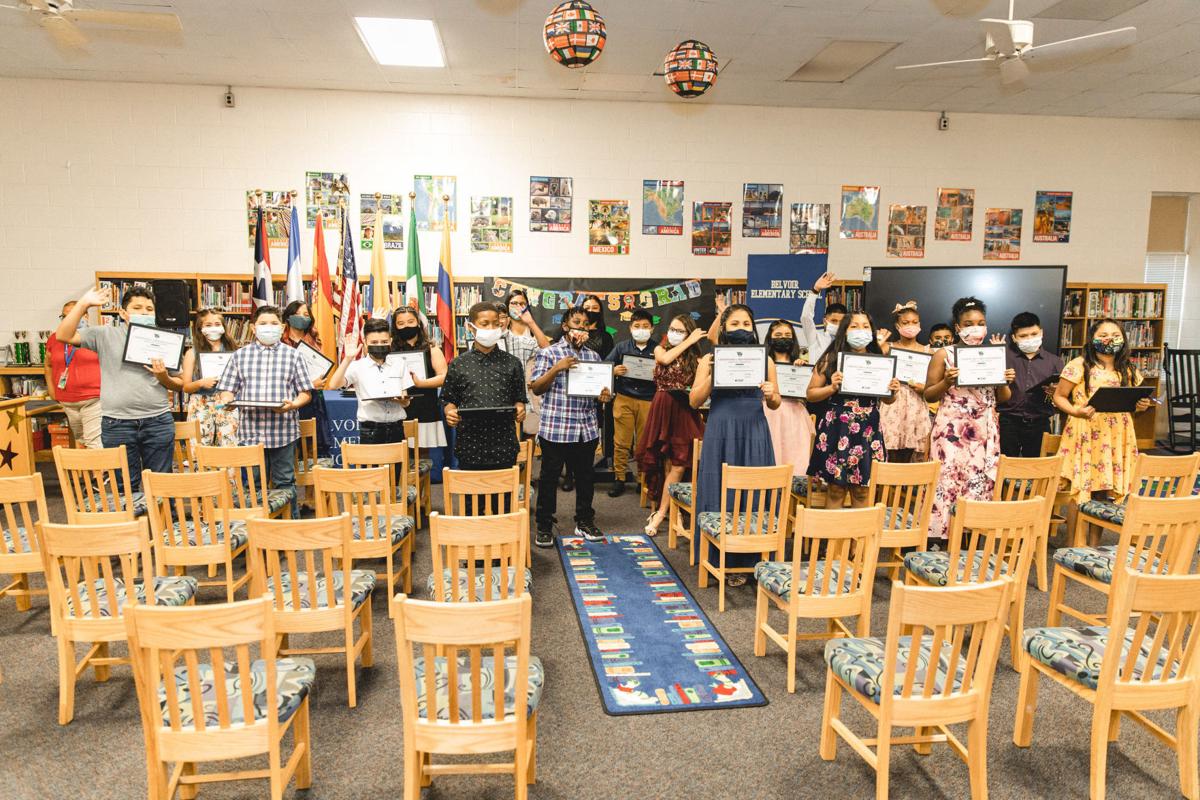 Belvoir fifth-grade graduates wave to their parents, who are watching the ceremony on Zoom on Thursday. The students have spent six years in the school’s dual language program.

Belvoir fifth-grade graduates wave to their parents, who are watching the ceremony on Zoom on Thursday. The students have spent six years in the school’s dual language program.

There were some tears in 2015 when 48 students in Belvoir Elementary School’s inaugural dual language class experienced their first day of kindergarten, and there were tears Thursday when nearly 30 fifth-grade graduates became the first to complete the program.

But other than that one common element, those two days were worlds apart.

After six years as a part of Dos Mundos, (Spanish for two worlds), students who began elementary school knowing either English or Spanish are heading to middle school having been taught both.

“The ultimate goal is for students by the end of fifth grade to be bilingual and bi-literate, so not only able to speak the language but able to read and write,” said Courtney Dubis, who served as instructional coach at Belvoir when the school became the first in northeastern North Carolina to offer a dual language program. “To see when they come in knowing absolutely nothing and where they leave, it’s truly amazing.”

Dos Mundos is among a growing number of dual language programs across the country, where thousands of public and private schools offer instruction not only in Spanish but in a host of other languages including Chinese, Japanese, French, German and Greek.

According to the North Carolina Department of Public Instruction, programs began in the state in 1990 and are now offered in 47 school districts. In Pitt County, the dual language program is being expanded next year to include two additional schools. Belvoir’s graduates will have a chance to continue aspects of the program at Wellcome Middle, and Pactolus will welcome its first dual language kindergarten class.

“Kindergarten is the perfect time to start because they’re very resilient,” said Dubis, who now serves as instructional coach and global coordinator at Pactolus. “A lot of times we spend more time consoling the parents than we do the children.”

Pactolus Principal Taylor Matkins said the school, where about 40 percent of the student population is Latin American, has been working to develop a dual language program for two years. But the planned 2020-21 launch was delayed due to COVID-19.

Instead, Pactolus hopes by August to bring 48 kindergartners into the program, where two groups of learners will receive all their academic instruction in English one day and in Spanish the next.

“It’s full immersion,” Matkins said of the program, which will be similar to the one at Belvoir. “They are fully immersed as far as posters in the room to labels in the room to the teachers talking in the room.”

Belvoir Principal Deirdre Ingram said her school, where about 55 percent of the student population is Hispanic, has seen numerous benefits from Dos Mundos. More than 200 of Belvoir’s 388 students are dual language learners.

Such evidence helped persuade Molly Holdeman, whose family lives in the Falkland Elementary district, to apply to have her youngest daughter, Clara, attend Belvoir.

“We just see the importance of being bilingual, how it opens the world to you,” she said, adding that her husband, Michael, and several relatives on both sides of the family speak both English and Spanish. “It’s just an incredible benefit to education.”

In addition to providing a marketable job skill, Holdeman said fluency in a second language has been associated with reduced dementia in older adults. But none of that seemed to matter to Clara on her second day of kindergarten last year when she spent the day receiving all her instruction in Spanish.

“She got in the car and I said, ‘Clara, how was your first day of Spanish?’” Holdeman recalled. “She took her thumb and flipped it upside down and then in her little kindergarten voice said, ‘I couldn’t understand anything those ladies were saying to me.’

“It is tiring for her to be in the Spanish classroom because she has to listen harder and process more,” she said. “But after two or three weeks, it just became a normal day.”

At the end of her first-grade year, Clara is reading above grade level in both English and Spanish.

Ingram, who served as assistant principal for three years at Belvoir before becoming principal this school year, said it is not uncommon for younger students to feel overwhelmed by their first exposure to the immersion model, in which all subject areas are taught in English or Spanish on alternating days, with no repetition.

“They are confused, and they’re trying to figure out ‘Why did my mama send me to this foreign place?’” Ingram said. “There are some tears. We tell parents to give them until November or December and you will be amazed at what they can do.

“What we’ve tried to tell the parent is they’re learning two languages at the same time,” she said. “They will not become fluent in kindergarten.”

When subjects including reading, math, science and social studies are taught in Spanish, the teachers are all native speakers. Ingram said that Belvoir’s Spanish-speaking teachers, hired through Participate Learning, come from countries including Spain, Honduras, Columbia and Ecuador to spend five years teaching in the United States.

Belvoir third-grade teacher Lisa Almonte is from the Dominican Republic, where she spoke Spanish at home as a child but learned English in school.

“They (Belvoir dual language students) get to experience my experience as a child,” she said in a video shown at Thursday’s graduation.

Almonte said that because students have attended classes together since kindergarten, they have become like a family.

“They love each other,” she said. “They protect each other.”

Speaking in both English and Spanish by video, student Kimiya Sutton said she values those relationships.

“I would describe it as amazing,” she said of the program. “I got new friends, and I got to speak a different language other than English.”

Belvoir’s dual language students will have at least one class together next year as sixth-graders at Wellcome Middle School, where a teacher from Honduras will offer science instruction in Spanish.

Wellcome Principal Dannie Foster said the school plans to expand over the next two years to offer one dual language teacher at each grade level.

Foster, who studied Spanish in high school, knows some words but does does not consider herself to be fluent in the language.

“These students, I think it’s become ingrained,” she said. “They have been raised through school on this. It’s second nature to them at this point to switch languages.”

Although Foster saw dual language programs at the elementary level when she worked in Duplin County, she is curious to see how expanding the program to middle school will affect the culture at Wellcome.

“Sometimes, you can see different cultures get compartmentalized or segregate themselves within a school,” she said. “I think that (dual language) is going to bring a tighter community within our school and a different feel to how we work together, live together, grow together. What a great time for this to be happening when we’re coming back together out of a pandemic and having to rebuild community in school.”

Because schools are continuing to restrict visitors due to COVID-19, Belvoir parents joined Thursday’s graduation ceremony via Zoom, applauding when their students stepped forward to receive their certificates of recognition.

Ingram is proud of what her students have achieved.

“This graduation represents a sense of accomplishing something that has never happened before in Pitt County,” she said. “Our students are reading, they’re writing and they’re speaking in Spanish and English. It’s incredible.”