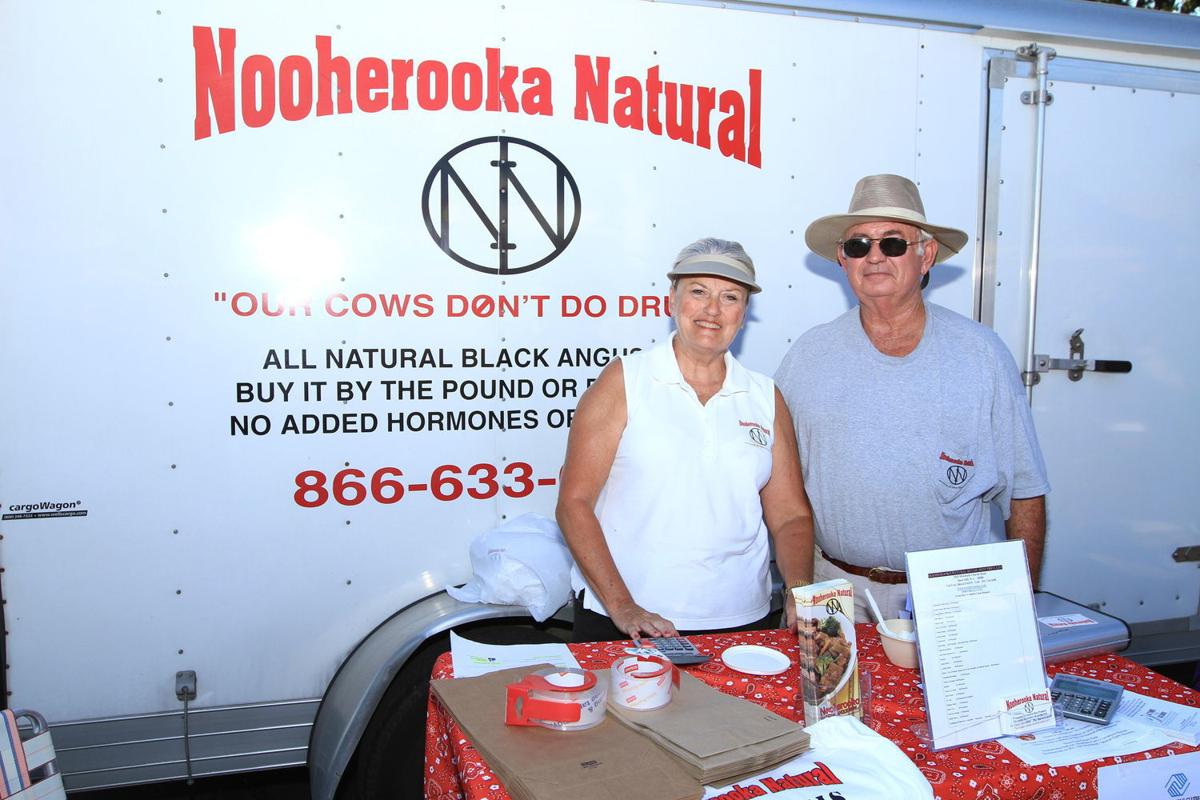 Mary Betty and Ossie Kearney of Nooherooka Natural at the Uptown Umbrella Market in downtown Greenville several years ago. 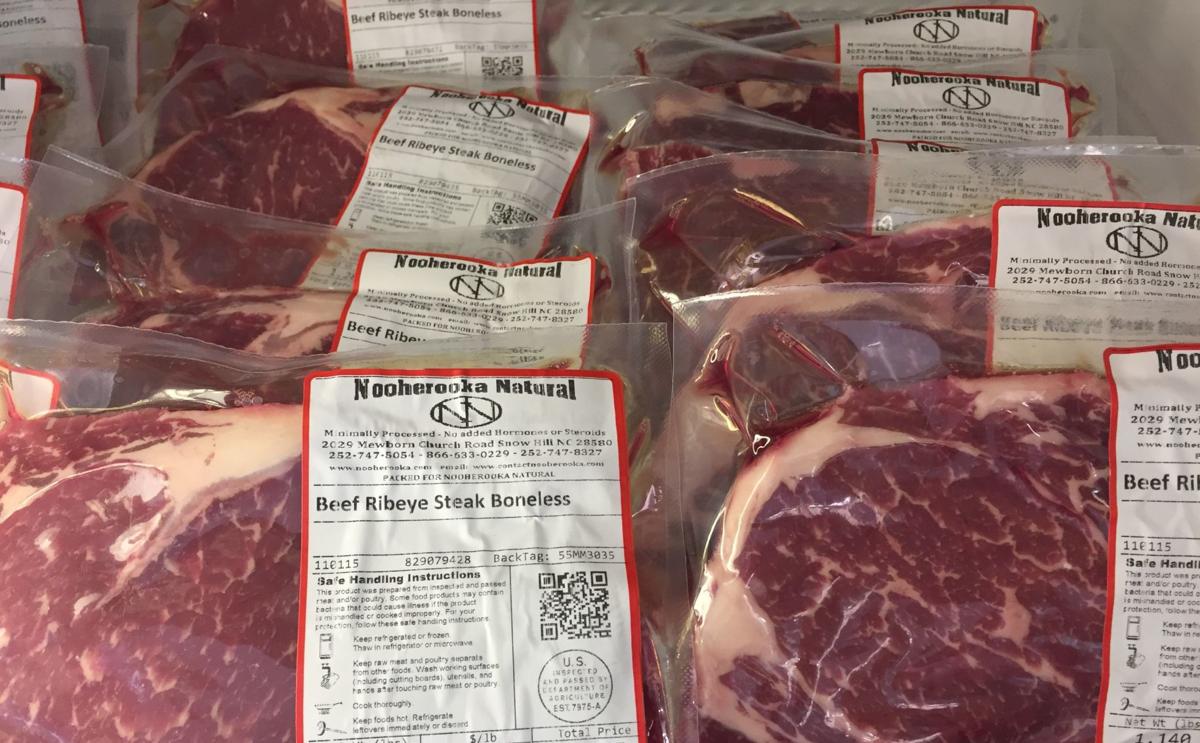 Mary Betty and Ossie Kearney of Nooherooka Natural at the Uptown Umbrella Market in downtown Greenville several years ago.

Disruptions due to COVID-19 outbreaks at large meatpacking facilities is increasing demand for smaller outfits in eastern North Carolina, but local suppliers say they are limited by production capacity, storage and the time it takes to their raise animals.

Consumers started worrying about the meat they normally purchase from supermarkets as the pandemic spread. Beginning in April, traditional meat producers were faced with euthanizing millions of pigs and chickens because of outbreaks among processing plant workers. While President Trump signed an order under the Defense Production Act that kept processors open, staffing remains down because employees are out sick.

There also are safety worries because of reports that some sick workers are still on the job. The concerns have increased business for suppliers like Nooherooka Natural, a family owned and operated farm in Green County that raises and sells beef and heritages pigs.

“We have new customers and our older customers are buying much more than they did before,” owner Mary Betty Kearney said. The farm raises the animals and works with Piedmont Custom Meats to process the meat. Nooherooka markets and sells the meets at its location, online and at farmers markets.

“We’ve been in business 18 years. We’ve renewed a lot of people who purchased from us erratically years ago or who moved. It’s only recently that we’ve gotten new customers,” Kearny said. Along with concerns about the supermarket meat supply, Kearny attributes the uptick in business to the farm’s increasing social media presence which includes posting recipes.

“What we try to offer is a pack like the family pack because the meat goes a lot further and feeds a lot more,” she said. “You learn to prepare different ways, the different cuts of meat.

“People were not buying the high end as much as the staples, like ground beef,” she said.

People don’t have to hord meat or make dietary changes, but they will see a difference in supermarket meat case in the coming months, said Andy Burlingham, Pitt County Cooperative Extension livestock and agricultural agent.

“What’s going to happen is the selection of some cuts may become limited. Meat is always going to be in the case,” he said. “You may not be able to find a pack of four T-bone steaks every time you go, but there will be a selection of some sort there.”

Ground meat and sausages should remain plentiful, he said, but people can expect spotty shortages of bacon and certain cuts of pork chops and steak.

North Carolina producers haven’t had to euthanize animals, Burlingham said, but they are keeping fewer sows for breeding to reduce the number of piglets born.

On the poultry side, producers aren’t hatching as many chicks and are going longer periods of time before bringing in new flocks to raise.

“They’ve moved some birds around but I haven’t heard of anybody having to euthanize whole flocks of birds for that purpose in North Carolina. They might just have a little bit extra road time before reaching the processing plant,” Burlingham said.

Local processors tell Burlingham they are heavily booked and someone wanting to process an animal would have a three-week wait period, if not longer.

Because so many animals are coming in, processors are taking extra precautions to prevent transmission of the novel coronavirus among employees, he said. Fewer people are working on the line so distancing guidelines can be maintained, which slows down the process.

“It really comes down to freezer space to hang the carcasses in and store the meat when it’s been cut,” he said. “That is what takes the most space.”

Once an animal is killed, everistrated and cleaned they are chilled at least 24 hours before being processed into different cuts. Most smaller facilities handle anywhere from between 20 animals to several hundred a day, not the thousands that larger producers store, Burlingham said.

Nooherooka Natural typically sends two to three cows to Piedmont Custom Meats each month for processing. Because they have a yearly contract with the company, they are able to occasionally slip in an extra cow, such as she was planning to do earlier this month when four households shared the purchase of a cow for processing.

Kearny said when the farm received its April beef shipment it sold out in a week. When she spoke Mother’s Day weekend, Nooherooka had been without beef for 2½ weeks although they had plenty of pork products and poultry products they got from Brittany Ridge Farms in Hookerton.

She also had 40 people who had put in orders for the three cows the farm planned to process in May.

Kearny said because her family can’t simply increase the number of animals they send to the processor. It takes two years to raise an animal before it’s ready to be processed because the farm doesn’t use hormones or other growth stimulants.

There is always a calculation about how many calves to raise because it’s unclear what the market will be in those two years, she said.

Burlingham said while some consumers will shift their shopping to small meat producers, it’s unlikely the COVID-19 pandemic will generate wholesale changes.

“The volume of animal protein we eat in the United States, there is no way we can build enough small processing plants to take over a large portion of that total tons of meat that go through these plants everyday,” he said. “We as the American consumer are very used to a very inexpensive and very consistent meat product coming through the growing store. If you start moving to smaller plants you are going to lose both the price you pay and there will be most inconsistency in the product as well.”

“There’s already been an increase in automation in commercial plants. What you are going to see is ever greater automation in those facilities so they will need fewer people and there will be more space between people,” he said.