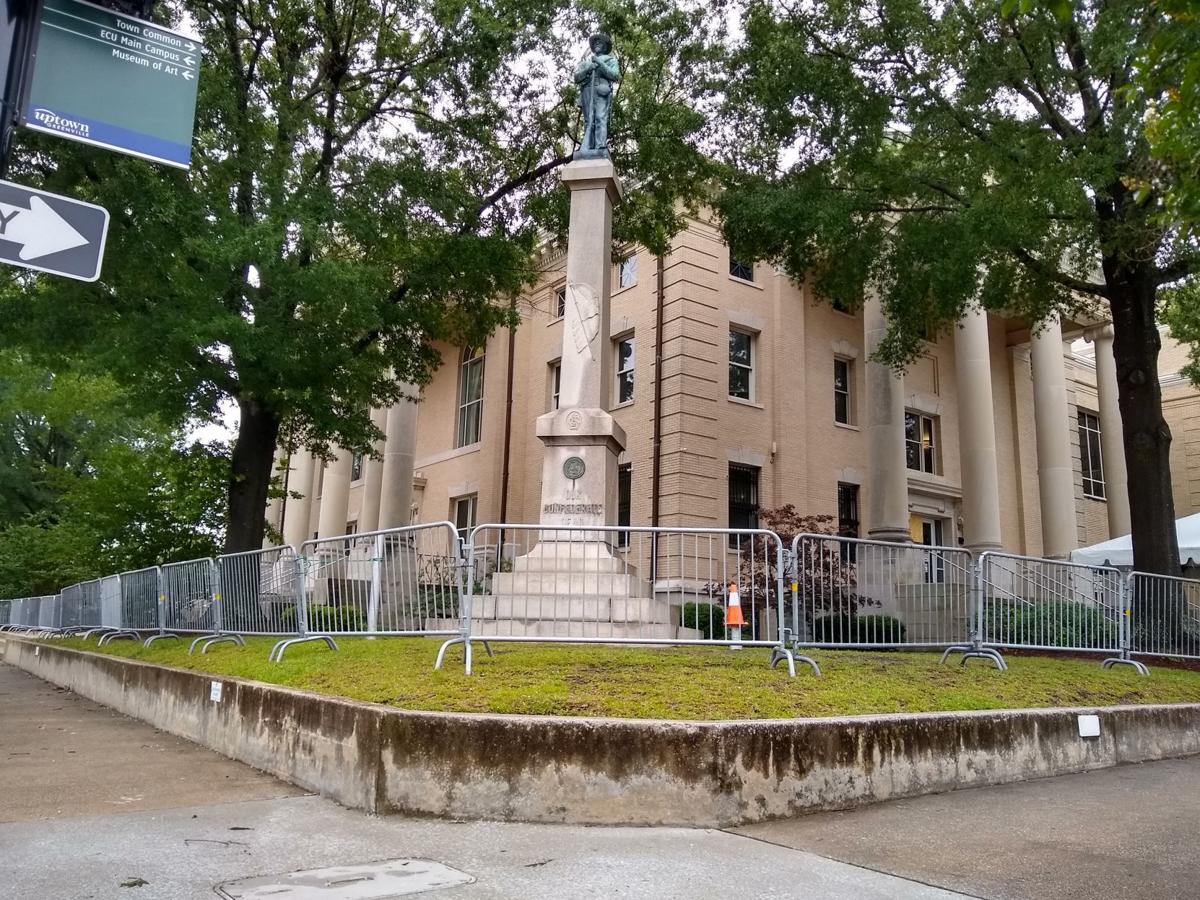 The Pitt County Board of Commissioners on Monday voted 7-2 to immediately remove the statue memorializing Pitt County’s Confederate dead, shown here on Tuesday at the courthouse grounds. 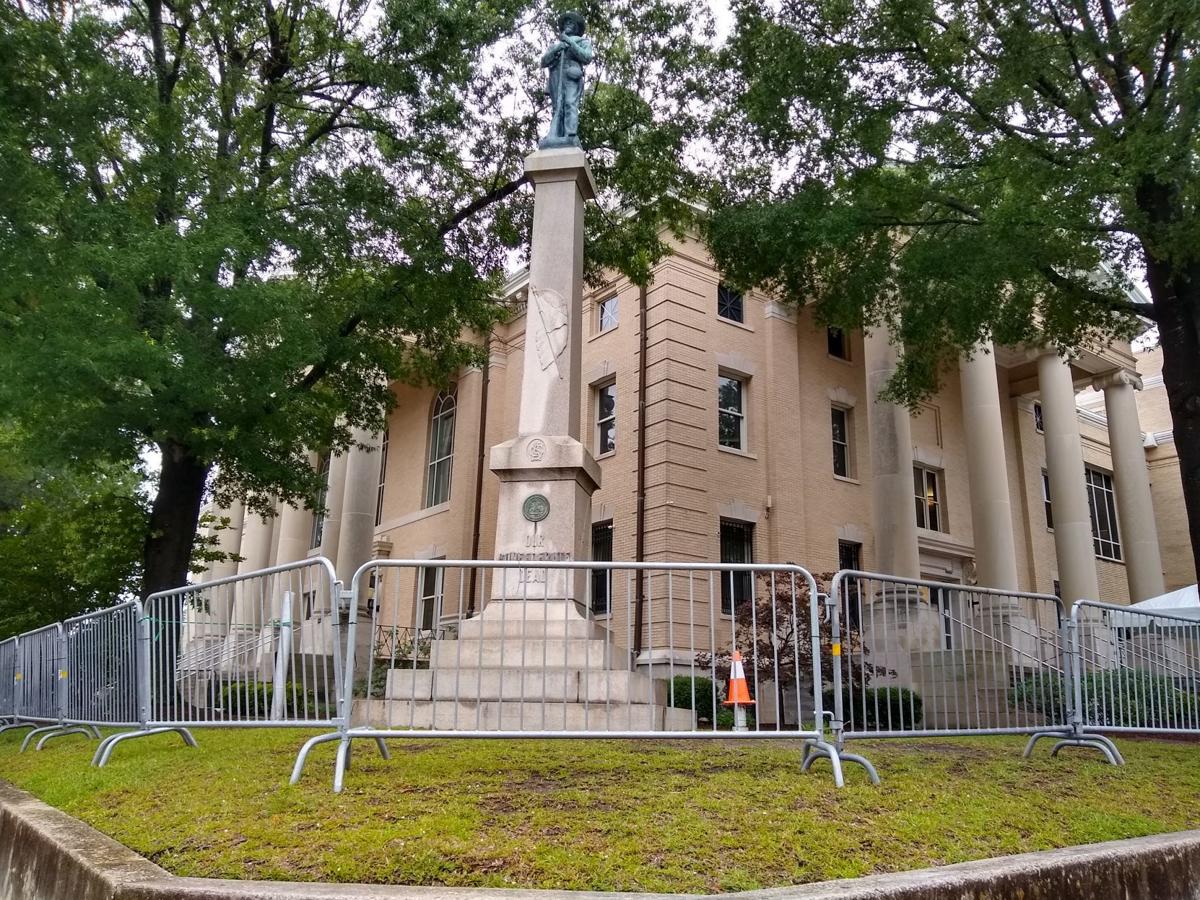 The Pitt County Board of Commissioners on Monday voted 7-2 to immediately remove the statue memorializing Pitt County's Confederate dead, shown here on Tuesday at the courthouse grounds. A fence was erected after demonstrators damaged the area May 31. A county spokesman said the move will take place when weather permits. 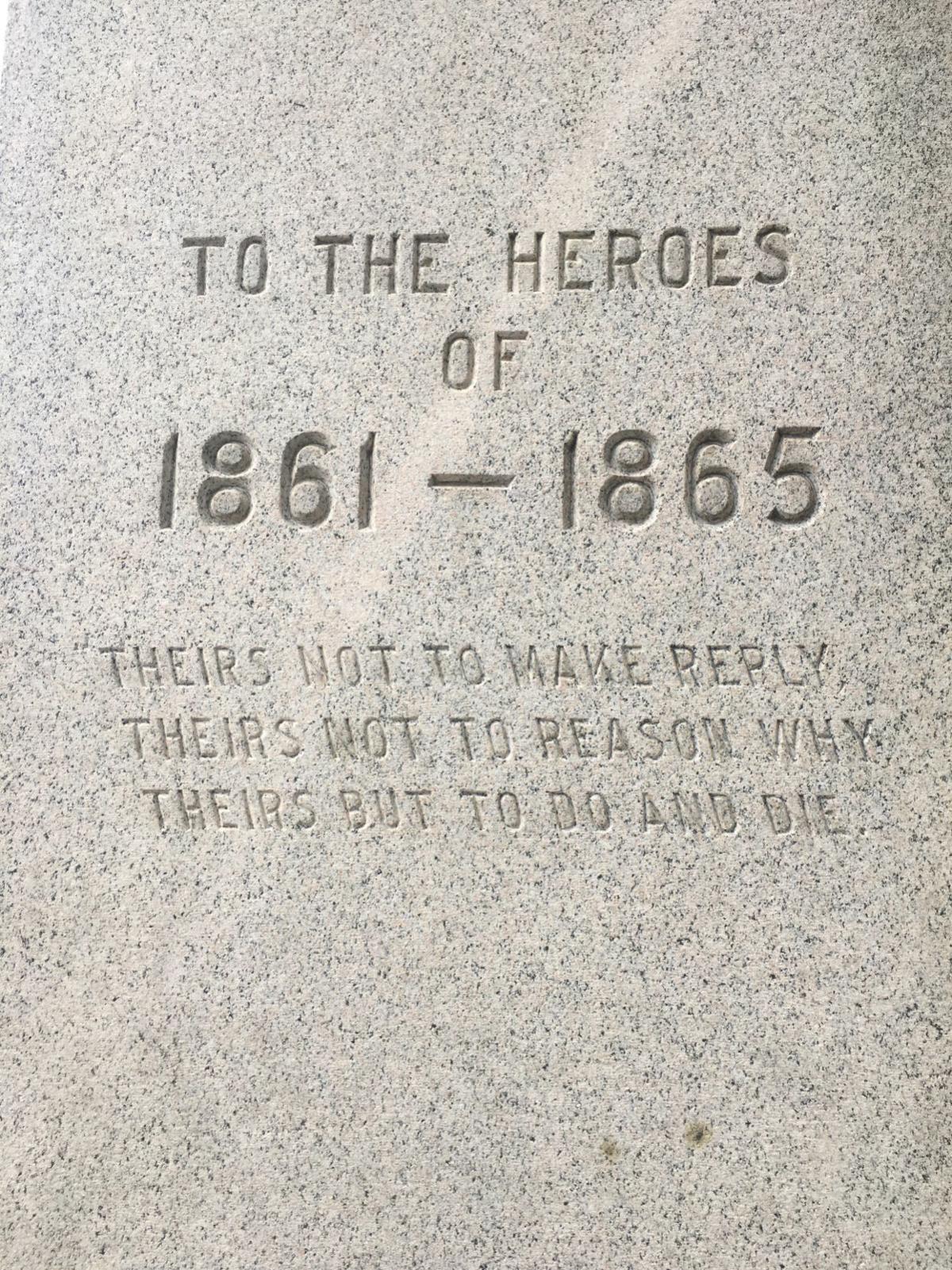 {span}The obelisk that holds a statue of a Confederate soldier at the Pitt County Courthouse includes an inscription to those who served during the Civil War.{/span}

The Pitt County Board of Commissioners on Monday voted 7-2 to immediately remove the statue memorializing Pitt County’s Confederate dead, shown here on Tuesday at the courthouse grounds.

The Pitt County Board of Commissioners on Monday voted 7-2 to immediately remove the statue memorializing Pitt County's Confederate dead, shown here on Tuesday at the courthouse grounds. A fence was erected after demonstrators damaged the area May 31. A county spokesman said the move will take place when weather permits.

{span}The obelisk that holds a statue of a Confederate soldier at the Pitt County Courthouse includes an inscription to those who served during the Civil War.{/span}

Pitt County’s Confederate memorial is coming down following a 7-2 vote Monday by the Board of Commissioners to remove it immediately from the courthouse grounds.

It’s unclear when the move will take place because it will dependent on good weather and other factors such as availability of a crane and crew, county spokesman Michael Emory said.

Commissioner Lauren White, who along with Tom Coulson voted no, said the statue needed to be moved but the board should first identify a new location and made a motion to take that action.

White said a state law allows statues to be stored 90 days. The county will have to pay twice to move the statue if it goes into storage, she said.

Commissioner Christopher Nunnally said White’s motion was an effort to delay action and urged the board to vote for immediate removal.

When asked later how quickly the statue should be removed, Nunnally said he would defer to County Manager Scott Elliott and County Engineer Tim Corley.

Corley said the height and weight of the statue will require the use of a large crane that might have difficulties navigating downtown streets.

Corley said it was “challenging” to talk with companies about moving the statue.

Two companies from Pitt County and a third from the Triangle submitted bids ranging between $25,500 and $325,000. Corley did not identify the companies that submitted the estimates.

He said most companies, including the one that provided the low estimate, added a 20 percent surcharge to do the work immediately.

Corley said the heaviest piece of the statue weighs 2,500 pounds.

Seventeen people spoke remotely about the statue’s removal during the board’s public comments period. The speakers were almost evenly divided in arguing for and against removal.

“I think it’s kind of silly to remove a statue based on a situation that happened in Minnesota,” said Greg Rock, referencing protests that occurred following the death of George Floyd during an arrest by police in Minneapolis, Minnesota. A few other speakers also referenced the removal request stemming from Floyd’s death, even though commissioners have weighed similar requests as recently as 2017.

Donna Riddick was the first speaker, recounting how she and her children moved from a small town to Greenville five years ago.

“Greenville and Pitt County represent hope, represent change for the better and they represent freedom and opportunity for people from small towns. It offers you a chance to reach your potential.” Riddick said. “But when I see the statue of the Confederate soldier at our courthouse, I see an oxymoron, a conflicting message. How can this place represent hope and change and freedom for everyone in Pitt County and brandish such a reminder of anguish despair, murder and shame for almost 40 percent of the people it serves?”

How can a reminder of such a dark time be allowed to stand in front of the place that symbolizes justice, Riddick said.

East Carolina University professor Gerald Prokopowicz, who has published multiple books about the Civil War, including 2008’s “Did Lincoln Own Slaves? and Other Frequently Asked Questions About Abraham Lincoln,” refuted often cited reasons for retaining statues.

The courthouse statue doesn’t accurately represent Pitt County’s role in the Civil War because it honors only Confederate soldiers, not the hundreds of men that served in the U.S. Colored Troops or the 1st and 2nd North Carolina Union volunteers, Prokopowicz said.

Prokopowicz said people will argue that “what’s done is done.”

“Racism is never found in a monument or statue, it stems from the heart and mind,” said Jerry McRoy, who argued the statue should remain at the courthouse.

“If you take northern people from North Carolina and send them home, the racism would be gone,” said James Butler, arguing the statue represents all Civil War veterans, black and white.

Marcus Karachun said moving the statue is rewriting history “so America will no longer be free.”

He said lawsuits will be filed to prevent the statue from being moved.

“That statue represents Confederate soldiers both black and white. They didn’t die to protect slavery, they died protecting their life. They were not slave owners, most were poor farmers,” said Tammy Jennette. “If you take that statue down you are spitting on their graves and Pitt County’s rich southern history.”

Others said the argument that Confederate soldiers were traitors is wrong because the Southern states had formed their own nation and were defending it.

Another argued that the South wasn’t responsible for slavery, it was driven by northern traders and the British.

Others used their time to label Black Lives Matter as a terrorist organization and to criticize the removal as part of a leftist and liberal agenda.

One woman, who supported moving the statue, said “It has been painful for me to listen to some of the things I’ve heard her tonight,” adding she was thankful she had a mute button.

When the discussion began, Nunnally made a motion to immediately remove the statue even before staff made its presentation.

White then made a substitute motion to remove the statue once a new location was found.

That motion failed 7-2 with White and Coulson voting to wait until a new location was identified.

In a written statement to staff, Nunnally had suggested moving the statue to Alice F. Keene Park, making it part of a larger historical display.

Minerva Freeman, who supported the move, didn’t like that suggestion.

“Why would we want our young families to see it there,” she said.

Several speakers recommended moving the statue to the Eastern Carolina Village of Yesteryear, which is located nearby.

The collection of historic structures is privately operated and the organization’s board of directors would have to agree to accept the statue.

Prior to the vote, Elliott said he is declaring the statue a public safety threat, “creating dangerous condition for the property, law enforcement and citizens of the community.” The statue has been vandalized with paint, courthouse property has been vandalized, requiring barricade to be erected around the building, flag poles were damaged and a flag was burned in the street beside the monument.

“Over the last weeks we had violence and riots in downtown Greenville, uptown Greenville, around the monument and the courthouse resulting in significant property damage. This was to the extent that the National Guard and many other law enforcement agencies responded to provide protection,” Elliott said. “All these conditions leave me to believe the statue poses a threat to public safety because of these unsafe and dangerous conditions.”

After voting to remove the statue, the commissioners voted to have Commissioner Melvin McLawhorn work with staff to form a committee to select a new location for the statue.

Also during Monday’s meeting the board voted 5-4 to approach Greenville officials to discuss expanding the city’s Human Relations Council to address issues in the county’s smaller towns and unincorporated areas.

McLawhorn, Nunnally and Commissioners Alex Albright, Michael Fitzpatrick and Ann Floyd-Huggins voted to approach the city and Coulson, White and Commissioners Beth Ward and Mary Perkins-Williams voted against it.